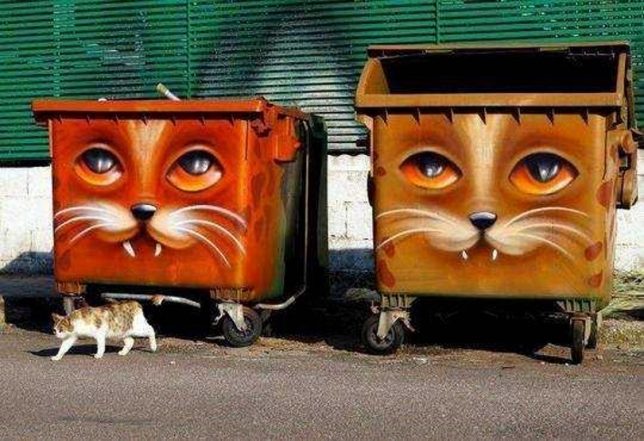 “Taggers and graffiti artists tend to look upon blank surfaces such as walls, dumpsters and telephone junction boxes as blank canvases just waiting for their spray cans to transform them into calling cards for the local gangs,” according to NICP (National Institute of Crime Prevention). At the same time, taggers tend to respect the work of others out of “professional courtesy”, prompting both public and private stakeholders to get there first. Case in point: the above colorful Cat Dumpsters intended to deter taggers though at least one actual cat doesn’t appear to be impressed. 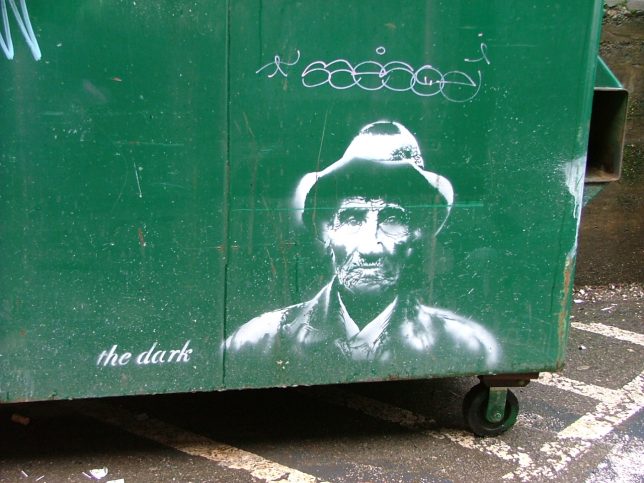 Is that Harry Dean Stanton? Stencils don’t come much more intricate and evocative than this one, applied to the side of a dumpster in Vancouver, Canada. Only white paint is used by the artist (possibly Chris Stain), who lets the dumpster’s typical industrial green paint act as a contrasting background. Flickr member George Oates snapped this “dark” example of urban art in late 2004.

One In A Brazilian 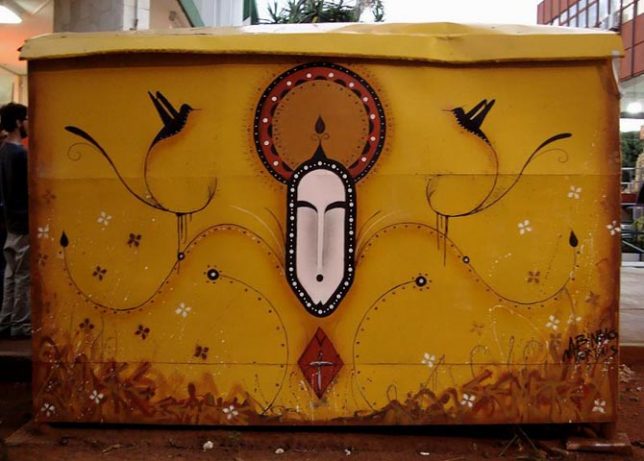 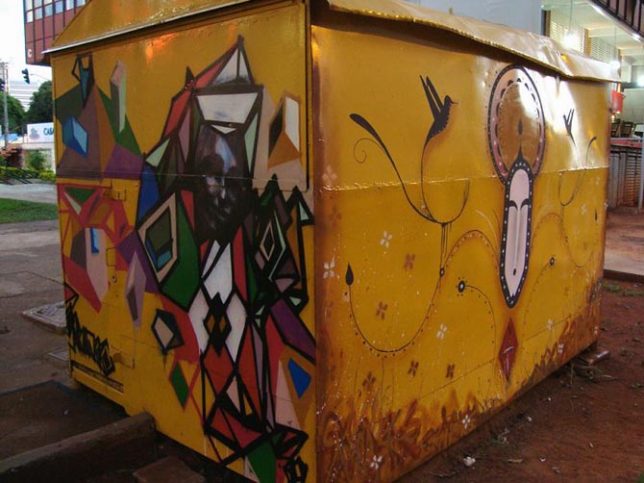 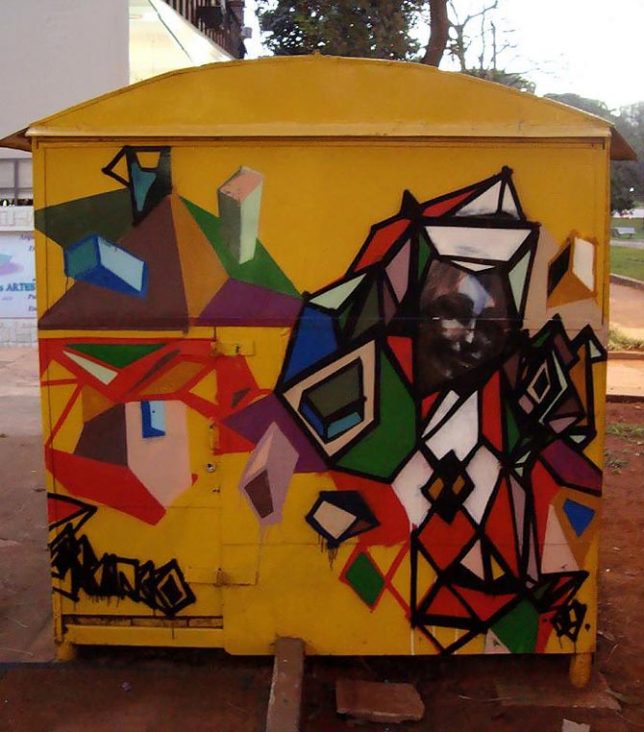 One man’s trash may be another man’s treasure but Brazilian street artists Binho Martins and Rodrigo Obranco have combined the two to best advantage. Though bruised and battered by a life of hard knocks in Brazil’s capital city, Brasilia, this beautiful dumpster shines like an ornate jewel box thanks to Martins’ and Obranco’s artistic efforts. 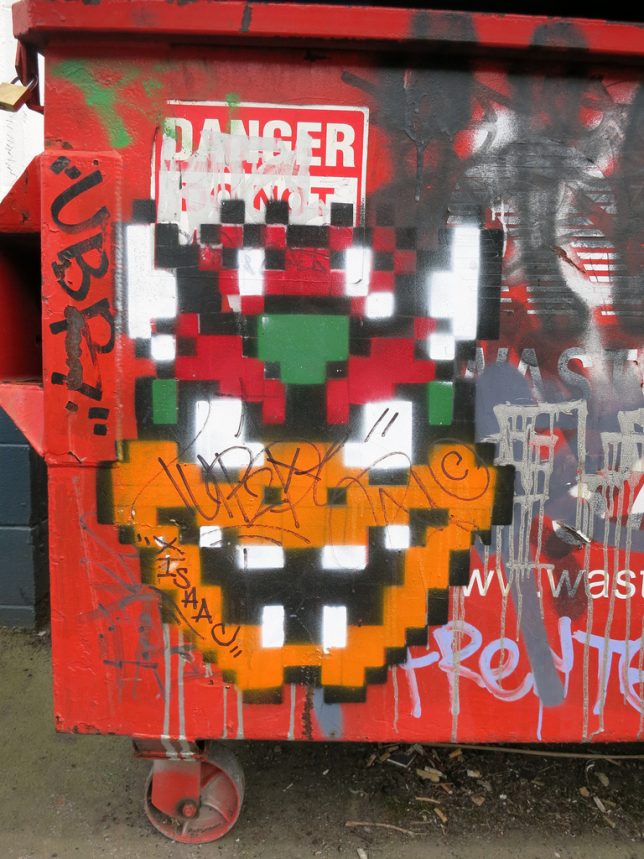 Note the diffused style of this 8-bit-inspired stencil applied to a bright red dumpster in Auckland, New Zealand. As photographed by Flickr member wiredforlego, the work takes on an almost 3D aspect when contrasted with the tagging beside, beneath and on top of the five-colored stencil. 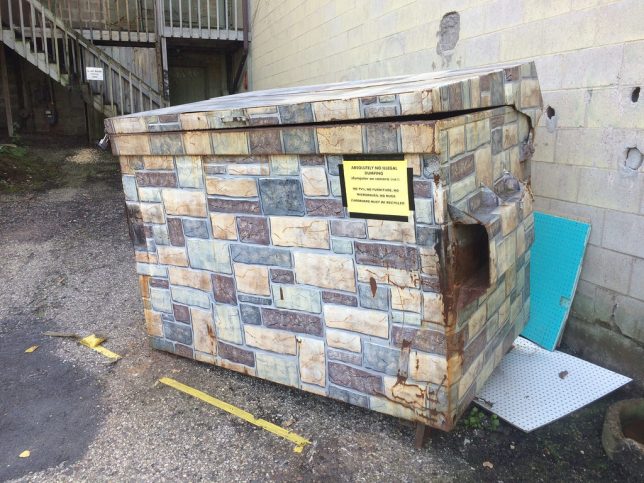 Y’know, if your local dumpster blends in with the rest of the neighborhood, maybe your neighborhood is, well, a dump. Just sayin’. Anyway. this isn’t just a tatted up (and possibly wallpapered) dumpster, it’s a seriously discriminating one as well. As per the affixed sign, users are forbidden to dump cardboard, furniture, rugs, TVs or microwave ovens… and the dumpster is “on camera 24×7” so don’t try anything, buster! A tip ‘o the cap to Flickr member mndsi who snapped the snazzy faux-stone bin in late 2015.