Your sweaty neighborhood gym has nothing on these beautifully designed fitness facilities full of multi-story climbing walls, skybridge pools, dramatic boxing rings, nightclub-style lighting and cool typographic murals. It looks like the architects and designers had as much fun dreaming up these beautiful modern fitness centers as clients get to have using them. Do yoga in a glass box overlooking Manhattan, lift heavy in a former communist monument, test your arm strength in the world’s largest bouldering gym or kickbox in a room that looks like a sci-fi movie set.

Wellness Sky in Belgrade, Serbia by 4of7 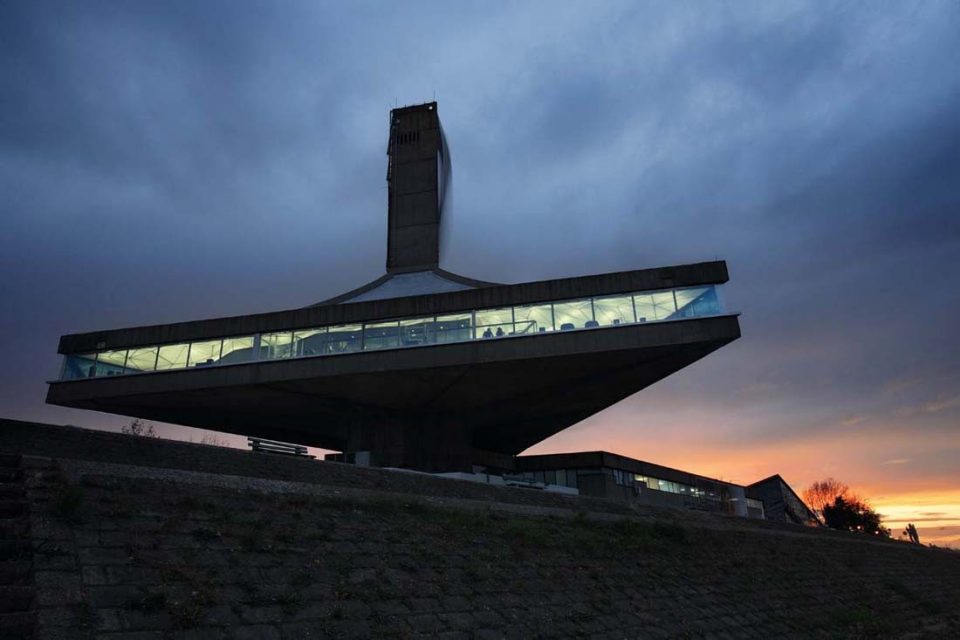 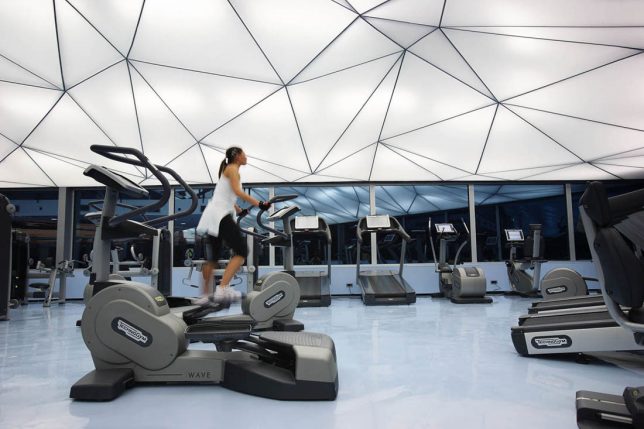 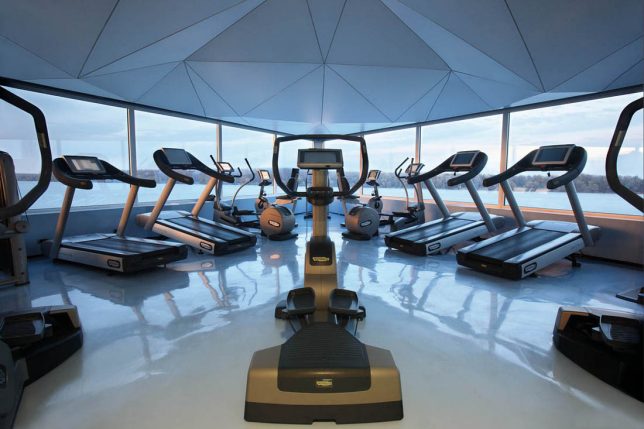 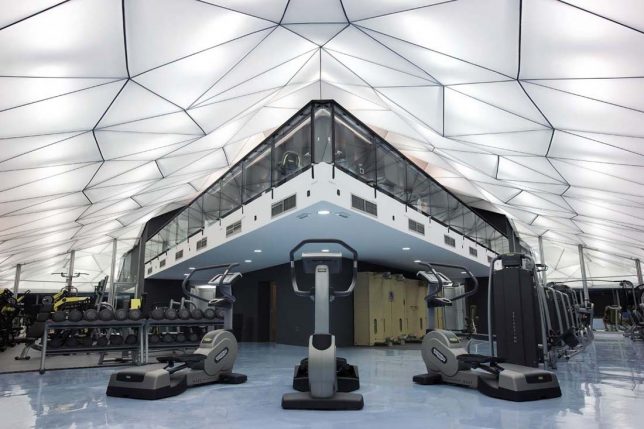 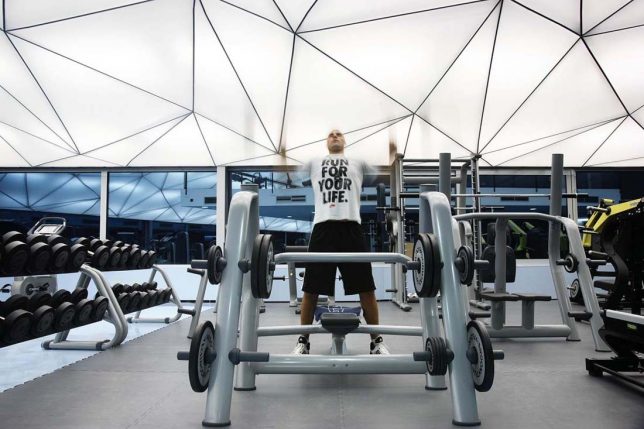 ‘Wellness Sky’ is a pretty good name for a glassy triangular building cantilevered over a river and pedestrian esplanade in Belgrade. The building began as a communist monument known as the ‘Danube Flower,’ but lay abandoned throughout the 1990s during the Yugoslav wars. Today, its exterior looks much the same, but the interiors by firm 4of7 are transformed, with the backlit, faceted semi-translucent Barrisol stretched ceiling brightening up a fitness facility. 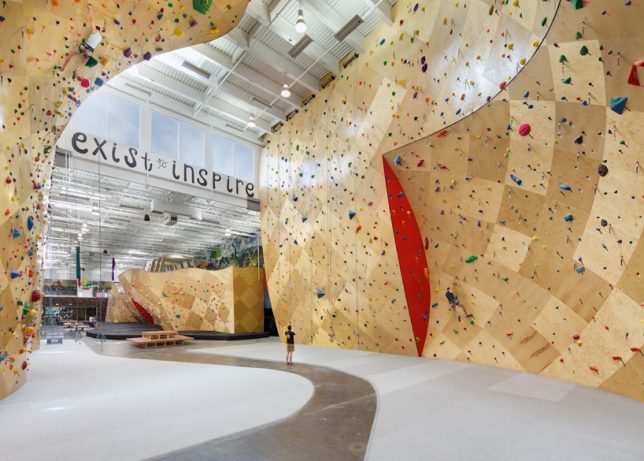 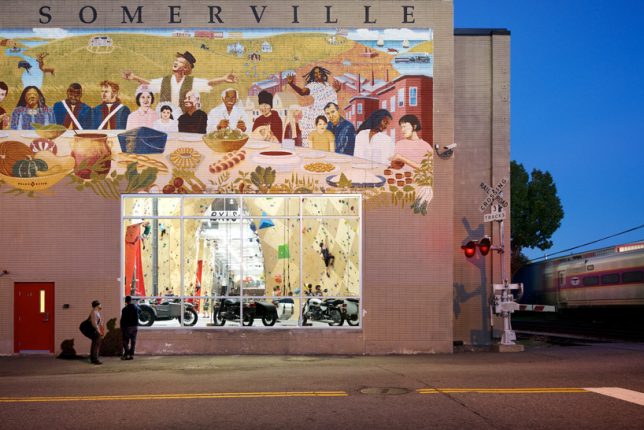 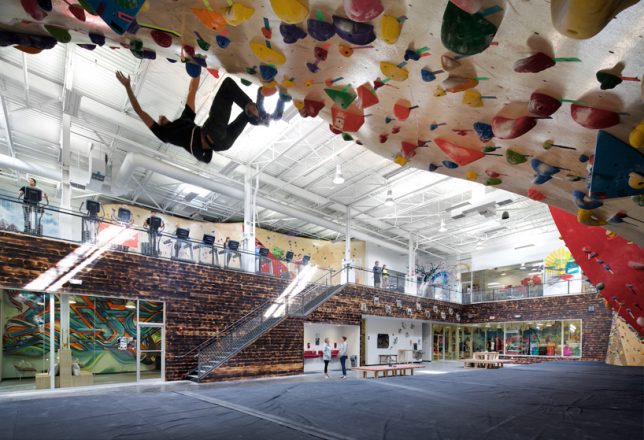 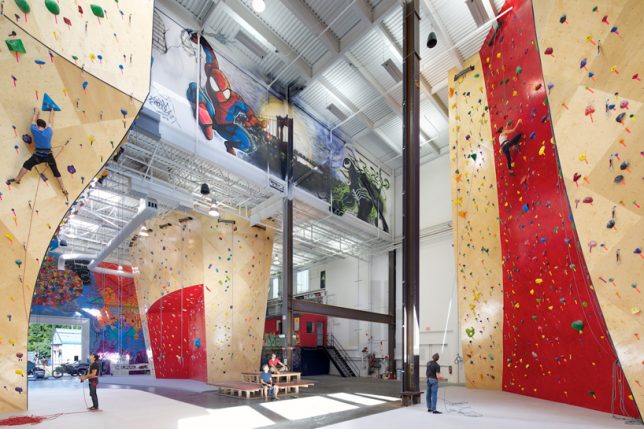 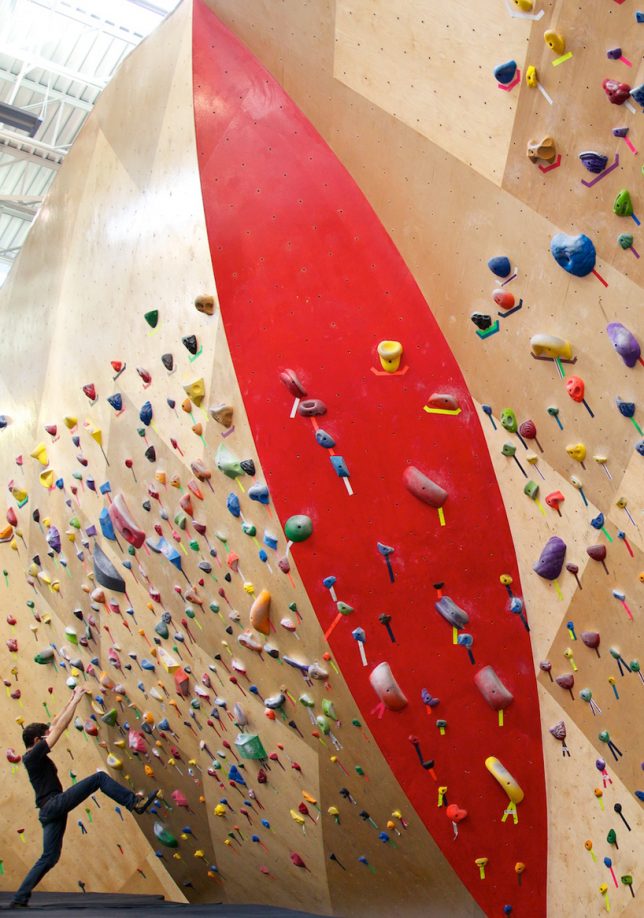 Doesn’t this look like fun? Graffiti from local artists encourages you to find your strength at the Brooklyn Boulders facility in Somerville, Massachusetts – which is actually an unusual take on the co-working environment, seeking a balance between work and play. The facility hosts the usual work tables, but they’re a pretty minor feature compared to the 40,000-square-foot rock climbing wall that reaches all the way to the ceiling. 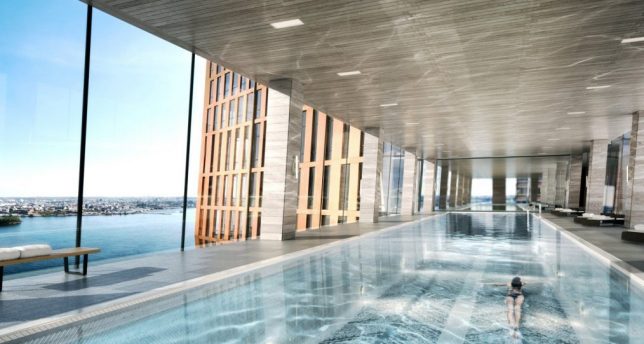 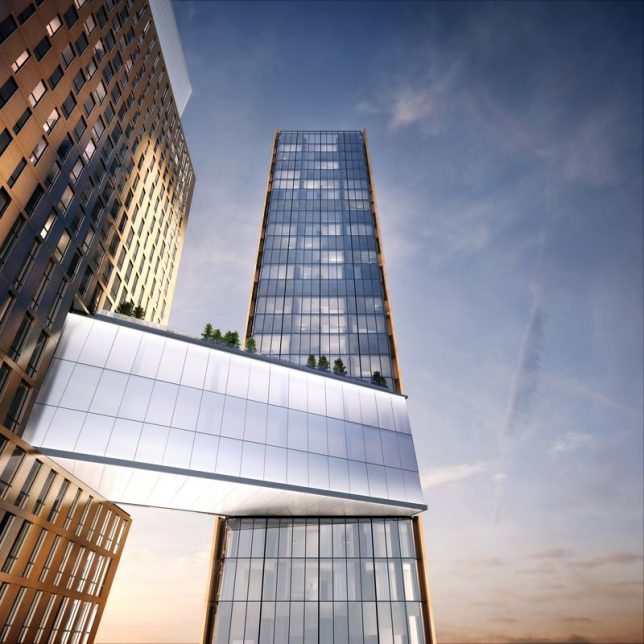 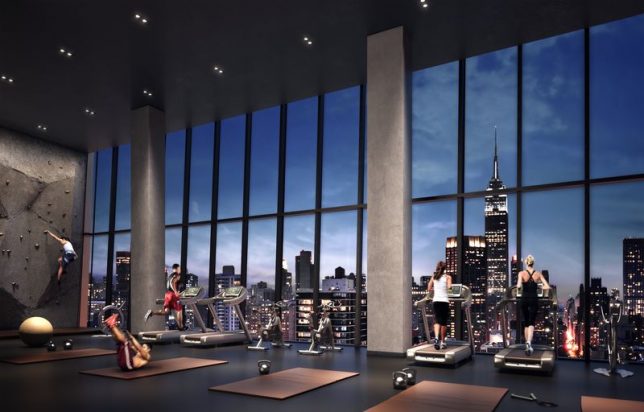 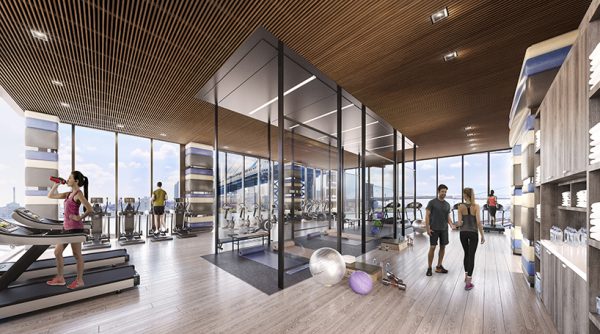 What’s inside the skybridge connecting America’s tallest copper towers? A double-height fitness center with enviable views of New York City. This skybridge at SHoP’s residential towers, known as the American Copper Buildings, contains a 75-foot lap pool overlooking the East River, a climbing wall and a fitness center as well as a hot tub, bar and lounge.

The Burrow: Boxing Gym in Kuwait by Lab 100 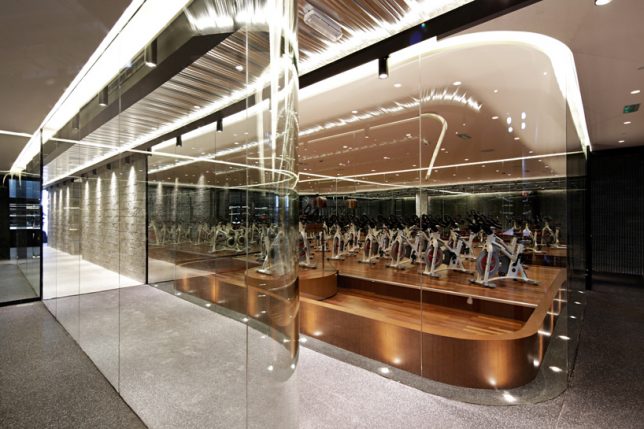 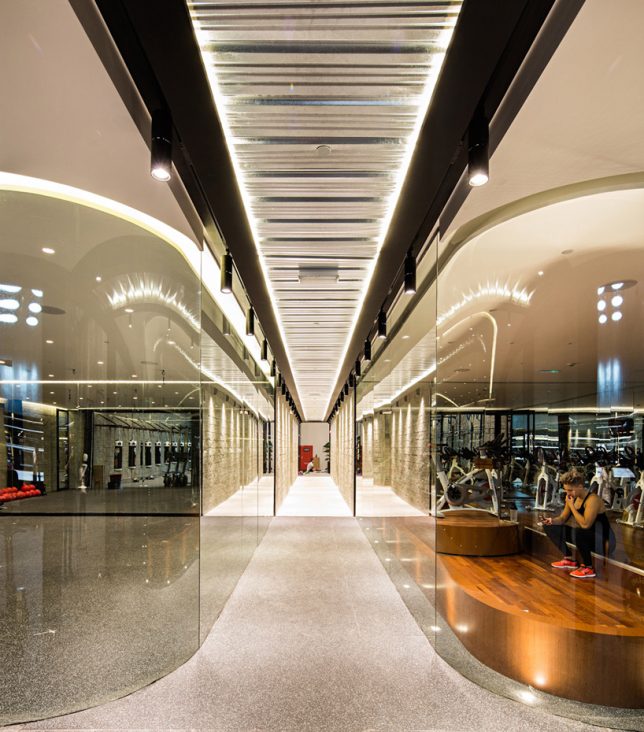 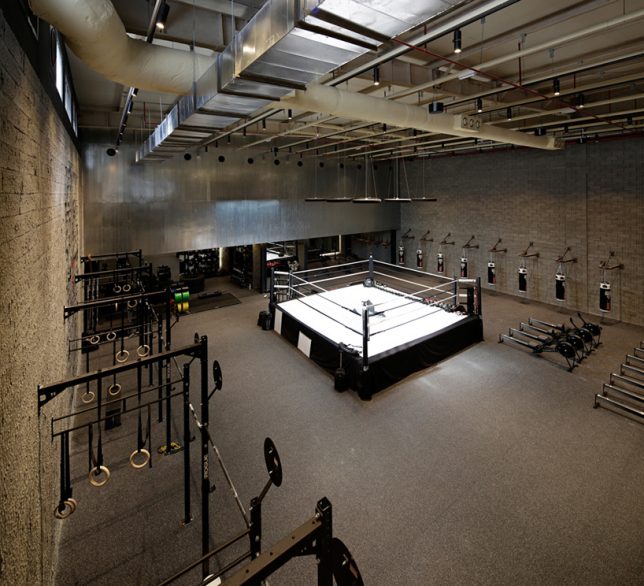 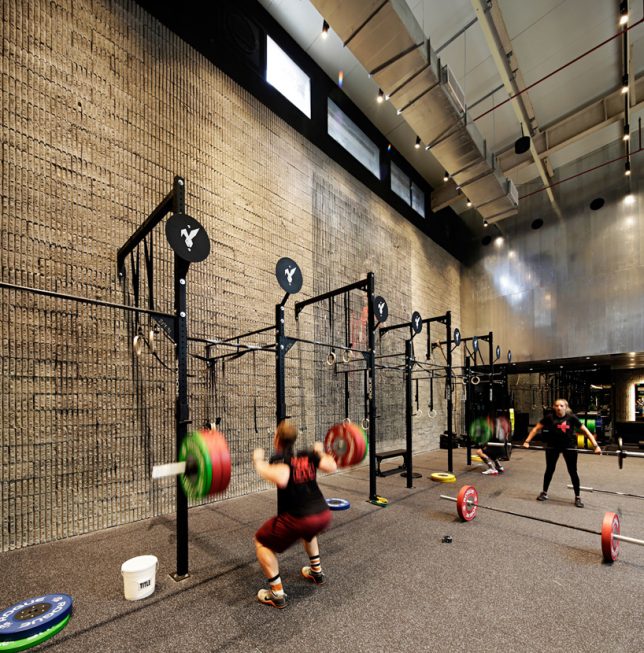 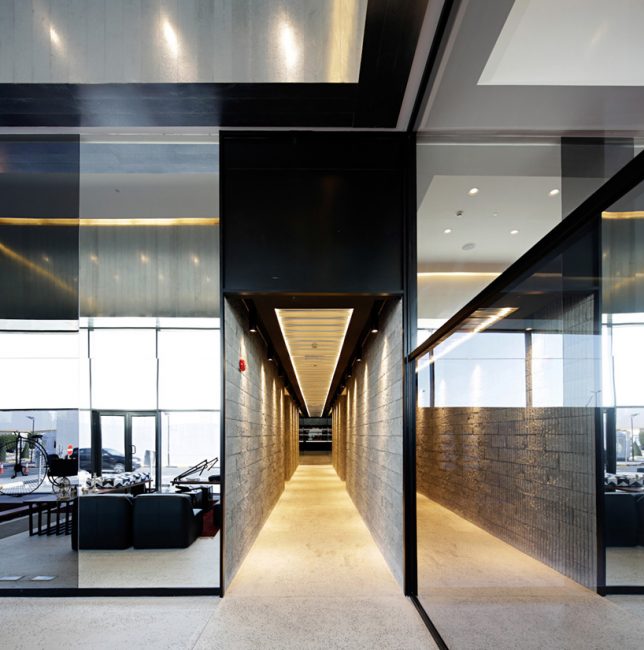 Sabhan, Kuwait gets its first commercial boxing gym in the form of ‘The Burrow’ by Lab 100, a beautifully designed facility full of semi-private workout halls, a huge boxing room and an elevated crossfire area. “While designing the space, the key factor was in emphasizing a natural flow of movement and the element of surprise,” say the architects. “In order to reach the workout area, members have to take a narrow corridor, passing by the locker area and into the main workout hall. In contrast to the corridor, the spacious workout area embraces an elevated boxing ring in its center. The boxing ring is dramatically lit with nine pendant lights to highlight its importance in the facility.” 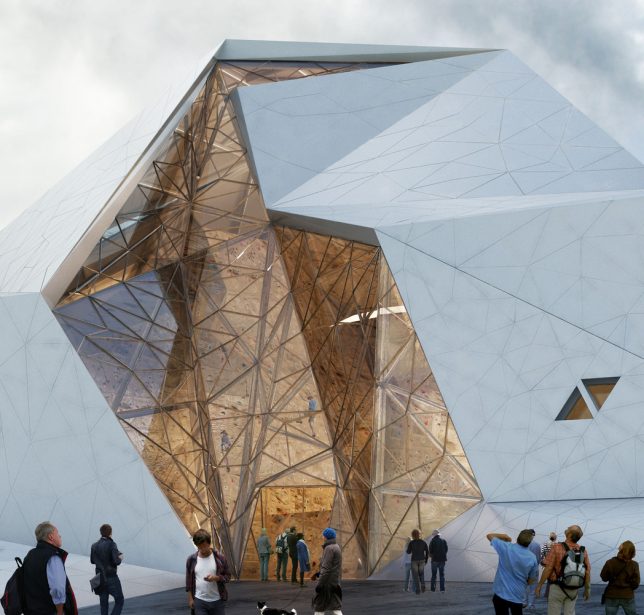 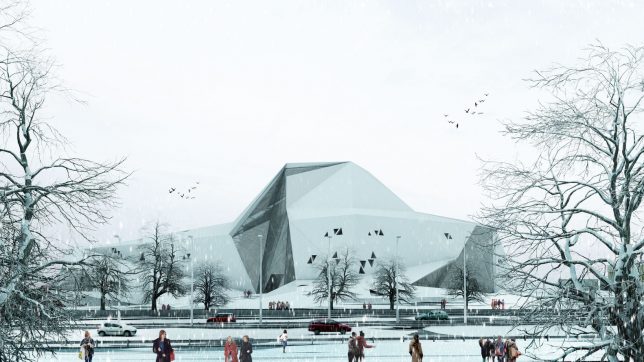 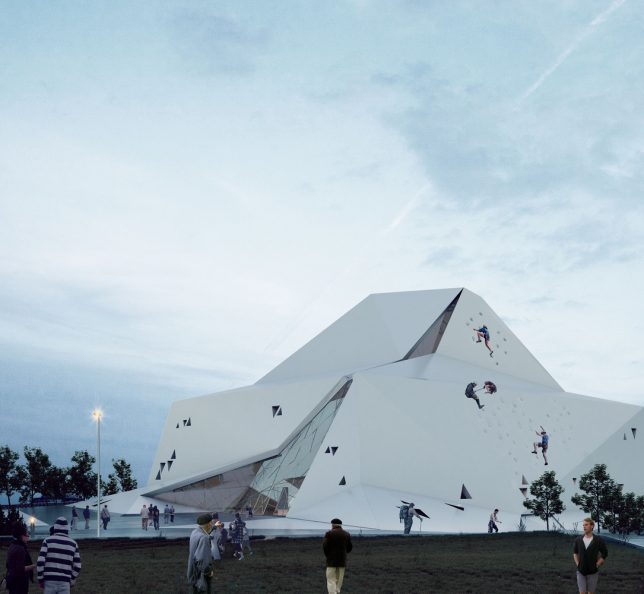 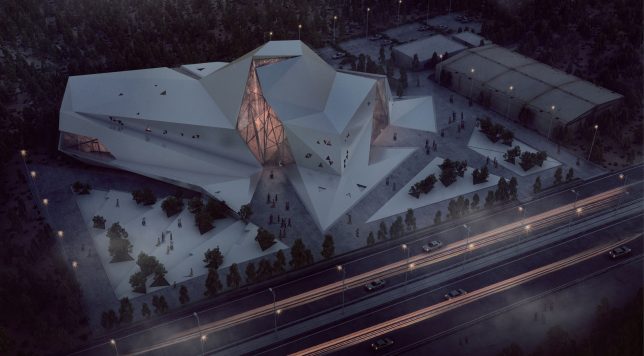 The striking exterior of this facility in Iran sort of looks like a rock cracked open to reveal a geode inside, a fitting aesthetic choice for a huge climbing gym with boulder-like interior walls. New Wave Architecture found inspiration in the large-scale movements and tectonic forces of the earth’s crust for the design, which also enables climbing up the exterior.