Tirana soars wrecks, anyone? The Kucove Air Base in south-central Albania houses dozens of historic Soviet aircraft dating back to the time of the Korean War. 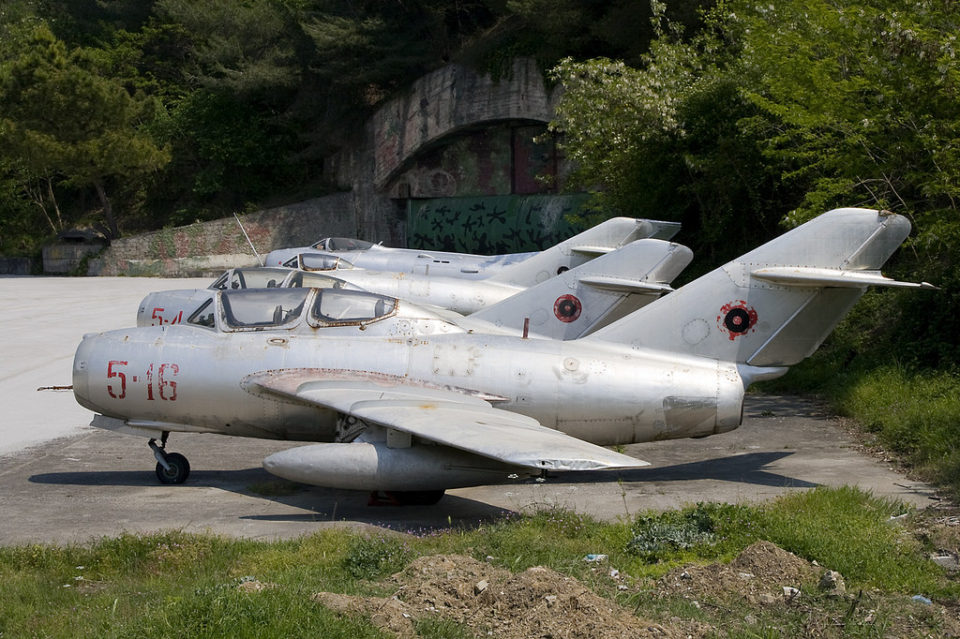 Kucove Air Base, built in the Cold War years of the early 1950s, was quite advanced for its time. A trio of underground hangars carved out beneath nearby mountains and linked to the main runways by dedicated taxiways offered unprecedented security from potential NATO air raids. It’s no wonder dozens of Soviet- and Chinese-built jet fighters were based at Kucove… it’s definitely a wonder that in October of 2018, no less than 88 obsolete MiG fighter jets could still be found at the once state-of-the-art Albanian aerodrome! 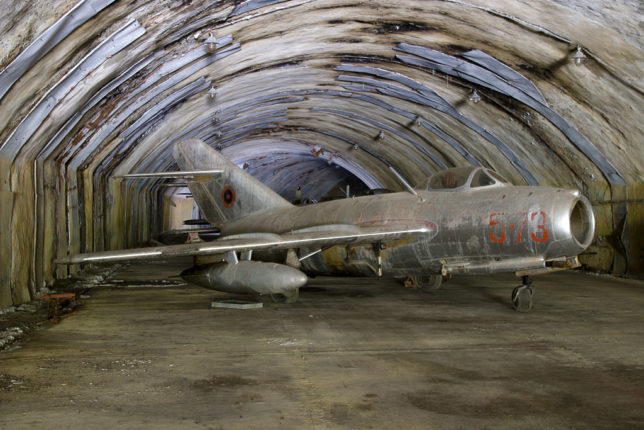 In 1997 the base was captured by rebels during the Albanian Crisis (a civil war prompted by the collapse of nation-wide, government-sponsored Ponzi schemes). Both the aircraft and base’s infrastructure incurred damage and vandalism; as many as seven MiG jets were destroyed and their parts sold on the black market. Damage to the base was not completely repaired until the 2002-2004 renovation to NATO standards. The country officially joined NATO on April 1st of 2009… no foolin’. 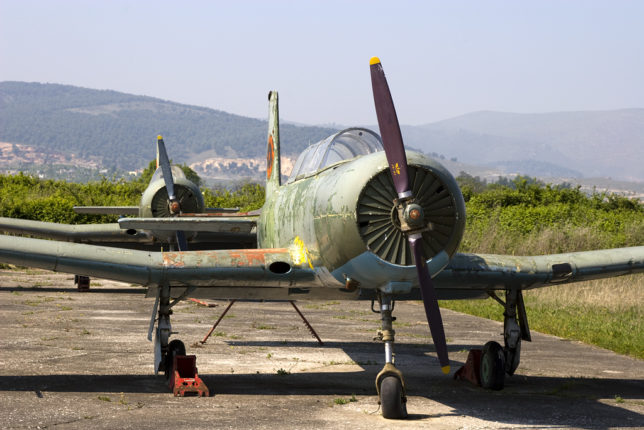 In 2005 the Albanian Air Force retired all 224 of its various MiG jets, including Shenyang J-5 and J-6 fighters (MiG-17 and MiG-19 jets built under license in China) and even a few propeller-powered trainers purchased in the late 1950s. The planes were mothballed but not immediately replaced, as Albania’s NATO neighbors Greece and Italy began monitoring the country’s airspace. 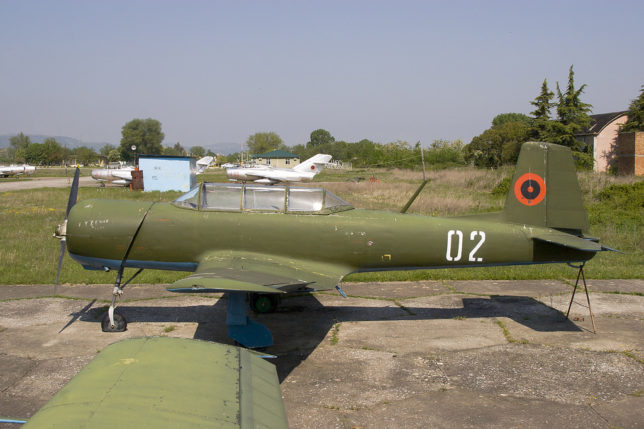 From the time Albania retired its MiGs and MiG-variants, efforts have been made to auction the decommissioned airplanes, either individually or in batches. These images snapped by Flickr member Rob Schleiffert in April of 2007 show Kucove Air Base and its rolling (but not flying) stock in various states of completion. 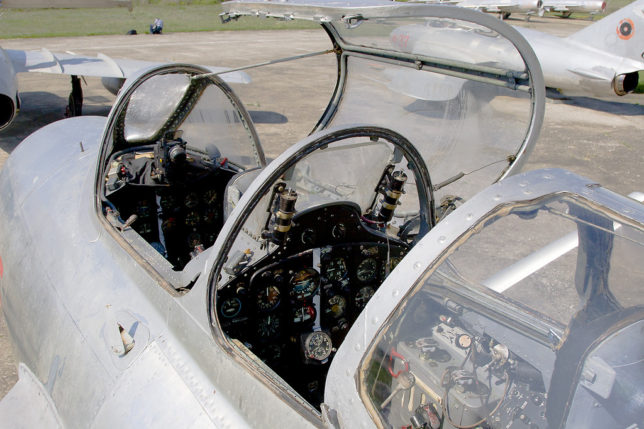 Many of the jets, including rare trainer versions, are in excellent condition considering their advanced age and the increasing difficulty of sourcing replacement parts. This may be a function of the corrosion-resistant aluminum alloys used in their construction combined with minimal actual hours in service – Albania withdrew from the Warsaw Pact in 1968 and as such, did not participate in the East Bloc’s frequent exercises.

Guerrillas in the MiGs 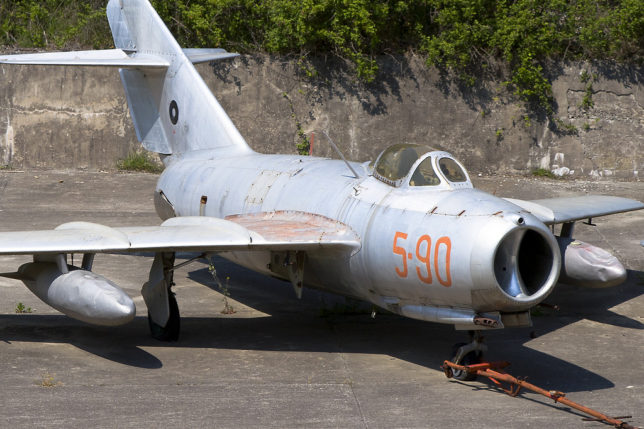 By 2007, Kucove Air Base was looking a tad rough around the edges as funding from Albania’s impoverished government was severely rationed. Retirement of the country’s air force (and the withering of support services) had a correspondingly deleterious effect on the region’s economy as well. Authorities began to explore a range of solutions that went beyond the sales of obsolete aircraft. 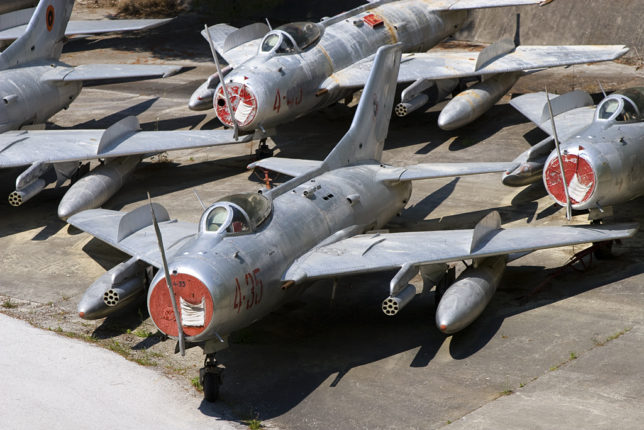 Finally, in August of 2018, a deal was struck with NATO allowing the organization to modernize Kucove Air Base and subsequently use the base for training, support, logistics, drills, and supply storage. NATO’s footing the bill as well – someone tell President Trump – and the agreement will see an initial investment of 50 million Euros. “The base is the first footprint of NATO in the Western Balkans,” stated Albanian Defense Minister Olta Xhacka to Reuters, “as it will transform Kucova into the first NATO air base for the region.” 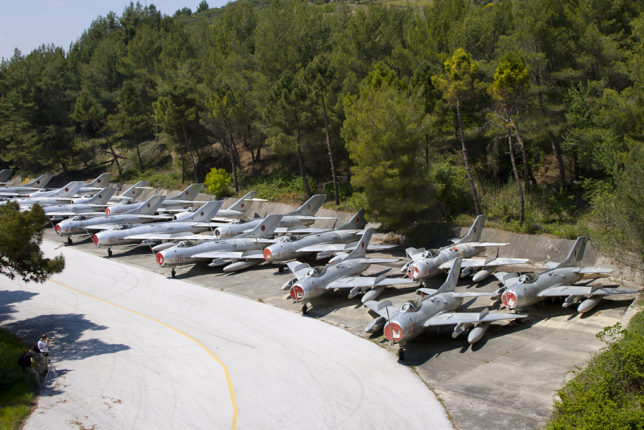 “A NATO base there will boost the country’s defense capacities, and foreign investors will have more confidence in Albania,” according to Klement Alikaj, a 68-year-old retired Albanian Air Force commander. “It will also be good for employment in the area.” All well and good but the future doesn’t look quite as rosy for the base’s 88 remaining MiG, Shenyang, Yakovlev and Nanchang aircraft, however. Expect NATO planners to expedite the auctioning-off and scrapping of the old war-horses – there’s truly never been a better time to acquire a vintage Cold War jet fighter!