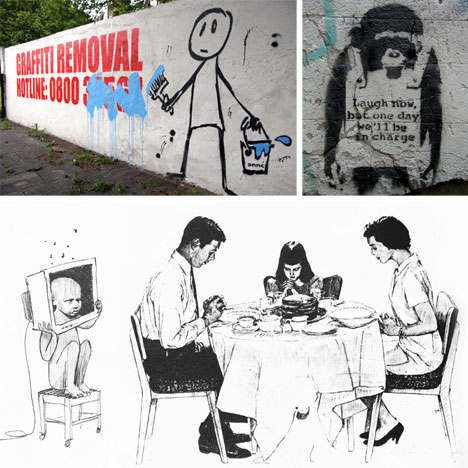 (images via: Banksy.co.uk and Art of the State and Brighton Arts Blog)

Say what you will about the legality and morality of graffiti; it is difficult to argue that it is not at times real art. The care and forethought that goes into some graffiti and street art is apparent. Banksy is an artist who has risen to a strangely anonymous brand of fame with his graffiti, most of which involves stenciling. But there are many sides to this elusive culture-jamming artist, and his drawings, which are seen by far fewer people, are just as provocative as his large outdoor pieces. Some of his earliest works are still debated while others have become collectors items sold at up to six-figure prices. This is part two of our eight-part guide to Banksy Art and Graffiti. 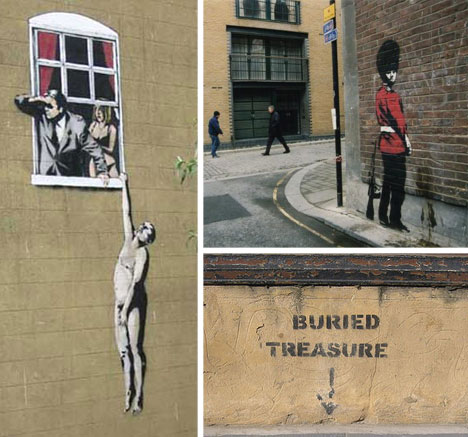 (images via: InventorSpot and Onzin and Wooster Collective)

Even if Banksy hung up his spray paint cans and stencils forever today, he would always be known first and foremost as a graffiti artist. When he began as a lad in Bristol, his creative artwork graced the sides of buildings near his home. Now Banksy originals can be seen on walls all around the world. One of his most famous pieces was of a nude man hanging by one hand from a window as a jealous husband scans the street and a guilty wife stands by. The artwork went up on a wall in Bristol near the City Council office. When the city asked the public whether the mural should stay or go, an overwhelming 97% said that they wanted to see it stay. The city agreed and the mural was not removed. 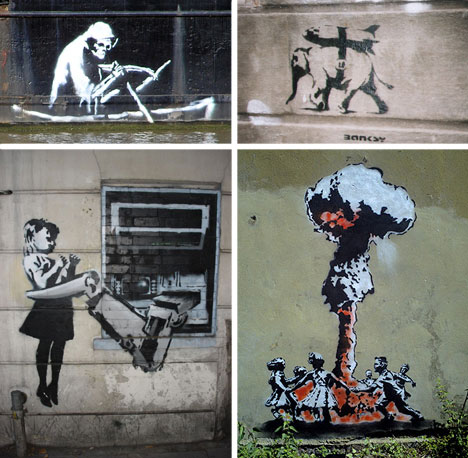 Because street art is usually considered a crime, artists have to work quickly. One of the best ways to do that is to use custom stencils. You do most of the work ahead of time by creating the stencils, then when you get to the site of your future art, you simply hold the stencils up and spray away. This is the style of art that’s most often associated with Banksy. Some of them are simple and probably went up very quickly. Others are quite complex and involve several layers and many colors. 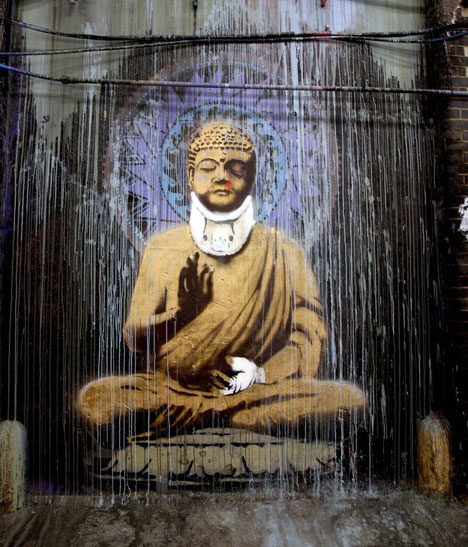 Never let it be said that the reclusive street artist doesn’t play well with others. In May of 2008, Banksy was involved with other street artists from around the world in The Cans Festival. The three-day art extravaganza saw artists flocking to an underpass on Leake Street in London, armed with stencils and spray cans and a desire to cover every available surface with art. (And this time, they had permission.) 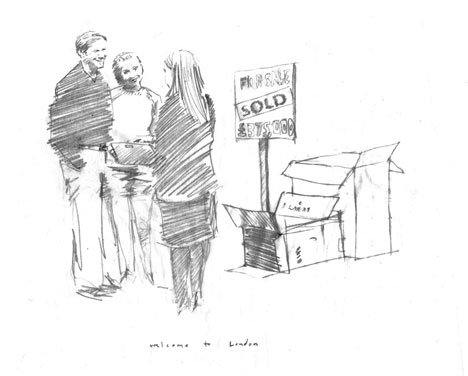 Banksy’s talent and his message extend from urban art into the more traditional paper-and-pencil territory, as well. Although it’s somewhat rare to find a Banksy drawing, the few available examples all convey his signature observant-but-not-preachy style of subversion. 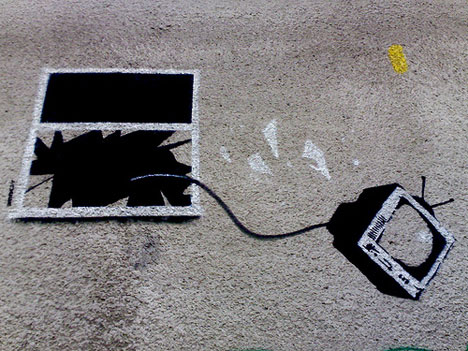 The multi-talented artist has been keeping us entertained for a decade, but from a distance. Now that Banksy is gaining popularity all over the world, how will his art speak to his newly-formed fan base? And how will the artist handle his crumbling sense of anonymity? It seems unavoidable that his identity will eventually be revealed to the public (and some would say it already has). Until then, we can continue to search the city walls for that prized quarry: the original Banksy. Banksy Part 1: Who is the Infamous Street Artist Banksy?