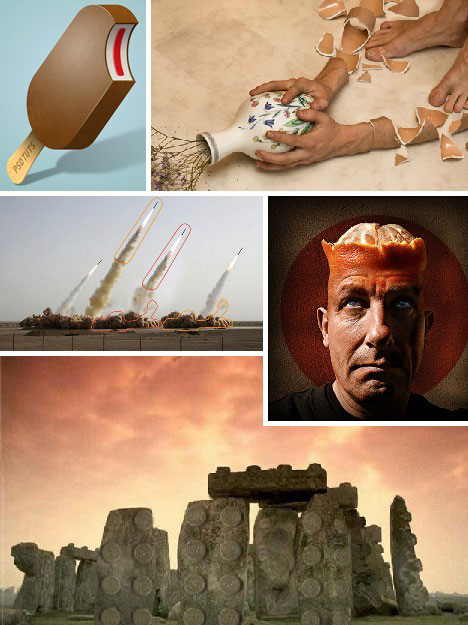 “This looks shopped. I can tell from some of the pixels and from seeing quite a few shops in my time”… This classic 4chan meme captures in one sentence the pomposity and ignorance of countless self-styled image critics. There’s a nugget of truth in that annoying meme, however – poor ‘shops ARE obvious, even to 4channers. The better ones, on the other hand, can be mind-boggling. Here is a selection of great and notorious photoshopped images guaranteed to provoke wonder, amusement and eyestrain. 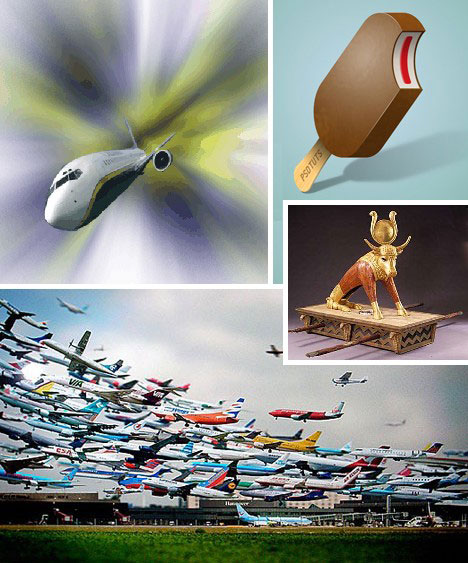 Many works of photoshop art pump up the details in a source image to the point of sensory overload – and that’s a good thing. The selection above applies a little ‘shop shock & awe, just enough to nudge the subject into that odd area just beyond reality.

How Swede It Is 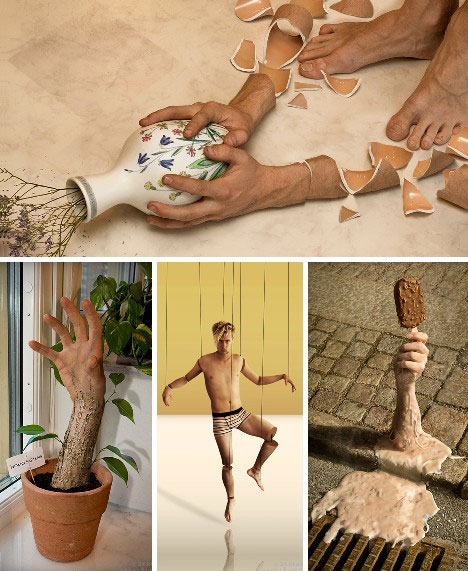 The cool thing about photoshopping, or digitally modifying photographs if we want to be technical about it, is that our brains naturally want to believe what our eyes are seeing. The content may be wrong but the look is right. Sweden’s Erik Johansson is a master of this technique, as the above montage and his other works clearly illustrate. 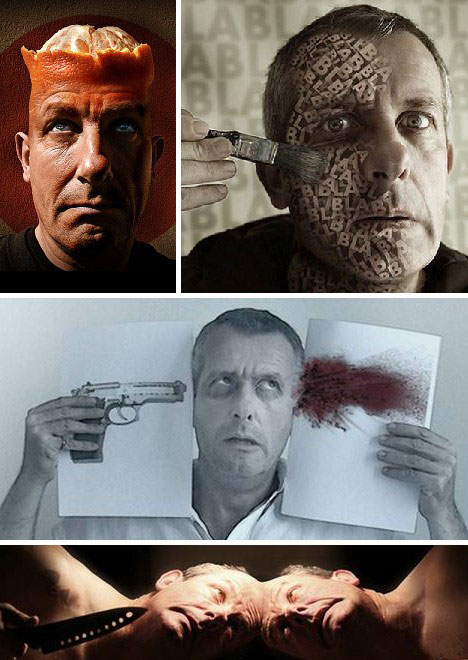 Like Erik Johannsson, Pierre Betielle is another expert photoshopper who feels he’s his own best subject. The French photo finagler takes the visual medium and forces it into extra-large territory, with we viewers along for the wild ride. 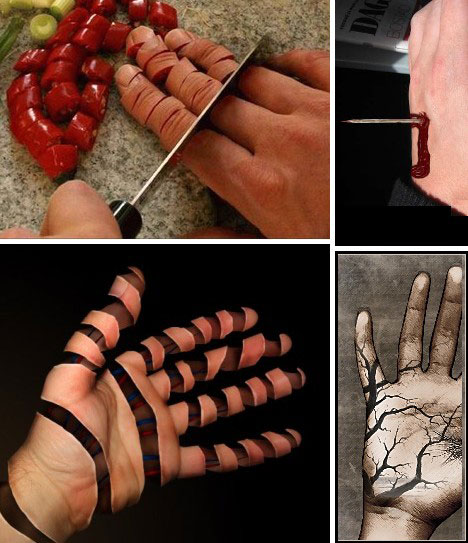 Incongruity in imagery – the above samples say it all. As scary as some of these images are, what’s more frightening is wondering who thought up the concepts, and why? The above set focuses on our hands, so sensitive to the slightest touch or the merest paper cut. Regarding the latter, welcome to what must be a New Order of pain… how does it feel? 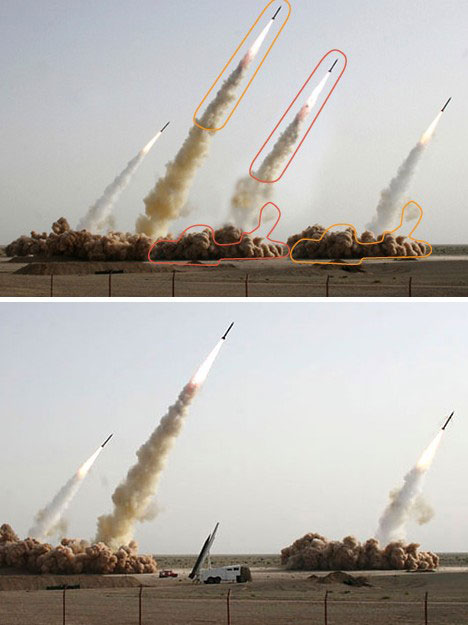 (images via: Osmoothie and The New York Times News Blog)

You can’t appreciate the good until you’ve seen the bad… An entire nation doesn’t put its foot in its mouth too often but the Islamic Republic of Iran isn’t just any nation – they’ve done it twice, thanks to a couple of ambitious yet amateurish photoshopped images that have received wide dissemination. The first, above, supposedly depicts 4 missiles launched in unison and many reputable news organizations rushed it to press. Not so fast, newsies – according to AFP, “The fourth missile (the one second from the right) has apparently been added in digital retouch to cover a grounded missile that may have failed during the test.” A missile fail and a photoshop fail, that’s today’s 2-for-1 special. 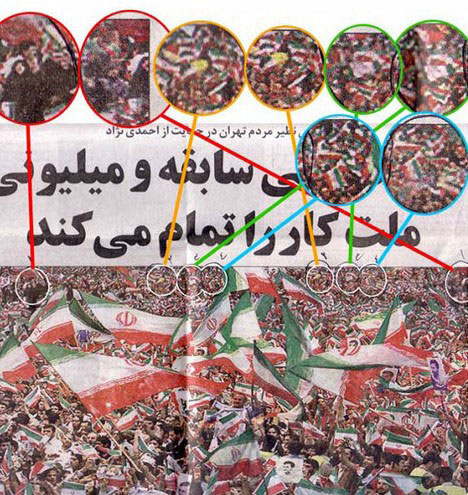 (images via: Daily KOS and UPI)

Oops, they did it again. Iran’s serial president Mahmoud Ahmadinejad is wildly popular in his home country: 62 percent of the voters can’t be wrong, right? Such a political rock star should have no trouble whatsoever in leading huge rallies, yet there’s trouble in Persepolis… not enough warm bodies in the background. Call in the Revolutionary Photoshop Brigade! 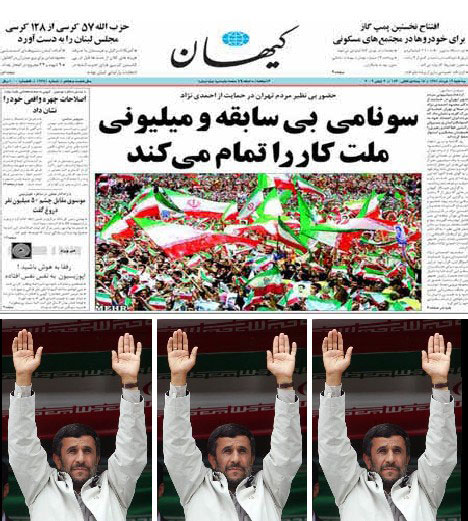 (images via: Daily KOS and UPI)

Unfortunately the powers that be must have grabbed some Mystery Shoppers instead of the expert ‘shoppers they were looking for. The result just adds further fuel to the fire that’s swiftly burning away any residual legitimacy in those who pull the strings, er, hold the reins of power in Tehran. 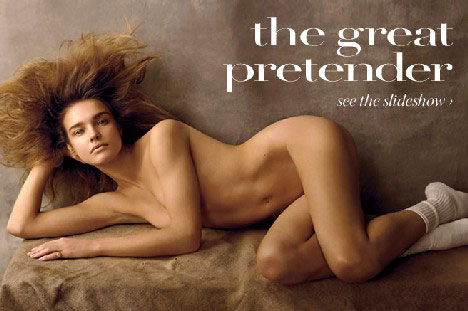 The Persians have no monopoly on photoshop disasters. Slipshod ‘shopping is so common, in fact, that someone put up a website – called Photoshop Disasters, if you must ask. Take the prime example above: “As a Russian,” says Natalia Vodianova, “I love drama.” Not to mention comedy, it would seem. 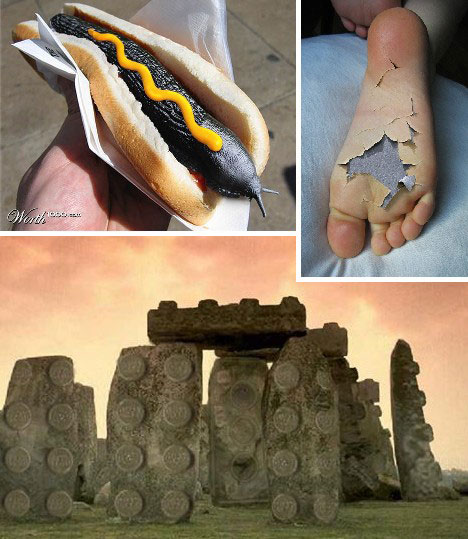 Now back to the good stuff. Best known for its popular photoshop contests, Worth 1000 has been amazing and amusing appreciators of fine photo manipulation since 2002. The site, founded by Avi Muchnick and Israel Derdik, runs a number of discussion forums that offer both experienced ‘shoppers and newbies a valuable resource for tips and techniques. Unlike some other, more freewheeling forums, those at Worth 1000 are actively moderated and filtered providing a high degree of troll control. 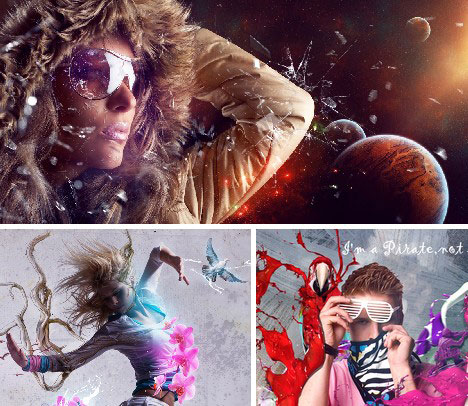 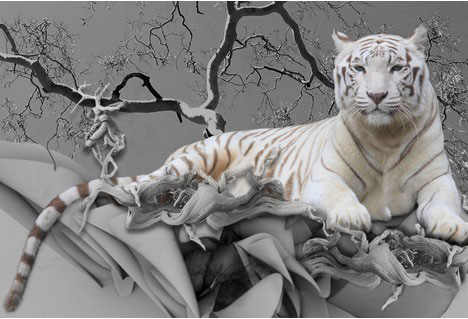 Portuguese digital artist Roberto Gamito, who goes under the nom de ‘shoppe “rgquarkup”, is a rising star on the photoshop scene. Gamito’s compositions evoke an ethereal, otherworldly atmosphere that some may find romantic, others disturbing, and Goths a combination of both – in other words, perfection.

That’ll Be One Starbuck 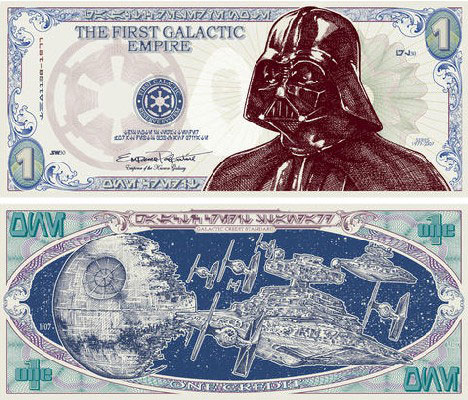 How does one pay for a Vente Frappuccino at the cantina, anyway? With a Starbuck, of course! Mark Brooks whipped up this tasty bill, er, Darth, for the 2007 Star Wars Fan Days event. By the way, Mark, what do you think Lord Vader would do if he caught you counterfeiting Empire currency, hmm? 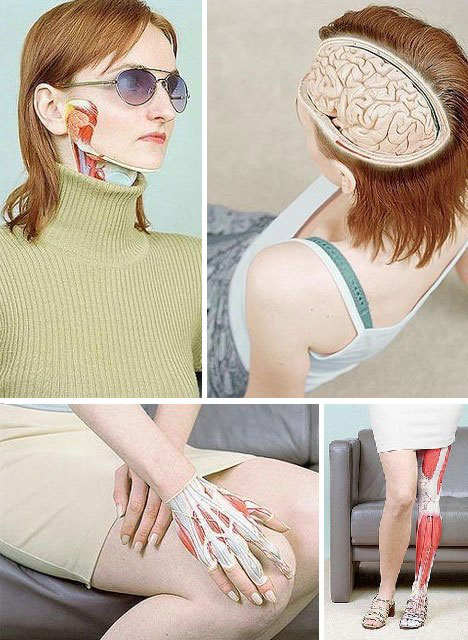 Koen Hauser has racked up a significant body of work – with the emphasis on “body”. Hauser’s compositions resemble Motor Trend car cutaways, without the cars. What’s perhaps most odd is that his subjects look so calm and collected – while the rest of us are freaking out! 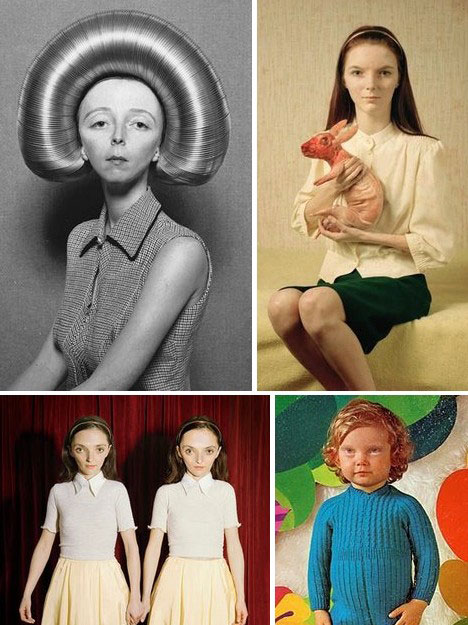 Above are some other works by Hauser; no anatomical cutaways this time but certainly disturbing in their own right. Or wrong, as the case may be.

Tricks Of The Trade 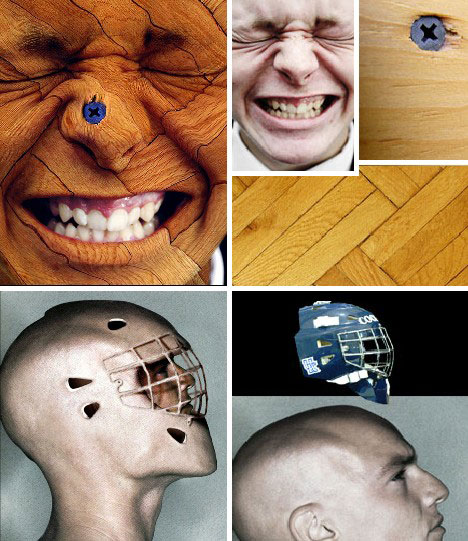 Wondering just how the masters of manipulation work their mojo? The above montage gives an inkling, care of Joan Charmant. A software engineer by day, Charmant twists reality by night: “I started photo montage in 2004, when I stumbled upon UFO pictures and wanted to see how hard it would have been to fake.” Not all that hard, if you’ve got the right software and an active imagination!