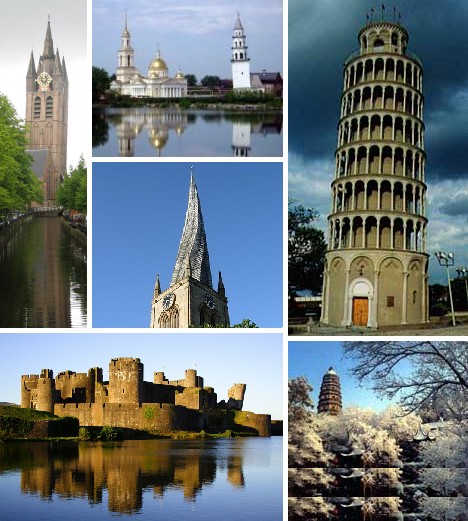 Just as there’s more to food than pizza, there’s more to leaning towers than Pisa. These 13 slanted spires show that staying on the straight & narrow isn’t all it’s cracked up to be; though if gravity has anything to say about it, cracked up is destined to be their ultimate fate. 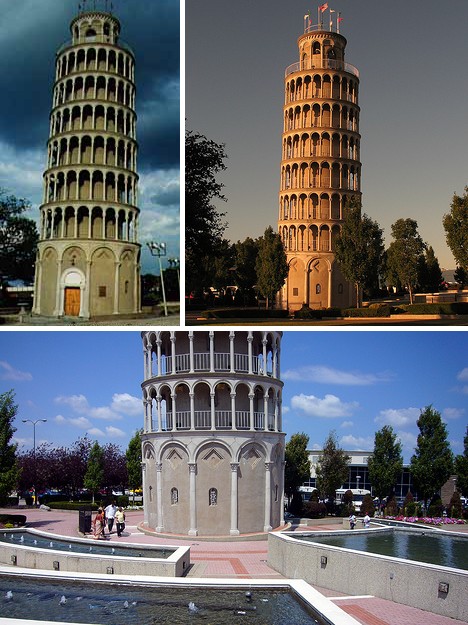 It may sound like the title of an episode of Frasier but The Leaning Tower Of Niles actually does exist, and has done so since 1934. A half-sized twin to the mother of all leaning towers in Pisa, Italy, the Illinois tribute stands 94 ft tall and leans outward 7 ft, 4 inches. You can’t enter this tower, however, as the exterior is just a facade built to disguise what is essentially just a water tower. It does have some pretty fountains around the base, however. 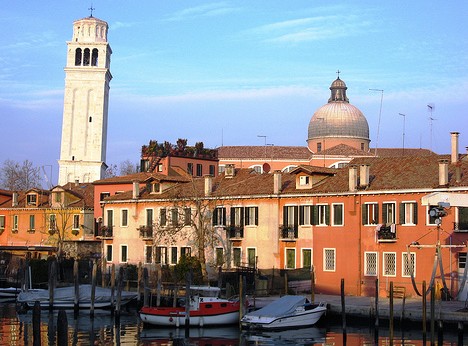 Venice has it’s share of leaning towers, a consequence of great age and waterlogged soil. One of the most outstanding (if not entirely upstanding) is the Leaning Tower of San Pietro di Castello. Clad in bright but heavy Istrian stone, this charming bell tower has complemented San Martino church on the Venetian island of Burano since 1463.

Tower of the Milices, Rome, Italy 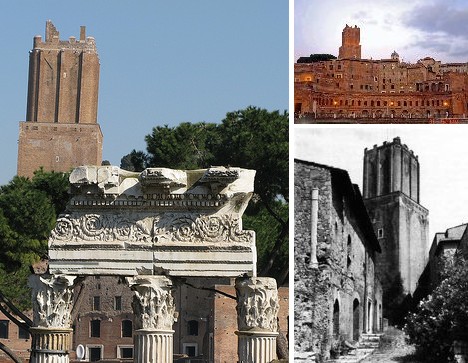 (images via: Virtual Tourist and Filor91)

The Torre delle Milizie was begun in the year 1200 and finished around 1280. Originally having three stories, a great earthquake in 1348 shook the top story to pieces. The main tower, however, has remained firmly standing though it has acquired a pronounced tilt over the past 800 years. Scientists and engineers examining the approximately 150 ft. tall Torre delle Milizie say its current 1.36 degree tilt towards the north-east will increase a further degree over the next 600 years, assuming another great earthquake doesn’t finish the job before then.

The Church of St Mary and All Saints, Chesterfield, UK 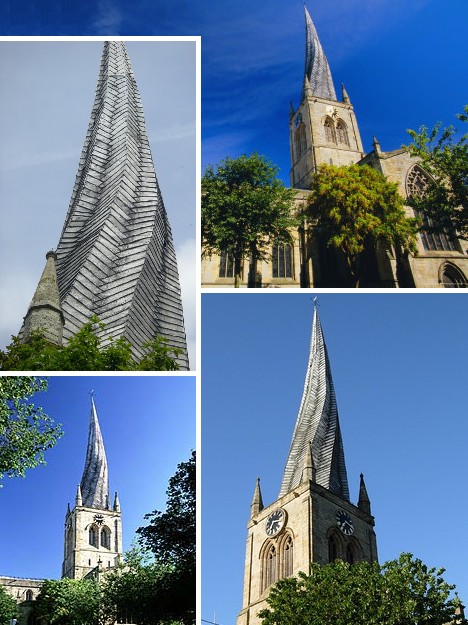 (images via: Pictures Of England, Tywkiwdbi and Allposters)

The Church of St Mary and All Saints in Chesterfield, Derbyshire, has acquired many legends over the centuries to try and explain why its spire is so radically twisted. One of the more amusing purports that the spire was shocked to see a virgin getting married at the church and twisted around to get a better look. A more scientific explanation is that a shortage of skilled workers in the mid-1400s when the church was being built resulted in green, un-cured wood being used to construct the spire. When about 50 tons of lead shingles were attached to the spire, the wood couldn’t take the weight and began a slo-mo buckling from the stress. 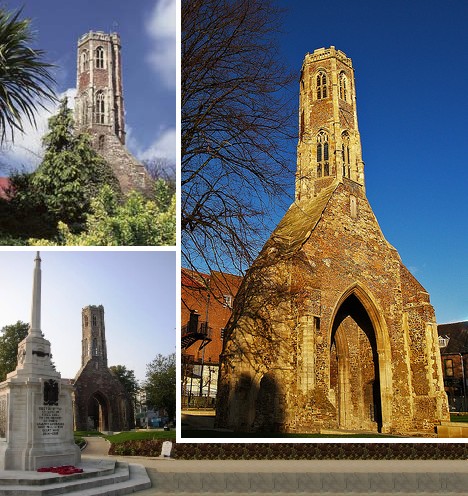 The 92 ft tall Greyfriars Tower is all that’s left of once-mighty Franciscan abbey demolished in 1538 during King Henry VIII’s purge of monasticism and dissolution of the abbeys. The tower was left standing because it was a useful landmark for seafarers – a lightless lighthouse as it were. With a current lean of 27 inches or approximately 1 degree (the Tower of Pisa leans 3.98 degrees), Greyfriars Tower was stabilized by workmen in 2006 after fears were expressed that it could collapse onto the Theatre Royal just adjacent. 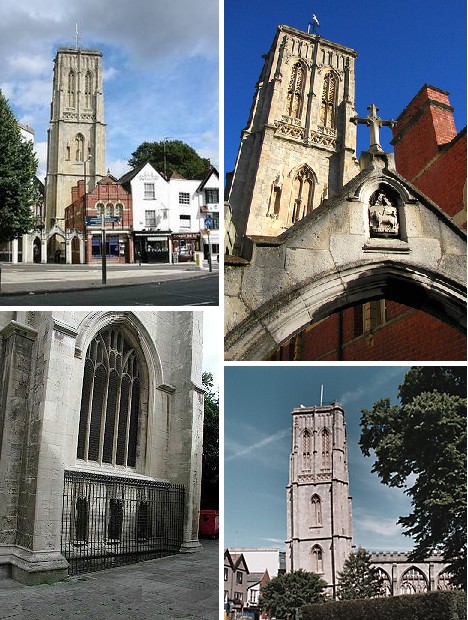 Measured from the top, Bristol’s Temple Church leans out about 5 feet but is in no danger of toppling over. The 114 ft tall church, dating from 1312 and not completed until 1460, was built on the site of a dismantled church belonging to the Knights Templar. German bombing during World War II’s “Bristol Blitz” caused irreparable damage to the church’s interior and in 1958 the building was taken into state care by English Heritage. 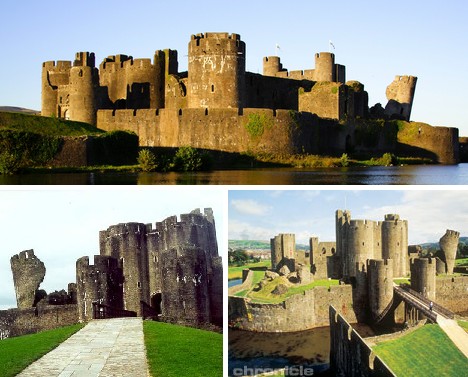 (images via: InfoBritain, Planetware and Chronicle)

One of the medieval age’s largest and most formidable castles, Caerphilly Castle guarded the border between England and Wales while presenting a bulwark against any uprising by the Welsh. Construction on the castle was begun in 1268 by Gilbert de Clare and it was not significantly damaged until the English Civil War of the 1640’s, when one of its towers suffered a very obvious tilt. English Heritage, which now oversees the castle, has finished its restoration but decided to leave the leaning tower as is.

The Round Tower Of The Kilmacduagh Monastery, Ireland 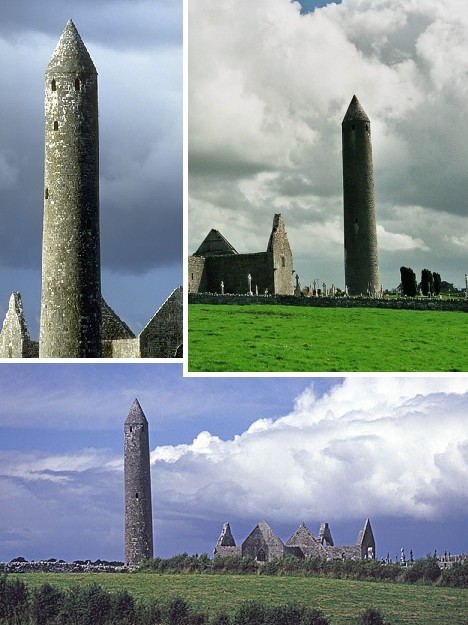 (images via: Sacred Sites and A Student Of History)

At 110 feet, the Round Tower of the Kilmacduagh Monastery is the tallest of its kind in all Ireland. The tower, located near the town of Gort in County Galway, is smoothly finished with its entrance door opening 26 feet off the ground – a very effective refuge for the monks and their treasured religious relics when threatened by marauding Vikings (an all too common event). It’s estimated that the monastery was first established in the 7th century and the tower was built sometime in the 10th century. The tower leans outward some 1.5 feet but is in no danger of falling. 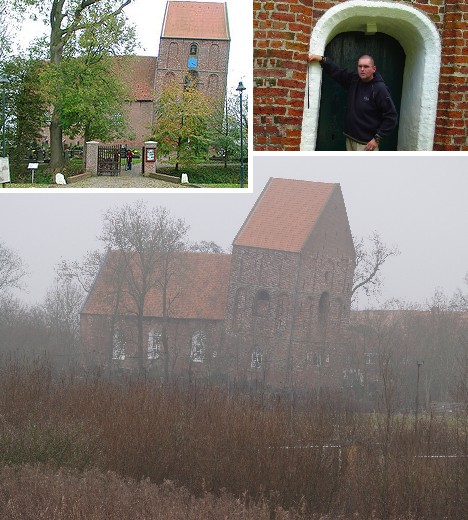 (images via: Wikipedia, Solidaridad and Cafeterra)

Stated by the Guinness World Book of Records to be “the most tilted tower in the world”, the Suurhusen Church‘s highest point leans at an extreme angle of 5.1939 degrees, a startling stat only mitigated by the building’s relatively modest 90 ft height. Though constructed in 1450, the church tower only began to lean in the 19th century when the marshy land it was built upon was drained. The church steeple was closed in 1975 for safety reasons but was reopened a decade later – one must assume it’s now safer than it looks. 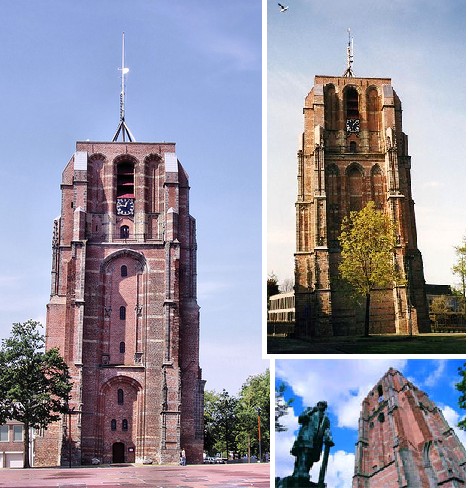 (images via: Holland.com, Hindrik and Dromo)

The Old Tower in Leeuwarden, Fryslan, NL, was supposed to be even taller and grander than the images above show, but after construction began in 1529 and the tower reached a certain height and weight, it began to lean and all work on it was halted in 1533. It’s probably no coincidence that the tower’s main architect, Jacob van Aaken, died 1532 – such things don’t look good on one’s resume. 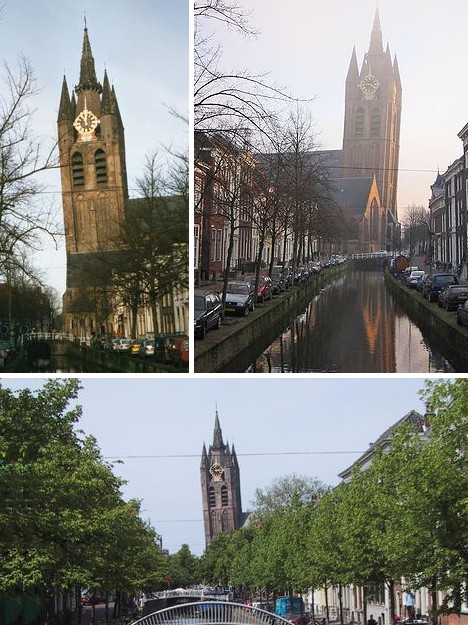 (images via: The Great Mirror, White Valentine and 7is7)

The Oude Kerk (Old Church) in the Dutch city of Delft stands just over 245 feet high and leans about 6.5 feet away from vertical, quite noticable to somebody standing off to the side. Construction first began on the church in 1246 and the tower was built between 1325 and 1350. Inside the tower resides a massive bell weighing nearly 9 tons. The bell, cast in the year 1570, is only rung occasionally due to the fear of damaging vibrations but between you and I, who’d want a 9-ton bell swinging away at the top of a 245ft tall leaning tower? 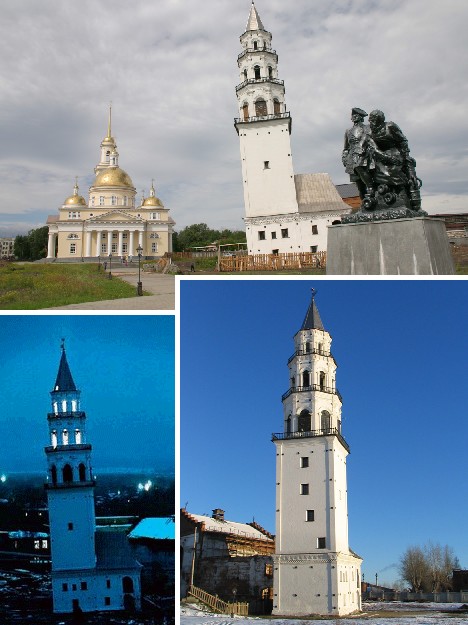 Nevyanskaya Tower leans into the chill wind coming off Russia’s Ural Mountains in the city of Sverdlovsk. Built in the first part of the 18th century, the 189 ft tall tower leans just over 7 ft out from the vertical. he tower was built by Akinfiy Demidov, an associate of Czar Peter the Great and a rumored counterfeiter – traces of gold and silver have been found in the tower’s main chimney. 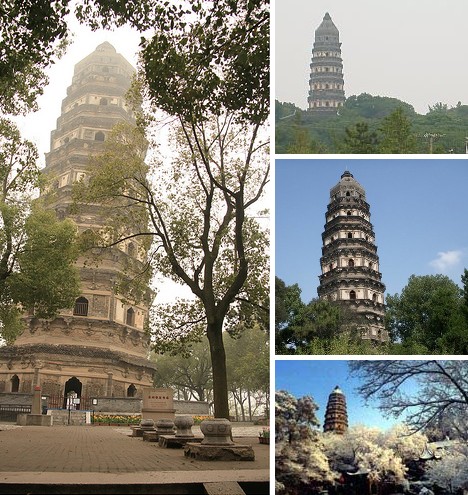 The seven-story, 157 ft high, 8-sided Huqiu Tower was built between 959-961 on the city of Suzhou’s Tiger Hill. It didn’t start leaning until the 17th century. A curious feature of this tower is that it has no internal staircases – anyone wanting to visit the upper floors did so via the use of movable ladders. The top of the tower leans out by just over 7.5 feet, a consequence of the 7,000 ton tower being built partly on rock and partly on soil, causing 2 of the supporting columns to crack.

A new slant on architecture or a tower infernal? Beauty, even if flawed, remains in the eye of the beholder and symmetry is just one of many characteristics a noteworthy building can display.