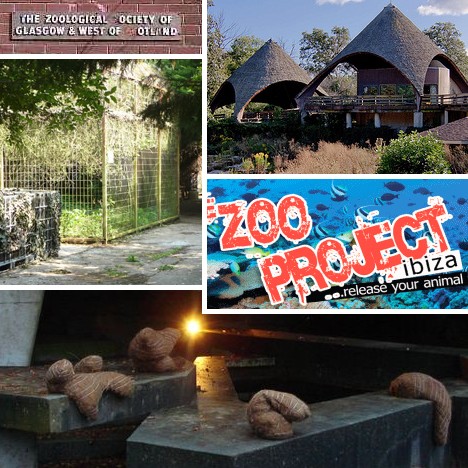 Zoos are more than just living museums of exotic animals, they’re places bursting with life, laughter and wonder – that is, until the cages are emptied and wildlife is gone. These 10 abandoned zoos and wildlife parks are all that remains after those familiar sights & sounds fade into the roaring silence. 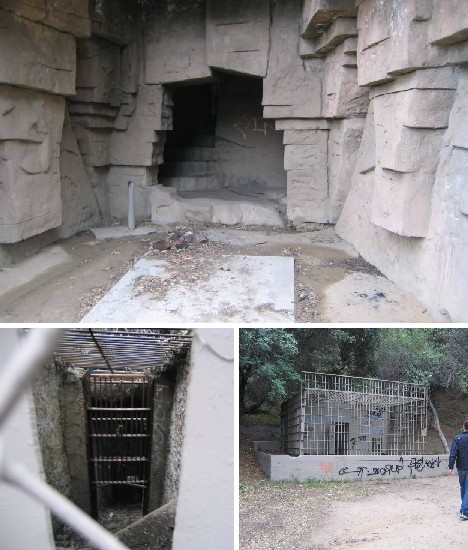 The Los Angeles Zoo opened in 1966 after being relocated about two miles (3 km) south of its original site, where it was first established in 1912. Most of the remaining structures, including cages, concrete enclosures and passageways used by zookeepers date from the 1930s. 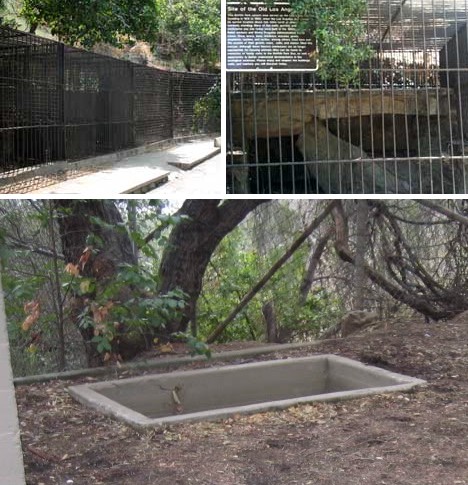 (images via: Roadside America and Plasmaplasm)

The City of Los Angeles has adapted some of the old zoo infrastructure to modern uses: one example being the monkey habitat that is now a picnic area complete with barbecues and benches. Most of the rest is overgrown by vegetation and defaced with graffiti.

Here’s a short video of the old Griffith Park Zoo, looking as creepy as one might imagine: 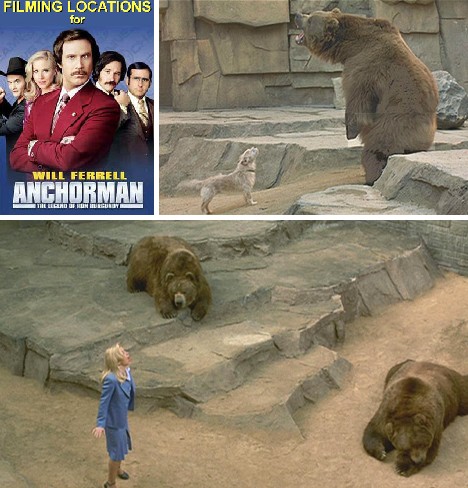 You may have seen parts of the old Griffith Park Zoo regardless if you’ve ever been to Los Angeles. Some locations used in the feature film “Anchorman: The Legend of Ron Burgundy” were shot amidst the remnants of the old zoo. 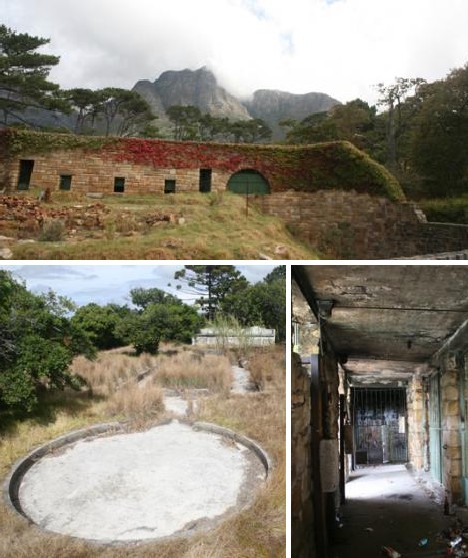 The Rhodes Zoo, located in Cape Town, South Africa, was designed by and named for 19th century British colonialist and founder of the De Beers diamond company Cecil Rhodes (1853-1902). The zoo was built in the 1890s and the last sections were closed in the 1970s. The masonry structure at above top is the lion’s enclosure while the circular structure is what remains of the crocodile pond. 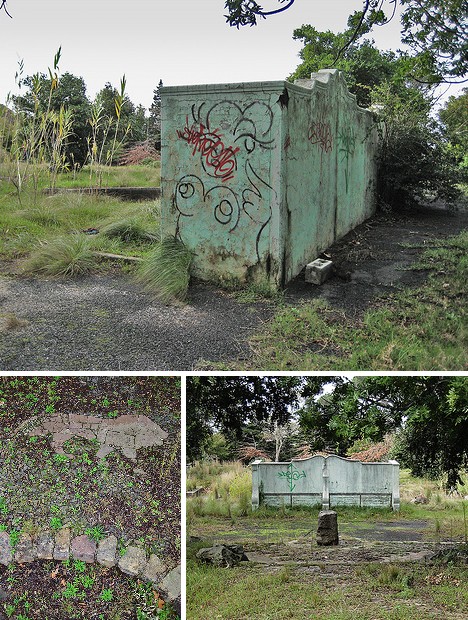 Many of the existing structures display an eerie Victorian sensibility that was intended to suit zoo visitors; the dark, cramped cages and enclosures acted as little more than prisons for the animals. 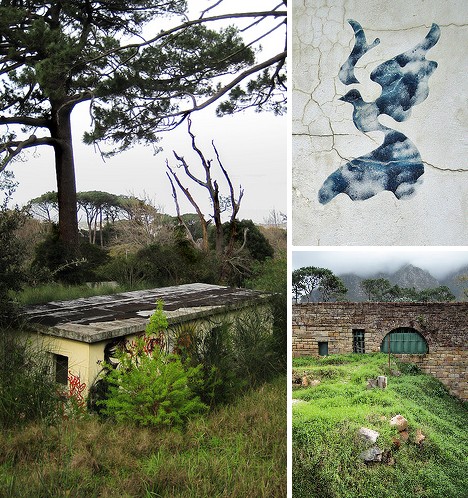 At present the site of the Rhodes Zoo is slowly being reclaimed by nature, offering photographers a unique setting of almost post-apocalyptic ruin partially subsumed by vivid green underbrush. The location of the former zoo also makes for exquisite scenes backdropped by steep rocky mountain peaks and ethereal low-lying fog banks. 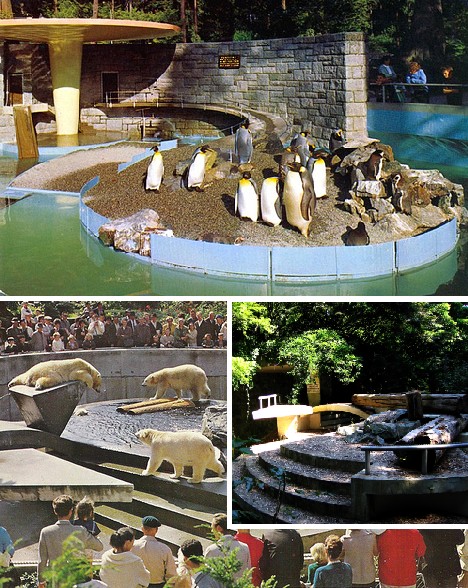 (images via: Vancouver Is Awesome and TBray)

The Stanley Park Zoo in Vancouver, Canada had humble beginnings: the first exhibit was a black bear chained to a tree stump by Henry Avison, the park’s first superintendent and zookeeper. Over the years Avison gradually expanded to the zoo and at its peak it hosted 50 or so different animals including buffalo, penguins, wolves and kangaroos. 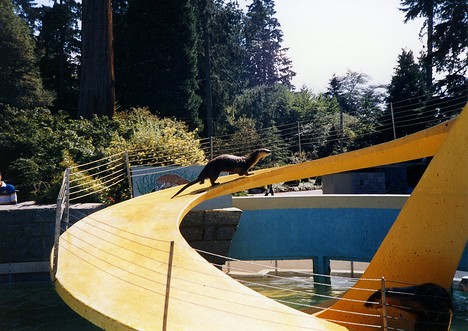 The old Stanley Park Zoo was definitely a product of its times, boasting stereotypical Space Age architecture. By the early 1990s the zoo was badly in need of modernization but a public referendum on the subject instead indicated Vancouverites preferred to close the zoo completely. The last remaining animal at the Stanley Park Zoo was a polar bear named Tuk, who died in late 1997 at the age of 36. By December the zoo was closed and the oft-criticized polar bear pit was converted into a demonstration salmon spawning hatchery. 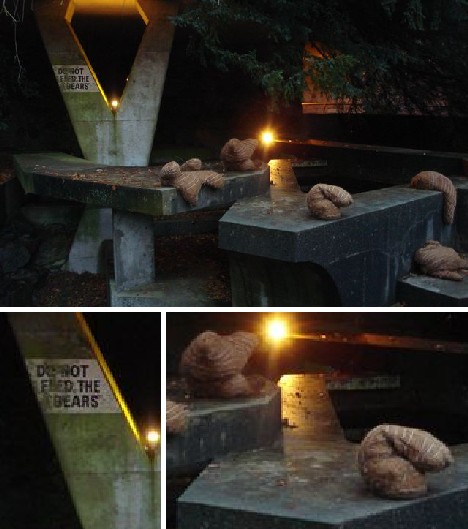 Artists occasionally use the remnants of the old Stanley Park Zoo for their own purposes. One such example, seen above, employed stuffed burlap sacks positioned within the old bear enclosure and posed to look like bears and bear cubs. 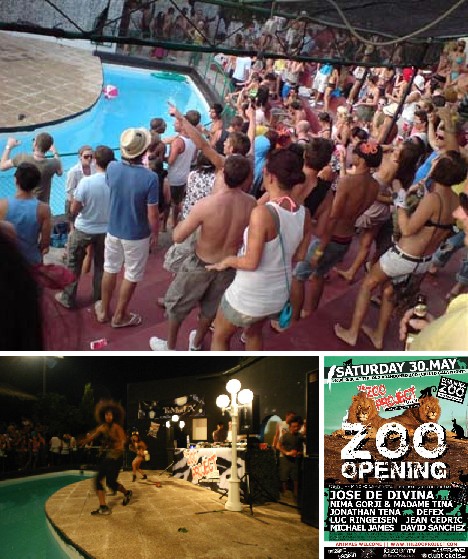 (images via: Ibiza Spotlight, Ibiza Unlike and HousePlanet.DJ)

A small abandoned zoo on the Spanish island of Ibiza has taken on new life as the venue for the resort island’s largest daytime outdoor rave events. The heart of these events is at the former Seal Pit where the moat that once kept the seals in now keeps the ravers separated from the DJs and bands that energize and entertain the mostly British crowds.

Here are a few ravers releasing their inner animals at The Abandoned Zoo: 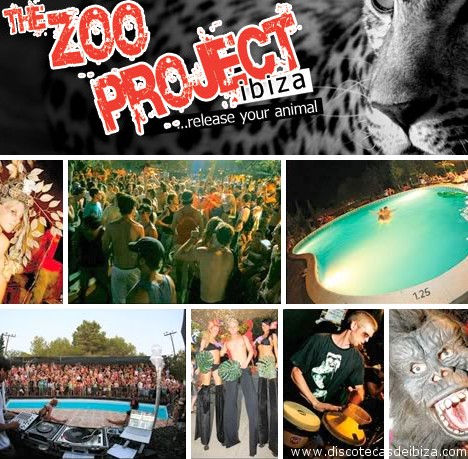 (images via: The Zoo Project and Discotecas de Ibiza)

The Zoo Project started out as a recurring series of free dance parties held at an old abandoned zoo in the hills of Ibiza, just outside San An. After several years of increasing popularity, the rave events were officially sanctioned as The Zoo Project with the first series of advertised raves taking place in 2007. 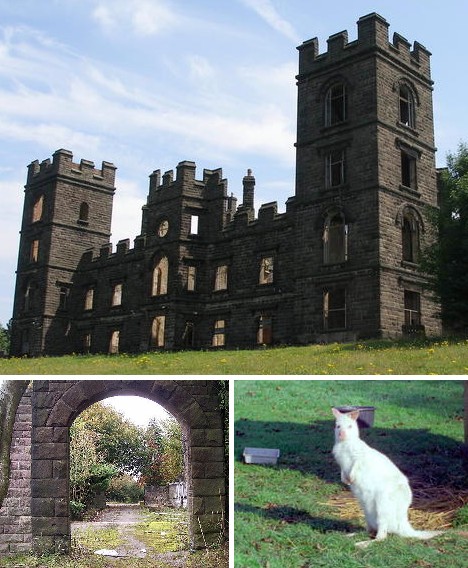 Built in 1862, Riber Castle was originally a private home in the tradition of medieval England’s great gothic country houses. In the early years of the 20th century the estate was used as a private boys school – sort of an anti-Hogwarts – but the advent of the Great Depression saw the school close. After being used as a storage depot during World War II, Riber Castle fell into disuse and decay for 20-odd years until it reopened again in 1963 as the Riber Castle Wildlife Park, or Riber Zoo. Rumors of animal cruelty and maltreatment sparked the fury of Great Britain’s radical animal activists, who famously released several lynx (bobcats) from their cages into the surrounding area. Sightings of the so-called “”Beast of Lumsdale” persisted for years.

Take a short tour around the decrepit remains of the Riber Castle Wildlife Park via this video: 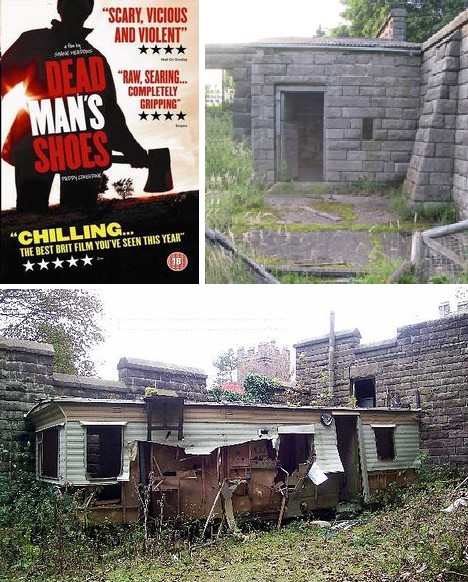 Riber Castle Wildlife Park was closed in October of 2000. The estate’s main buildings currently have neither floors nor roofs though the outer walls are structurally sound. The status of the estate has led local councilors to consider re-developing the estate as an apartment building. Film buffs may recognize Riber Castle and the nearby town of Matlock from the Shane Meadows film “Dead Man’s Shoes” which was shot on location. Click here to see some incredible panoramic views of Riber Castle and its eerie environs. 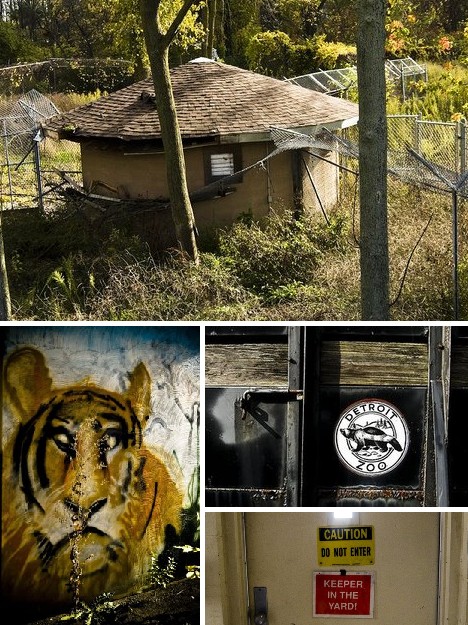 The Belle Isle Zoo opened in 1895 on Belle Isle, a 982 acre (1.53 sq mi) island in the Detroit River. The zoo evolved over the years, becoming the Belle Isle Children’s Zoo in 1947 and undergoing an expensive modernization in 1980. 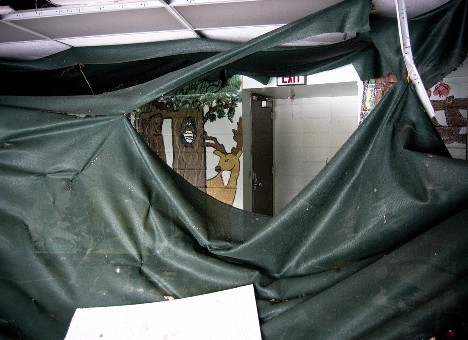 Disgraced Detroit mayor Kwame Kilpatrick ordered the Belle Isle Zoo closed in 2002 against the wishes of city council, though the Belle Isle Nature Zoo in an isolated corner of the former zoo was funded and continues to operate. 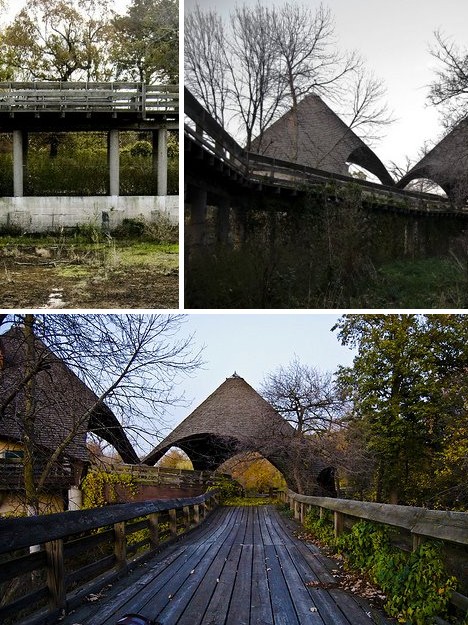 The Belle Isle Nature Zoo Nature Zoo is a one-acre enclosure that is home to about 25 deer which, until 2004, used to run free on Belle Isle. The Nature Zoo is operated and funded by a non-profit organization that is not dependent upon the changing tides of political fortune for its funding. A pity the former Belle Isle Zoo was not maintained on that basis… instead, it continues to decay year after year as rumors regarding its revival fade in sync. 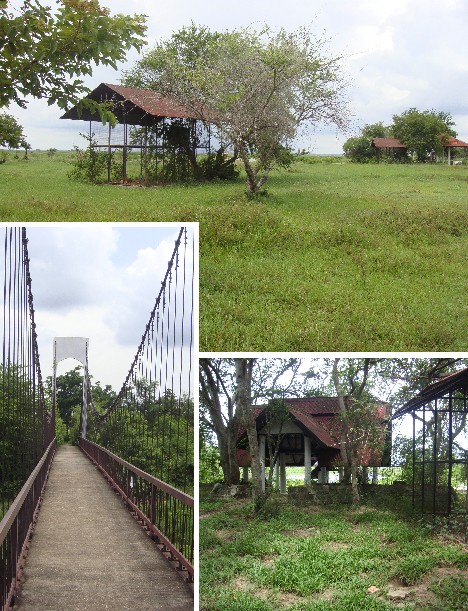 A rare and unusual discovery is the un-named abandoned zoo on the shore of Nong Han Lake in Sakon Nakhon, northeastern Thailand. While the park is a popular recreation area for residents of and visitors to Sakon Nakhon (population 76,000), that can’t be said for the remnants of the former zoo. 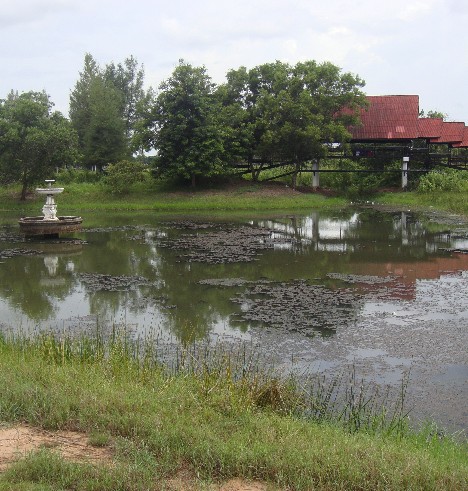 Consisting of isolated pavilions scattered across raised portions of the swampy wetland, the abandoned zoo is rapidly being reclaimed by the fast-growing tropical vegetation native to this fertile part of northeast Thailand. 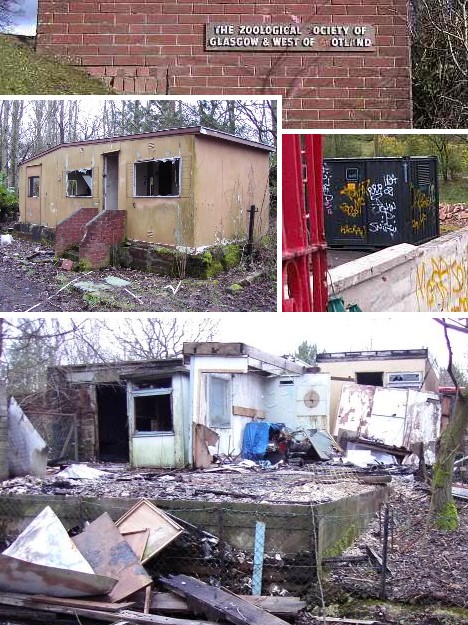 Glasgow Zoo Park in Glasgow, Scotland, was closed in 2003 for financial reasons and the facilities have deteriorated alarmingly fast since that time. Rust, weathering, vandalism and graffiti have combined to create a grim landscape only the central characters of the film Trainspotting could fully appreciate. 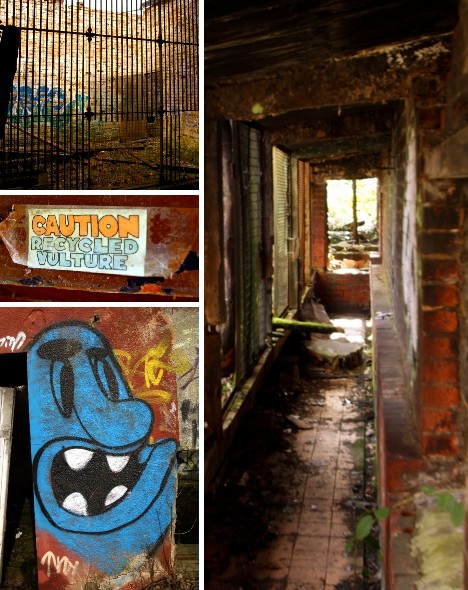 What is it about abandoned zoos that attract those eager to assist in their decay? Is it the post-apocalyptic setting formed of poured concrete, chain link fencing and rusted iron bars? Do the dregs of society feel some strange bond of cross-species alienation with the formerly free creatures who once paced the cold floors of these cages and enclosures? Unlike the animals who once populated the Glasgow Zoo, human visitors – then and now – at least have a choice. Choose life? 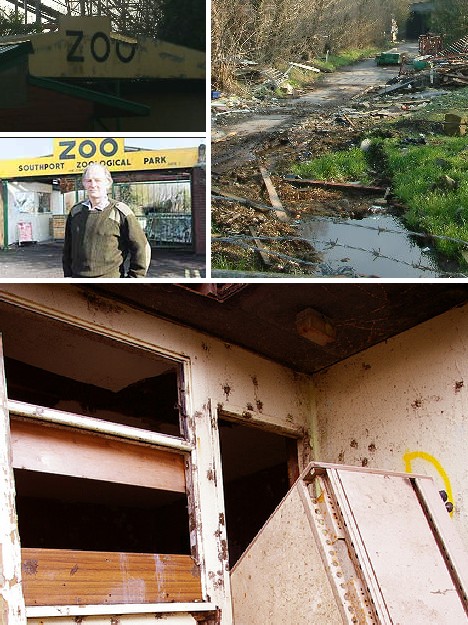 The Southport Zoo, located near Liverpool, was a private venture run by the husband and wife team of Douglas and Carol Petrie. Opened in 1968, the Southport Zoo was no small undertaking: at its height, the zoo sprawled over 6 acres and housed 1,272 animals from 154 different species. Following a judgment against the owners of the Southport Zoo for failing to register a number of endangered animals in late 2001, the local city council decided against renewing the Petrie’s license to operate and the zoo was forced to close in October of 2004. 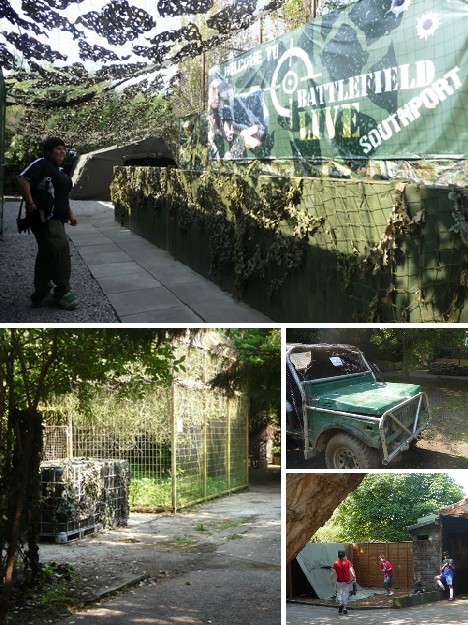 The Southport Zoo’s land and facilities were sold to the adjacent Pleasureland amusement park, who allowed the abandoned zoo site to drift into neglect for several years. Finally, in August of 2010, a laser-tag style virtual combat game called Battlefield Live Southport opened on the grounds of the old zoo. Players engage in virtual combat in the Battlefield Arena, which uses many of the original buildings and cages once used by the former Southport Zoo. 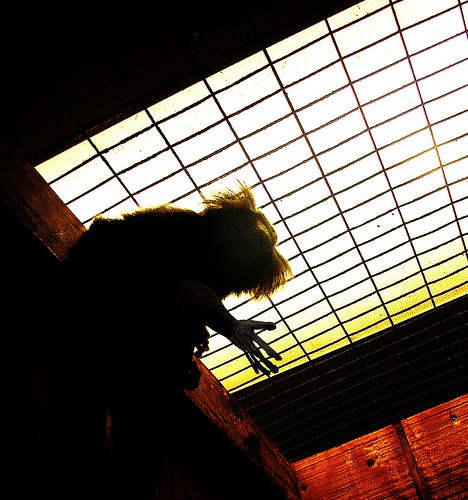 Our final entry – and not coincidentally, the most recent zoo to close – is the Plumpton Park Zoo in Rising Sun, Maryland. The 110-acre zoo was founded in 1986 by Ed Plumstead, now 82. Inspectors from the U.S. Department of Agriculture who filed a damaging report on the zoo at the end of June, 2010, made mention of 21 violations of federal regulations governing animal health and safety. Update 6/2012: It turns out this story has a happy ending after all – the zoo has been reopened under new ownership and is thriving, according to an email received from their new management! 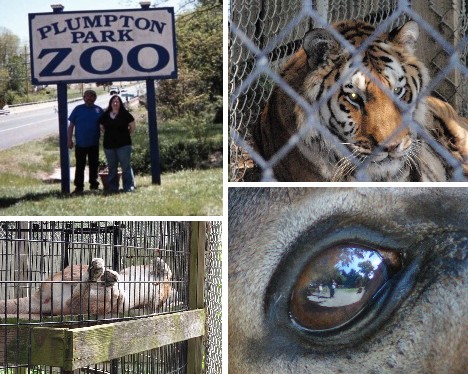 (images via: Cecil Observer, Negotiation Is Over, Eric E Haas and Cecil County)

Due to Ed Plumstead’s advanced age it seems unlikely he will be able to perform the many needed repairs and upgrades required to satisfy the USDA. What will become of the Plumpton Zoo’s facilities, let alone its many animals? 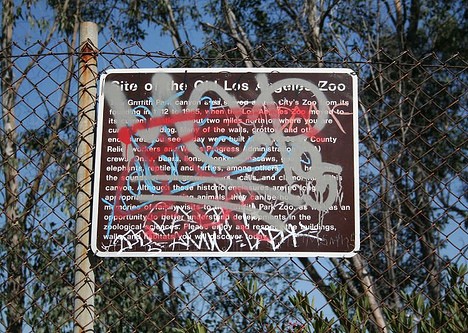