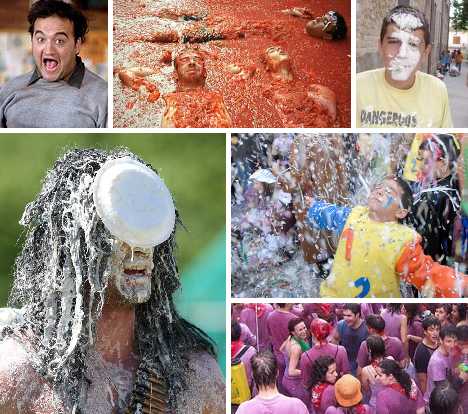 Sometimes it seems like the world’s one big Animal House, with tens of thousands of Bluto’s just itching to pop. Wasteful? Possibly. Mean-spirited? Not in the least! These 10 famous festival food fights are all about respecting tradition and blowing off steam… so let he who is without stain throw the first rotten tomato!

The Battle of the Oranges, Ivrea, Italy 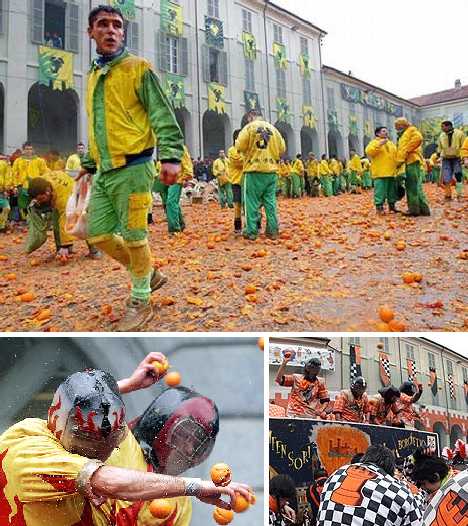 The Battle of the Oranges (Battaglia delle Arance), which takes place annually in the Italian city of Ivrea, is certainly the largest and quite possibly the oldest organized food fight in Italy. The event’s origins go back to the 12th century and commemorate the victory of Ivrea’s townspeople over an oppressive tyrant. Here’s a video showing scenes of the battle in all its juicy glory: 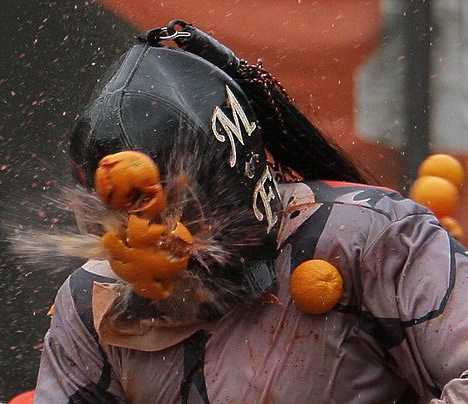 (image via: The Ugly Truth)

Oranges haven’t always been the weapon of choice in the annual battle – at first beans were thrown, then apples. By the 19th century oranges took over as the preferred missiles and by 1994 an estimated 580,000 lbs (265,000 kilograms) of oranges – mainly unmarketable leftovers from southern Italy’s winter crop – were being imported into town for the start of the Carnevale d’Ivrea in February. On an explanatory note, Italy is a member of the EEC (the European Economic Community) and typically exceeds its agreed production quota of oranges. In a classic twist of Euro-logic, the excess must be destroyed in order to maintain the retail price. 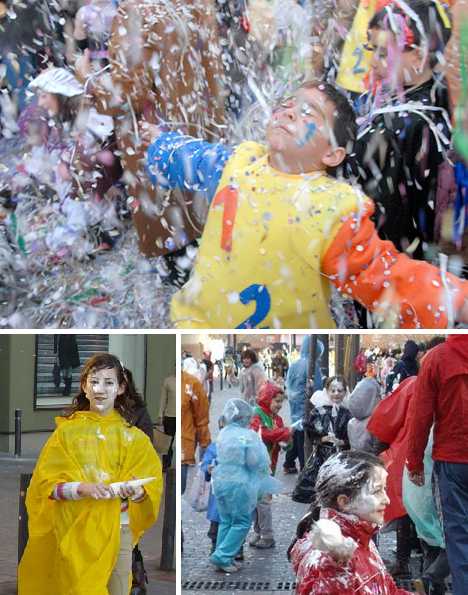 (images via: Frommers, Vilanova Digital and Wirdheim In Vilanova)

Also known as the Batalla de Caramelos (Candy Fight), this sweet celebration begins each year on Fat Thursday… of course. Residents and guests in this small Catalonian town first enjoy a traditional Lenten meal of cod fish with red pepper sauce and salad; then work off the calories by going outside and throwing their meringue dessert at anything that moves. Once they run out of meringue, out comes the candy, which (if you’re under 12) is just dandy. Hey, that’s one VERY happy kid there! 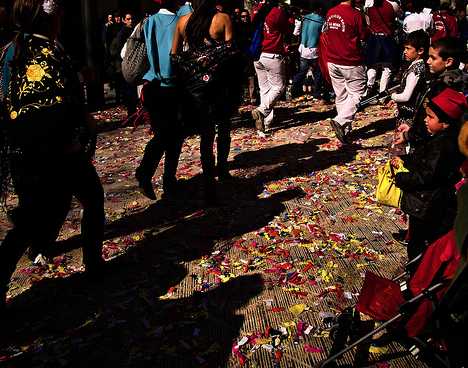 The Meringue War is just one part of the Carnival at Vilanova i La Geltrú, as on the Saturday before Shrove Tuesday, revelers of all ages endeavor to catch tons of sweets and candies which are launched into the crowd. Needless to say, the ground underfoot is quickly coated with a sticky, sugary topping thick enough to give every scavenging squirrel in the county a serious case of diabetes. 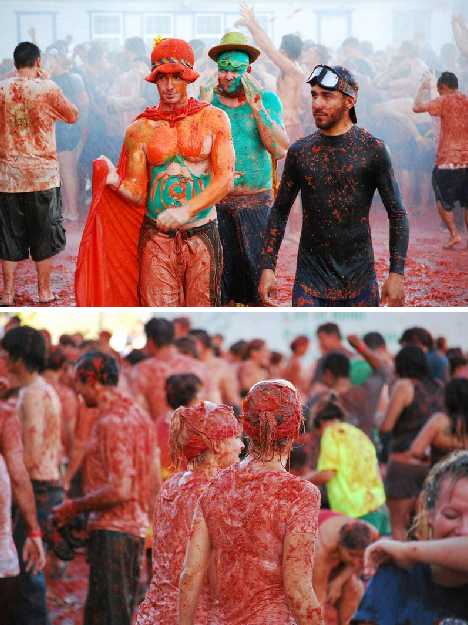 Who loves a tomato fight? Everyone loves a tomato fight! They must – or else we wouldn’t have not one, not two, but THREE massive ‘mato massacres making our Top 10 Food Fights list. We’ll lead off with La Tomatina en Reno, by far the sloppiest event in the “Biggest Little City in the World”. Inspired by the original Tomatina food fight in Buñol, Spain, Reno’s version matches 5,000 participants with 100,000 pounds of tomatoes – and everyone’s a winner! 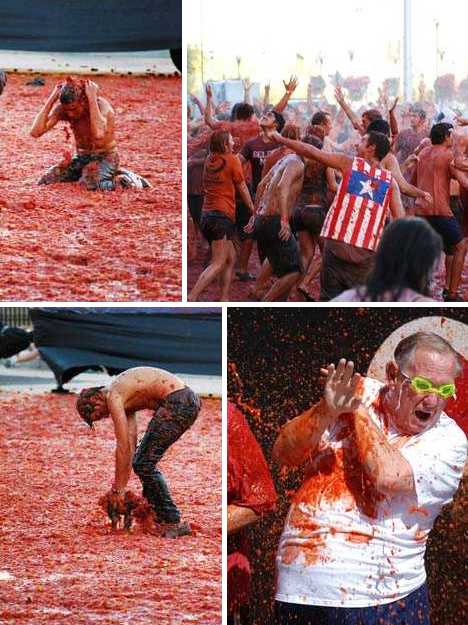 The event takes place the last weekend of August and only overripe, inedible Roma tomatoes are tossed… which is better than simply tossing them in the trash. La Tomatina organizer Club Cal Neva charges a $10 per participant fee and if you’d like to chuck produce at the Mayors of Reno and/or nearby Sparks (and really, who wouldn’t?), you’ll have to “fork” over $50. All profits from the event go to a good cause: the American Cancer Society. 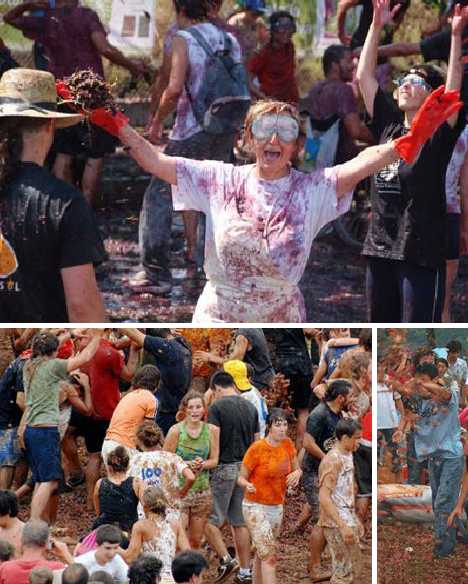 (images via: MSN Travel and FestivalPig)

Welcome to Spain, we hope you’ve brought a change of clothing! This advisory is especially important if you’re considering a visit to the town of Pobla del Duc, less then an hour from Valencia, around the last Friday in August. Should you find yourself there, note the steady procession of trucks loaded with grapes – they’re not bound for any warehouse or processing plant. Between 40 and 90 tons of locally grown Garnacha Tintorera grapes are off-loaded in the town square and as for what happens next… remember the classic grape-throwing scene from I Love Lucy? Multiply it by about a thousand. 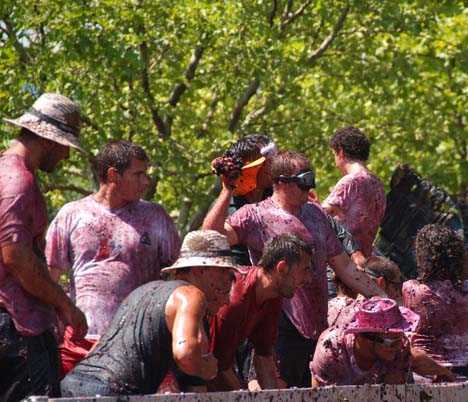 (image via: Somewhere In The World Today)

The La Raima Grape Throwing Festival is an yearly ritual dating back to the 1930s that signals the end of the annual grape harvest. The food fight originated when grape farmers blew off steam at the end of the grape harvest by flinging surplus grapes at each other. Sweet! 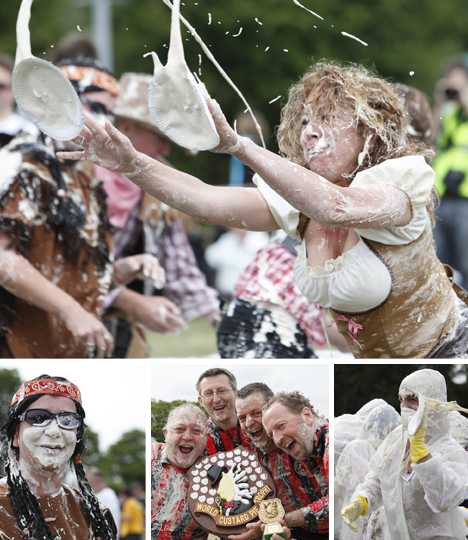 Fans of the Marx Brothers and Blazing Saddles can live out their pie in the sky fantasies by attending the World Custard Pie Championship in Coxheath, UK. No, this is not a bake-off, nor is it an athletic competition judged by distance and accuracy. Imagine a huge, open-air paintball game using giant, edible paintballs… and to those who object, say let ’em eat cake! 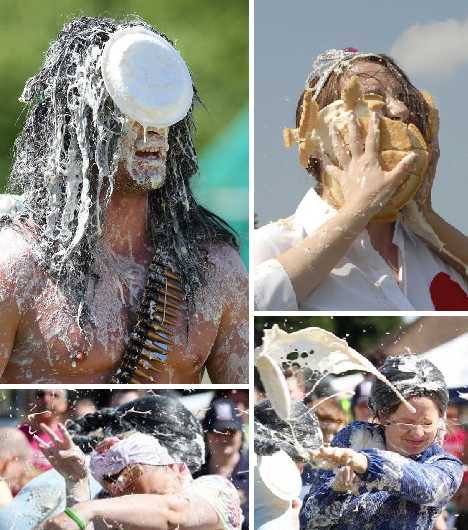 The World Custard Pie Championship got its start in 1967 by Mike Fitzgerald, a city councillor from Coxheath, envisioned a festive event inspired by his favorite Charlie Chaplin films. It’s said that the custard that goes into the pies (and onto the pie-tossers) employs a secret recipe designed to hold together through flinging, hurling, and of course – landing. Fair-goers are advised that they enter the area at their own risk, and those who disregard the warning end up getting their just desserts. 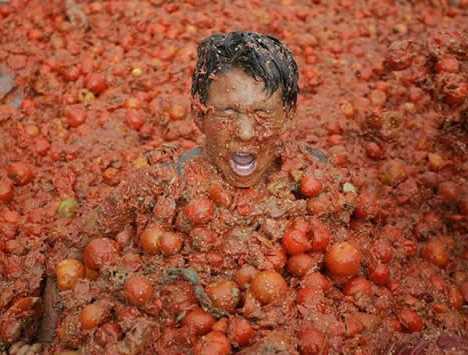 When in Sutamarchan, do as the Sutamarchanians do… and that’s put on Colombia’s biggest, messiest and tomatoiest food fight EVAR. The event, held on June 14 this year, featured hundreds of locals and tourists who gathered on an old football (soccer) field and proceeded to launch 15 tons of tomatoes into the sky. Of course, what goes up must come down. Like La Tomatina en Reno, La Tomatina in Sutamarchan was inspired by the famous Tomatina of Buñol, Spain. The Colombian version adds a few variations, however, such as adding a tomato-eating contest and a competition for the largest tomato – one assumes the former follows the latter. 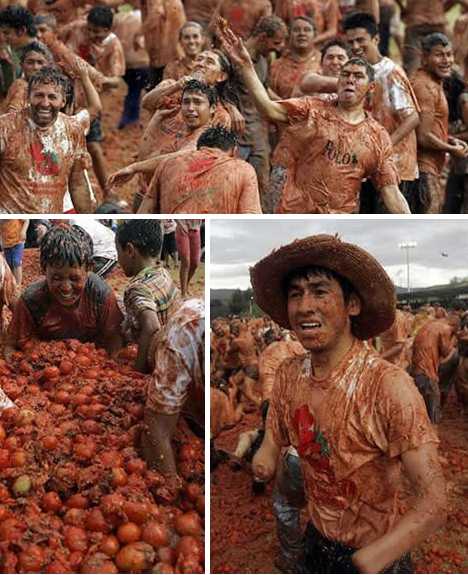 While it may be significantly smaller, the Colombian version of La Tomatina is no less messy. It’s also more family-friendly with children doing cannonballs into pools of tomatoes – yeah, Mom’s gonna love that. Only rejected or otherwise inedible tomatoes are used in the food fight, which comes at the climax of a three-day Tomato Festival celebrating the importance of the region’s tomato crop. 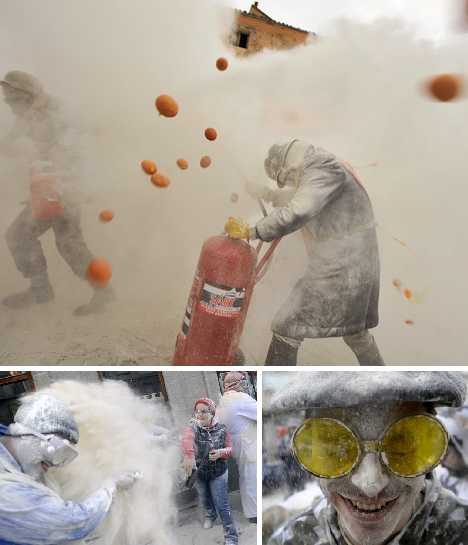 (images via: Ipernity and Before It’s News)

Food fight aficionados should be sure not to miss the annual Els Enfarinats festival in Ibi, Alicante, Spain, and they should be especially sure to arrive BEFORE the main event and not after… if you thought rotten tomatoes smelled bad, just imagine the aftermath of a huge flour & egg battle. The place must reek for weeks, and that’s no yolk. 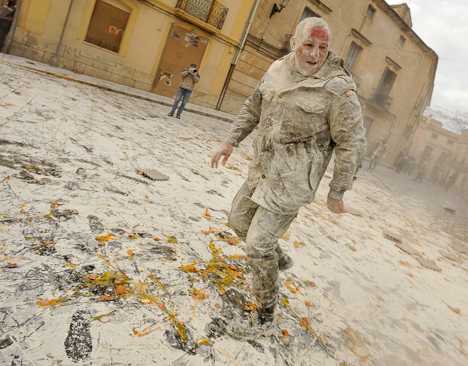 The egg-citing main event has been staged for nearly two centuries and takes the form of a mock coup d’etat. A top-hatted, rebel army known as “Els Enfarinats” invades the town of Ibi every December 28th, collecting taxes and “shelling” flour and eggs onto the residents who naturally respond in kind – one bitter batter battle, to be sure! After the dust settles, all taxes collected are donated to a designated charity. In 2010, San Joaquin’s retirement home in Ibi was the beneficiary. Maybe they would’ve just preferred omelets. 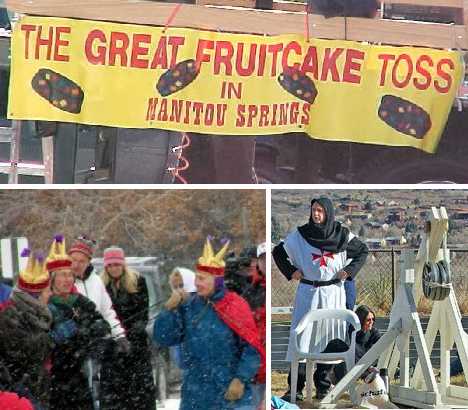 “At last, the answer to that age-old question: How do I get rid of this *$&*@#! fruitcake?” While re-gifting fruitcake is an age-old tradition, sooner or later you’re gonna get that petrified pastry back. At that point, there’s nothing left to do but dump it in the trunk and head on out to Manitou Springs. Once there, fruitcake flingers can opt for disposal via catapult, giant slingshot, or spud gun. Hiking in the area is not recommended – between the flying fruitcakes and some seriously annoyed bears, taking a trek through the woods would be nuttier than a… you know. 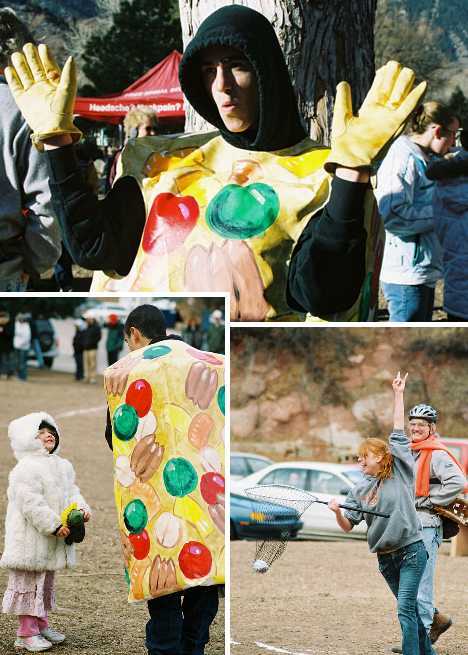 While not a food fight per se, the Great Fruitcake Toss embodies some elements common to more traditional comestible wars. For instance, the tossed food is generally regarded as being inedible, participants wear funny hats, and a local charity receives donations of cash and food – anything but fruitcake! The 16th Annual Great Fruitcake Toss takes place on January 8th, 2011 beginning with a with a 15 gun salute. Hopefully the fruitcake will be blindfolded beforehand. 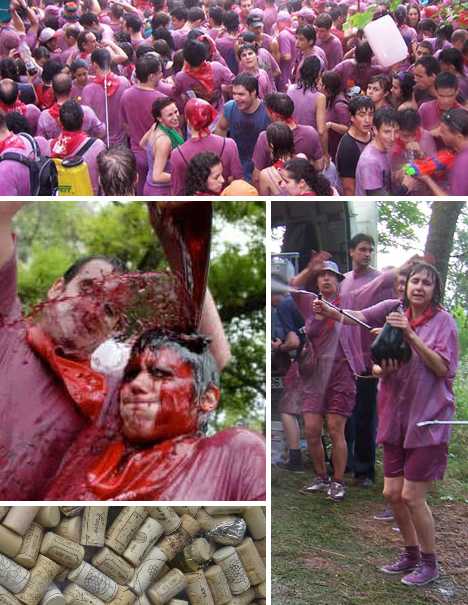 (images via: Most Interesting Destinations)

What began as a 13th century land dispute has evolved into the annual Batalla del Vino (Wine Throwing Fight), because who in their right mind would dispute some land for 700-odd years unless they were properly plastered on the local plonk? Leave it the fun-loving residents of Haro in La Rioja, Spain, to come up with this “full-bodied” festival that, by its end, sees everyone involved being involuntarily inducted into the Purple Gang.

Here’s a video that shows the burgundy bacchanalia in full swig, er, swing: 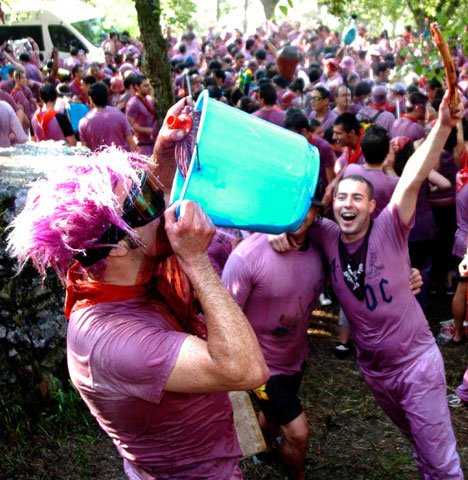 Thousands of participants descend on Haro each year, armed with wine-filled wineskins, water pistols, crop sprayers and – if all else fails – plain old buckets. Prospective wine-battlers are given but a single directive: wear white. By the end of the violence, all will be violet. 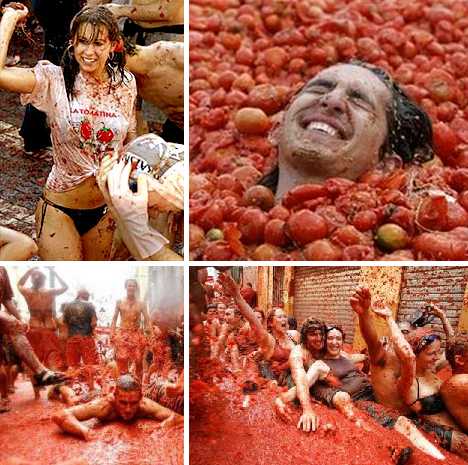 When it comes to food fights, all must bow down to the grand-daddy of them all, La Tomatina in Buñol, Spain. Each year on xx, the town is swamped with a tsunami of tomatoes as the air rapidly turns rosy red in hue and redolent with the heady scent of sauce. As the poster child for massive outdoor food fights, La Tomatina is widely reported on by world media and has become as well-known as the Running Of The Bulls in Pamplona – also Spanish, but much less tasty. 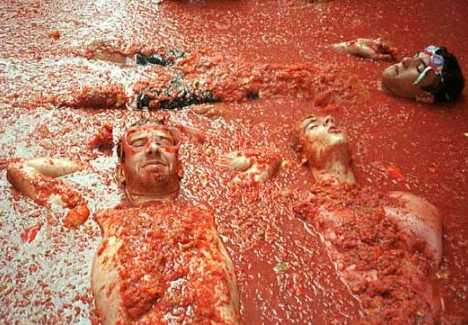 La Tomatina may be huge in scale but it has a surprisingly short history that can be traced back to the mid-1940s. As it is not a religious festival, La Tomatina was banned during the Spanish State era of the Franco dictatorship but was revived upon the dictator’s death in 1975. Over the past 35 years La Tomatina has grown to be a week-long festival ending with the tomato fight on the last Wednesday of every August. 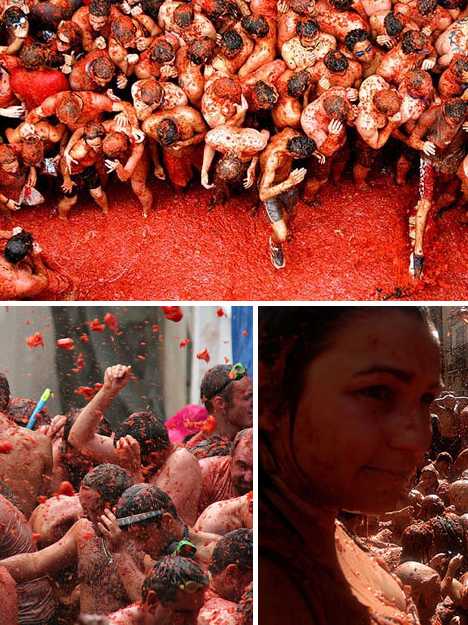 By the start of the fight, the number of participants in attendance reaches around 20,000 – matching the population of Buñol in other, non-tomato-y months. Approximately 150,000 tomatoes (over 90,000 pounds!) sourced from the four corners of the country are then “released” from a fleet of trucks by official instigators and the battle is on! Surprisingly, considering the big buildup, the actual battle only lasts about a half hour but the visual carnage is exceptional. Overly marinated tomato tossers repair to the riverside afterward where a row of portable public showers await. 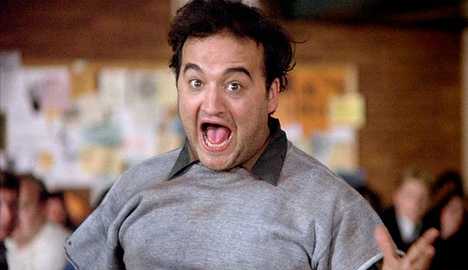 The mere concept of mass food fights strikes many as deplorably wasteful, a shameful indulgence that mocks millions of the world’s poorest and hungriest people. Lighten up, Francis! The towns and regions that hold food fighting festivals have, in many cases, done so for centuries and their agricultural infrastructure is geared to provide revelers with all the organic ammunition they need. Besides, can you imagine what 30 truckloads of tomatoes will look like after sitting on store shelves in a small Spanish town for 30 days, or after a week-long voyage to a sweltering African port? Exactly… and so, with that said, there’s only one thing left to do: Food Fight!!