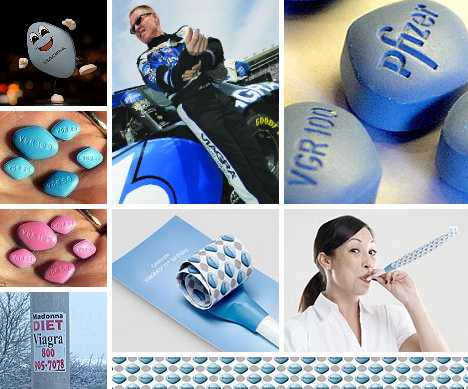 Viagra was approved by the U.S. Food and Drug Administration as a treatment for ED (erectile dysfunction) on this date in 1998, and the world of interpersonal relationships would never be the same again. To celebrate Pfizer’s wunderkind officially entering its teenage years, let’s review in words and pictures the titillating tale of the “Little Blue Pill”. 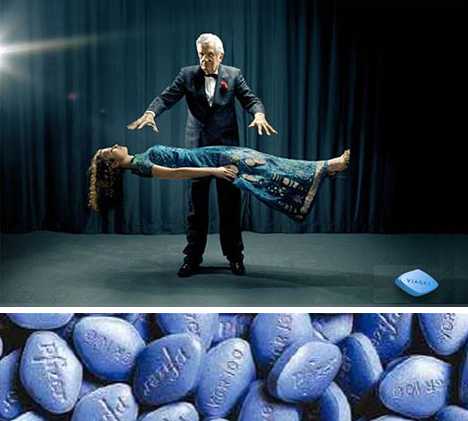 (images via: Covertress and Jack’s Blog)

You won’t ever hear the tag line “I was a teenaged treatment for impotence,” but on March 27, 2011, that’s exactly what Viagra became. That Pfizer’s massively successful male libido (among other things) booster is now officially an all-sexed-up-and-no-place-to-go adolescent is mildly amusing at best, somewhat ironic to say the least. Has it really been 13 whole years since the FDA officially gave new hope to ED sufferers who’ve tried everything from eye of newt to penile implants in a never-ending effort to make a stand? 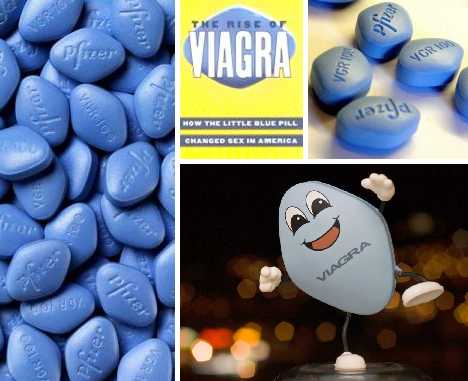 Viagra, or Sildenafil Citrate if we use the chemical name for the compound, was first synthesized in the early 1990s by a team of pharmaceutical chemists working for Pfizer Incorporated at a facility in Sandwich, Kent, UK. Though the team was testing a variety of different formulations intended to relieve Hypertension and ease symptoms of Angina Pectoris, early clinical trials soon revealed an unintended side effect: male participants were subject to pronounced, long-lasting erections. 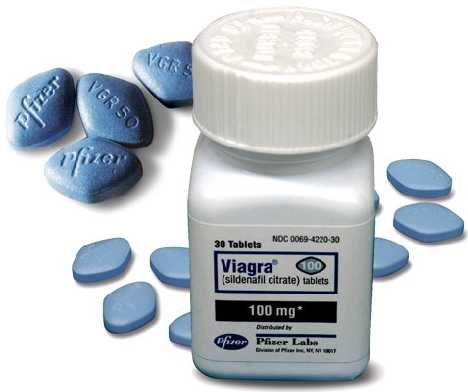 Pfizer immediately grasped the possibilities Sildenafil offered and switched the focus of the compound from high blood pressure to the relief of ED (erectile dysfunction). Subsequent events proceeded with great speed: a patent was granted in 1996 and the FDA approved Viagra’s use in the treatment of ED on March 27 of 1998. 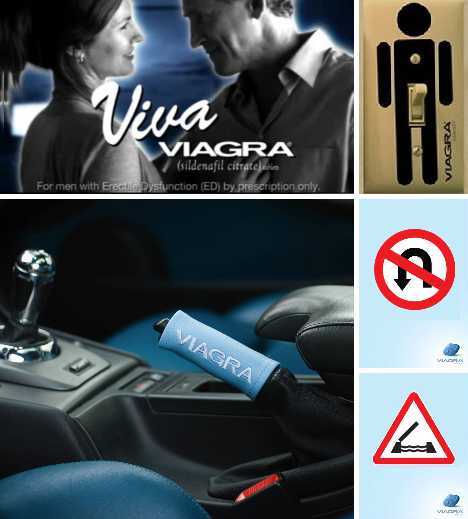 Within months, Viagra became available in the United States. Marketing of the so-called “miracle drug” was both novel and unusual: Viagra was (and still is) only available via a doctor’s prescription but Pfizer publicized it through a memorable TV ad campaign featuring notable celebrities such as Brazilian soccer legend Pele and former U.S. Senator Bob Dole. Doctors were writing prescriptions seemingly by request; it was even possible to order the drug over the internet simply by filling out a short online consultation. 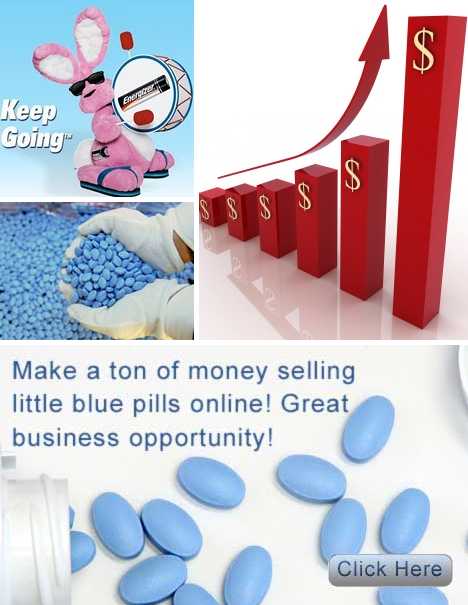 Between Pfizer’s ad campaign, frank discussions in the media, jokes aplenty from late night talk show hosts and grassroots word-of-mouth, Viagra’s sales zoomed skywards like, er, the private parts of its growing legion of users. After just three years in the marketplace, Pfizer had raked in over $1 billion worth of sales. Indeed, the “Little Blue Pill” arrived with a bang and the banging just goes on and on – with no signs of it petering out. 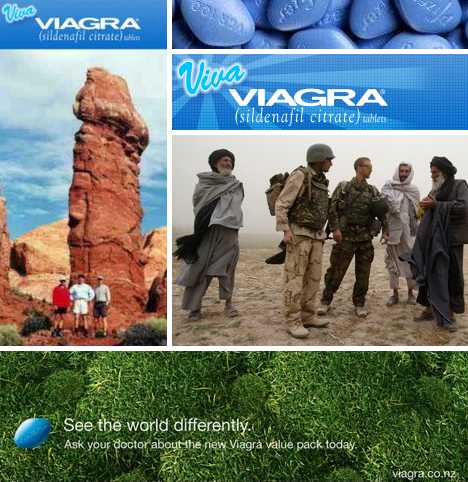 Viagra has even been employed to stiffen our resolve in the War On Terror. It seems that in December of 2008, rumors began making the rounds to the effect that the CIA had been supplying Viagra to older Afghan tribal chieftains. What they received in exchange was “a bonanza of information about Taliban movements and supply routes.” Harem scarem indeed! 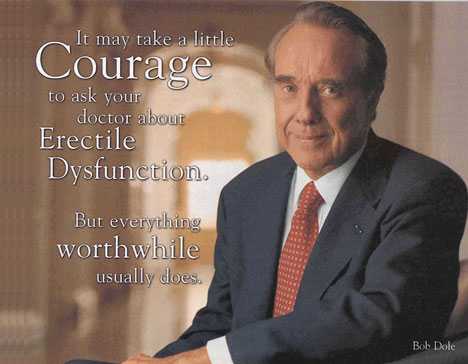 Yet not all was bright and rosy in the new, non-dysfunctional world Viagra has given us. In fact, there are several parties worried about the ways society has changed due to the Little Blue Pill. Criticism began as soon as ads for Viagra began flashing across our TV screens. Bob Dole, for example, was criticized for lending his name and reputation to topics that made some folks squeamish.

Here’s a commercial featuring Bob Dole in which he credits “my faithful little blue friend” for restoring his enjoyment of life… it’s not quite what you were thinking:

Dole aside, just the fact that commercials mentioning ED, erections and associated issues were playing in prime time sparked a backlash among pro-family organizations and advertising watchdog groups. 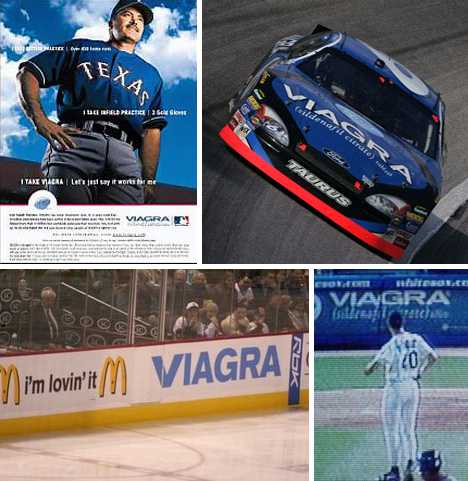 (images via: OddJack, How Stuff Works, PharmaGossip and One Man’s Blog)

Of course, television commercials aren’t the only way sponsors can get their message onto your TV screen. Next time you watch a sports event, don’t be too surprised if six blue letters beginning with V appear on a baseball backstop, the boards at an NHL hockey game or splashed across the side of a NASCAR racer. Even though MLB ended their sponsorship with Viagra in 2007 due to changes in pharma TV guidelines, stadium and arena owners presumably are free to accept paid advertising from anyone who’s willing to pay for it. 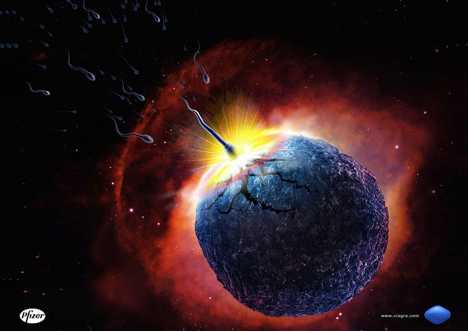 Associating one’s product with sports is one way to impart a sense of power and virility. Another way is to simply whip up the most powerful ad EVAR (above), as ad agency Dentsu did for Viagra in China. Yes, China, an overpopulated country of over a billion people that has instituted a one-child policy to put a lid on new kids. Go figure. 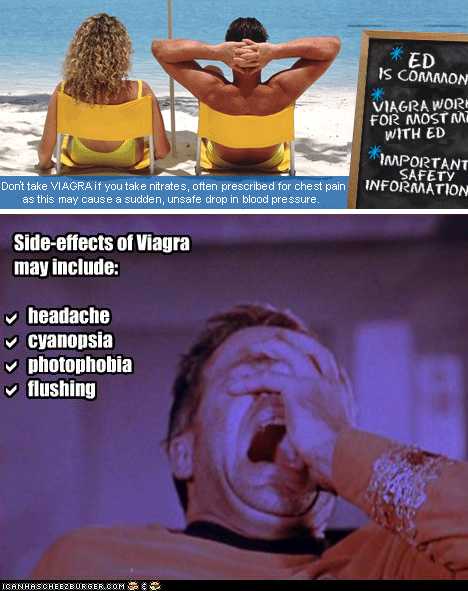 Complaints about marketing are one thing, problems with Viagra itself are another and it didn’t take long before the mainstream media was playing quite a different tune: the blues, to be exact. A few high-profile cases highlighted side effects and contraindications noted by Pfizer in Viagra’s clinical trials. One of the oddest of these was Cyanopsia – a medical term that describes seeing everything tinged with a blue tint. Other vision issues include photophobia (excessive sensitivity to light), impaired vision, blurred vision and loss of peripheral vision. Viagra and its competitors, including Cialis and Levitra, may induce the expression of other unwanted effects that may include headaches, sudden hearing loss and a range of heart-related problems.

Thrill Pills For Bills… and Jills 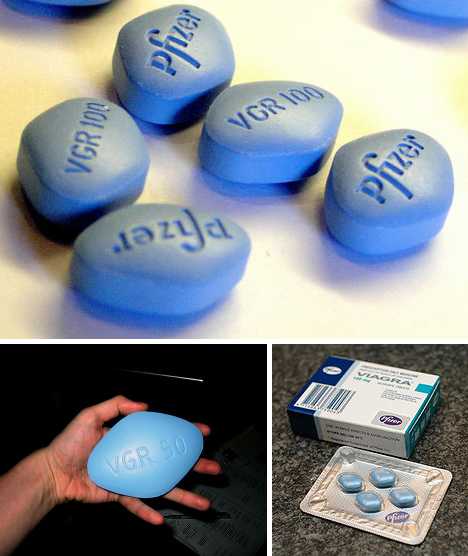 Viagra’s superlative success and cheeky ads have been admired by competitors both legitimate and otherwise – if one follows the old maxim “imitation is the greatest form of flattery.” Consider that sales of Viagra accounted for a whopping 92 percent share of the total market for prescribed erectile dysfunction pills. All good things must come to an end, however, and by 2007 Viagra’s global share of the ED-treatment market had deflated to around 50 percent. Still, that’s still a hefty slice of a huge “pie”. 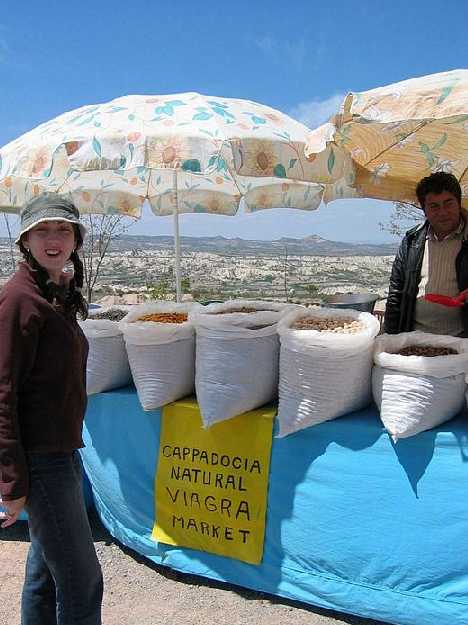 Viagra has dominated the ED-treatment market to the point where its brand name is becoming a descriptive term: generic Viagra, herbal Viagra, natural Viagra and more. Email spammers found Vitamin V to be a lucrative lure for lovelorn ‘net lurkers who just can’t help clicking that link. 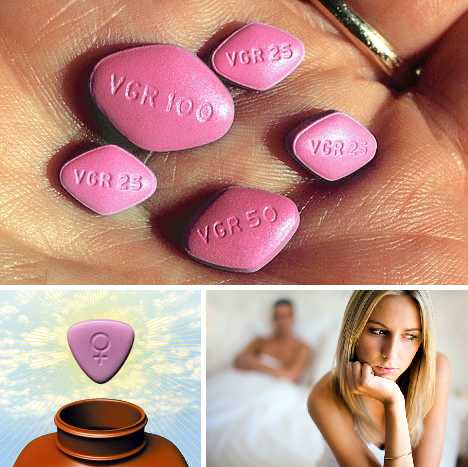 Huge market notwithstanding, Pfizer’s finest finds its foremost friends in just 50 percent of the population. Could there be a counterpart to Viagra that fans the fires of the fairer sex? A “Female Viagra”, as it were? A quick Google search turns up abundant references to Little Pink Pills, many of them sporting the same rounded diamond shape as its original inspiration though a few go for the more obvious heart shape. 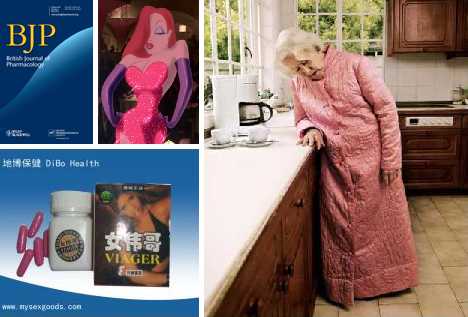 Pfizer itself hasn’t been asleep at the switch when it comes to Female Viagra. A study published in the April 13, 2010 issue of the British Journal of Pharmacology describes “UK-414,495, a selective inhibitor of neutral endopeptidase, potentiates pelvic nerve-stimulated increases in female genital blood flow in the anaesthetized rabbit.” Yes, rabbit – being a Pfizer pharmacologist isn’t as much fun as one might think. Is an actual Female Viagra on the horizon? Pfizer isn’t saying… and neither are those rabbits. 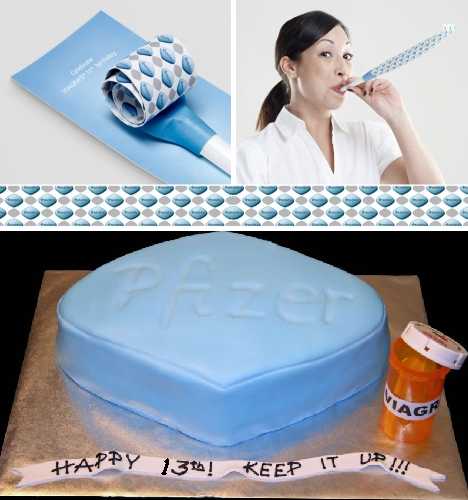 (images via: Ads of the World and Cake Central)

Pfizer has always taken Viagra’s humorous aspects in stride, which is perhaps easy to do since the revenues keep pouring into the company’s coffers. The item above makes a great way to close our look at the pill that brings America’s sweethearts back together: it’s a Viagra-themed party blower. Pfizer commissioned Canadian advertising agency Taxi to design the blowers, which were given out to internal sales teams in honor of Viagra’s 11th birthday. Why a party blower? Well, you blow into it, it unrolls… and you get the picture. Happy Birthday, Viagra, and here’s hoping all your good times will be hard times!