In bustling cities packed with other people, it can be nice to stand out at times, but it can also be a relief to fade quietly into the background for a bit. Creative wallflowers looking for a bit of both draw on all sorts of inspiration to create urban camouflage that ranges from virtually invisible to fashionably outstanding. 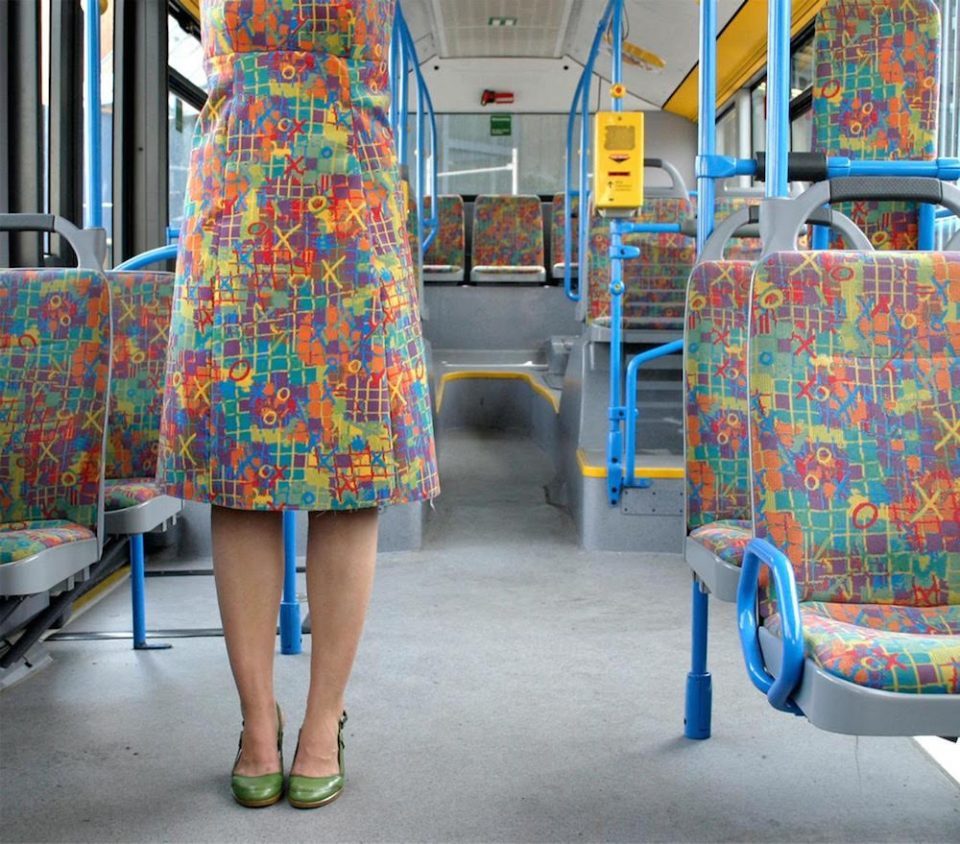 Take Menja Stevenson, a German artist transfixed by public transit textiles. Often overlooked or outright disliked by others, she found that he patterns applied to train and bus seats are quite intensively and cleverly designed. 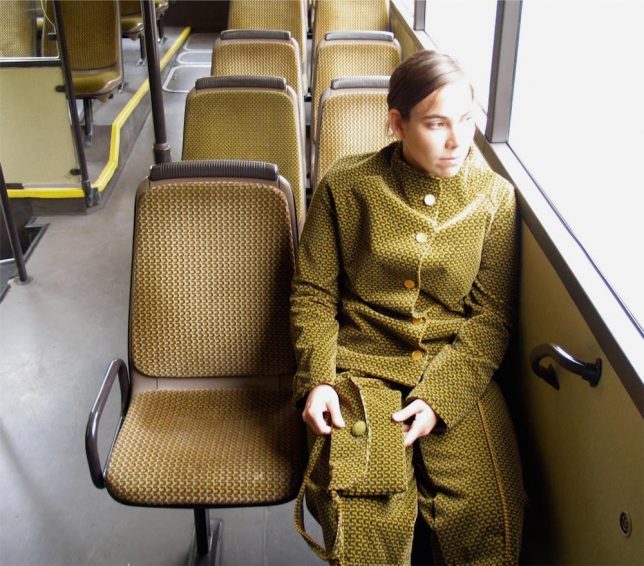 Transit fabrics have a job to do, standing up to wear and tear while mitigating the visible impact of dirt, stains, spilled drinks and other challenging conditions. So Stevenson contacted transportation agencies to secure fabric samples, then started making outfits based on these generally unloved textiles. 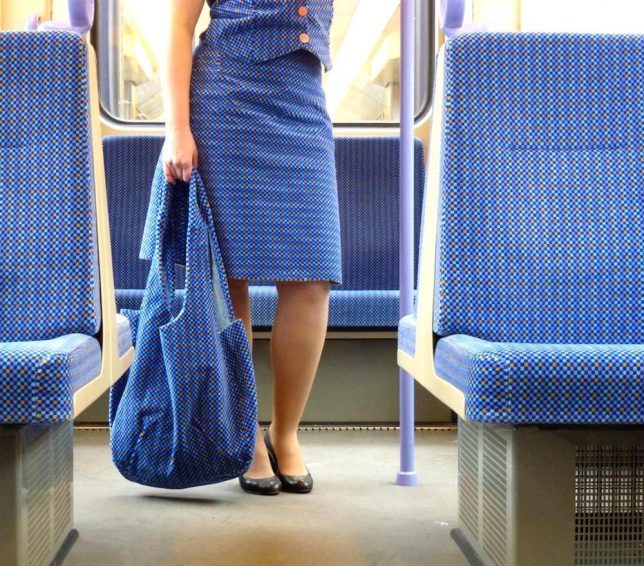 Ironically, though, this kind of camouflage actually makes the wearer stand out, whether they are sitting in a pattern-matching seat (a juxtaposition which can look rather surreal) or simply striding down the street (clad in what are relatively unusual patterns). 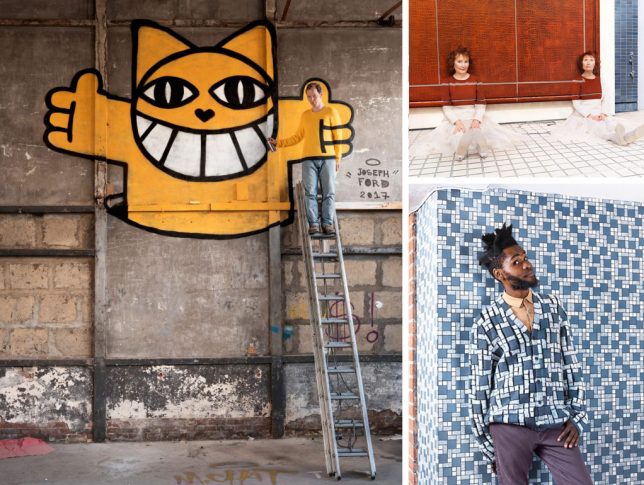 Photographer Joseph Ford combined forces with knitter Nina Dodd to take a similar idea a step further, crafting apparel to match a variety of urban backdrops related to transportation and otherwise. For their project, they borrowed colors and patterns from tiles, bricks, even a graffiti mural. 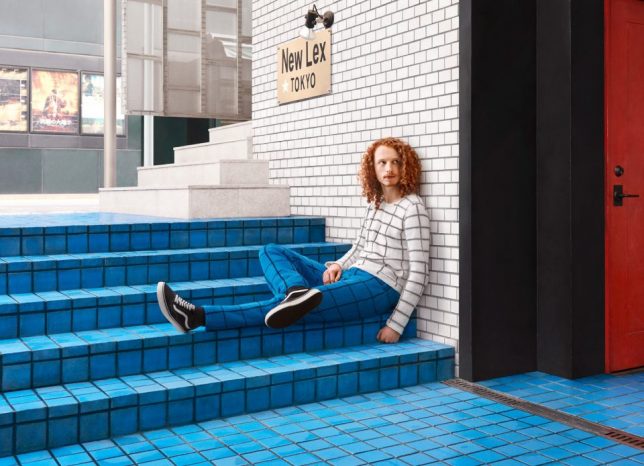 The resulting camouflage is still very context-specific, but taken to other locations the the results actually start to blend in — seen on the street, it would generally be hard to guess that these subjects were wearing designs lifted from public places. 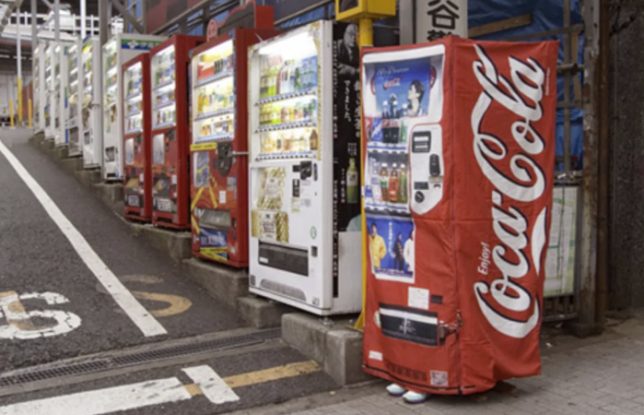 Of course, visual and material patterns aren’t the only repeating elements in cities that one could use as a basis for concealment. Physical objects like soda machines and waste bins also proliferate, adding an opportunity for immersive camouflage that can works in three dimensions. 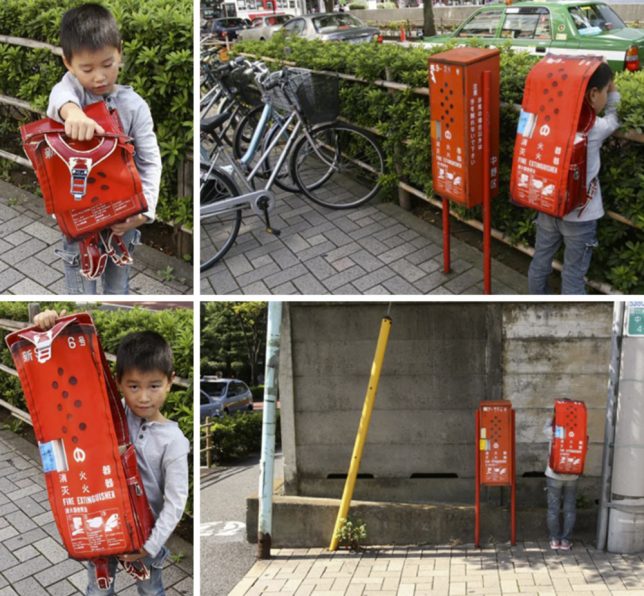 Designer Aya Tsukioka took her disguises to the next level when she created a set of suits and backpacks aimed at mimicking the size, form and details of everyday urban objects. Since the specifics of such designs vary from city to city, they may not match their setting anywhere else, but these outfits are right at home in Tokyo. 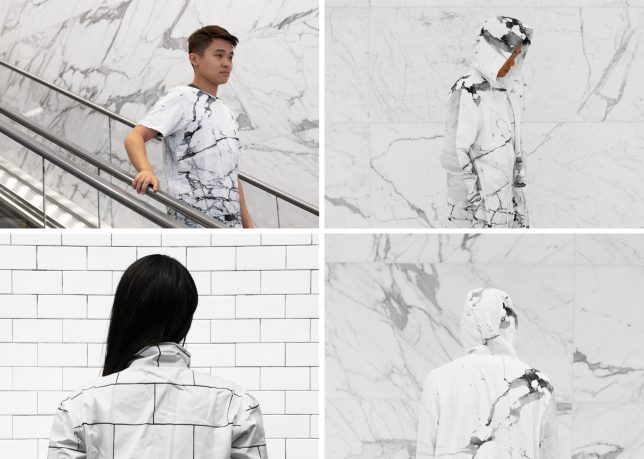 If machine suits represent the maximalist end of the camouflage spectrum, emulating complex patterns and larger objects, these black-and-white wearable architectures designed by Snarkitecture are definitely more on the minimalist side. 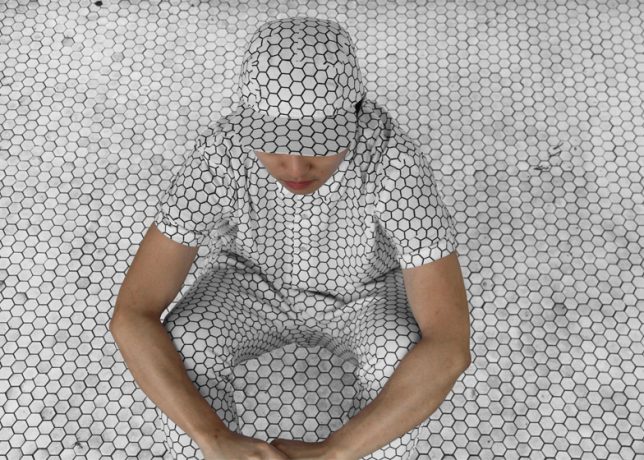 Copied from rectangular, hexagonal and marbled surfaces around New York City, one would be hard-pressed to guess that architectural surfaces inspired these shirts, hoodies and hats. 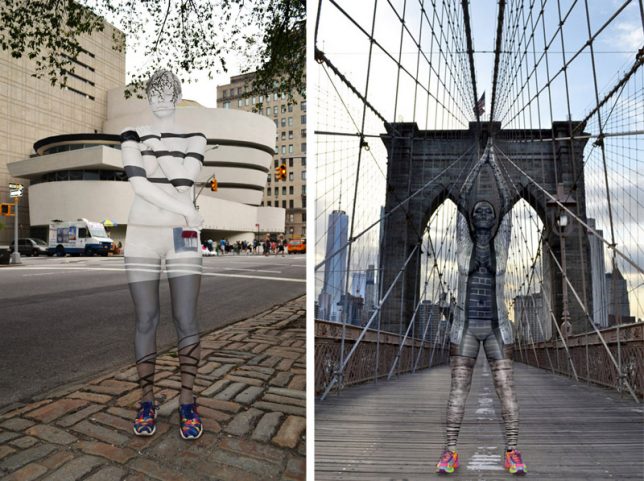 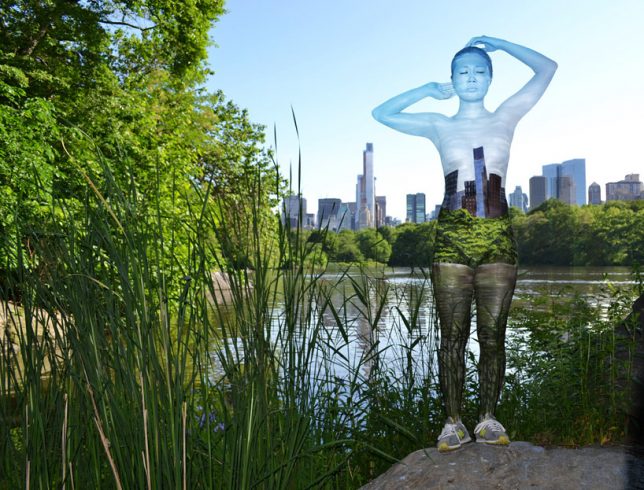 Not to be outdone, other New Yorkers have taken urban camouflage beyond textiles and into the realm of body paint, enabling levels of detail and precise blending that are as context-dependent as they are mesmerizing. 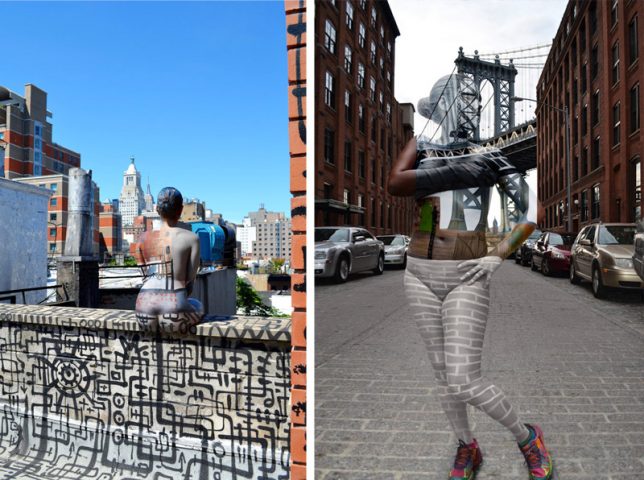 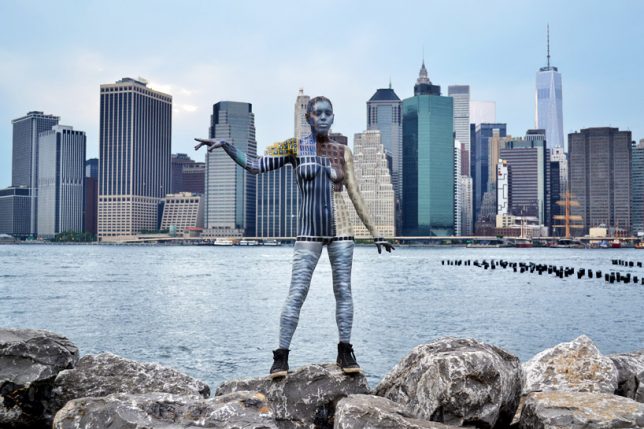 Artist Trina Merry takes personalized trompe l’oeil to the third dimension, first in the Big Apple and then beyond. For her photos, she places figures in front of architectural icons and everyday cityscapes, painting people to match bricks, concrete, steel, graffiti, trees, wavy water or whatever is needed to complete the illusion. 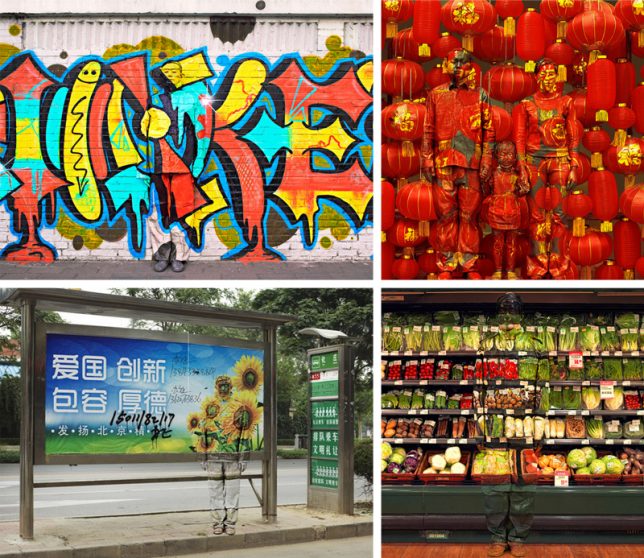 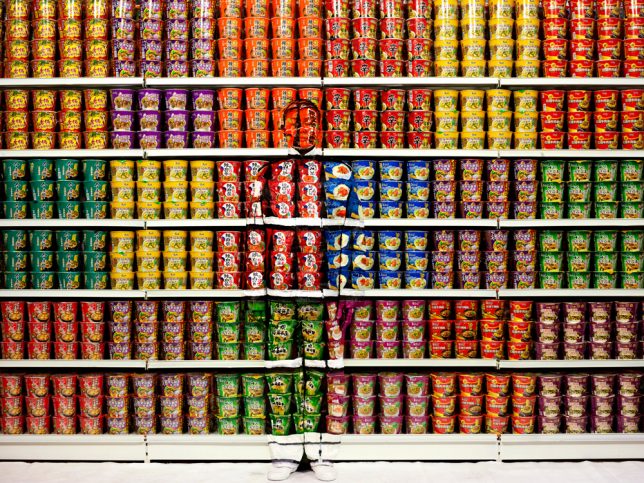 No story mentioning body-painted urban camouflage artists would be complete without Liu Bolin, whose work borders on uncanny at times, looking more like the product of Photoshop than photography. His pictures may be fun and entertaining, but they are not without serious and controversial dimensions. In this past, he has had run-ins with the Chinese government — at one point, police even shut down his studio for including state buildings, uniforms and other official design elements. 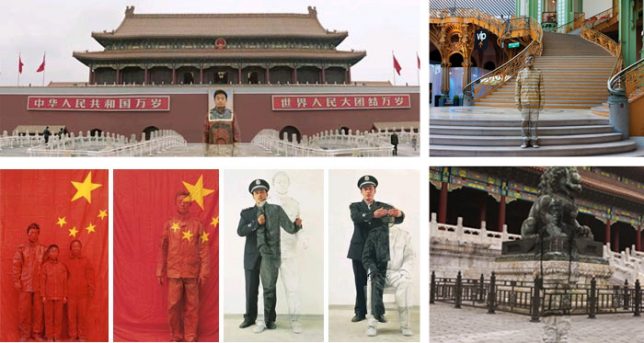 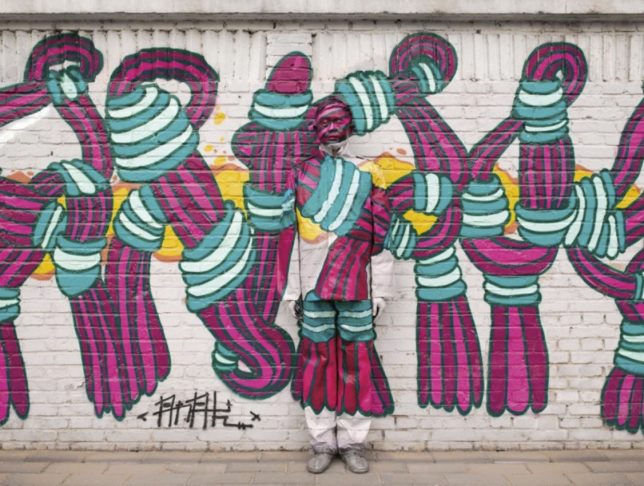 “Living in the red hot China,” says Bolin, “I feel that I am not in control of my own life. However, I have an indescribable burning desire inside of me. Art is a weapon that helps us untangle the chaos in our lives. I hope that my artworks can calm people down during this period of constant change, but at the same time, inspire people to re-evaluate our environment and reconsider the problems arising in our society.” 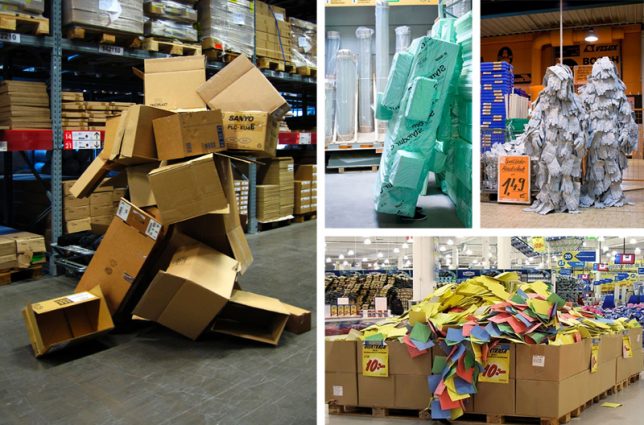 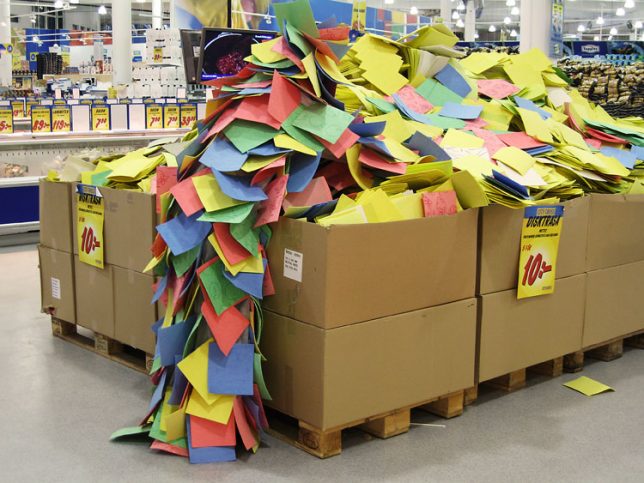 Context is of course the key to camouflage, which is part of what makes it such a powerful tool for artists seeking to speak to certain times, places and conditions — like the mass-produced repetition of stuff for sale in big retail stores, illustrated above. From body paint based on decorative wallpapers to ghillie suits designed to blend into supermarket sales bins, there can be more to an urban disguise than meets the eye. 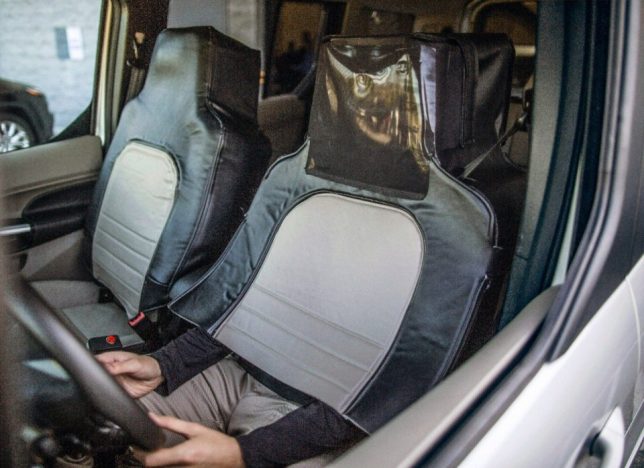