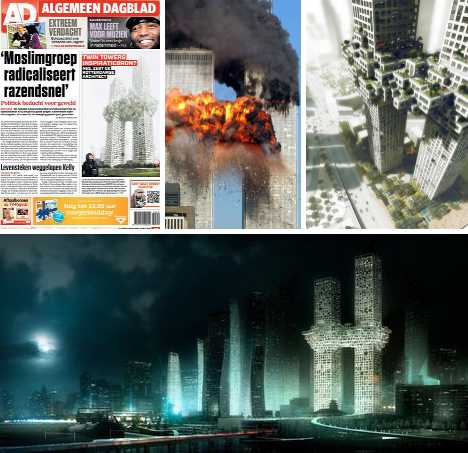 Korean Twin Towers FAIL? It would definitely appear so, though Dutch architects MVRDV strenuously deny any connection, inspirational or otherwise, with New York City’s lost World Trade Center towers. “The Cloud” is due to rise in Seoul by 2015 – that is, unless a storm of controversy blows the plan away. 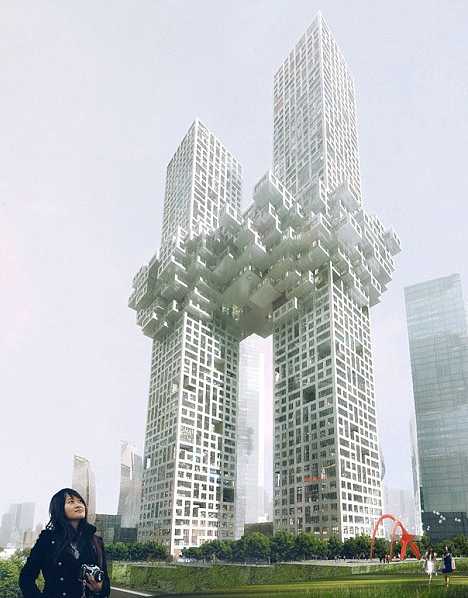 Imagine if you will, an architectural combination of Moshe Safdie’s Habitat 67 (below) and a pair of towering skyscrapers. The result will likely resemble “The Cloud”, an ambitious high-rise apartment building designed by Dutch architects MVRDV. Current plans predict the post-modern structure will occupy a prime portion of the Yongsan Dreamhub project in Seoul, South Korea, by its 2015 completion date. 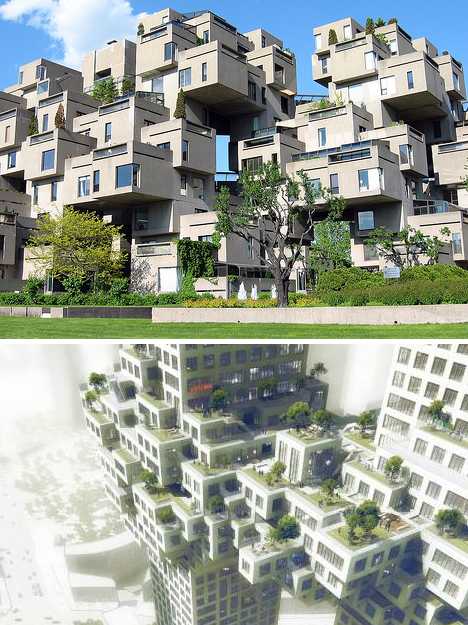 (images via: Rezendi and The Blaze)

The Yongsan Dreamhub project is an extension of Seoul’s business district; the master plan is one of 40 projects currently overseen by Studio Libeskind. 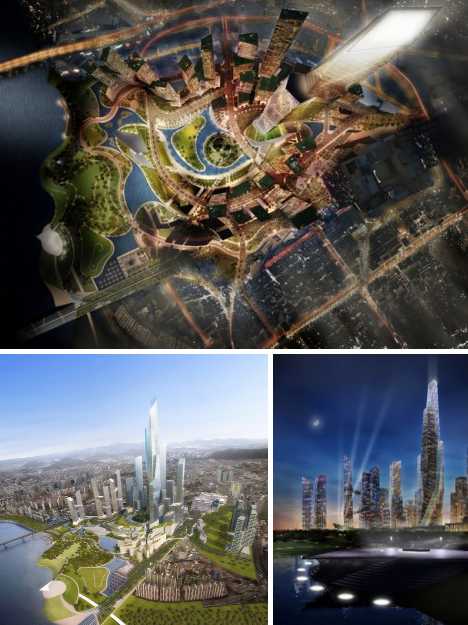 (images via: Archivenue and DesignBoom)

Big H with ELL to Pay 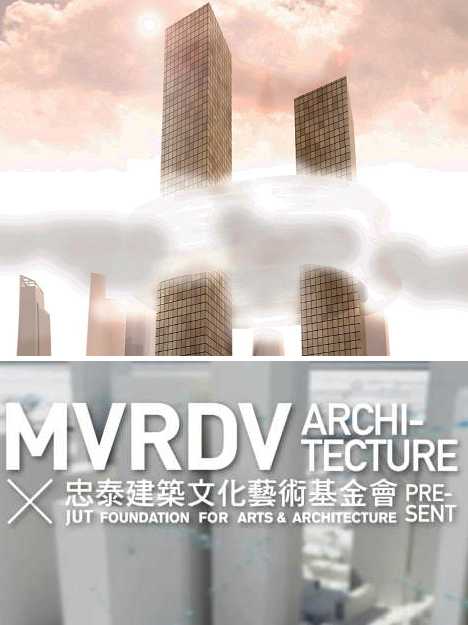 (images via: Domus and WN.com)

On the face of it, the H-shaped “The Cloud” displays both practical design considerations and a visible form that places it firmly in the so-called “deconstructionist” aesthetic common to many of Daniel Libeskind’s works. Libeskind, however, has no direct connection to this part of the project as it was subcontracted out to Dutch firm MVRDV. 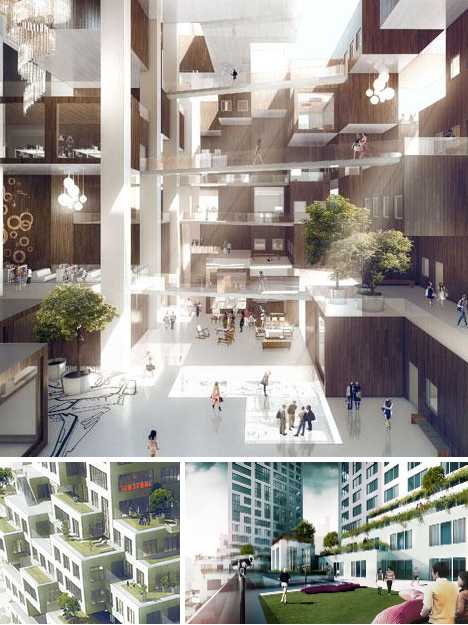 (images via: Architizer and Archinect)

“The Cloud” is no small undertaking. The 54-floor and 60-floor towers rise to heights of 260 meters (853 ft) and 300 meters (984 ft) respectively, offering 128,000 square meters of living space. Roughly halfway up the towers centered around their 27th floors, a 10-story “cloud” connects the two towers in a similar fashion to the ground-level common plinths found in many multi-building developments. 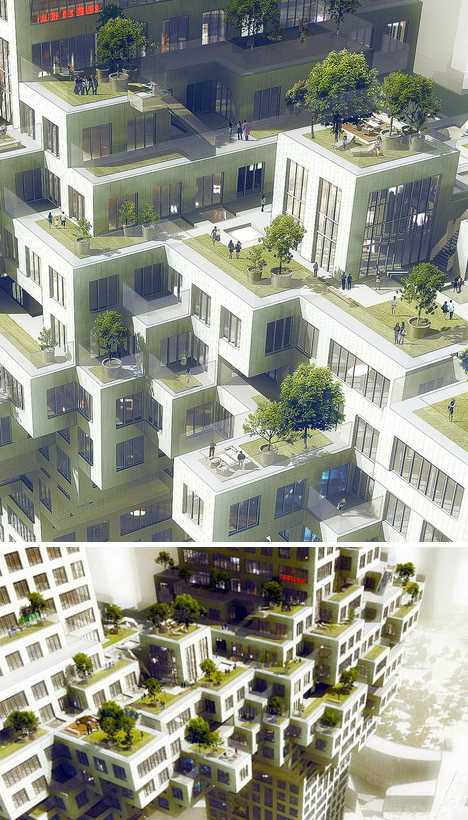 (images via: Archinect and The Pop-Up City)

By raising the plinth skywards, the formerly occupied ground floor space is freed for other purposes, in this case a landscaped public garden designed by Martha Schwartz. Over 14,357 square meters of amenities are located in the connecting cloud including a wellness center, conference center, fitness studio, pools, restaurants and cafes. 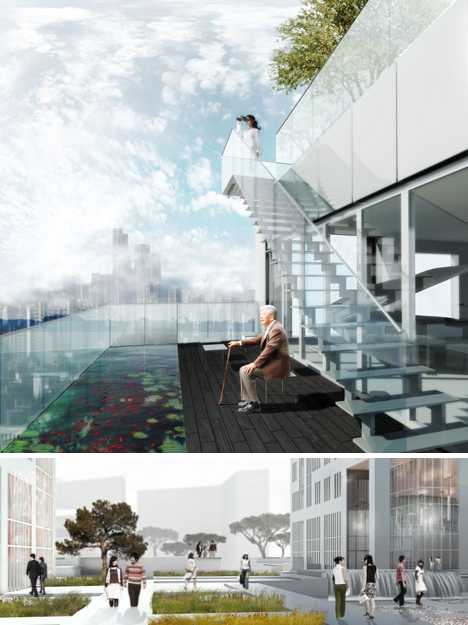 (images via: DQNplus and Occult Propaganda)

The top surface of the tower-connecting cloud is also utilized and features an extensive series of easily accessible public and private outdoor spaces, open-air patios, sun decks, gardens and swimming pools. What could possibly go wrong? 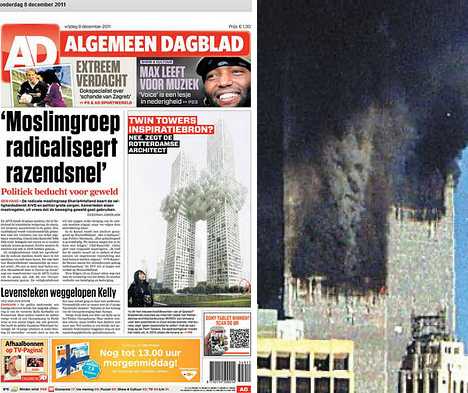 (images via: Google+ and 911WhoDidIt)

Call it a mass case of pareidolia (seeing faces and images where none exist) or an unintentionally evocative design, but a furor quickly arose when images of “The Cloud” were first published. Regardless of intent, the resemblance of MVRDV’s design to New York’s twin WTC towers in flame is obvious – no matter that said resemblance appears even closer once one is made aware of it. 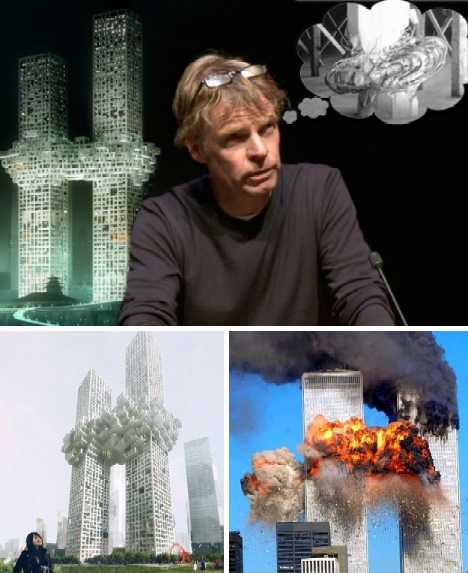 MVRDV (architect Winy Maas, above) was seemingly caught unaware by the disturbingly evocative similarity of “The Cloud” to the 9/11 disaster and have strenuously protested claims their design intentionally imitates the lost Twin Towers in flame. To quote a posting on MVRDV’s facebook page, “A real media storm has started and we receive threatening emails and calls of angry people calling us Al Qaeda lovers or worse. MVRDV regrets deeply any connotations The Cloud project evokes regarding 9/11, it was not our intention.” 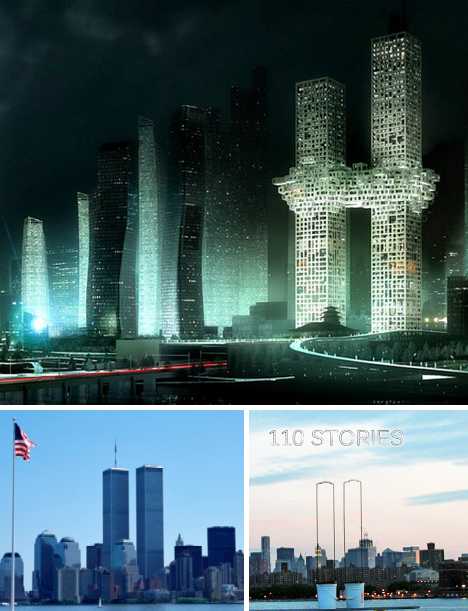 The posting continues, “The Cloud was designed based on parameters such as sunlight, outside spaces, living quality for inhabitants and the city. It is one of many projects in which MVRDV experiments with a raised city level to reinvent the often solitary typology of the skyscraper. It was not our intention to create an image resembling the attacks nor did we see the resemblance during the design process. We sincerely apologize to anyone whose feelings we have hurt, the design was not meant to provoke this.” 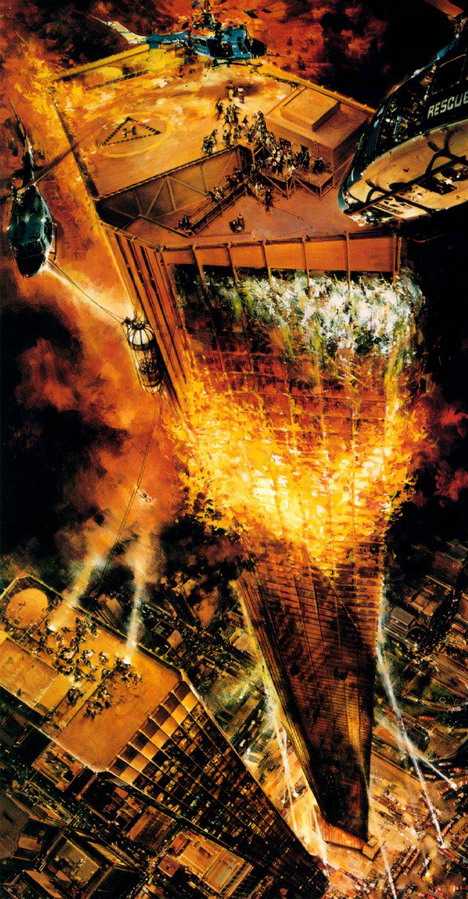 Beyond the above apology, MVRDV is distancing themselves from the ruckus by stating any decisions regarding the implementation of their design are strictly for the client to decide. That being said, Seoul is a long way from Manhattan and those who will live in and around “The Cloud” may not have negative feelings about the building’s appearance. Even so, would you want to live in a building that looks like the scene of a massive terrorist attack – or a 1974 Hollywood disaster movie?