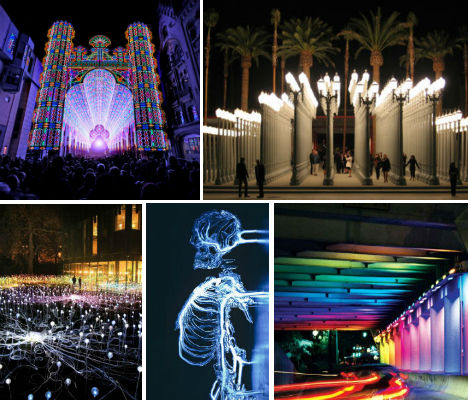 Light might just be the most captivating art medium of all, capturing our attention and transforming spaces in a way that paint can’t. Some artists use it in combination with long-exposure photography techniques to produce surreal, ghostly light graffiti, while others – like these 15 (more!) sculptors and installation artists – integrate it into physical forms using LEDs, lamps and even glowing gases. 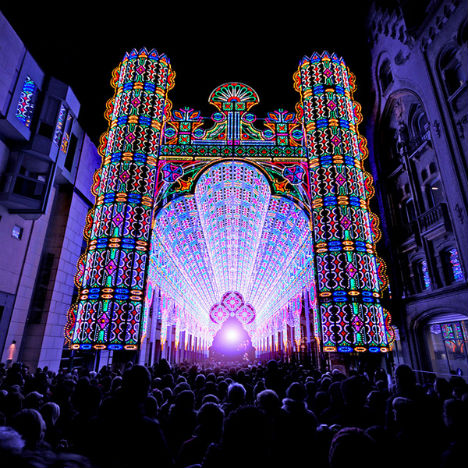 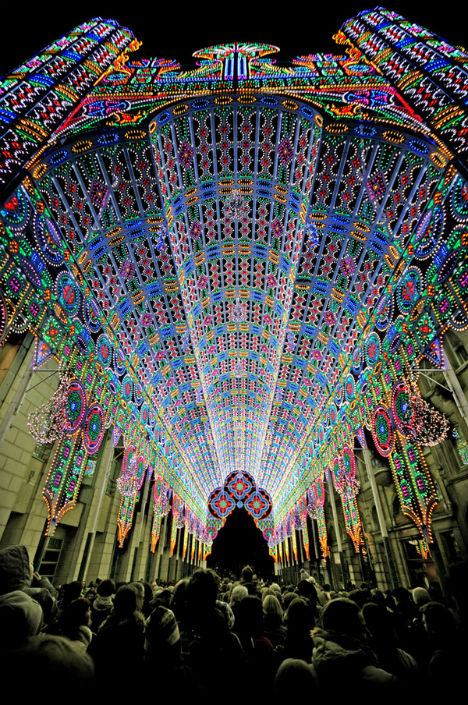 Towering nearly 100 feet into the air, this cathedral is made up of 55,000 LED lights. Cagna Illumination’s light cathedral was designed as an entrance for the 2012 Light Festival in Ghent, Belgium. Because LED lights are so energy-efficient, the entire display consumed only 20 kilowatts per hour.

The Man with No Shadow by Makoto Tojiki 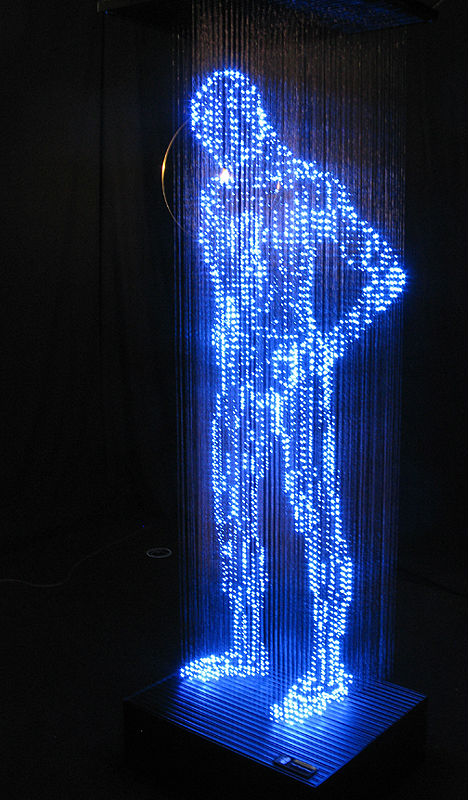 Makoto Tojiki’s The Man with No Shadow is a life-sized LED sculpture made for Tojiki’s stand at SaloneSatellite in 2009. The three-dimensional figure was created by adding lights to strategic spots on strings that were stretched between to flat surfaces. 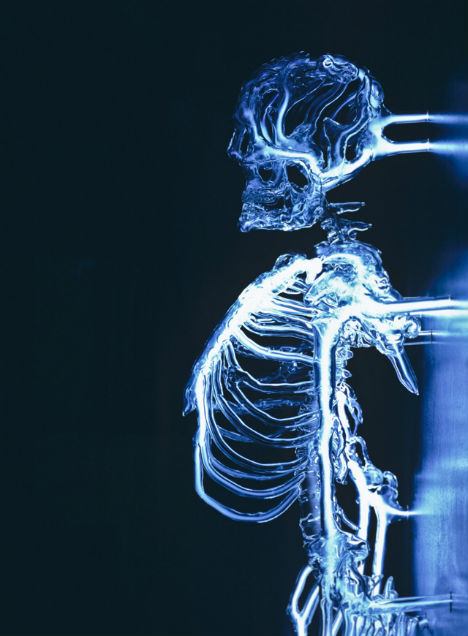 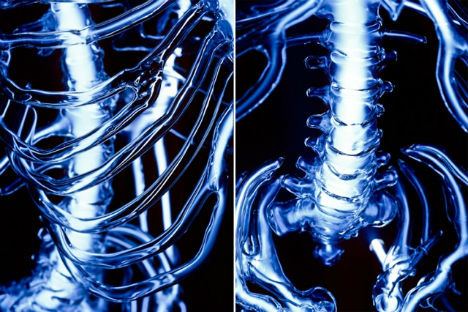 (image via: this is colossal)

It took artist Eric Franklin over 1,000 hours over two years to create this incredible glowing glass skeleton. Entitled ‘Embodiment’, the sculpture is made from 10 separate units of glass formed from borosilicate glass tubing. The skeleton is filled with krypton to create a neon-like glowing effect. Franklin told This is Colossal that the process was extremely painstaking, and that the joints of the glass tubes have to be perfectly sealed to preserve the luminosity of the krypton.”Once the glass pieces are ready to get filled with gas, I pull a high vacuum while the glass is hot in order to evacuate any dust or water vapor from the interior surface until there are literally no molecules inside the void of the glass.” 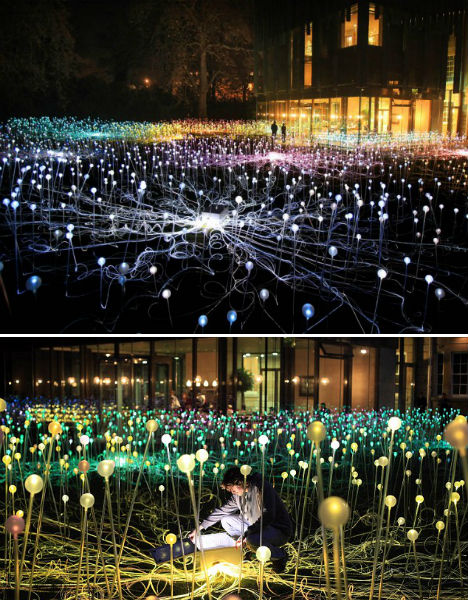 (image via: field of light)

More than 5,000 Christmas lights were placed atop acrylic stems to create a surreal, glowing field of illuminated ‘flowers’. Artist Bruce Munro experiments with light in bold and exciting ways, and this installation – ‘Field of Light’, pictured here in front of the Holbourne Museum in 2011 – has a futuristic feel to it. 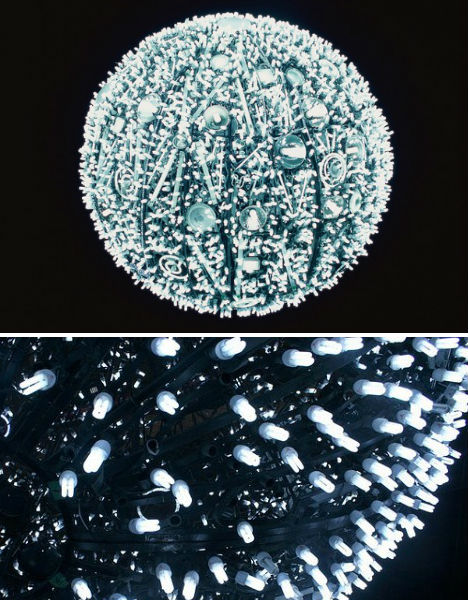 Measuring over 13 fee wide, this globe of light hung over a Shanghai street to call attention to the problem of light pollution, which makes it difficult to see the actual moon in the sky. Artist Wang Yuyang placed the lights in configurations that mimic the ridges and craters that can be seen on the surface of the moon. 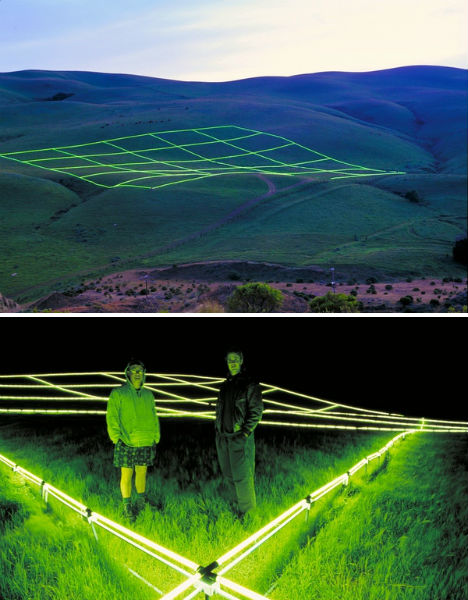 1,680 energy-efficient fluorescent lamps were used to create a massive grid covering over 10 acres of hilly landscape 50 miles north of San Francisco in 1993. Artist Stuart Wiliams, who raised nearly half a million dollars to create the installation, says “I see the project as a poetic statement on the potential harmony between technology and nature.”

Something and Nothing by Keith Lemley 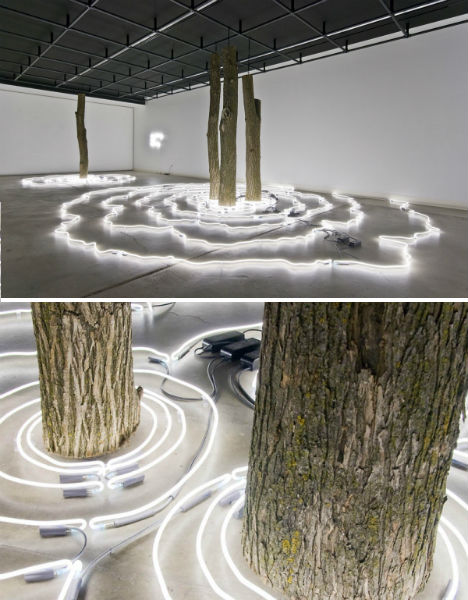 Concentric rings of neon lights mimicking those of trees spread out from a trio of trunks in the ‘Something and Nothing’ installation by Keith Lemley, seen at the 1708 Gallery in Richmond, Virginia in 2011. The gallery states, “By combining the everyday occurrence of perceiving light with an unusual delivery method, Something and Nothing calls attention to ‘the phenomenology of sight, the physiology of perception, and the experience of being a living body in space.'”

Big Round Cubatron by Mark Lottor 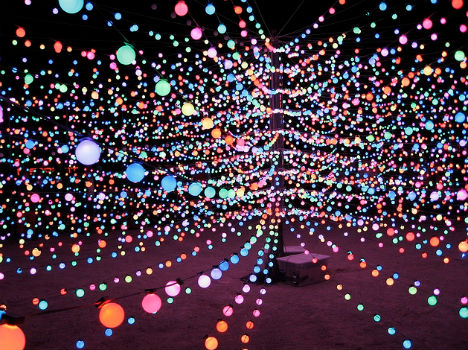 Seen at Burning Man in 2007, the Big Round Cubatron is the world’s largest three-dimensional, full-color ‘dynamic’ light sculpture. It measures 40 feet in diameter and 10 feet high, consisting of ten spokes covered in 6,720 lights made of over 20,000 LEDs. 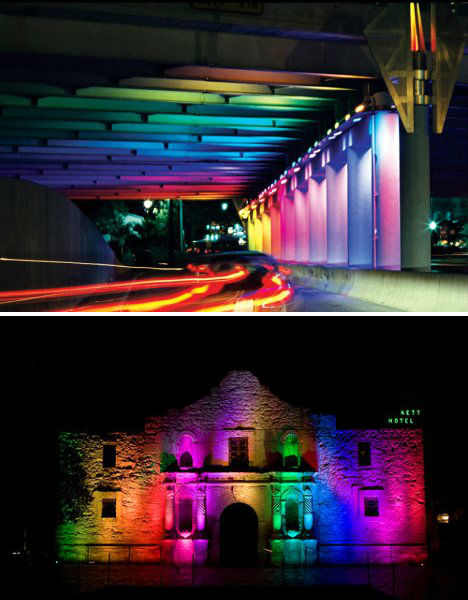 Prominent street artist Bill Fitz-Gibbons specializes in creating neon-light displays in urban areas. Mundane overpasses come to life with vibrant colors that turn everyday concrete structures into gorgeous works of art. The effect is make possible by large light projectors that cast the light at just such an angle as to reflect as you see it. 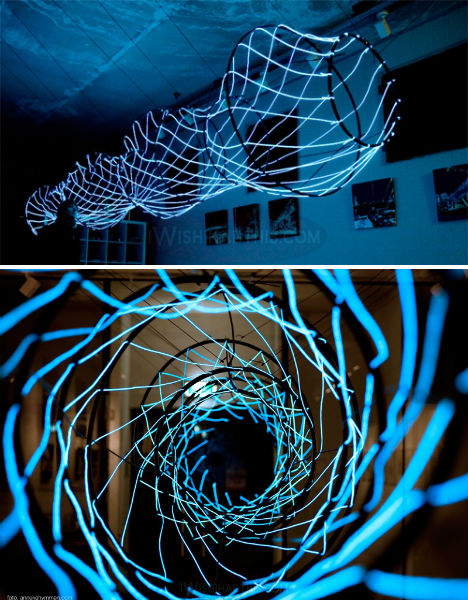 (images via: i wish i had this)

Applied art engineer Paul Klotz specializes in interactive light installations for public spaces. This particular work, entitled Tunnel Vision, responds to viewers’ hand movements by changing both color and sound output. When the gallery space is empty, the sculpture – which consists of a six-meter modular lightline – acts as a thermometer, representing the temperature of the space with its colors. 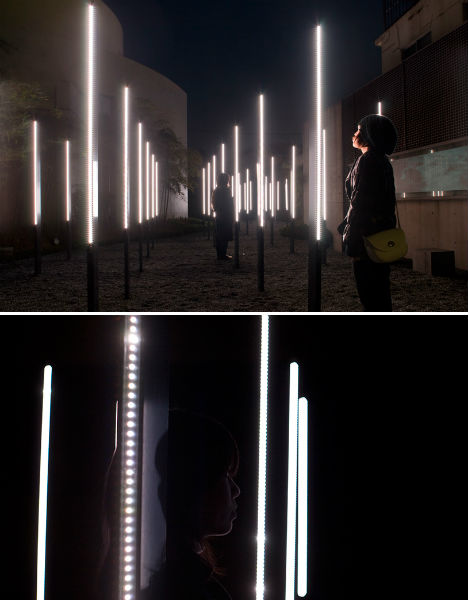 Comissioned by the Yamaguchi Center for Arts and Media in Japan, ‘Array’ is an interactive light installation featuring a field of LED strips that interact with visitors. Created by United Visual Artists (UVA), the lighting installation shifts in response to the viewers’ movements using hidden ultrasonic sensors. Says UVA, “Inside the grid lives a spirit, in the form of a single pure red light. This spirit is timid but often playful, revealing itself boldly then disappearing.” 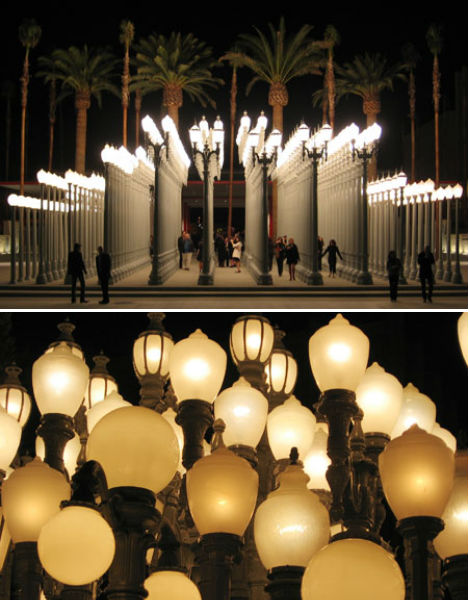 (images via: art and perception) 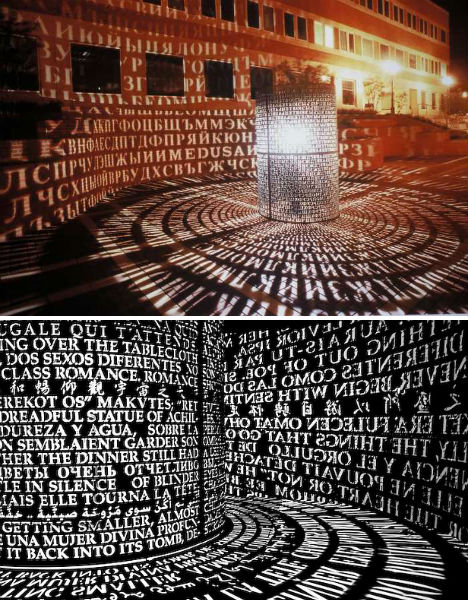 Sculptor Jim Sanborn, who created the famously untracked ‘Kryptos’ cipher that stands in front of the CIA headquarters in Langley, Virginia, installed another sculpture at the University of Houston. Called ‘A,A’, the metal sculpture is printed with snippets of poems, novels and prose from languages around the world. The sculpture is lit from the inside at night to cast the messages onto nearby surfaces. 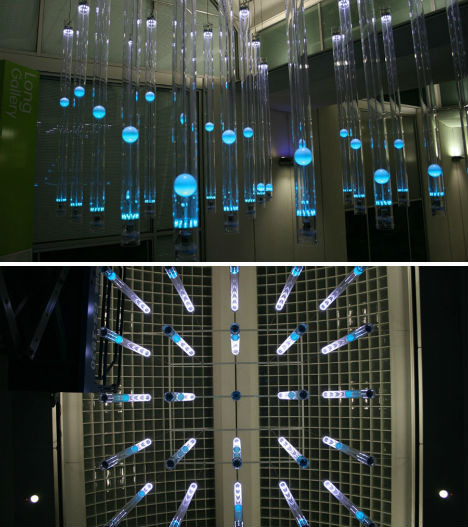 Responding dynamically to the weather, ‘Anemograph’ at the Sheffield Millennium Gallery in England features colored lights that fluctuate according to changes in the speed and direction of the wind. The artwork is connected to a weather sensor on the gallery roof, which relays data to a control system that drives fans to each tube. 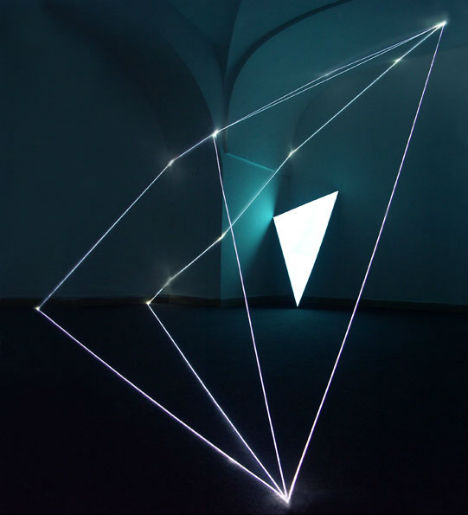 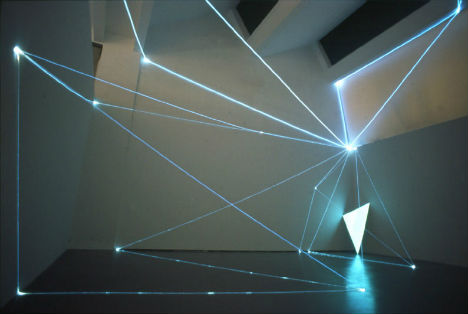 Rome-based artist Carlo Bernardini creates environmental, abstract fiber optic installations based on rhomboidal or triangular forms. The lights come together as three-dimensional shapes when you stand at a certain vantage point.