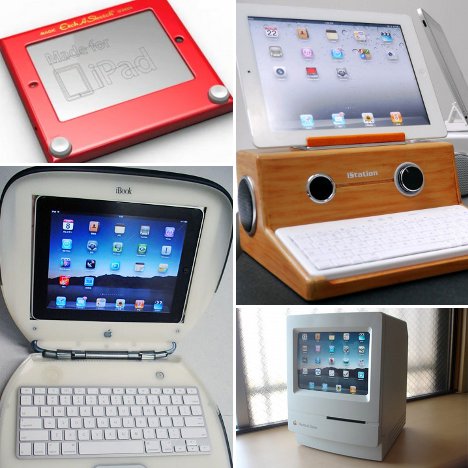 The iPad is one of Apple’s most successful products in recent years, and for good reason. It’s an innovative, easy-to-use, and fun bit of technology that everyone can enjoy, from babies to cats to technophobic adults as well as the typical dedicated technology lover. But this high-tech futuristic gadget inspires some people to embrace the past by creating retro-inspired cases and accessories. 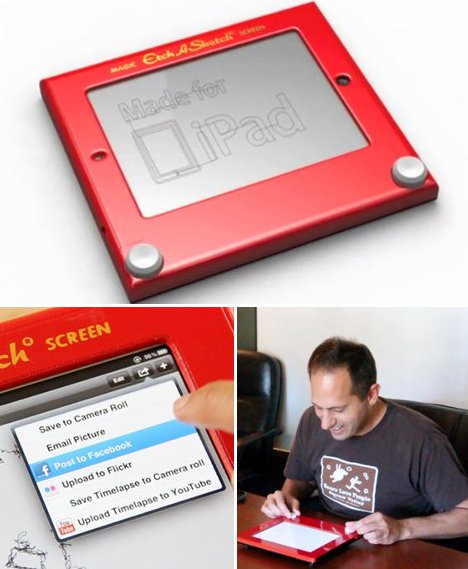 The Etcher is an iPad case that turns your high-tech toy into a well-loved but low-tech one. The case was developed to work just like a classic Etch-A-Sketch, but with some nifty added features like the ability to save your sketches or post them on Facebook. 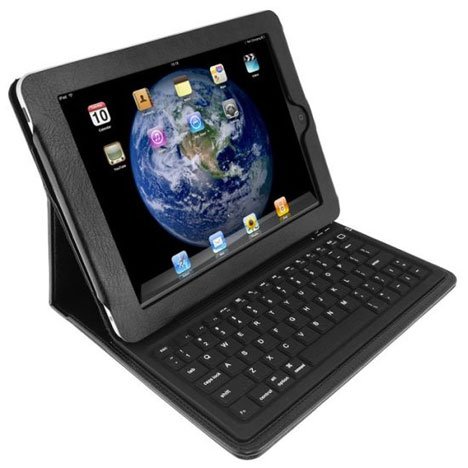 If you’re used to using a laptop and are having a hard time adapting to the unique feel of using a tablet, the KeyCase iPad Folio helps ease the transition. It effectively turns your iPad into a laptop, giving it the familiar configuration with an integrated keyboard and a protective outer covering. 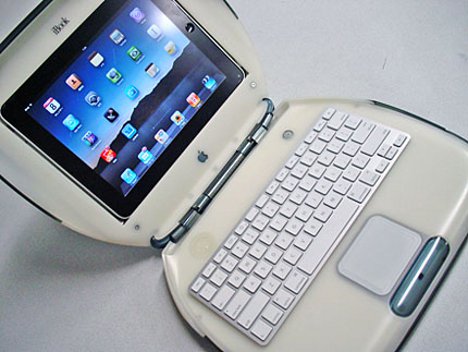 Prior to the sleek, no-nonsense form factors of the iPhone and iPad, Apple’s iconic products often took on curvy futuristic shapes like the iBook. Here, the two generations of Apple products meet in a quirky recycling project that uses an old iBook as a functional carrying case for both an iPad and a (fully functional) Apple keyboard. 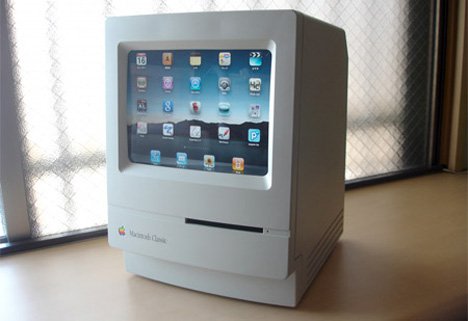 Even before the iBook, the classic Macintosh defined Apple’s style. One blogger was surprised to find that the first-gen iPad fits nearly perfectly in the place of the Mac’s screen. So, like any loyal Apple fan, he tore apart the classic computer and updated it with an iPad right where the screen used to be. The design does have some flaws, but overall this case is playful and functional. 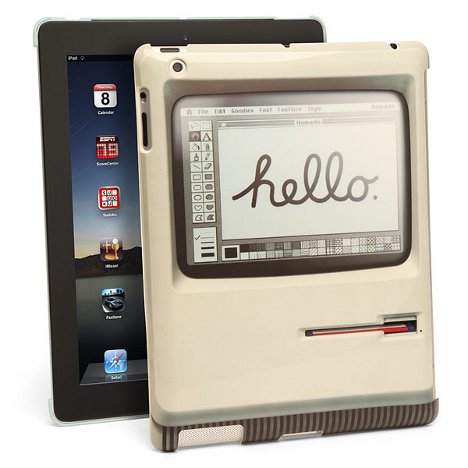 For the same retro Mac look in a portable form, ThinkGeek offers the Padintosh case. It looks just like the front of a classic Mac, even including the disk drive on the front. The hard case protects your iPad from bumps and drops while giving it a unique retro look. The only drawback? The case drastically cuts down on the usable screen area of the iPad. 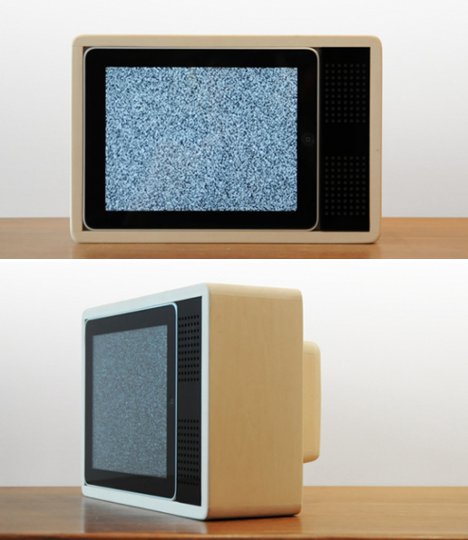 The iPad’s super-thin profile is really a testament to just how quickly technology has moved in the past several decades. Designer Jonas Damon juxtaposes the modern iPad with one of the much thicker, much clunkier pieces of technology from previous years. The CRT (cathode ray tube) iPad dock looks like one of the old thick pre-LCD, pre-plasma TVs that were once in every home – and it makes for a pretty cool place to rest your iPad while you watch some retro TV shows. 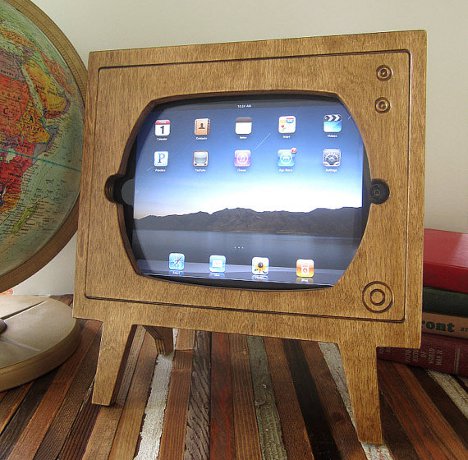 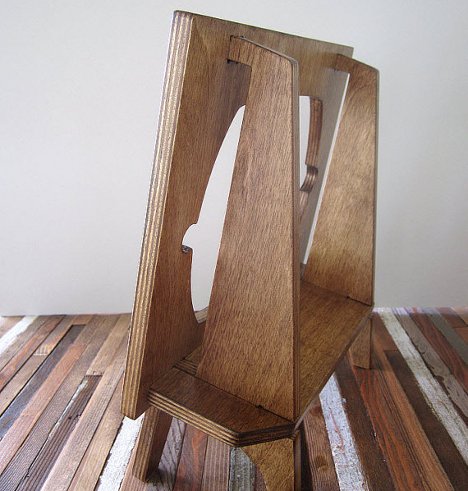 The retro TV aesthetic takes a slightly different turn with this handmade stained wood TV iPad dock from Etsy seller Miterbox. The stand is slim and simple, designed to give the iPad an awesomely fun place to sit. 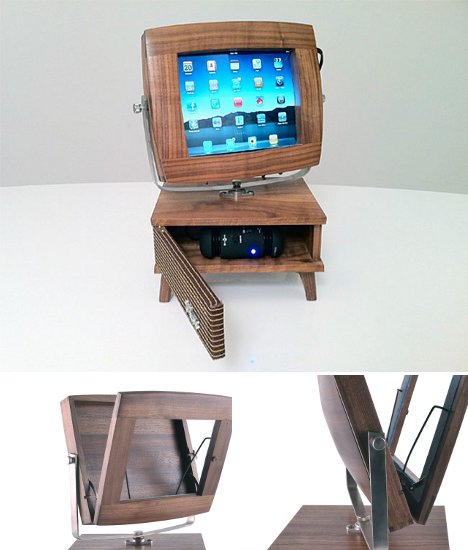 The V-Luxe might just be the pinnacle of TV-like iPad stand design. It features a swiveling, tilting mount for your iPad as well as a speaker cabinet below. The high-quality construction keeps your iPad safe while the very cool retro design makes you feel kind of like you’ve stepped back in time. 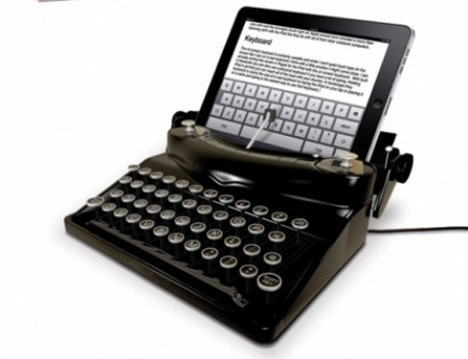 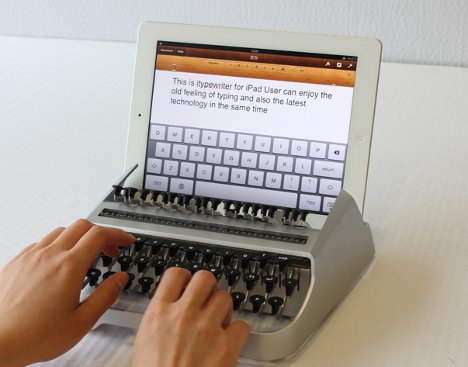 If you do a lot of typing on your iPad, you might be among the legions of users who are frustrated with just how difficult that can be. The virtual keyboard offers no haptic feedback, so touch-typing is just about impossible. Thanks to inventions like the Typescreen from Spinning Hat and the iTypewriter from Austin Yang, the iPad has some typewriter-like mounts that allow users to press actual, physical keys when typing. The typewriter mounts work a lot like classic typewriters, but instead of hammers striking a ribbon they feature rubber-tipped “fingers” that reach up to touch the on-screen keyboard. 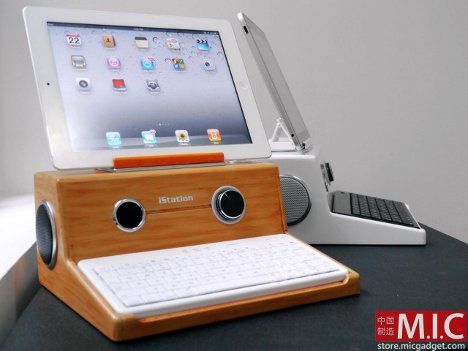 Apple fans who want to go way, way back in time will love the iStation: an iPad dock that turns your tablet into something resembling the early Apple I or Apple II computers. The iStation charges your iPad and provides the perfect place for a wireless keyboard to sit while you type. Inside the sleek wood case is a high-quality stereo system, including a subwoofer. 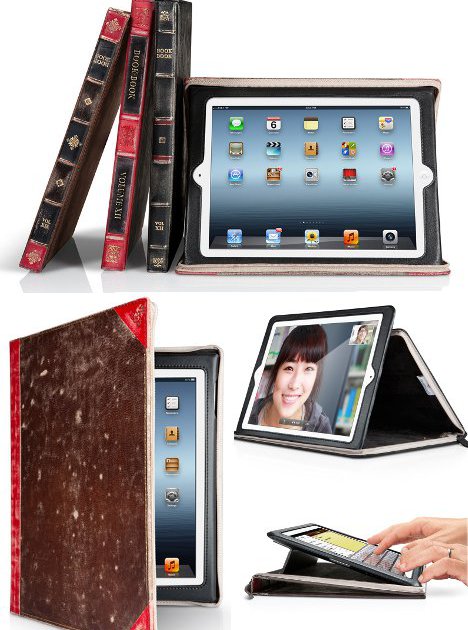 The BookBook case covers up your iPad with a beautiful classic leather book, blending cutting-edge technology with an extremely low-tech aesthetic. The BookBook isn’t all about making your iPad look pretty, however – it protects against damage and can even keep it safe from nefarious iPad thieves by blending right in with the other books on your shelf. 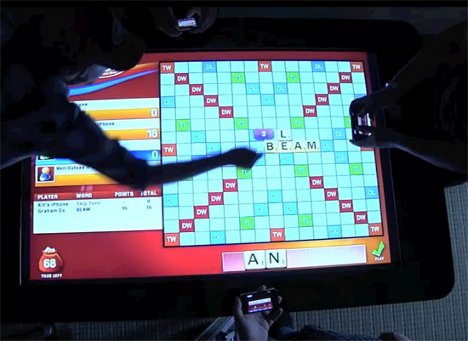 Compared to the iPhone, the iPad’s screen is exceptionally large. But if it still isn’t big enough for you, Crunchy Logistics has you covered. Their Padzilla accessory is basically a touch table iPad dock. You plug your iPad into it and then use an enormous 150-inch display for all of your iPad activities. Why? If you still have to ask that after watching the iPad air hockey video above, then you’re probably not in the Padzilla’s target market. 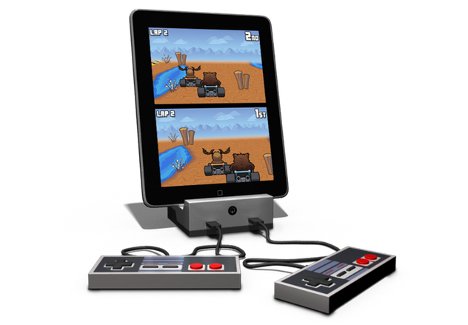 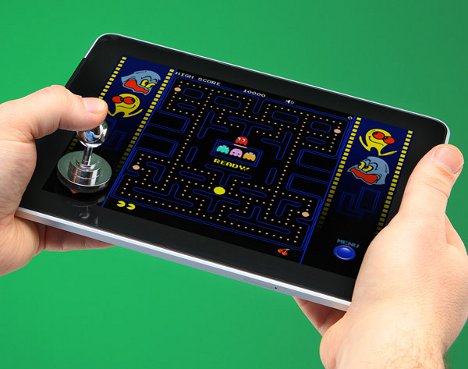 Gaming on an iPad is fun, but lacks the tactile satisfaction of smashing buttons and shoving a joystick around. These two iPad accessories bring that experience to the cutting edge of gadgets by attaching retro-type controllers to the iPad. The GameDock is a small dock that lets you play games through your iPad on a TV screen and with retro-style Nintendo controllers. The Joystick-It sticks (harmlessly and removably, of course) right onto the surface of your iPad, giving you an instant joystick with which to play all of your favorite arcade games.