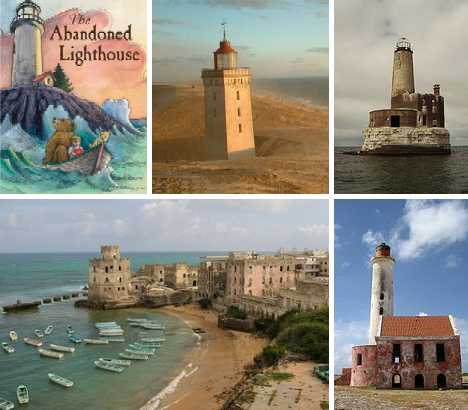 Is a lighthouse still a lighthouse when the light goes out and no one’s left to call it home? These 7 scenic sentinels slowly succumbing to the endless onslaught of wind and waves stand – barely – as solitary reminders of a time when fog-piercing lighthouse beams guided wayward mariners from the cold clutches of the devil and the deep blue sea. 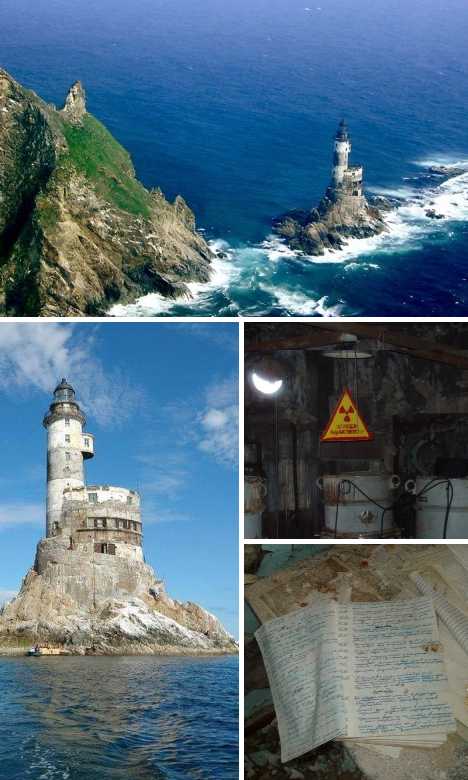 (images via: Flavorwire and English Russia)

Built under extremely difficult conditions on a formerly jagged rock just off the southeastern-most cape of Sakhalin island, the Mys Aniva lighthouse has seen a lot of history over its 3/4 of a century lifespan. Japan ordered the lighthouse built in the late 1930s when Sakhalin was divided between that country and the USSR. Sometime after the Soviets seized the whole of Sakhalin at the end of World War II, they installed an RTG (Radioisotope Thermoelectric Generator) to supply electricity to the lamp – yes, this was a nuclear-powered lighthouse! 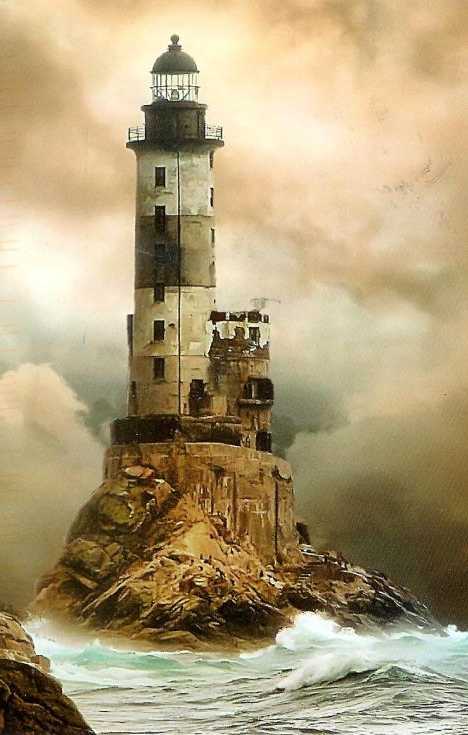 (image via: Remembering Letters and Postcards)

The fall of communism in the early 1990s led to a decade of near-chaos with funds for all purposes in short supply. The Mys Aniva lighthouse, isolated though it was and is, has been looted and ransacked for its metal fittings though luckily its RTGs were removed before the unofficial salvage crews arrived. 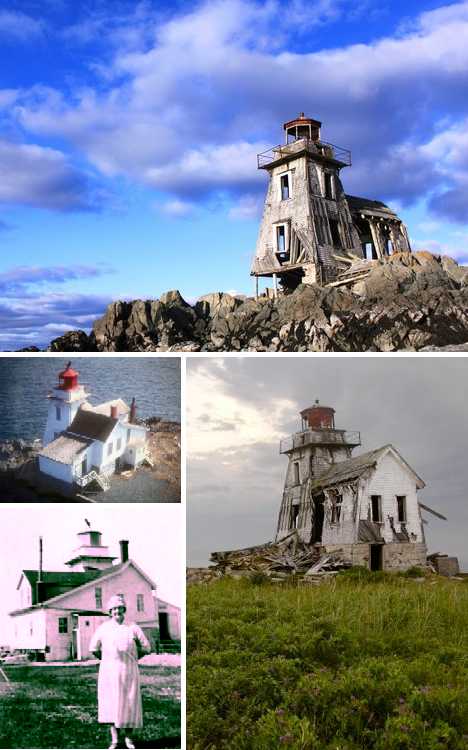 The Grand Harbour Lighthouse and attached keeper’s house at Fish Fluke Point on Ross Island, New Brunswick, Canada has been in a state of slow-motion collapse since 1963 when the station was closed. The once-picturesque lighthouse’s degeneration was accelerated by the great Groundhog Day Gale of 1976 but though it may make an excellent setting for a horror movie the lighthouse itself refuses to implode. 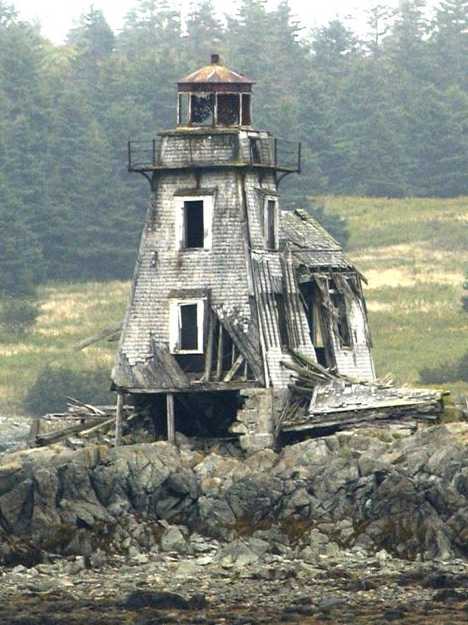 Opened in the fall of 1879, the Grand Harbour Lighthouse was a low-budget affair from the get-go: one of the early keepers was issued a hand-operated foghorn to be used as required. Cheap or not, the wood-framed complex has lasted longer than many stone structures of similar age. At this point it’ll take a superstorm of, say, Sandy-like intensity to finally knock its lights out for good. 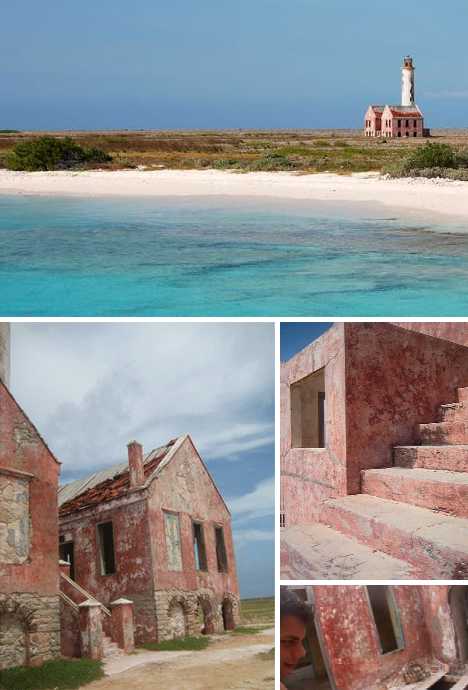 The Caribbean island of Curacao bore witness to the golden age of exploration, pirates, treasure-ships and more – and it’s got plenty of shipwrecks to prove it. In 1850 a lighthouse was constructed on the tiny, (3 km2 or 1.2 square mile) island of Klein Curacao situated 10 kilometers (6.2 miles) south-east of the mother island. 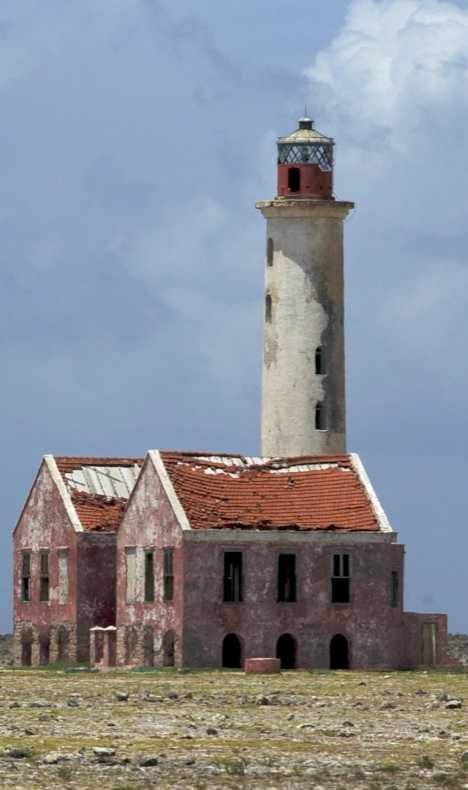 In 1877 a powerful hurricane destroyed the original lighthouse and in 1879 a stronger replacement was built. This lighthouse was subsequently storm-damaged and repaired again in 1913. Though the lighthouse had been abandoned decades ago and had been left to decay, the light itself was recently reactivated and an automatic solar-powered LED beacon was installed. 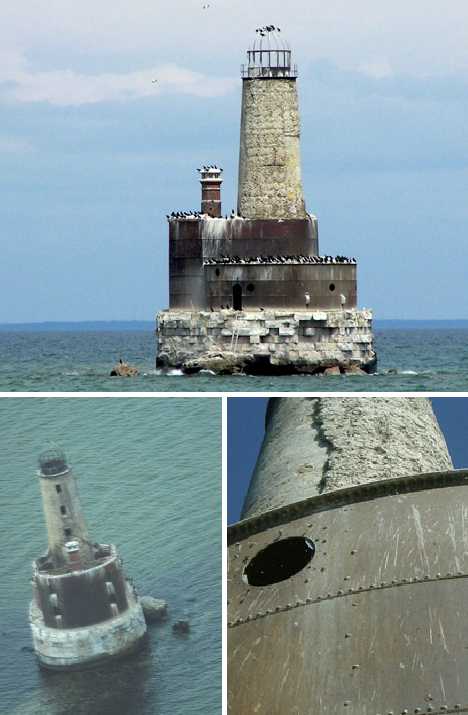 Not all lighthouses stand on the seashore; lakes need lighthouses too! Especially great lakes like, er, the Great Lakes where shipping (and shipwrecks) have been commonplace for several centuries. Take the late, great Waugoshance Light for instance. Built in 1851 to replace a lightship guiding ships through a treacherous area of the Straits of Mackinac, the Waugoshance Light was the first Great Lakes lighthouse to be surrounded on water on all sides. 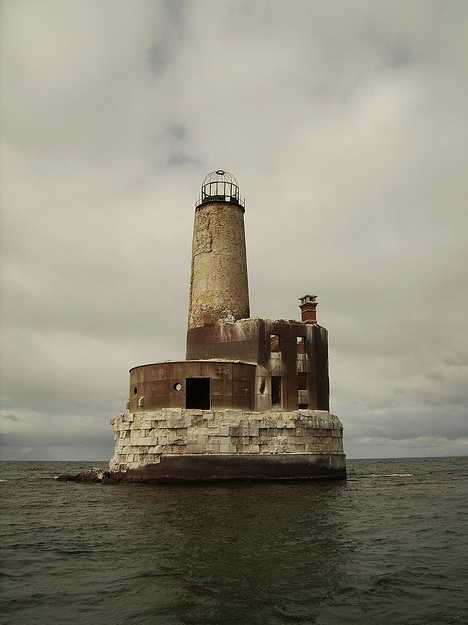 The Waugoshance Light was built of brick and covered with iron plating – built to last, it was. Unfortunately, the creation of deeper draft ships that had to use the Gray’s Reef passage saw the building of the White Shoal Light and the Grays Reef Light. The Waugoshance Light was decommissioned in 1912 and was used as a gunnery target by the U.S. Navy during World War II. That anything still remains of this rugged feat of engineering after more than 160 years is remarkable to say the least. 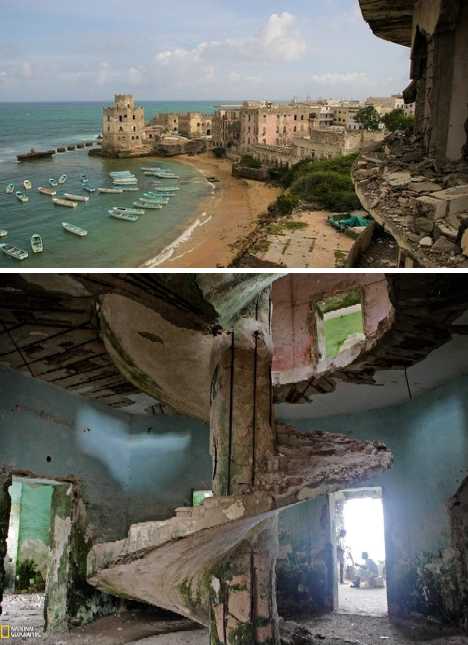 Though shattered by two decades of on & off civil war, the Somali city of Mogadishu has a long and prosperous history based on sea trading. The country’s network of ports appealed to Italian colonizers during the latter quarter of the 19th century and with the establishment of Italian Somaliland extensive infrastructure was built. One of the outstanding and surviving examples is the Mogadishu Lighthouse, or the ruins thereof. 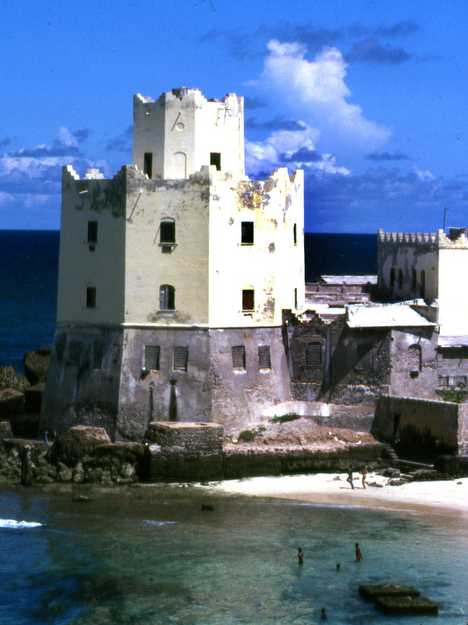 Its light long dimmed and its open spiral staircase on the verge of collapse, the lighthouse serves these days as a shady retreat for fishermen, gamblers and partakers of the aromatic stimulant shrub called qat. 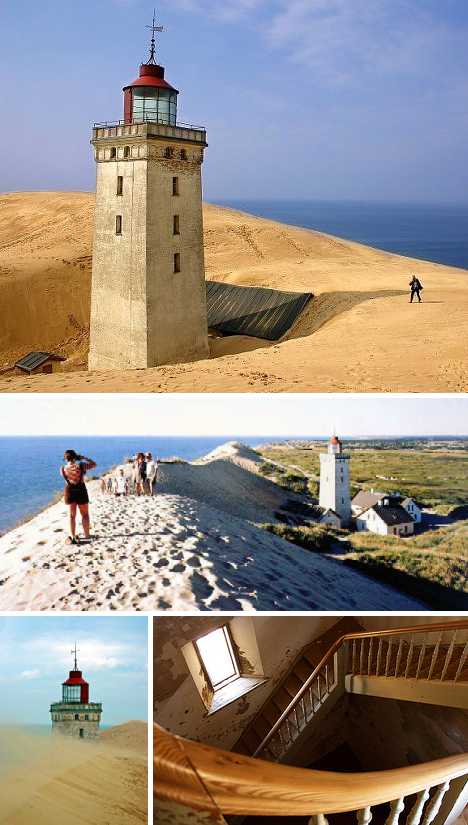 When the Rubjerg Knude Lighthouse in Jutland, Denmark first fired up its lamp on December 27th of 1900, its builders were confident its location atop Lønstrup Klint 60 meters (200ft) above sea level would keep it out of the reach of windblown sand dunes that had made any seaside construction untenable. Though in time the dunes would not be denied, it would take almost 70 years for the lighthouse to be rendered inoperable and a further 35 for all the buildings in the complex to be abandoned altogether. 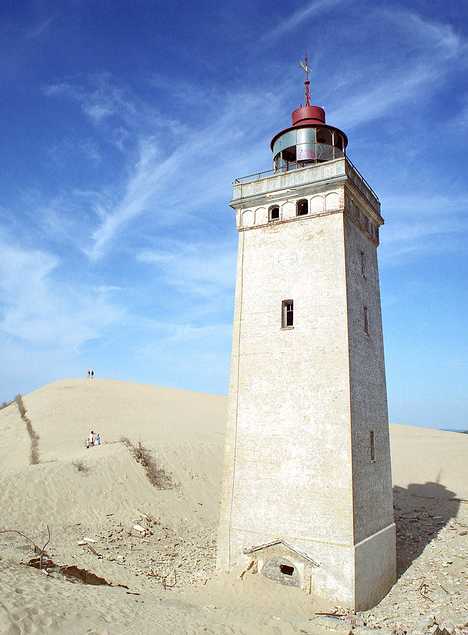 One might think a lighthouse nearly subsumed by sand dunes would be located in the Middle East, North Africa, basically anywhere but Denmark! Live & learn, constant readers and potential lighthouse builders. It’s somewhat ironic a lighthouse constructed to help those who sail the waves would be wrecked by windblown waves of sand. 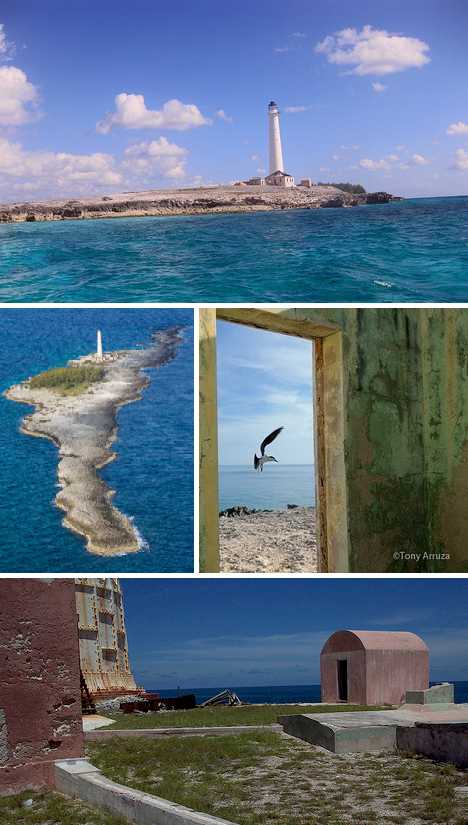 The Great Isaac Cay Lighthouse was built in 1859 on tiny Great Isaac Cay in the Bahamas. The 152ft-tall tower is surrounded by a small group of decrepit and decaying outbuildings abandoned after the lighthouse’s last two keepers mysteriously vanished in 1969. 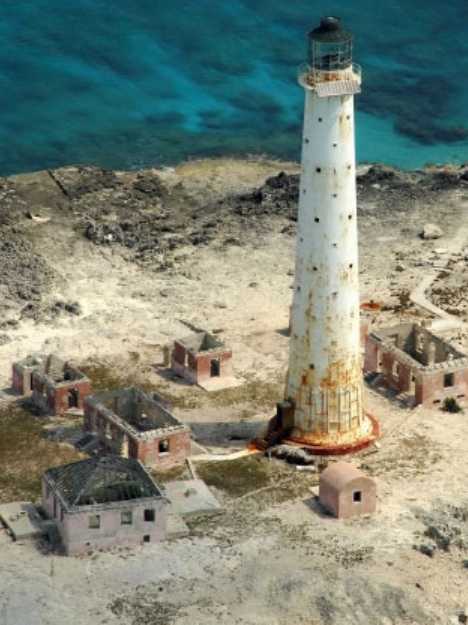 The lighthouse still functions using an automatic lighting mechanism as it is still needed as a navigational aid. That’s just as well – the lighthouse has acquired a reputation for being haunted by the ghosts of shipwrecked ship passengers. It’s said that when the full moon shines, the spectral shades of a mother and child shipwrecked off the island in the late 19th century can be heard bemoaning their fate. 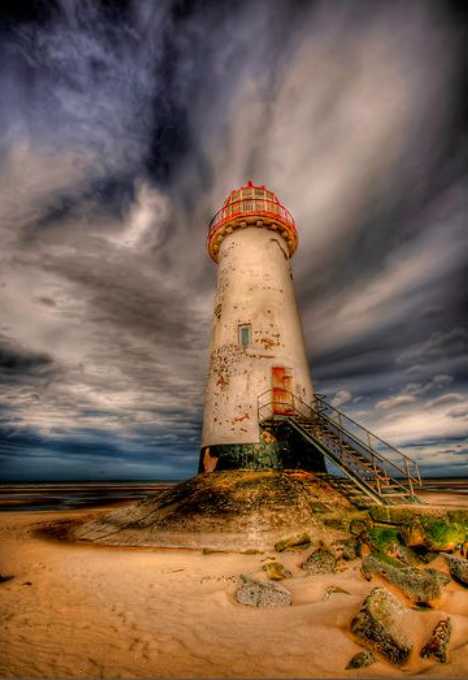 The first to go were the keepers, made redundant by automated power generators. Next were the lighthouses themselves, relegated to superfluousness when GPS navigation offered ship captains accurate positioning any time of day, whatever the weather. Often built in isolated locations beset by the harshest of environments, these relics of a more romantic age are gradually giving up the ghost, ravaged by the same seas they sought to make safer for sailors. Last one to leave, please shut the door and turn out the light.