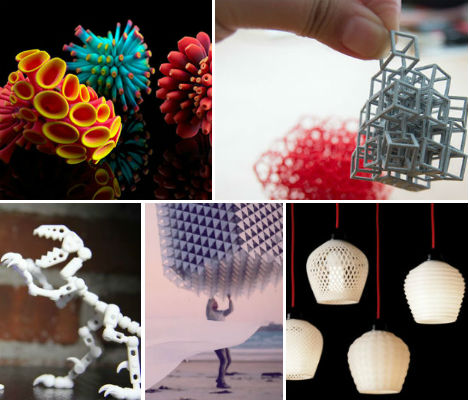 The world of desktop 3D printing has made factory-style fabrication possibilities available to artists and designers, who turn digital models into three-dimensional solid objects with successive layers of plastic or metal. Virtual computer-created blueprints are sliced into digital cross-sections for the machine, which lays down layers of liquid, powder or sheet material. Here are 14 fun examples of what people are coming up with, from practical objects like lamps and jar lids to toys and sculpture.

Nervous System by Data is Nature 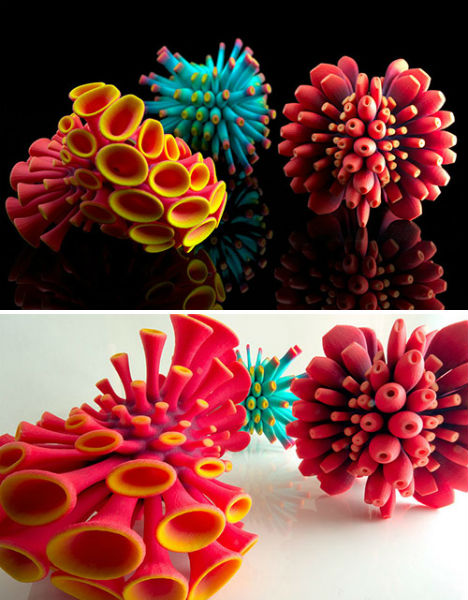 Designer Jessica Rosenkrantz of Nervous System created these 3D-printed forms resembling sea anemone, coral and barnacles, in neon shades of pink, blue, yellow and orange. ‘Each execution of the program, a new random double curved NURBS surface is created for the barnacles to grow on. Colours range from yellow to pink based on generation of the barnacle, yellow barnacles randomly subdivide into pinker and pinker ones. The pores will also be open to different degrees between the different executions of the program.’ 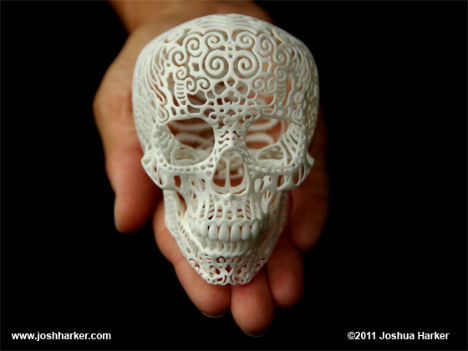 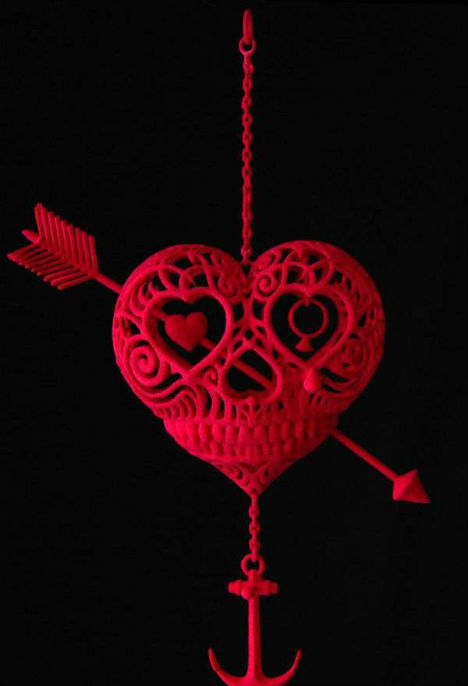 Artist Josh Harker is known for intricate lacework skulls as well as realistic portraits and figures, and forensic art, all created using computer software and 3D printing technology. Harker holds the #1 and #4 most-funded sculpture projects in the history of crowdfunding site Kickstarter. “My intent is to explore and give form to the architecture of the imagination. By disengaging the conscious mind I am able to examine esoteric visions before they submit to a recognizable metaphor. I am then able to capture and refine them into the forms I command offering the opportunity to study their identity and structure.” 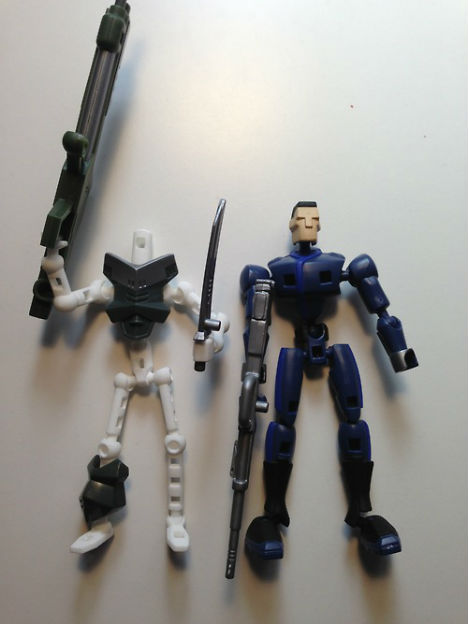 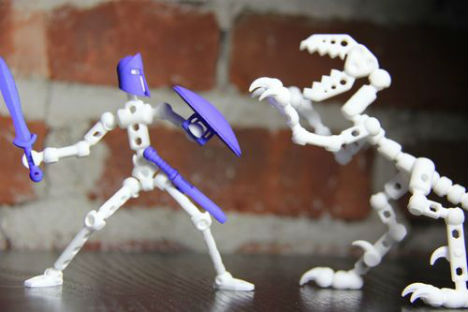 “Welcome to the future of toys,” say Go, Go Dynamo, the creators of the ModiBot, who provide plans for 3D printed toys like dinosaurs, knights and ninjas. “ModiBots are a creative framework for creating poseable characters, but it’s meant to be built upon like a skeleton,” toy designer Wayne Losey told Wired of the snap-to-build system. “We also want to put the ability to create ‘content’ into a user’s hands. ModiBot is ultimately a tool for that.” 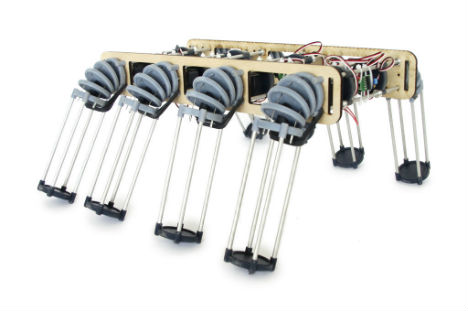 These biologically-inspired robotic structures by Randy Sarafan attempt to blur the lines between artificial and organic creatures, made of rigid and flexible materials that mimic the properties of joints and musculature. 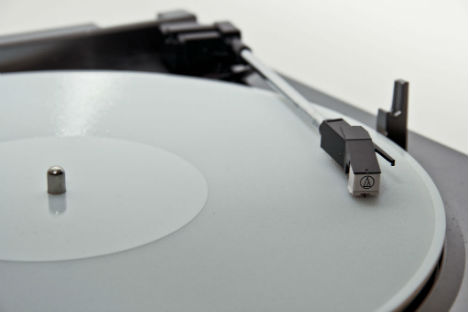 Turn your digital music file into physical records using a technique developed by Amanda Ghassei. “I printed these records on a UV-cured resin printer called the Objet Connex500.  Like most 3D printers, the Objet creates an object by depositing material layer by layer until the final form is achieved.  This printer has incredibly high resolution: 600dpi in the x and y axes and 16 microns in the z axis, some of the highest resolution possible with 3D printing at the moment. “ 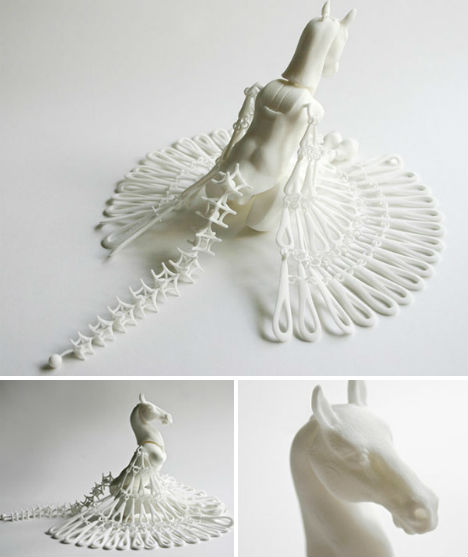 All components of this incredible working horse marionette by artist Michaella Janse van Vuuren were 3D-printed. “The image of the horse itself was inspired by a drawing that I made during this time. The Horse Marionette has fully functional joints and movable wings. All the horse’s parts have been placed in the same digital file so no assembly is required afterwards. When strung up the horse comes to life.” 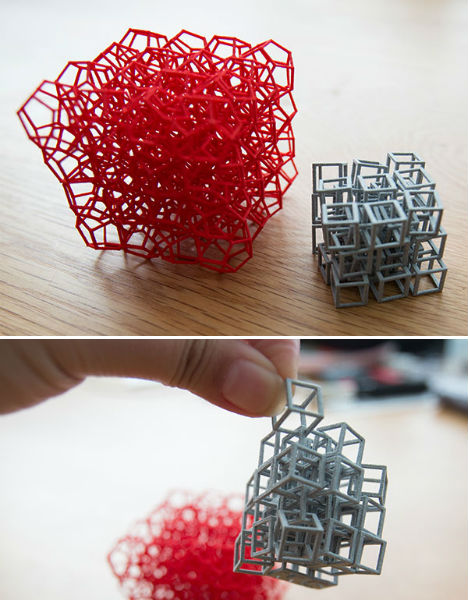 Tiny interlocking shapes make up larger shapes that you can manipulate (very carefully!) with your hands. The Dod’net is a network of 64 dodecahedra with edges just 1 millimeter thick. You can order these shapes and more at Shapeways.