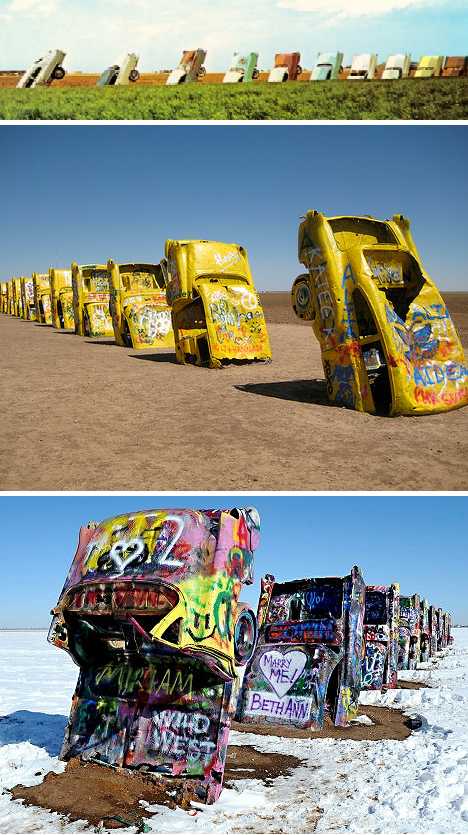 Like Seattle’s Gum Wall, the Cadillac Ranch outside Amarillo, Texas, is a semi-interactive artwork that evolves over time, in this case under the weight of accumulated graffiti deposited by passing visitors. 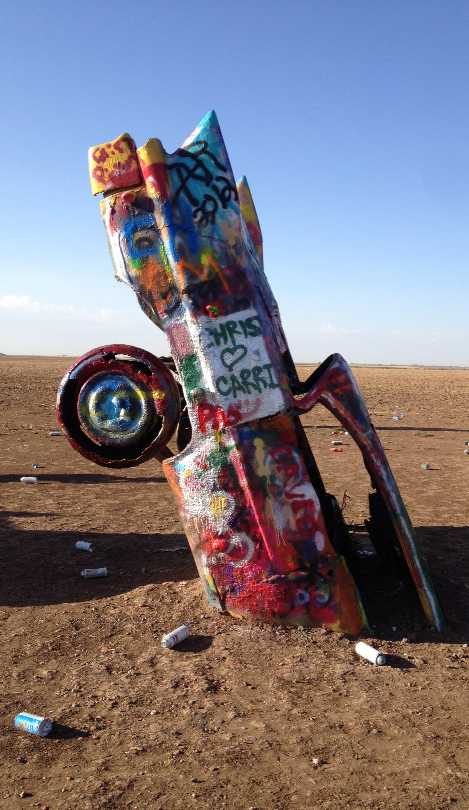 Conceived by art collective Ant Farm and completed in 1974, Cadillac Ranch consists of 10 actual Cadillac cars buried nose-first in the fertile Texas soil. Graphically charting the rise and fall of the iconic Caddy Tailfin, the cars were arranged in the order of their year of their manufacture: 1949 through 1963. As Ant Farm expected and even encouraged, the cars proved to be graffiti magnets on a grand scale. 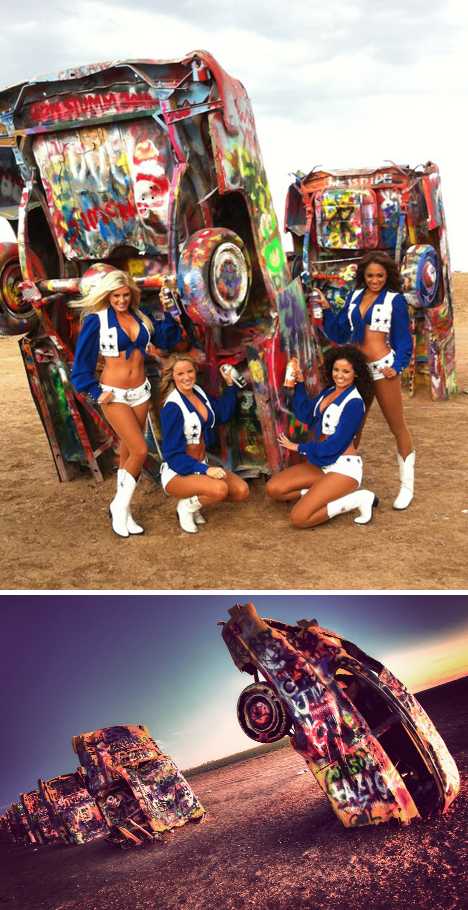 The cars are completely painted over from time to time so as to provide clean slates for the next generation of visiting graffiti artists. At various points all 10 cars were painted white, yellow, pink (in conjunction with a 2005 Breast Cancer fundraiser), red, sky blue, and matte black – the latter in 2003 as a tribute to the sudden passing of Ant Farm member Doug Michels. 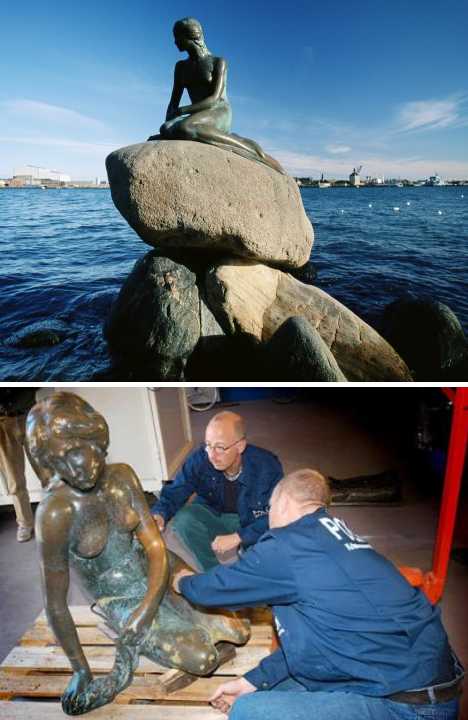 (images via: Rough Guides, China Daily and The VG Press)

Commissioned in 1909 and unveiled in 1913, The Little Mermaid in Copenhagen, Denmark is one of the world’s most well known and most defaced statues. You might think she looks pretty good for a centenarian but since 1964 the bronze figure has had its head stolen several times, its right arm sawed off, and in 2003 unknown perpetrators employed explosives to blast the figure off its rock base. 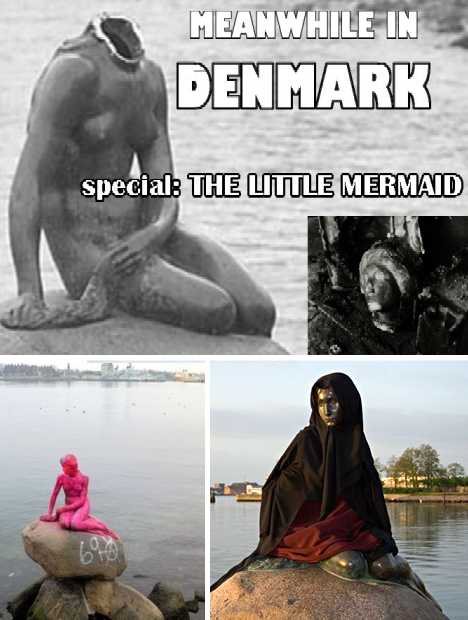 (images via: The VG Press, Xinhuanet and Puppies and Flowers)

The Little Mermaid statue has also been painted – in whole and in part – many times over the years and it has also been clothed, twice in burqas. In 2006, city authorities announced they were considering a plan to move the statue further offshore in an effort to discourage the more brazen vandals but concerns were raised that such action might only encourage more vandalism. To date, The Little Mermaid remains prettily perched in her original location on the shore of Copenhagen harbor. 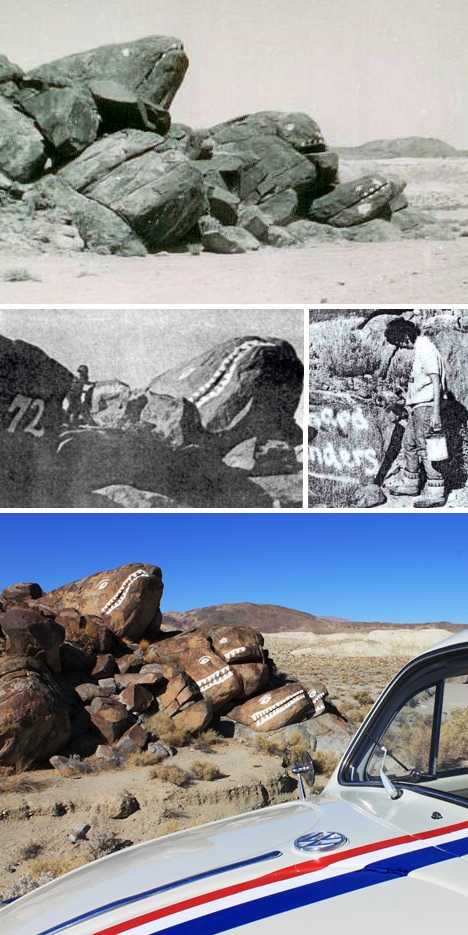 (images via: Trona On The Web, High Desert Memories and Die-Luftverkuehlten)

The Fish Rocks (or Whale Heads) are located in ominously-named Poison Canyon a few miles from dry and desolate Trona, California. Though the rocks making up the formation eroded to their present rounded appearance over many millennia, it took the imagination of a local Tronian – plus some white paint – to enhance their decidedly maritime aspects. The original artist didn’t sign his work but clues point to one or more members of the Fox family doing the deed around the time of the Second World War. 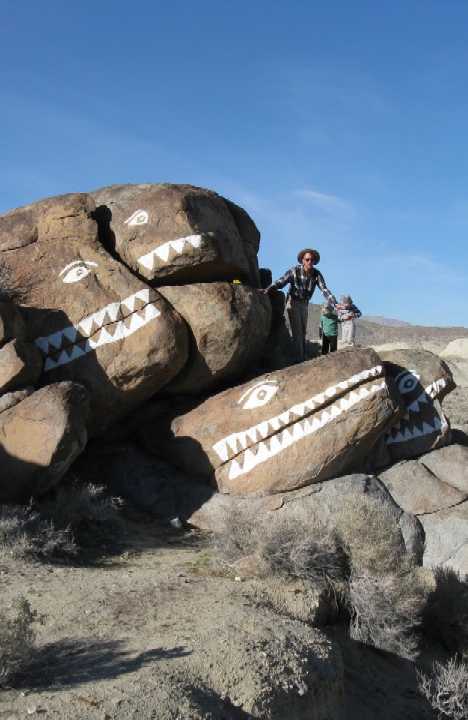 (image via: Welcome To Ridgecrest)

The Federal government’s BLM was never comfortable with the decorated state of the Fish Rocks and in the early 1970s a team of Boy Scouts was sent to paint over the rocks with brown paint. This didn’t sit well with members of the community, and it wasn’t long before the eyes and teeth reappeared along with a host of less appealing graffiti. In 1972, several youths who confessed to the “crime” were offered a deal by local authorities: if they removed the extraneous graffiti, other markings relevant to the Fish Rocks’ fishiness could stay. The deal was sealed and the Fish Rocks have enjoyed their semi-official status ever since.