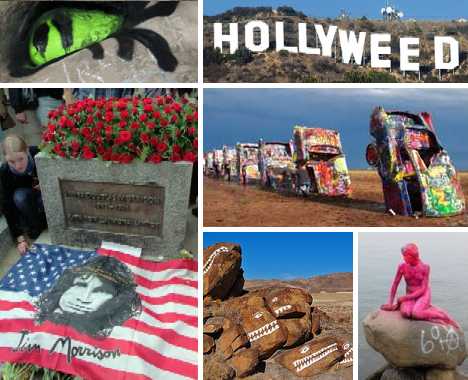 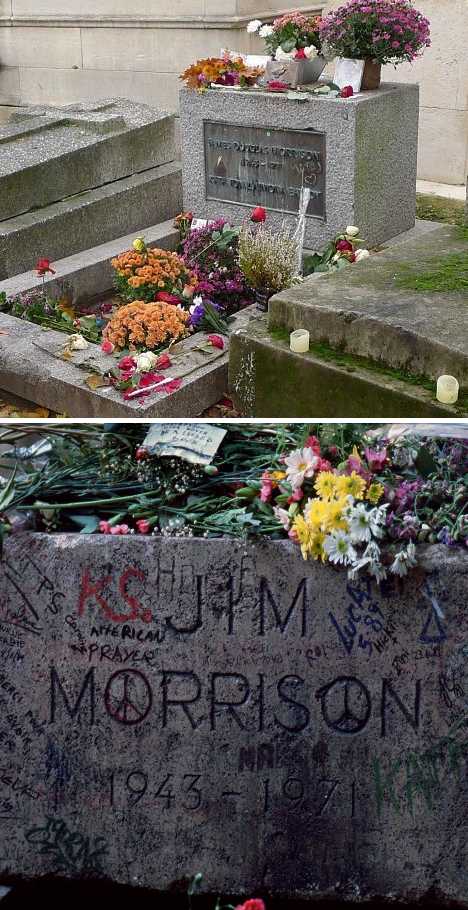 One of the founding member’s of rock music’s “27 club“, Jim Morrison of The Doors was buried in Père Lachaise Cemetery in Paris after his untimely death due to a drug overdose on July 3rd, 1971. 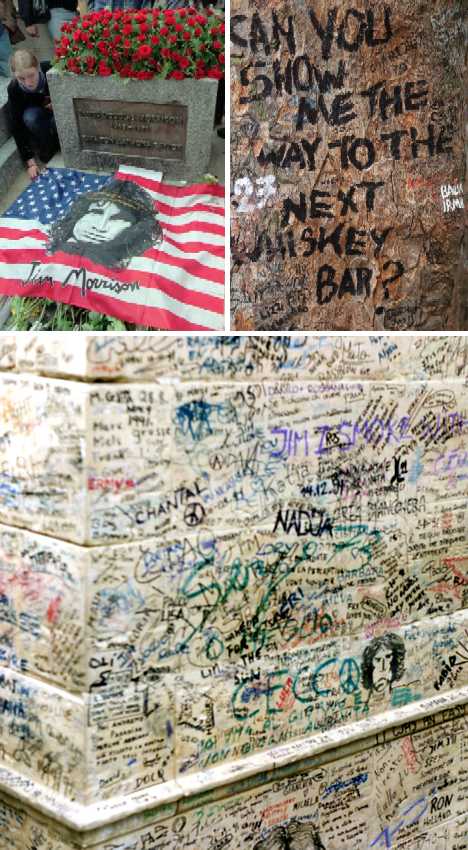 (images via: David Estrada, Paris On Demand and Jim Morrison: The Lizard King)

The gravesite, though unmarked until 1973, rapidly became a place of pilgrimage for Morrison’s fans who left flowers, letters and mementos on the grave. They also left an abundance of graffiti – at first on Morrison’s grave but spreading to adjoining graves, trees and cemetery infrastructure due to the sheer volume of visitors over the years. 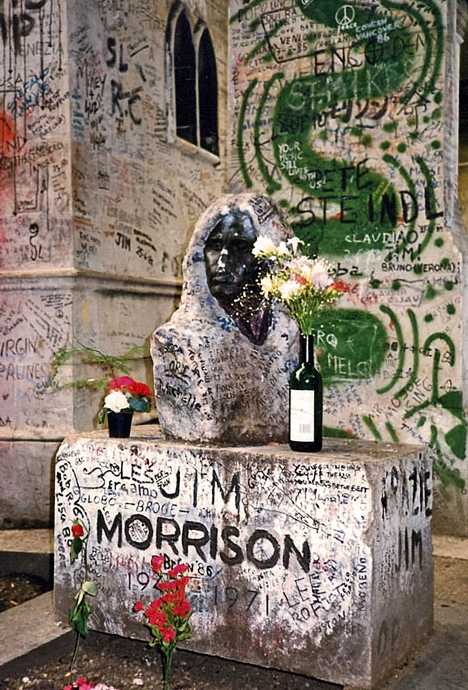 One of the iconic symbols of Jim Morrison’s gravesite was a plaster bust of Morrison sculpted by Croatian artist Mladen Mikulin. In 1981 the bust, along with a new gravestone engraved with Morrison’s name, was added to the grave to mark the 10th anniversary of Morrison’s death. As with any other solid infrastructure at or near the actual grave, the the bust was extensively decorated (some prefer the term “defaced”) in colorful graffiti until 1988, when it was stolen. Kudos to Kevin KL of Winnipeg, Manitoba, Canada who snapped, processed and posted the remarkable image above showing Jim Morrison’s grave as it was in 1987.

Seattle’s Gum Wall rose from the humblest of beginnings: theater patrons annoyed by having to wait in long lineups began sticking their worn-out chewing gum on the nearest wall. What began as simple, messy vandalism evolved into a bonafide artwork, especially after 1999 when theater attendants gave up scraping away the gum. It’s one of the few art exhibits where vandalism is, if not exactly encouraged, required to maintain the piece’s status. 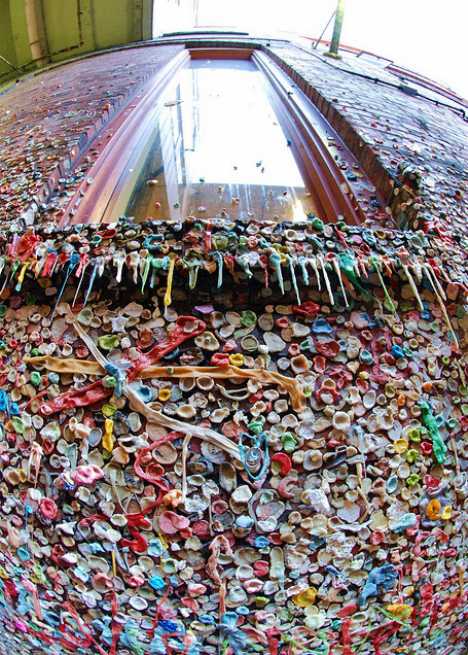 Located in Post Alley under the Park Place Market, the Seattle Gum Wall continues to grow as the theater remains popular enough to cause long lineups outside. As for the gum-chewing patrons, they can hardly complain about the sickly sweet aroma of gum cooking away in the summer sun, though they might want to hold their breath while they wait: Trip Advisor ranks the Gum Wall as the second-germiest tourist attraction on Earth, just after Ireland’s Blarney Stone. A tip of the hat to Flickr user photosbyjerry for the vertigo-inducing image above. 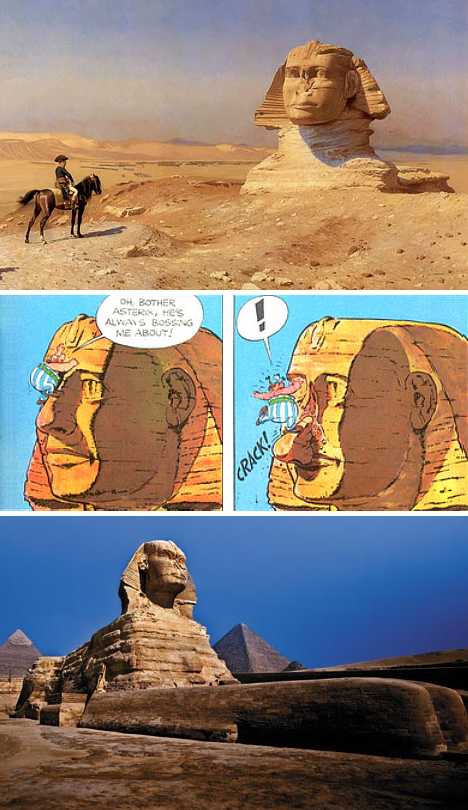 (images via: Sacred Sites, Above Top Secret and Smithsonian)

The Great Sphinx of Giza is one of the world’s oldest monuments, and as such is also one of the most mutilated by vandalism and marred by graffiti. Legend has it the Sphinx’s notably missing nose was shot off by a French cannon during Napoleon’s 1798 invasion of Egypt but this is not the case; sketches made decades before clearly show the noseless aspect of the ancient statue. 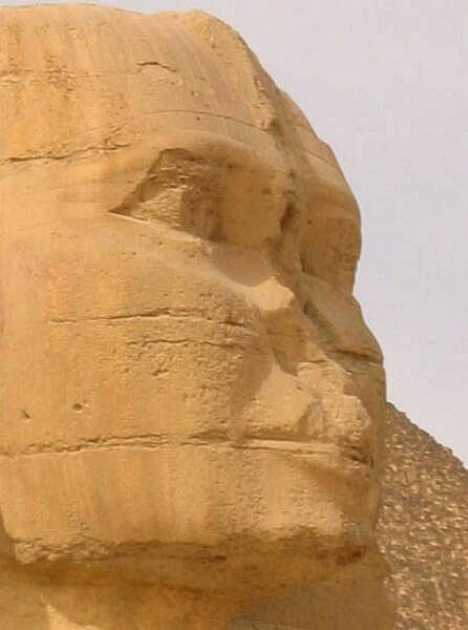 The actual act of vandalism occurred in AD 1378 when Muhammad Sa’im al-Dahr, an iconoclastic Sufi Muslim, chiseled off the nose after noticing that area farmers worshiped the monument in hopes of reaping a good harvest. For his troubles, al-Dahr was lynched by the angry locals.