(images via: Fremont.com and Fremont Universe)

Returning to Seattle, the Pacific coast city’s quirky Fremont neighborhood is home to the Fremont Troll, a gargantuan gargoyle made of rebar and ferroconcrete who’s haunted the dim recesses beneath the Aurora Bridge since 1990. Wearing a grim grin and clutching an unlucky VW Beetle in one hand, the Fremont Troll glares at intruders from his gleaming hubcap eye. 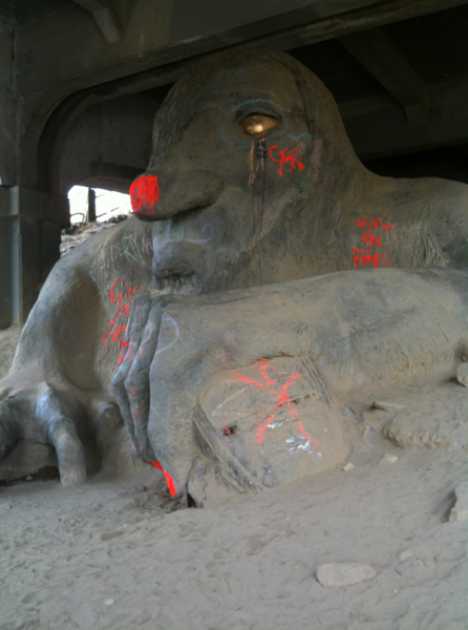 (images via: ParisFrance.US, Anna In Wanderland and Subculture and stuff)

The mortal remains of approximately six million Parisians fill a series of ossuaries that form the famed Catacombs of Paris. Owing to the dim lighting and the difficulty of monitoring what goes on in the extensive network of passages carved into the limestone beneath the City of Light, graffiti of an often macabre nature complements the artfully arranged bones exhumed from Paris’ medieval urban graveyards. 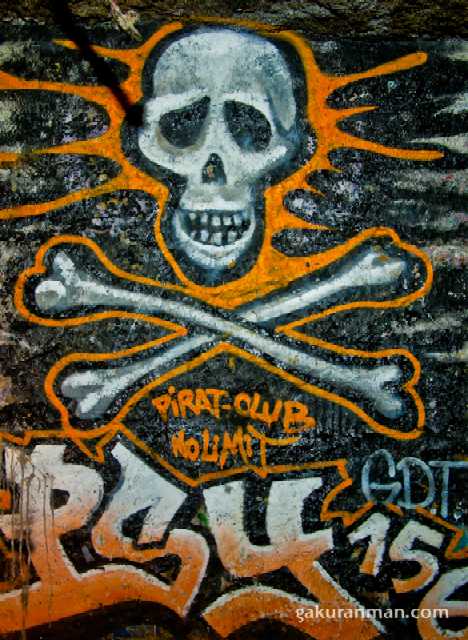 Graffiti is one thing, vandalism is quite the other. In September of 2009, the public portions of the Paris Catacombs were temporarily closed to the public after a weekend incidence of vandalism. According to an AP report, “bones and skulls scattered along the walking paths” were deemed to be a hazard to the estimated 250,000 visitors who traverse the hand hewn underground passageways annually. Sacre bleu!

The world-famous HOLLYWOOD sign situated on the southern slopes of Mount Lee in the Hollywood Hills area of the Santa Monica Mountains was erected in 1923 but the “HOLLYWOOD” part dates from 1949 – before that, “HOLLYWOODLAND” advertised a new housing development. Having set the precedent for a name change, others would take it upon themselves to make adjustments to the sign according to their own agendas. 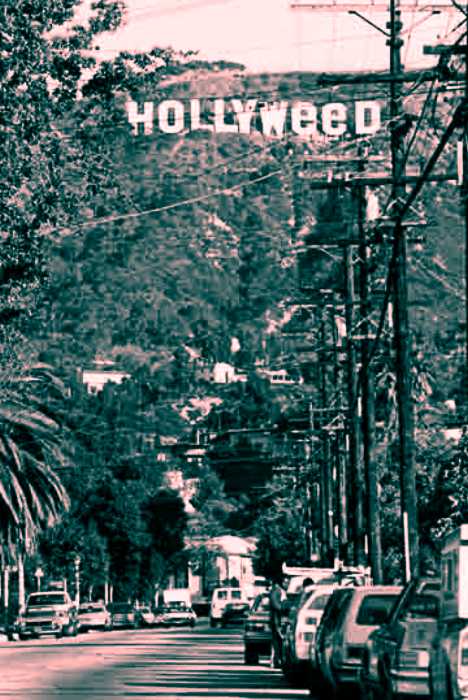 The HOLLYWOOD sign-modifier-in-chief has to be the late Danny Finegood, an area resident who grew up virtually in the shadow of the iconic cultural monument. With a little help from his prankster friends, Finegood changed the lettering of the sign a number of times with the highlight (with the emphasis on “high”) occurring on January 1st of 1976. Finegood & Co. hung customized curtains over the sign’s latter two letter O’s to form “HOLLYWeeD”, in celebration of the state of California’s implementation of more relaxed marijuana laws. Having achieved success and presumably confident in his technique, Finegood went on to create HOLYWOOD (Easter 1977), OLLYWOOD (during the Iran-Contra Hearings) and OIL WAR in the early 1990s.