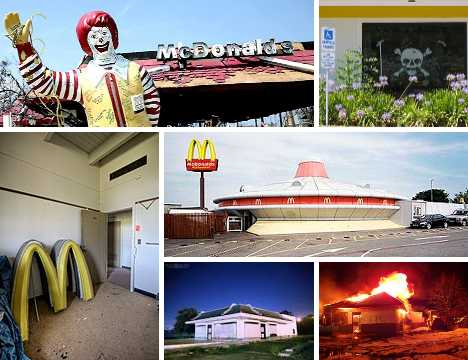 I’m leavin’ it! You can bet your sesame seed buns these 10 closed and abandoned McDonald’s have swirled their last McFlurry and will bag burgers no more. 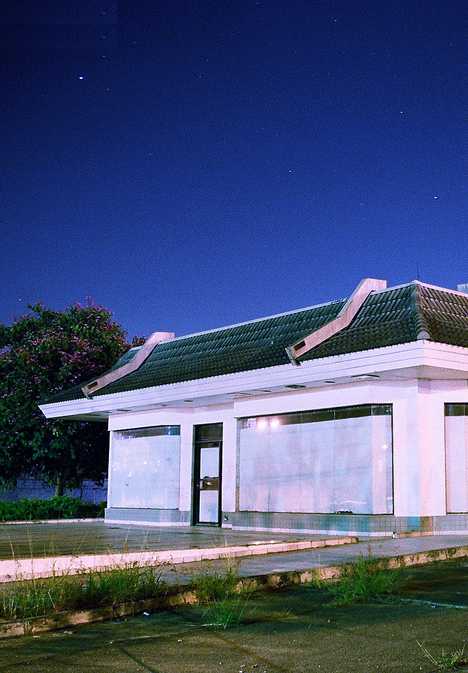 The usual knock against modern architecture (or should we say, “ARCH-itecture”) is that it lacks character, and the stereotypical mansard-roofed “McStore” style of McDonald’s outlets is the poster child for the genre. With that said, Flickr user Flavio Grana has managed to coax a supersized amount of depth out of the anonymous abandoned McDonald’s location above. Stripped of all brand identity yet instantly recognizable, the moonlit McD’s stands alone in silent glory, a washed-out monument to conspicuous consumer culture.

If you thought the UFO-shaped McDonald’s in Roswell, NM was out of this world, then feast your eyes on the former McDonald’s restaurant in Alconbury, UK. First opened in 1990 as The Megatron, the distinctive saucer-shaped eatery was an interplanetary flop: in 1993 it closed but soon re-opened under the McDonald’s banner.

After roughly 15 years serving up burgers, fries & shakes to hungry Huntingdonshire locals, the location shut down for good and (oddly for a closed McDonald’s franchise) remained shuttered for a further half-decade before finally being demolished in mid-2008. Plans are now afoot to allow six “gypsy pitches” to occupy the land where the McUFO once stood. Tramps and thieves are advised to look elsewhere. 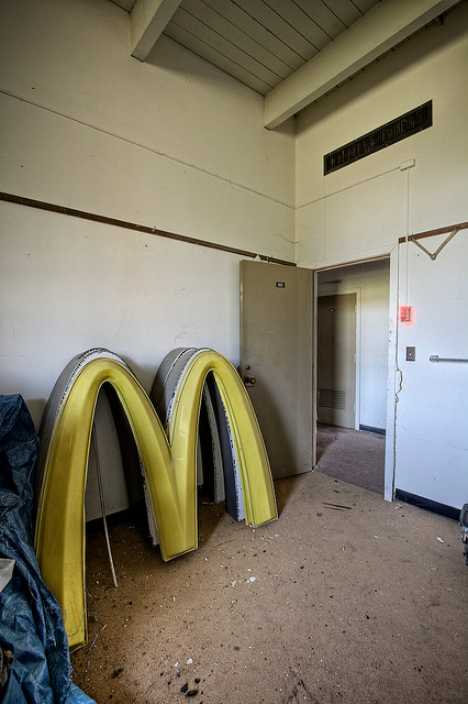 It’s not often an item (with emphasis on the “em”) this large and obtrusive escapes the watchful eyes of the McBrand Police but it seems to have happened here. Flickr user rustyjaw doesn’t explain what the Big M is doing inside an abandoned naval communications station or what plans (if any) he has for this piece of fast food M-orabilia, and that’s probably in his own best interest. Imagine refurbishing and re-electrifying the signage, then mounting it on your dining room wall… awesome to be sure, though it would definitely ruin the mood during intimate gourmet dinners. 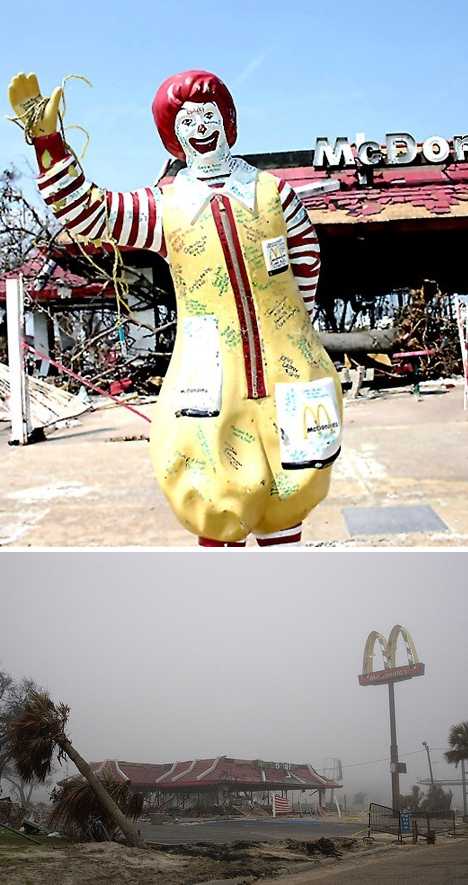 (images via: Imgur/1RgbS and Joel Carranza))

If Ronald McDonald wasn’t creepy enough already, check out his zombie clown alter-ego, still (barely) standing in Biloxi, MS, shortly after Hurricane Katrina devastated the area in September 2005. It took a while for reconstruction to get into full swing around Biloxi and the neighboring gulf coast but it was too late for both this shattered & shuttered McDonald’s and the tilted Ronald – they’ve been replaced by a Wendy’s.