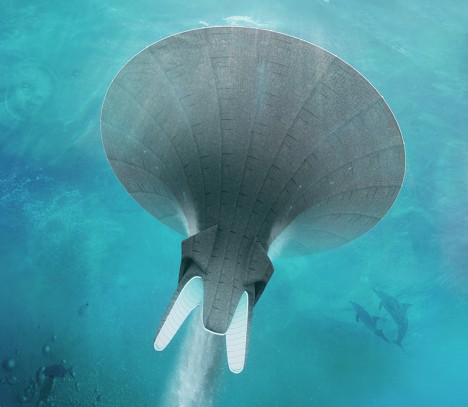 The Seawer is a garbage-collecting seascraper designed gather trash as it passes through the world’s oceans. “Globally, millions of tons of trash enter the ocean each year. Due to ocean currents, this plastic waste collects in particular areas of our global ocean … prevailing ocean currents have created a large mass of tiny particles of plastics, which have resulted in a “plastic soup” commonly referred as the Great Pacific Garbage Patch (GPGP). GPGP is twice the size of Texas and contains six times more plastic than plankton biomass. As plastic does not biodegrade, it poses a threat to thousands of marine animals.” 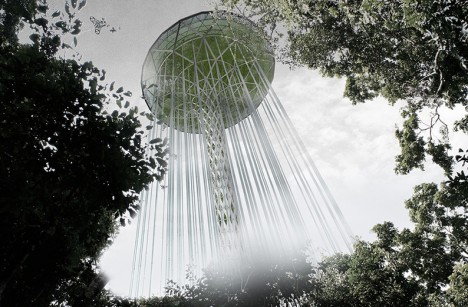 The Rainforest Guardian skyscraper features water tower, forest fire station, weather station, and scientific research and education laboratories, all set in the sky above of the Amazon. One core function of the structure is to gather water during the rainy season to be deployed when the area is dry. “The lotus-shaped water tower is capable of capturing rainwater directly. The collected water is filtered and stored in spare reservoirs. Using capillarity combined with active energy, the aerial roots with a distinct sponge-structure can absorb and store the excess water without disturbing the Amazon’s ecosystem. In the case of fire, firefighters fly to the scene and extinguish the fire with the collected water. In addition, the Guardian Skyscraper provides special scientific research laboratories for scientists to monitor the climate change and the ecosystem stability.” 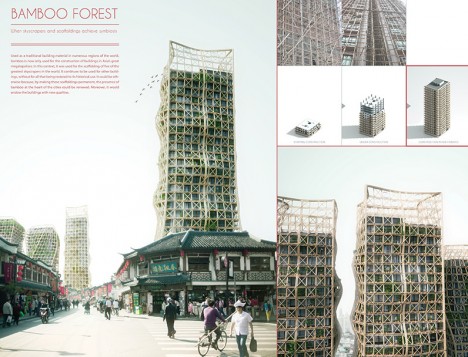 Bamboo Forest recognizes the essential role bamboo scaffolding plays in the construction of skyscrapers in many places around the world, including tall towers in China, but proposes building these support pieces directly into the finished products they bolster. These can in turn be used to support the growth of green facades and the suspension of shading systems, becoming an integral part of a building’s ecosystem. The resulting symbiosis renders the need to remove scaffolding redundant and adds organic character to traditionally-rectilinear finished urban architecture.