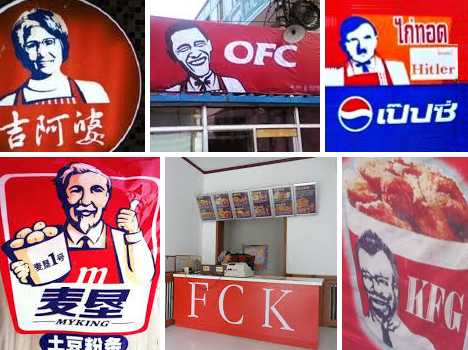 Acquiring a KFC franchise doesn’t appear to be that difficult. Appearances may deceive, however, as do these dozen absolutely unauthorized KFC wannabes.

OFC: Change We Can’t Believe In

Tea Party types might have stuck with KFC (Kenya Fried Chicken) but the Chinese student-entrepreneurs behind OFC were less concerned with birth certificates, not to mention other legalities. Located near Beijing Aerospace City College, OFC sought to trump a mere Kentucky Colonel by evoking the head honcho, the Commander in Chief, the Big O himself. Speaking of legal issues, it seems KFC won a small victory by forcing the shop to change its name to UFO. Yeah, that really helped.

From one president to another, it’s a coop d’etat! Kennedy Fried Chicken was founded in 1975 by Afghan immigrant Taeb Zia, who named his restaurant after JFK “because Afghans are fond of the former president.” The first store opened in New York City’s Flatbush neighborhood and these days most of the roughly 1,000 outlets are owned by Afghan-Americans. Kennedy Fried Chicken‘s unusually loose control over its franchisees has occasionally brought the chain into conflict with KFC, usually when the owners paint their stores with red & white paint and employ “KFC” on their signage.

Located in Haiyuan, north-central China’s Ningxia province, FCK “Tea and Hamburger” means no offense in their ongoing effort to serve Fried Chicken Kentucky-style, along with tea and hamburgers (also presumably Kentucky-style). Full props to English teacher Alison Lentz for discovering the joy of FCK and photo-documenting its graffiti-scarred existence on her blog. 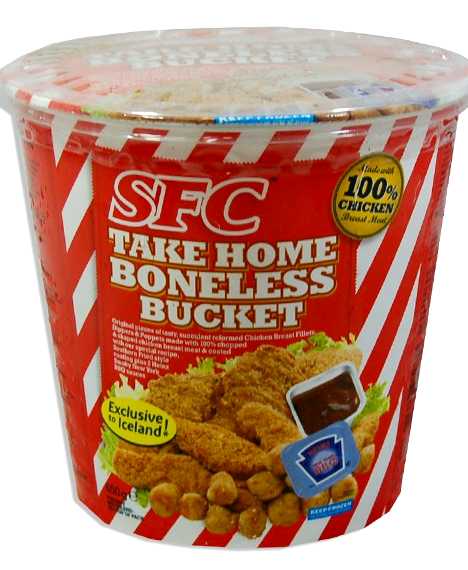 “I gave my love a bucket, that had no bones…” There ain’t nowhere you can hide when a peeved Colonel’s on your tail, and that includes Iceland (the nation or the British supermarket). SFC‘s Take Home Boneless Bucket above doesn’t display a Viking-ized version of Harlan Sanders, which is unfortunate, because that would be awesome! It does allude to KFC via the branding copy, however, offering buyers “Original pieces of Tasty reformed Succulent Crispy Chicken… coated with a Southern Fried style coating made to Our Secret Recipe of Herbs & Spices”. Tasty reformed chicken, huh? Sounds scrumptious.