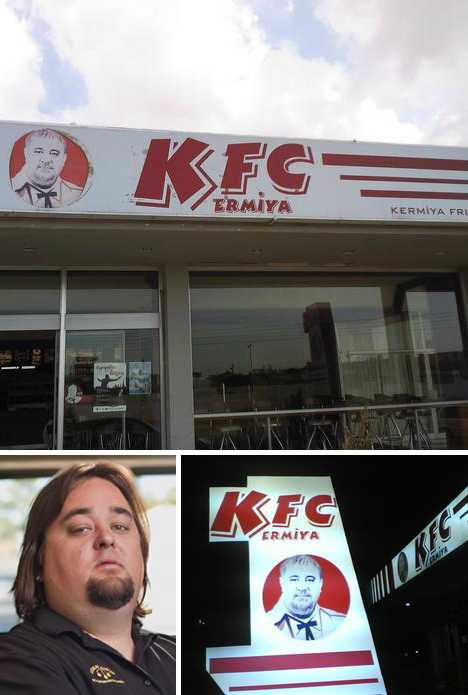 Kermiya Fried Chicken is one of the more blatant KFC copycats but as they’re located in the Turkish Republic of Northern Cyprus, a pseudo-state recognized only by Turkey, they’re pretty much free to copy whoever, whatever and wherever they want. We’re not sure just who, what or where “Kermiya” is (and don’t ask Vladimir Putin, he’s got enough on his plate); presumably that’s the guy on the sign who looks disturbingly like Chumlee from Pawn Stars on his way to a Klan rally.

(images via: The Buz Fairy, Q8 All In One and EA WorldView)

“The name of our restaurant is KFC, but we’re not an American brand. We’re not an American company… Iranian KFC — and not American — has been inaugurated.” Thanks for clearing that up, Amir Hossein Alizadeh, we wouldn’t want to confuse a restaurant serving Kentucky-fried chicken with anything American. Perish the thought, blasphemer! The Iranian businessman was quoted in early 2012 as he prepared to open the first of many personalized (or Persianalized) KFC’s planned for the Islamic Republic of Iran.

(images via: Littleoslo In Broken English, NDTV and Hangtianxiezhen)

This Chinese KFC-wannabe opened in 2007 and the public seems to have a soft spot for the “long-lost sister” of KFC’s Colonel Sanders. How sweet! Now it turns out the name of the chain is “Ji’a’po”, which translates to “Sweaty Granny”, a derogatory term used by uncouth Chinese men to curse women. Naturally, KFC was less than pleased with the name and the obvious brand infringement so they took their case to China’s State Administration for Industry & Commerce. Naturally, the SAIC told KFC they had no basis for a case and (quite possibly) called their rep a Ji’a’po on her way out.

We Got… Steam Heat! 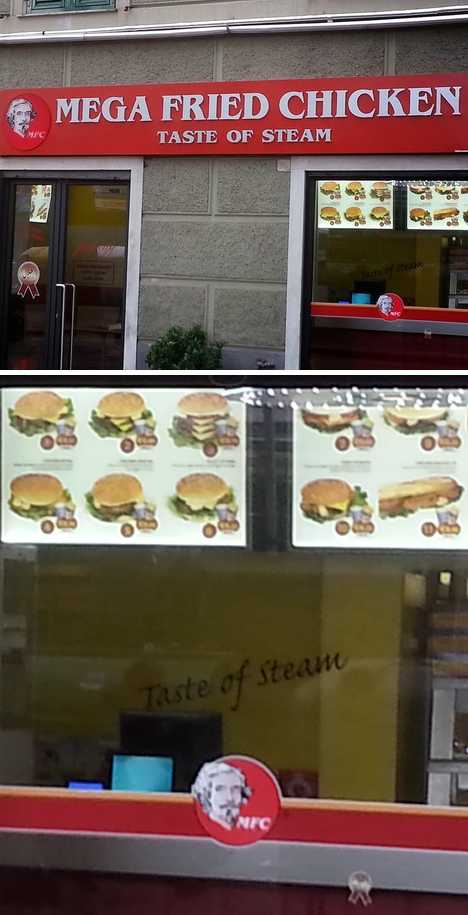 “Taste Of Steam”, hmm… well, what exactly does steam taste like? Considering the temperature of steam is above water’s boiling point and the human body is about 3/4 water, this is one mystery this writer’s in no hurry to solve. As far as MFC (Mega Fried Chicken) goes, give ’em credit at least for their seriously Shakespearean mascot. Or maybe it’s General Custer, which makes sense since a general trumps a colonel any day of the week.