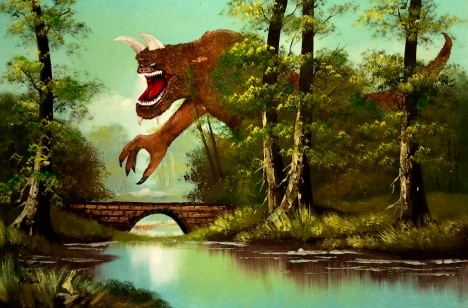 “I believe I found this one at a Goodwill,” explains Chris McMahon about 2010’s The Forest Monster. The original painting evokes the steamy languor of a primeval wetland lacking only a giant Meganeura dragonfly or two. It does have an arched stone bridge and a horned grinning monster, which is nice.

The Thing By The Boats 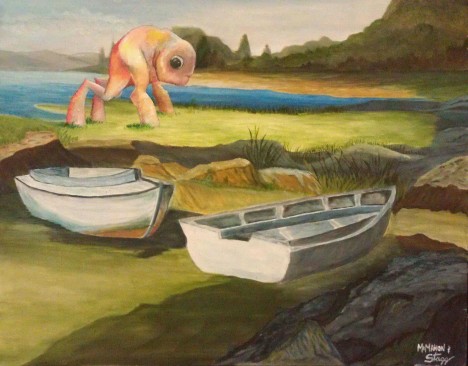 It’s obvious the original version of what McMahon has named “The Thing By The Boats” wasn’t anything to call home about so any purists out there mourning its modification don’t have much of a case. Being a “thrift shop special”, little of value was lost when McMahon gave the piece some personality and judging from the artist’s online popularity, the painting’s stock may have risen far higher than even the original painter could have imagined. 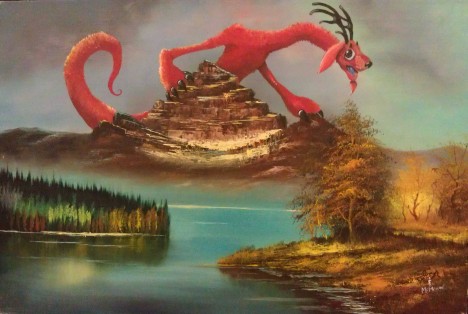 Ho ho horrors! Evidently McMahon had so much trouble coming up with a title for the above Involuntary Collaboration, he gave up and left it “Untitled“. One can feel for where McMahon’s coming from… most creatures conjured up by our subconscious minds and expressed in our worst nightmares are nameless as well. Thanks to Chris McMahon, however, what he has seen now cannot be unseen… by the rest of us.