Shipping container shelters combine the appeal of ultimate portability with rugged durability, but these structures add another dimension lacking in the default configuration: three times as much space thanks to their transforming designs. Below are four examples with varying degrees of technological sophistication for a wide range of applications.

The RDSS (Rapid Deployment Shelter System) shown above can be deployed by one person in less than two minutes, expanding into a 400-square-foot, rigid-walled shelter – all from a single 20-foot ISO (International Standards Organization) shipping container module. 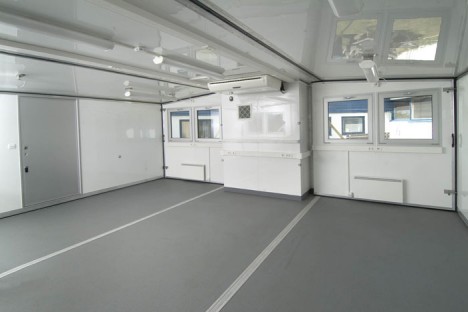 While the same company offers a variety of similarly convertible solutions, the particular model in the video comes equipped with on-board heating and air conditioning systems and its own generator. The units can be sent by ship or rail, towed by trucks or flown by helicopters and stacked nine containers high.

Three-in-one cargo modules are made by a variety of manufacturers for deployment under various conditions, including military use, communications headquarters, medical triage, disaster relief centers, homes or offices – the one above is from Mobile Shelter Systems.

A soft-walled variant on the same theme of spatial expansion, the above patent-pending design unfolds two side panels that become floors with curved ceilings arcing overhead. A lower-tech approach, to be sure, but also one that could theoretically be done for much less money and in a do-it-yourself fashion for those inclined to create their own shipping container building. 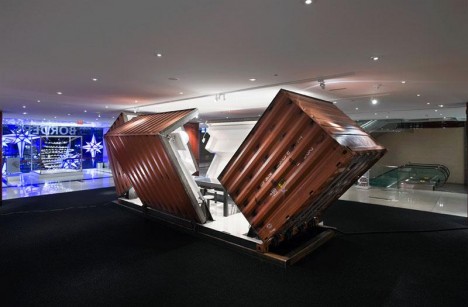 While less suited for rugged outdoor use, any discussion of convertible shipping container spaces should include a mention of the Illy Push-Button House (which has both commercial and residential applications) designed by Adam Kalkin, the sides of which fold down to form an open-air living room area or temporary storefront space.