Transforming unused sections of the London Underground,  this bold proposal envisions a network of subterranean paths for pedestrians and cyclists as well as spaces for pop-up shops, cafes and cultural events. These would be situated in stretches of tunnel and subterranean stations currently sitting idle and empty, a waste of space in (or under) one of the most densely-populated cities on the planet.

In the spirit of New York’s proposed Low Line, the plan involves putting disused subway infrastructure to work serving as primary areas for circulation and interaction. To connect these disparate spaces, the design calls for old reservoir chambers and exchanges to bridge these larger and more open sections of the Underground system. 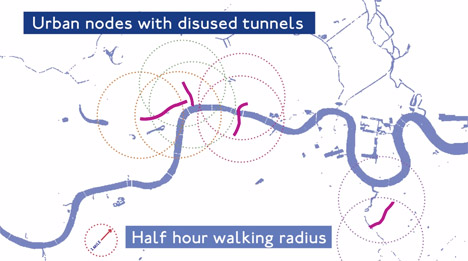 Architects at Gensler, the firm behind the idea, developed this proposal to address a series of issues in this space-starved capital of England, including bicyclist fatalities on surface streets, a lack of pedestrian public space and the general ease of movement across the city. The development process could also be incremental, moving in stages to make transition and restoration costs more manageable and to test usage patterns, adapting and evolving strategies as the project unfolds. 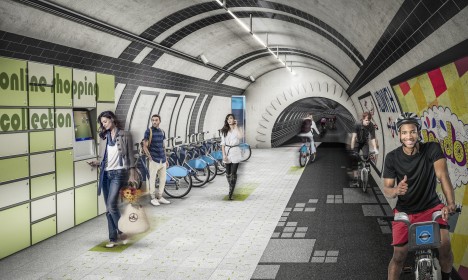 As a bonus, special panels lining the interior of these underground spaces would be used to generate kinetic energy from people passing through and walking on surfaces, obviating the need for external power sources. Indeed, the technology for this system already exists, and this would be a great potential application for both cost and sustainability reasons. 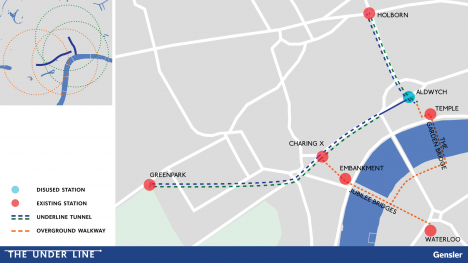 The default plan is to start with voids between Green Park and Holborn, working stations that could provide access to unused portions of the Tube spanning them. In turn, tying these spaces into the existing Underground network would make them more accessible to visitors coming into the city and locals alike. 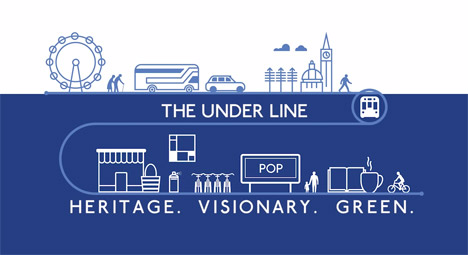 Unlike other conceptual projects for London, like the SkyCycle,or serious proposals, like the Garden Bridge, very little would have to be added or displaced for this reprogramming approach to work. The Under Line may also borrow a bit of inspiration from this clever idea to transform Paris Metro stops into event spaces.