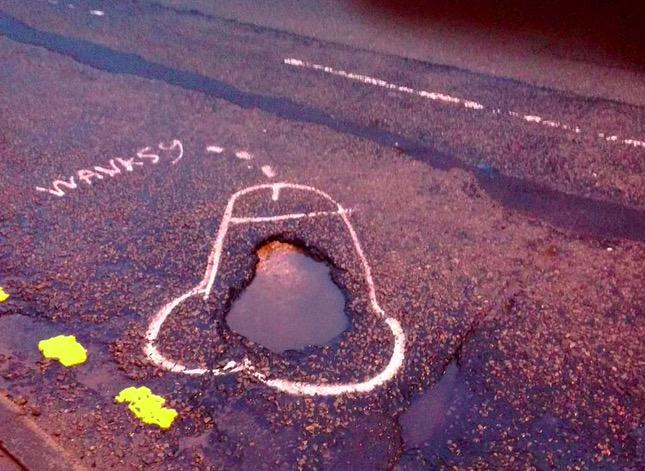 In a quest to evoke a faster fix from city authorities, a lone street artist going by the name Wanksy is highlighting holes in the ground with (NSFW) spray paintings sharing one thing in common: the rough but instantly recognizable shape of a phallus. 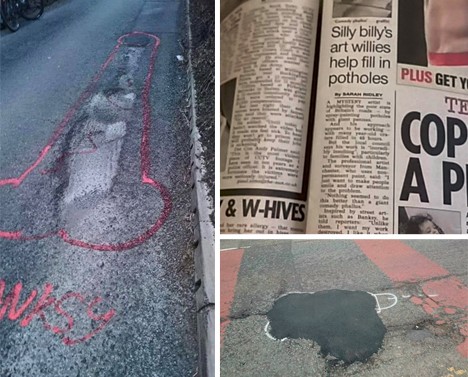 Like Hanksy, Wanksy is a play on Banksy, a world-renowned art activist. Found all around Manchester, England, Wanksy’s penis-shaped pothole sketches are perhaps crude but they serve more than one point. First, they provoke public calls to officials to clean them up while also filling in the holes. Second, but equally important for the safety of the artist, the phallus represents an easy-to-draw figure that can be sketched quickly with less risk of getting hit bye a vehicle. Third, the rough markings serve as interim warnings to drivers who might not see a water-filled hole at night.

Though the paint washes away over time, making these temporary, this response from a local council member shows that the powers that be are not particularly amused: “Has this person, for just one second, considered how families with young children must feel when they are confronted with these obscene symbols as they walk to school? Not only is this vandalism, but it’s also counter-productive. Every penny that we have to spend cleaning off this graffiti is a penny less that we have to spend on actually repairing the potholes.” 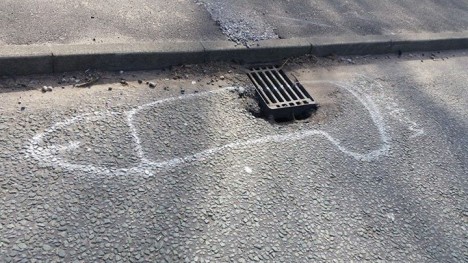 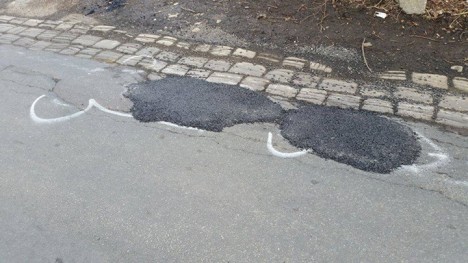 The notion of highlighting or filling in potholes by activists takes many forms beyond this novel approach, including a Chicago tile artist who fills in holes with mosaics, a guerrilla gardener who plants pansies in these street voids and even a pothole robin hood who steals asphalt from the city to fill in gaps with his own work and time. In the grand scheme, one could argue that this newest contributor is somewhat juvenile, but if it solves a real-world urban infrastructure problem, it is hard not to smile at least a little at his attempt to lighten the mood while fixing city streets.