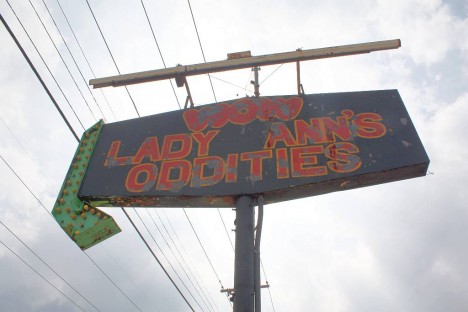 It would seem this vintage sign is all that remains of LADY ANN’S ODDITIES, a long-gone lingerie shop in Oklahoma City, OK. “It was a very cool place,” relates Flickr user Brian Smith (Darkmoon Photography), “like a lingerie store meets a head shop meets a museum of the bizarre.” Smith snapped the sign-without-a-store on May 7th of 2009 while the photo of the shop dates from May of 1981. 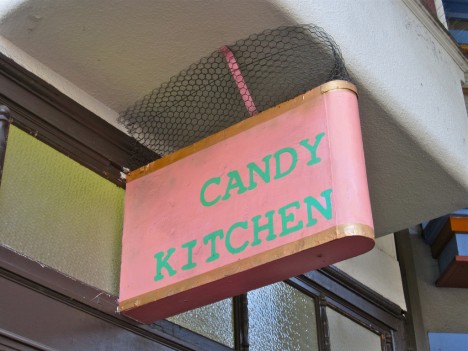 You’ll find what’s left of the abandoned Candy Kitchen lingerie shop at 2807 24th Street in San Francisco, California, with the image of the store sign above dating from October 9th of 2011. According to Flickr user Robby Virus, “First it was a candy store, then a lingerie store, and now it’s closed.” Veni vidi vici. 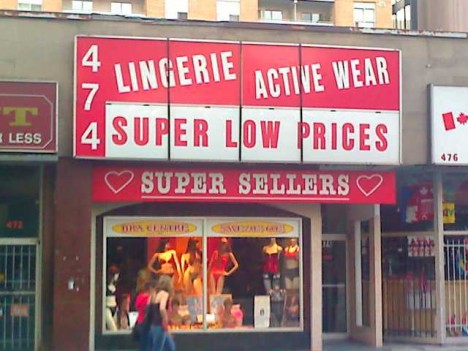 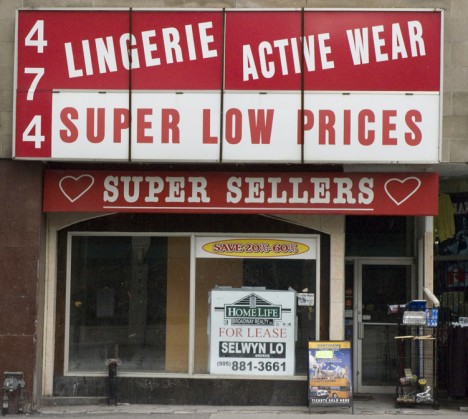 Just what was this Toronto, Canada lingerie shop’s name, anyway? Also, if lingerie isn’t active wear, what is it – INactive wear? PROactive wear? Not that any of this matters since even SUPER LOW PRICES couldn’t keep the downtown store from sinking into a lake of red ink. Flickr users PaulInDaMix and Kevin McBride (Mr Kevino) snapped the closed, abandoned and for sale ex-lingerie shop in August 2007 and February 2010, respectively. 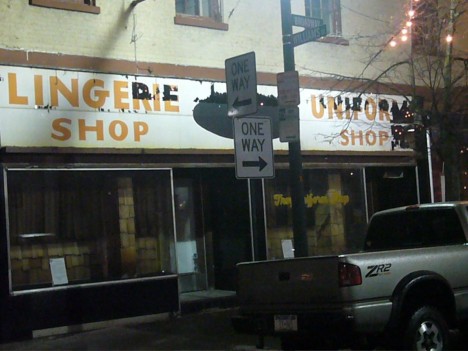 How generic can you get? One can only imagine what designer labels this uber-sketchy Troy, NY lingerie (and uniform) shop once stocked – as if granny panties boast designer labels. Flickr user Amanda McDonald Crowley ventured way out of her comfort zone when she snapped the shop’s deteriorating facade on December 10th, 2007. 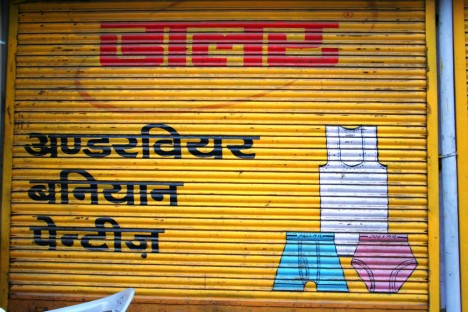 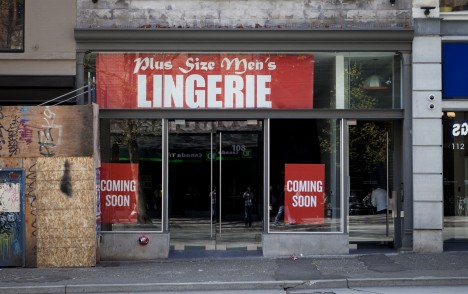 If it weren’t for the COMING SOON signs in the window, one would naturally assume Plus Size Men’s LINGERIE had closed because, er, reasons. Don’t panic yet, however, it would seem the distressing downtown Vancouver signage actually portends the forthcoming opening of The Noodle Box, a southeast asian eatery whose owners display a rather piquant sense of humor. We’re sure you’re all quite relieved – all except certain discriminating plus-sized men who’ve been seeking lingerie that would properly cover their girth. Not that there’s anything wrong with that.