No room at the inn? No kidding – the denizens of these strange nativity scenes would get even the kindest innkeeper flipping the switch on the No Vacancy sign. 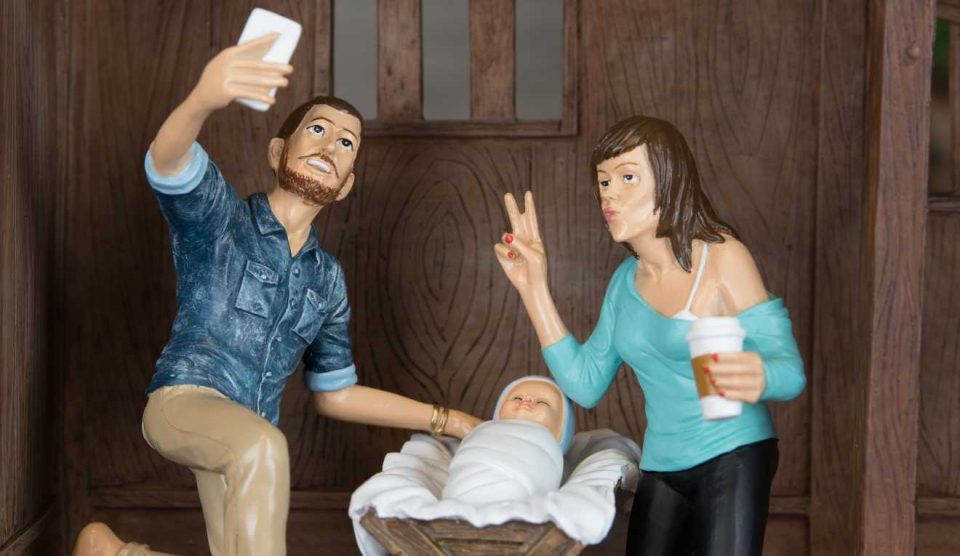 The Modern Nativity Hipster Nativity Set throws tradition out the window and recasts the original nativity in a modern mold. “We started joking about how religions would be different if their sacred texts were set in modern times,” explains creator Casey Wright, who whipped up the concept while enjoying a few beers with his buddies. How hipster-ish is The Modern Hipster Nativity Set? Well, Joseph sports a man-bun and wears a denim shirt while he takes a selfie with Mary, who’s holding a coffee from a certain popular java purveyor as she puckers up with her best duck-face. 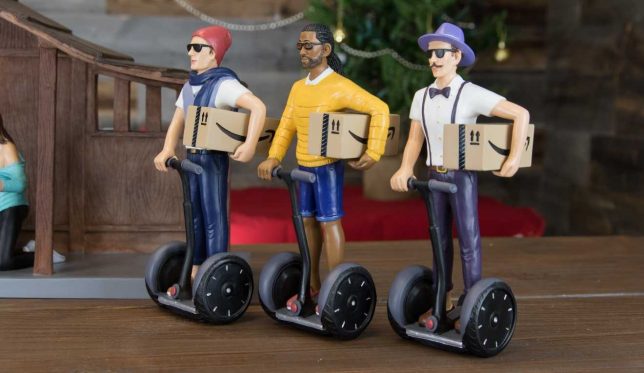 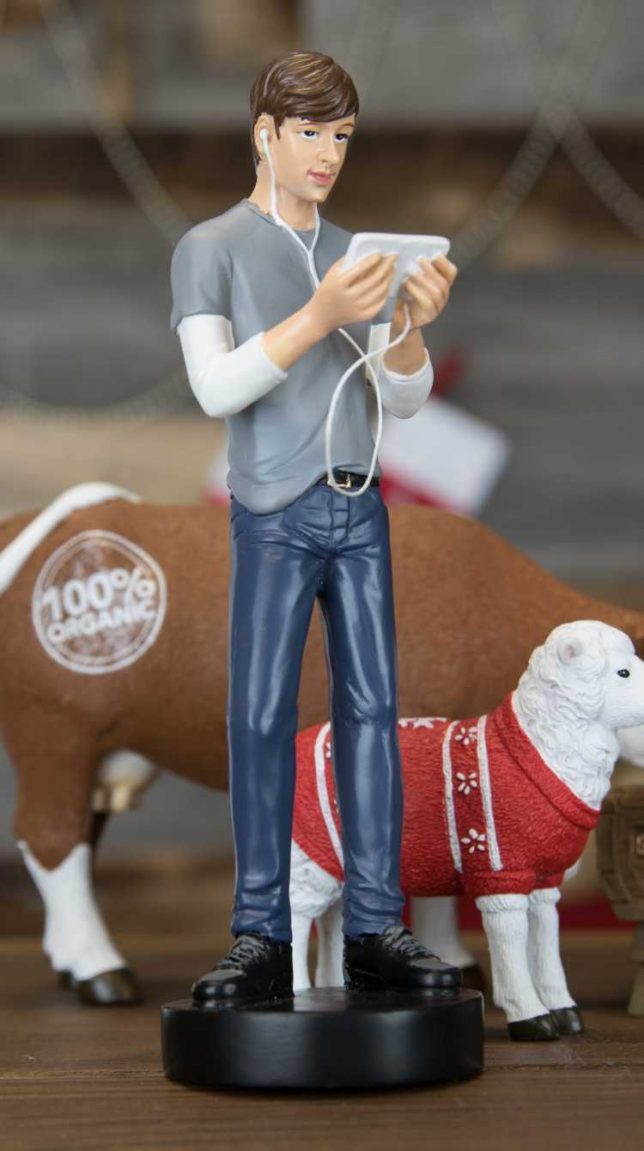 Meanwhile, the fashionably sunglassed Three Wise Men roll in on Segways bearing gifts bought online at Amazon. The shepherd captures the miraculous event for posterity by posting it on Instagram using the hashtag #babyjesus. Clean green electric power for his tablet provided via solar panels on the manger’s roof because global warming. 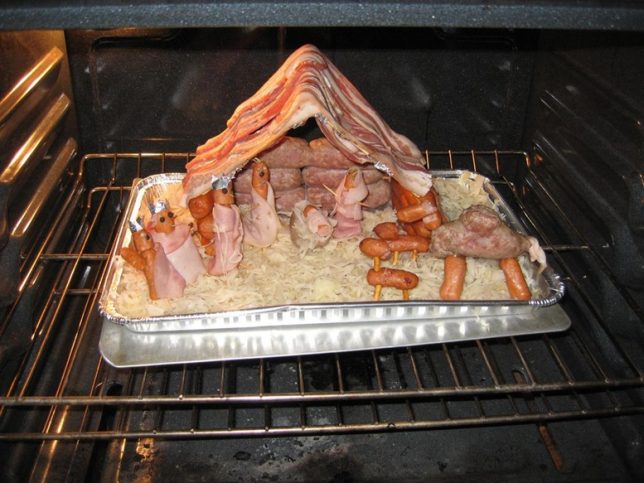 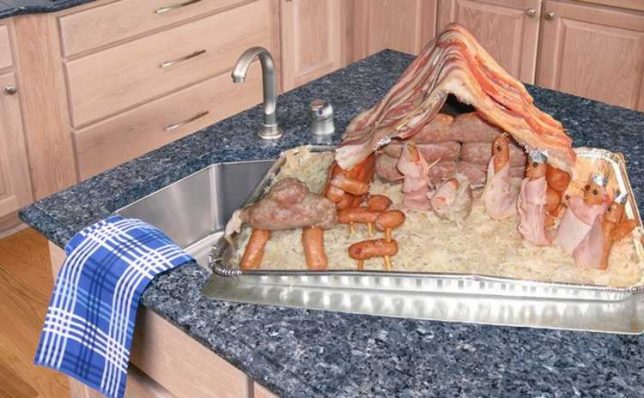 Y’know, we liked The Last Supper a lot better when Leonardo da Vinci painted it but hey – not everyone’s a vegetarian. Flickr user quik86 uploaded this iconic image of a baking bacon and sausage nativity back in December of 2010 but some things never get old, especially when they’re smothered in bacon. 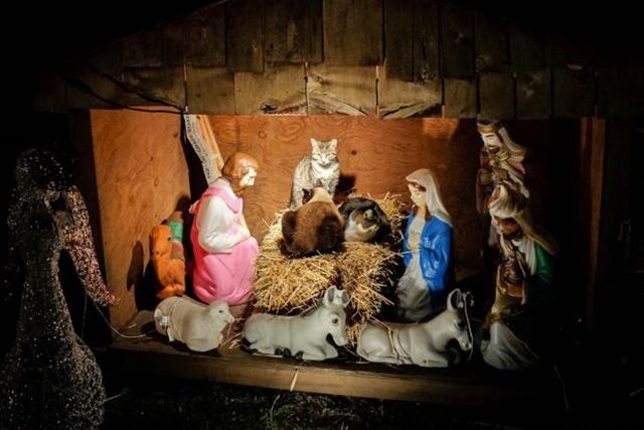 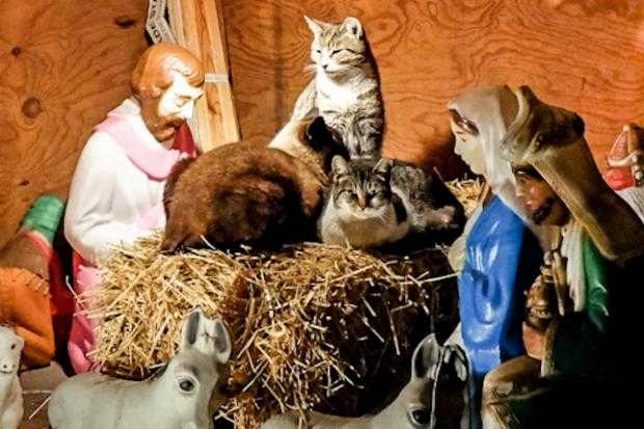 For over ten years, sisters Annette and Sue Amendola have been setting up a classic nativity scene outside their home in Red Hook, Brooklyn. The scene itself wasn’t out of the ordinary… at least it wasn’t until a bunch of stray cats arrived and made it their own. 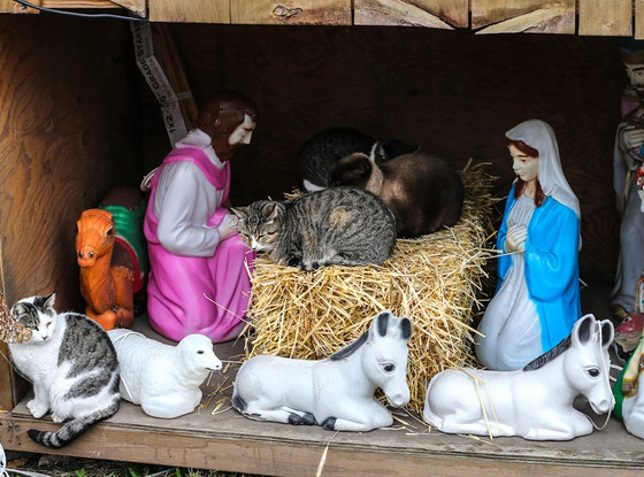 The clowder of kittehs was first attracted by food the Amendola sisters would leave out but then stayed to enjoy the replica manger’s comfy bales of hay. “When the figurine of baby Jesus does finally appear on the hay bale,” explains Annette, “the cats usually push him right off to take their rightful spot.” Cats: doing the devil’s work since 0 AD. 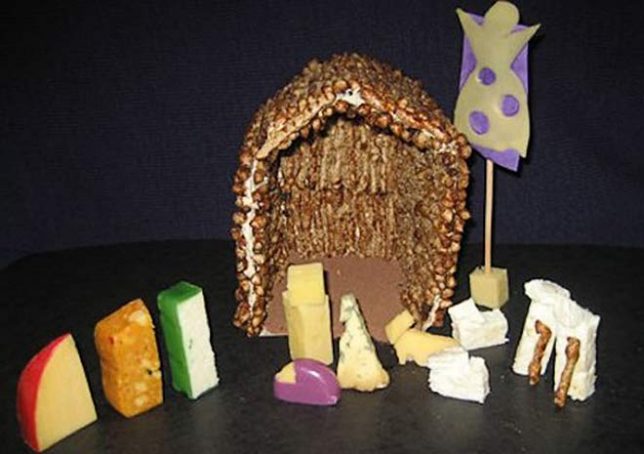 We’ve got your cheesy nativity scene right here, highlighted by a Babybell Jesus and an Emmental angel personifying Oh Hole-y Night. Not suitable for the lactose intolerant.