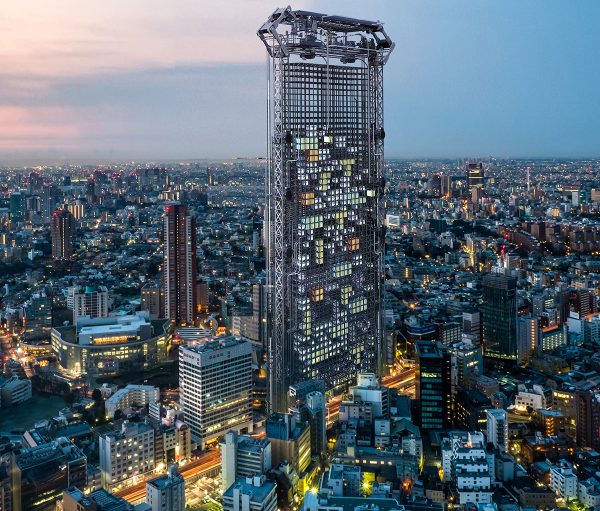 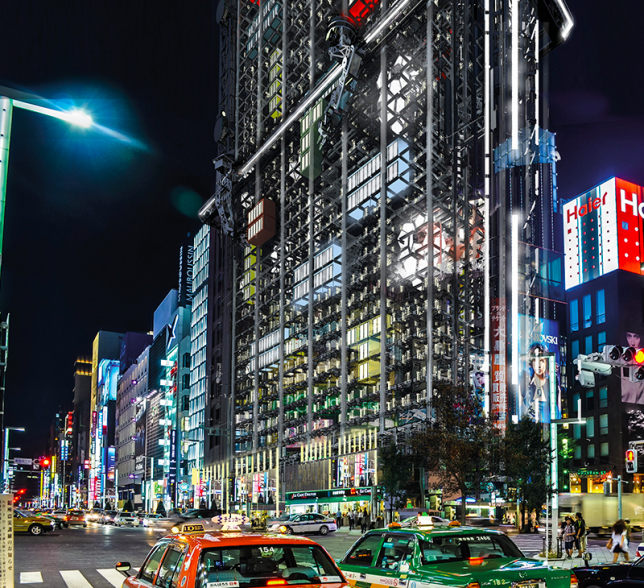 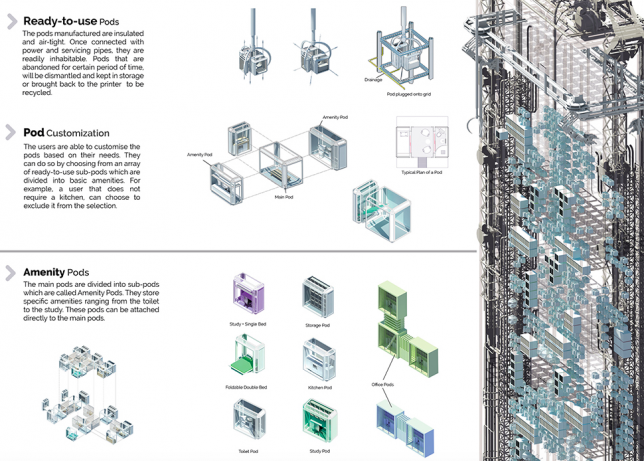 Shop for a new living space right in the factory where they’re made without leaving the city with the Pod Vending Machine Skyscraper, which places a 3D pod printer at the top of the tower. Ready-to-use pods manufactured on site are insulated, air-tight and ready for connection to utilities, and then customized according to the user’s needs. The lobby is filled with self-service machines connected to the building’s interface so users can purchase and customize their pods in an automated system. The idea is that such a system would eliminate constant construction in cities, reduce waste and make architecture more affordable and recyclable while taking advantage of robotic manufacturing. 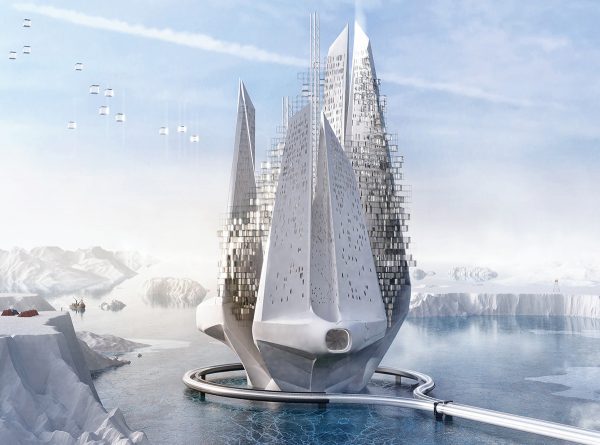 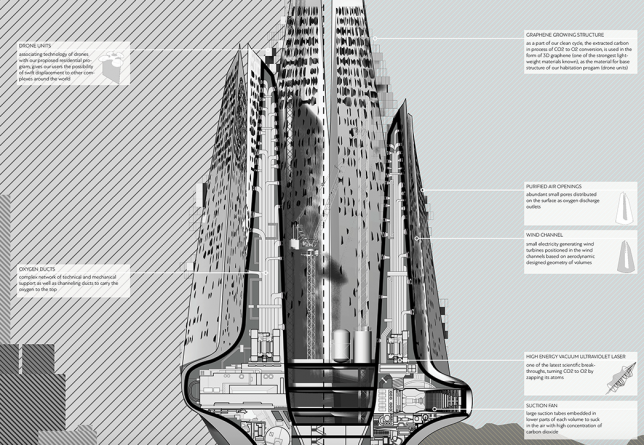 If all the worst-place scenarios of climate change come true, can humans come up with new ways to survive through global collaboration and the sharing of technologies and knowledge? The HEAL-BERG creates independent complexes “designed to cease, heal and reverse the process of climate change and its impact on the earth” through the most recent technology breakthroughs including converting carbon dioxide to oxygen by zapping it with lasers, ocean water cooling and desalination, using a 3D form of ultra lightweight graphene as a building material, hyper loop transportation and drones. “Utilization of so-called technologies is not only to face the current environmental issues – such as air and water pollution and temperature rise – but also to provide residency for victims of the late changes, given the fact that HEAL-BERG is a source of clean energy, sustainability and entirely exempt from pollutions.” 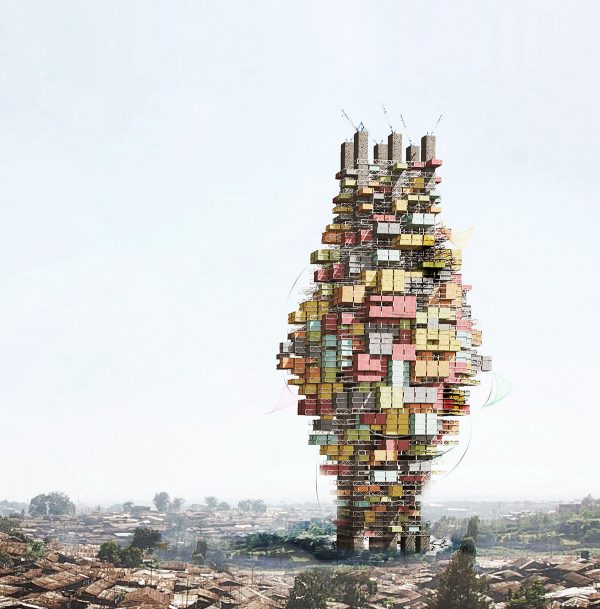 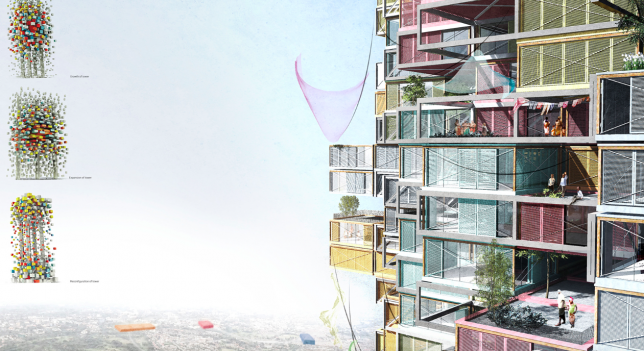 As Tanzania’s oldest city of Dar es Salaam grapples with extremely rapid economic growth, many of its oldest settlements are being wiped out to make way for new commercial developments, displacing hundreds of thousands of people. While the core of the city itself has become much less poor, the reality is that poor residents have been pushed outside its borders. The Adaptive Capacity Tower creates a ‘vertical village’ with safe, sanitary living conditions as well as offices, workspaces, education, childcare and other programs.

“A vast amount of high-rise buildings in hot climates mimic western models with sealed facades, reliant on air-conditioning and have little solar shading. This proposal intends to protect inhabitants and take advance of the weather conditions of Dar es Salaam. The building provides a naturally ventilated, perforated, indoor-outdoor and shaded model to suit the tropical climate. The project is modeled by slum-dwellers autonomous lives, by being self-sufficient, in mimicking nature’s closed loop system.” 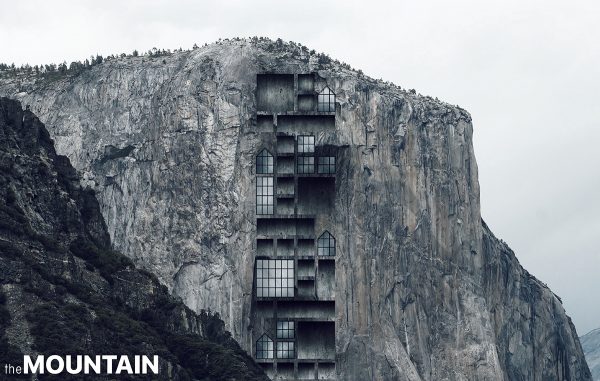 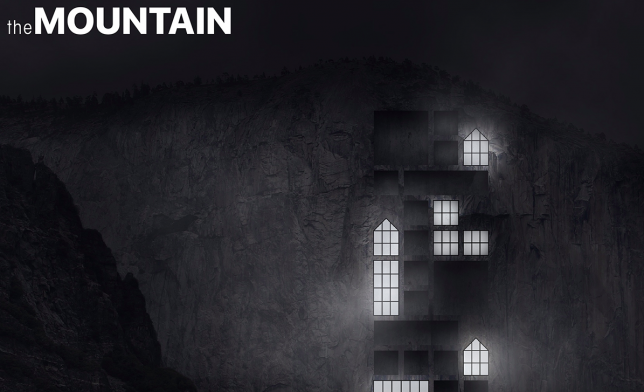 Attempting to build a relationship between nature and human developments by adapting architecture to its setting, The Mountain is a skyscraper set within the very rock of California’s Yosemite National Park, encouraging observation, exploration, preservation and research. “The Mountain takes the primitive idea of naturally cavernous space and combines it with the form of a modern skyscraper. Using a grid to establish a framework for the design, the mountain cliffside becomes the host for the spaces to be carved out of. These extrusions are negative spaces embedded in the towering natural structure of the earth. Individually, the habitats are able to occupy different programs varying in scale.” 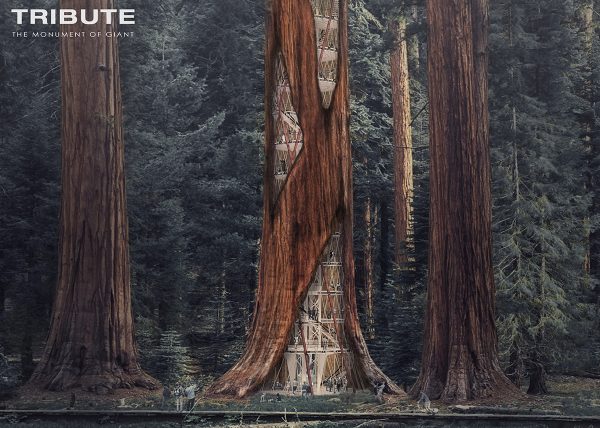 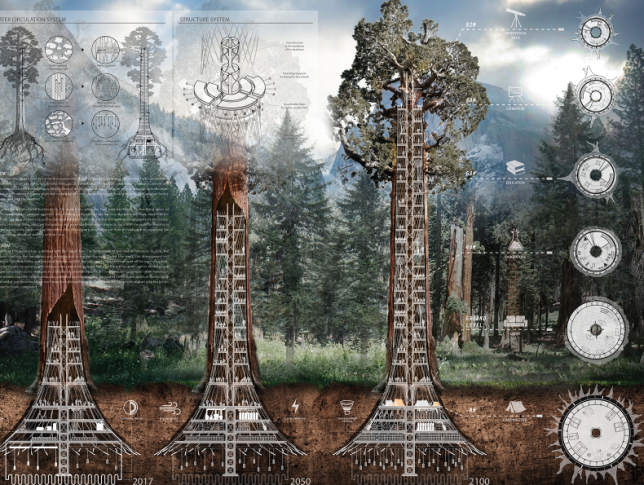 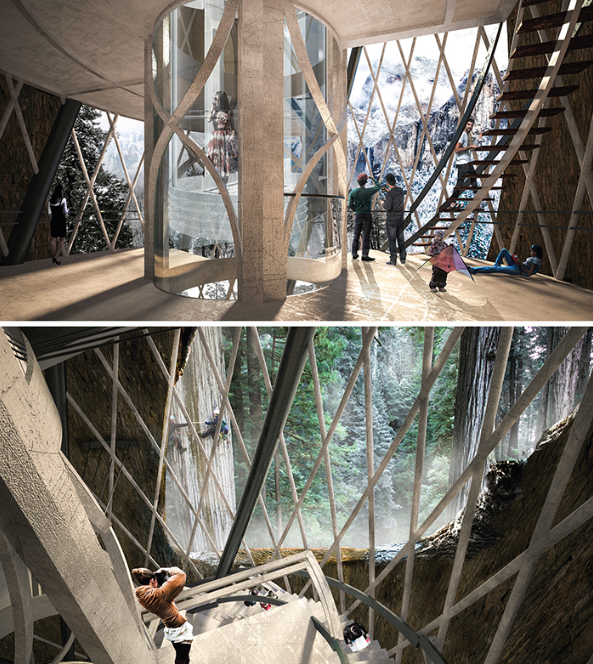 Noting the dire impact of deforestation on the environment, the creators of the Giant Sequoia Skyscraper say it’s time to find a better equilibrium with nature. Global warming has shortened the life span of the Giant Sequoia tree in the United States – but could we adapt our way of living to preserve them in some form, perhaps learning to respect our natural environment in the process? This concept places entire research and education facilities within the trunks of the giant trees, acting like artificial organs to replace the heartwood once the tree has died. The structure pumps water and nutrients up into the branches while taking advantage of the hollow core as interior spaces.