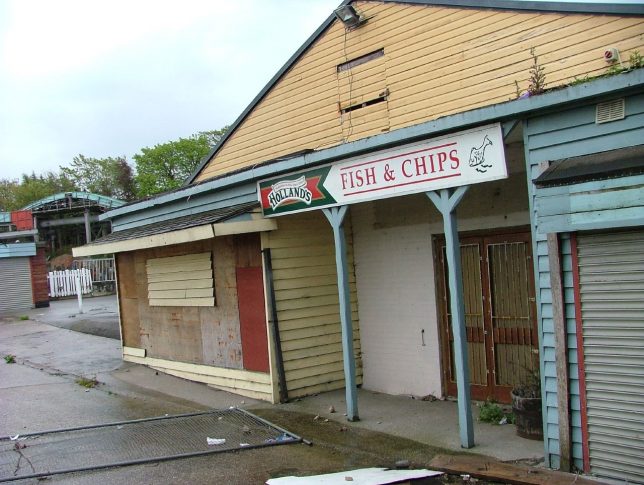 Old West towns weren’t really known for their chips unless you were in the saloon playing poker, and as for fish, well, Tombstone restaurants rarely fried up the Catch of the Day for hungry cowpokes. This particular cowtown is – or rather, WAS – located in olde western England, however. Certainly few save for Flickr user James Welsh (jimwelsh) will recall the long-closed Frontierland theme park in Morecambe, near Lancaster City, where the above image was taken in May of 2005.

Chippies Off The Old Blockhouse 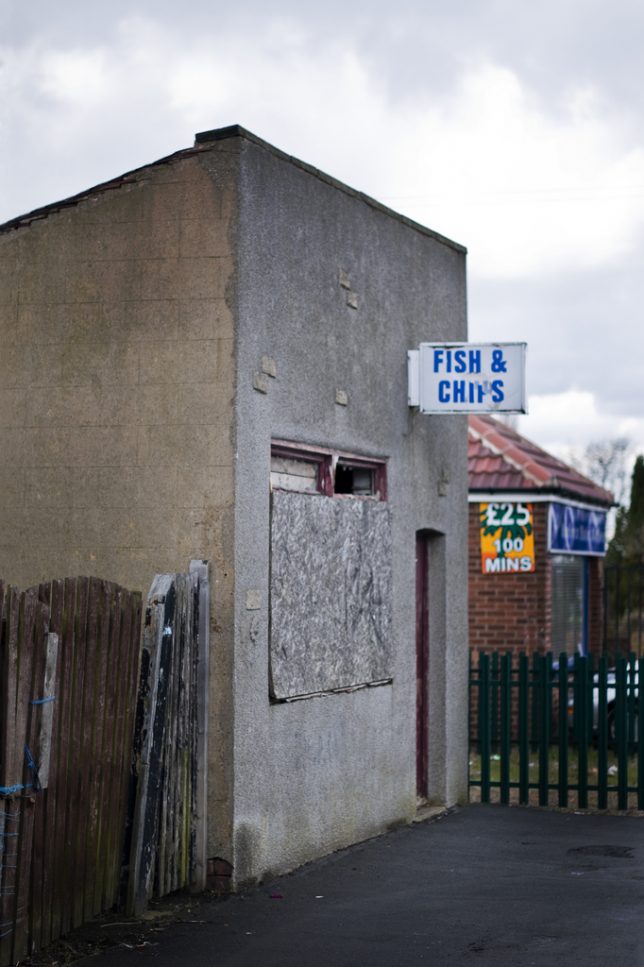 An anti-zombie fortress that serves Fish & Chips? Shut up and take my money! Too late – this unnamed chippie in South Yorkshire, UK looks to have been abandoned for some time. Hope they remembered to empty the freezer before leaving ’cause if you want zombie fish, that’s how you get zombie fish. Kudos to Flickr user Steve Greaves, who snapped the above ominous scene in 2010. 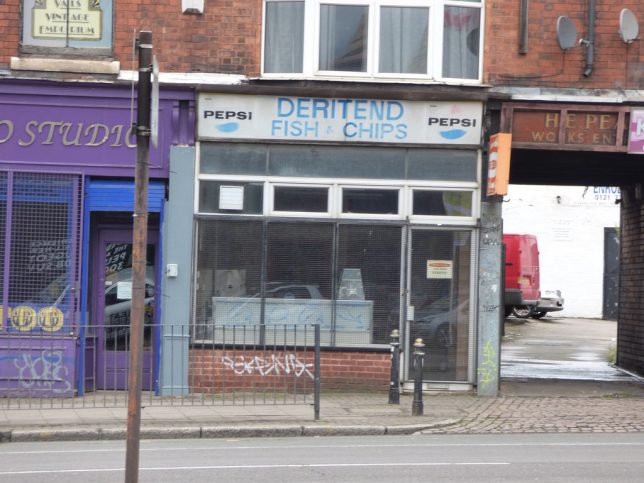 Never mind the bollards (those two metal posts outside the front door), it’s the abandoned Deritend Fish & Chips shop! The rarely seen British sun must have blazed down upon that sign for centuries to cause that level of fading. In any case, credit Flickr user Elliot Brown (ell brown) with this brilliant yet brutal capture of the once-chic chippie located on the High Street Deritend, Digbeth, near Birmingham City, UK on February 27th of 2017.

The Chips Are Down 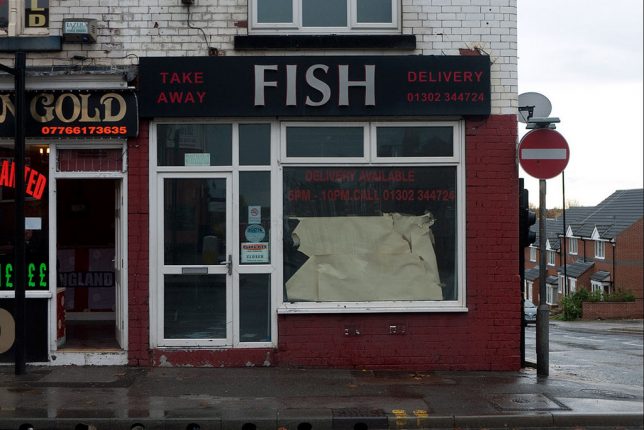 Things don’t get much gloomier than an abandoned fish & chips shop on a dreary English afternoon. Mind you, it could be raining… DOH! Flickr user leon S-D (littleweed1950) came across this abandoned Doncaster chippie with what has to be the most unimaginative name EVAR on July 7th of 2011. As one commenter put it, “Looks like chips are off the menu too.” 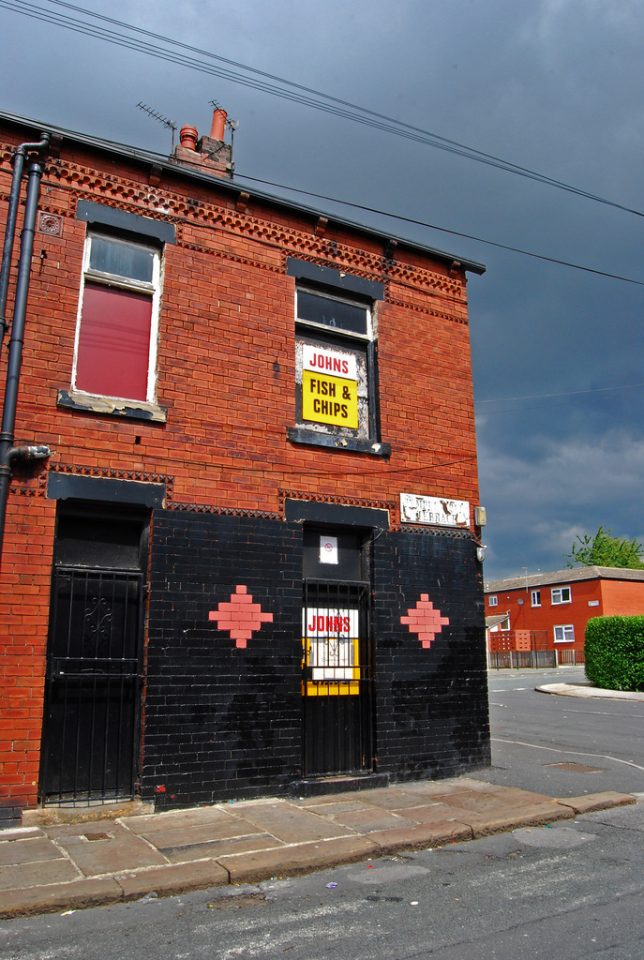 “Johns Fish & Chips shop on Temple View Terrace in East End Park, (Leeds, UK) was closed on the Friday we went by,” according to Flickr user Thomas Ackroyd (Ackers- Schoolboy Hero!!!!), who posted these images on July 10th of 2009. 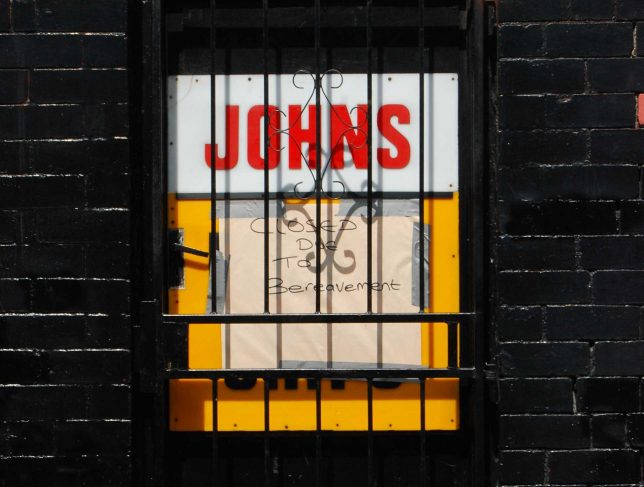 “The sign said ‘Closed due to Bereavement’, apparently after chatting to some locals in the nearby Slip Inn pub we found out that two days before the owner passed away suddenly, much to the shock of everyone and will be sadly missed.” As well, John’s widow “does not have the heart to re-open the shop,” adds Ackroyd, “which is a shame… (because) the Fish & Chips were good.”