Before Mad Men there were Muffler Men – 20-foot tall fiberglass statues cast in the thousands to advertise roadside businesses from coast to coast. 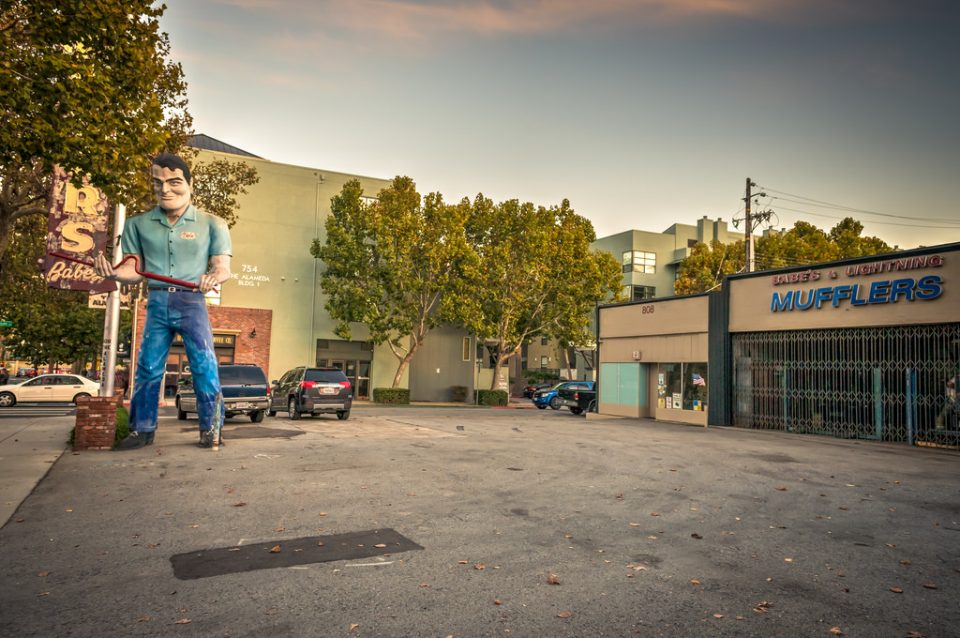 Muffler Men are one of the most enduring forms of mid-century American commercial art though the fact that so many were made – and their near-indestructible fiberglass composition – means that a substantial number of these iconic jumbo figurines still stand (literally) today. Muffler Men like “Babe”, snapped by Flickr member Wayne Stadler in 2016, might seem to be a product of post-war optimism and economic enthusiasm but the first one didn’t actually appear until 1962… and he didn’t even carry a muffler. 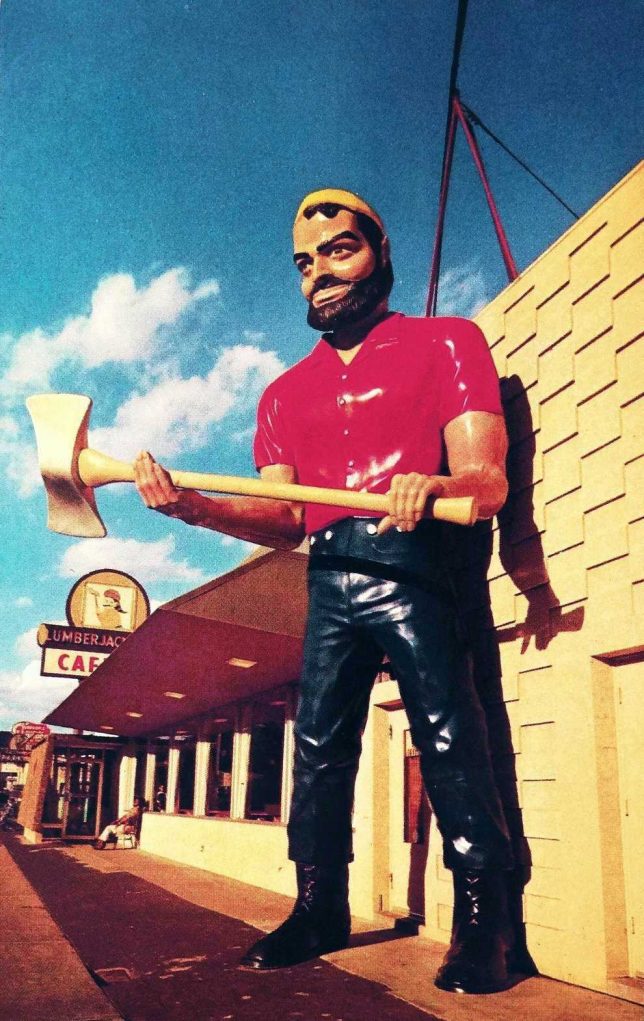 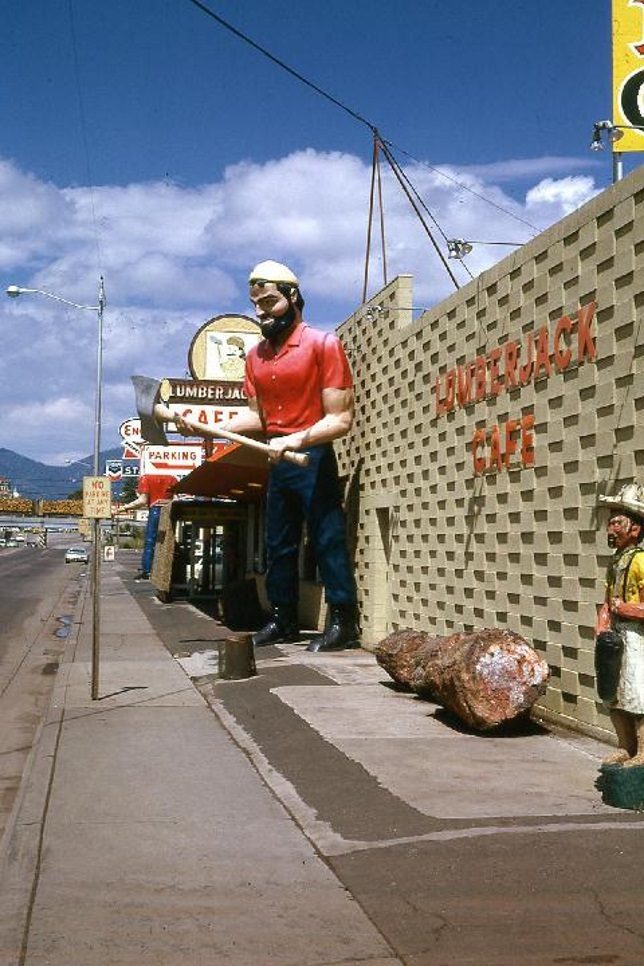 Our plastic fantastic progenitor was modeled after legendary giant woodsman Paul Bunyan and instead of a car muffler he gripped a big ol’ double-edged ax. The 1960s postcard above (courtesy of Flickr member Allen) stood outside the former Lumberjack Café on Route 66 in Flagstaff, Arizona, where a second statue soon joined the first. 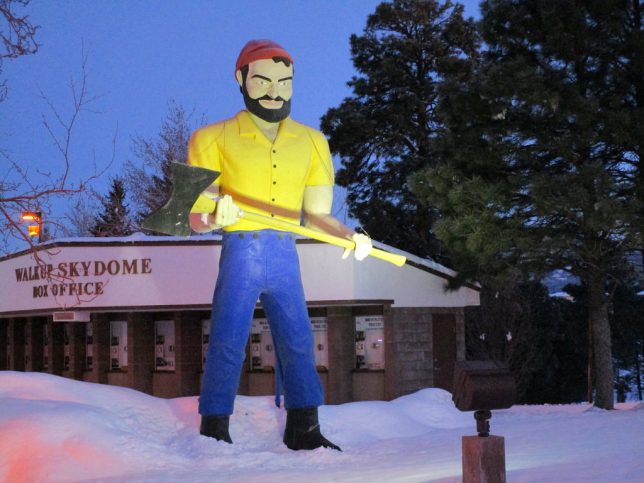 In 1973 the café re-opened as Granny’s Closet, a restaurant in no need of giant lumbermen. In 1992, both figures were moved to the Northern Arizona University (“Home of the Lumberjacks”) campus in Flagstaff where they guard the the J. Lawrence Walkup Skydome. 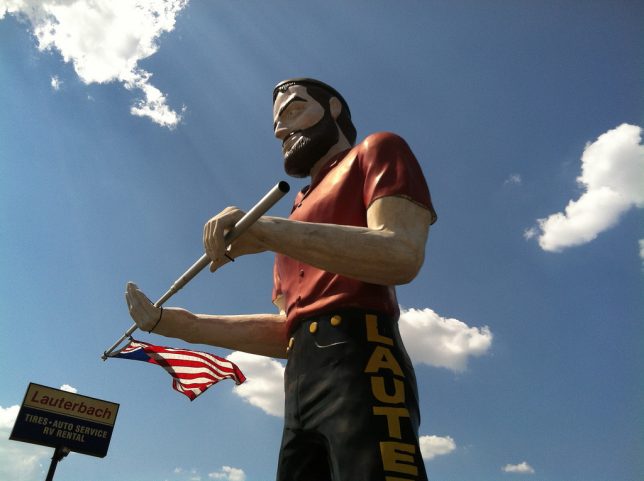 The period from roughly 1955 through 1965 was the heyday of Programmatic Architecture, and Muffler Men arrived on the scene when the scene was jumpin’! At least, that’s what Steve Dashew of International Fiberglass must have been thinking when he bought out Prewitt Fiberglass in 1963. Bob Prewitt had designed the Lumberjack Café’s statue and more importantly, the moulds: the heavy lifting had already been done, so to speak. Muffler Men – the term arose from a deal with a nationwide chain of muffler shops – began springing up left, right and center. Flickr member Thomas Crenshaw snapped this snazzily-painted and uber-patriotic example in August of 2012. You wish you looked as good when you’re sixty!

Take This Job & Shovel It 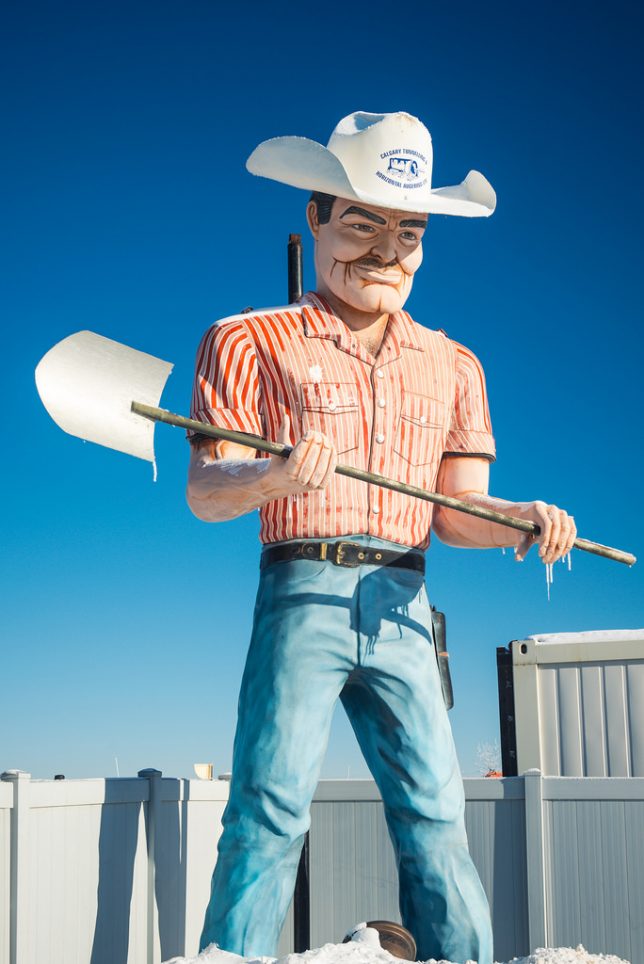 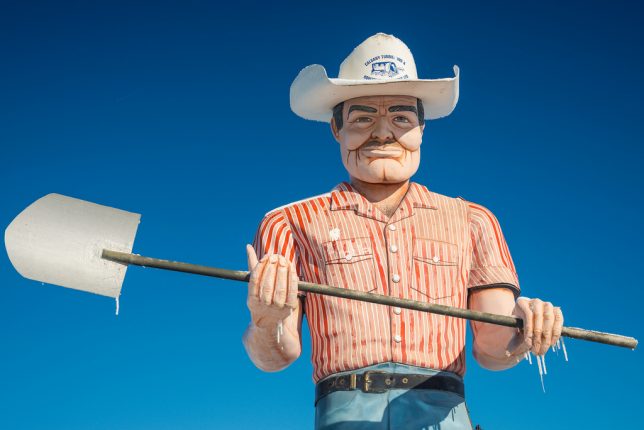 More than a few Muffler men made it across the Canadian border where they were employed similarly to their Yankee brethren. The shovel-wielding roadside giant above hails from Calgary, Alberta where he was snapped by Flickr member Wayne Stadler on a frigid January 2016 day, standing in front of Calgary Tunnelling & Horizontal Augering Ltd. As with most true Muffler Men, paint and minor details such as beards, hats and whatnot may vary between figures but the hands – one upturned, the other downturned – are dead giveaways as to the figures’ origin.