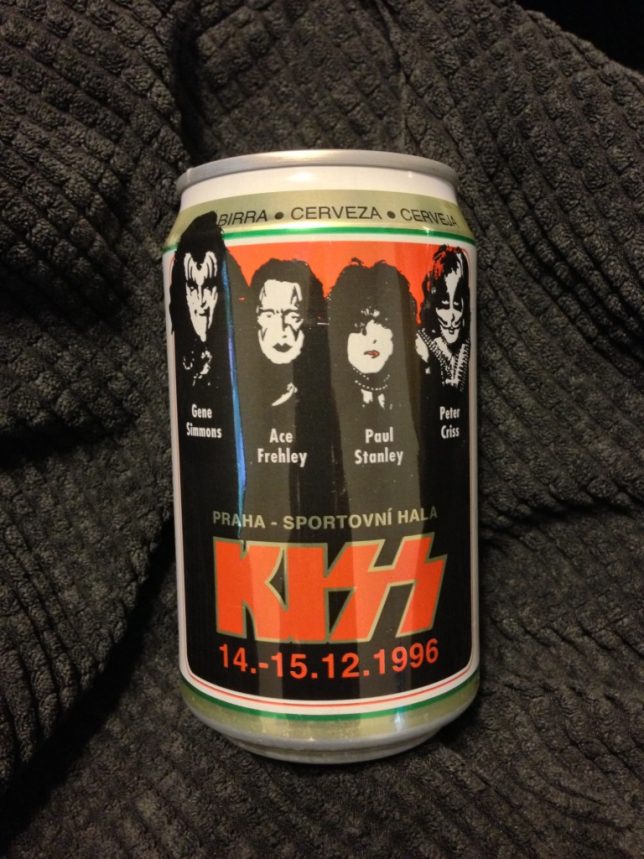 We discussed KISS Destroyer Beer a few years ago in At The Hops: 9 Loud & Proud Rock ‘n’ Roll Beers but the Swedish-made brew released in 2010 is far from the only KISS wobbly-pop. It’s also far from the most collectible, as an empty can of Pilsner Lirqueri beer from the Czech Republic is listed for $19.95 at the KISS Museum site. The beer was issued in very limited quantities back in December of 1996 in honor of two concerts KISS played in Prague. Those must have been some rockin’ concerts… anyone remember being there? 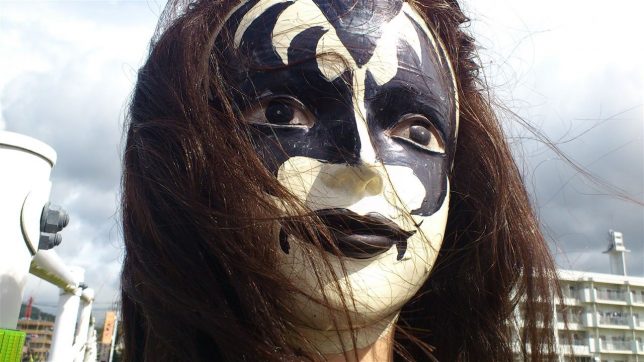 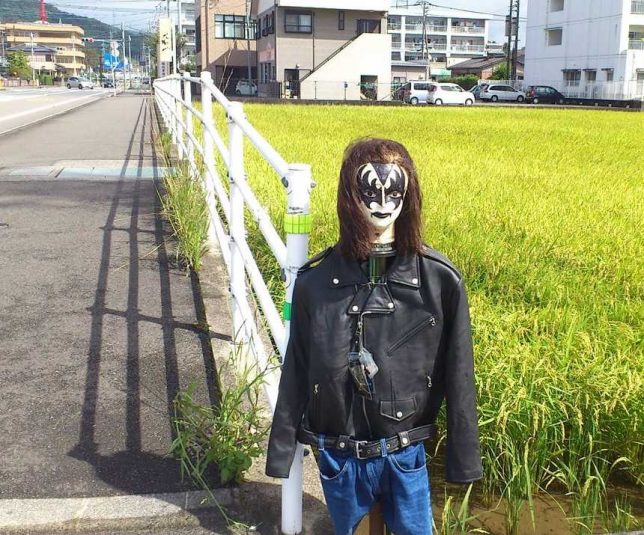 Despite the near-Disneyesque diligence of Gene Simmons in protecting the KISS brand, now and then a KISS-themed item slips through the cracks. Mind you, if the farmer who adapted the above discarded hairstylist’s practice mannequin into an oddly mild-mannered Demon scarecrow began mass-producing them, you can be sure Gene Simmons himself would be breathing blood & fire down his neck. 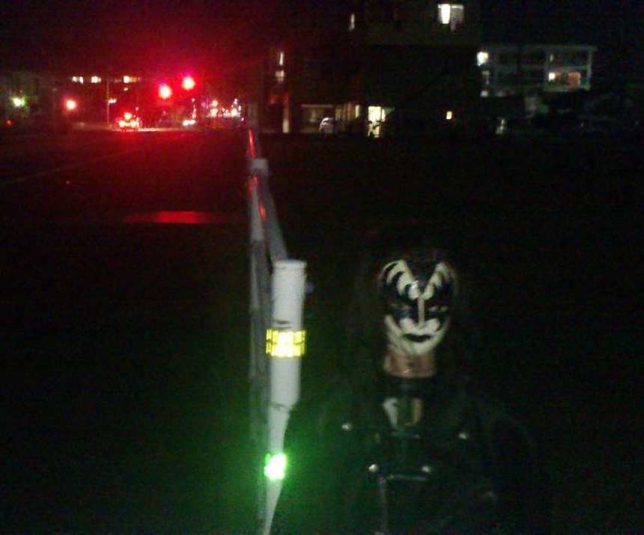 The “artist” didn’t put too much effort, time or expense into their crow-scaring cosplay: perhaps he should have attached an official KISS Inflatable Tongue to complete the look. We’ll give him this much; the scarecrow looks a lot scarier at night. Too bad crows are day-active. 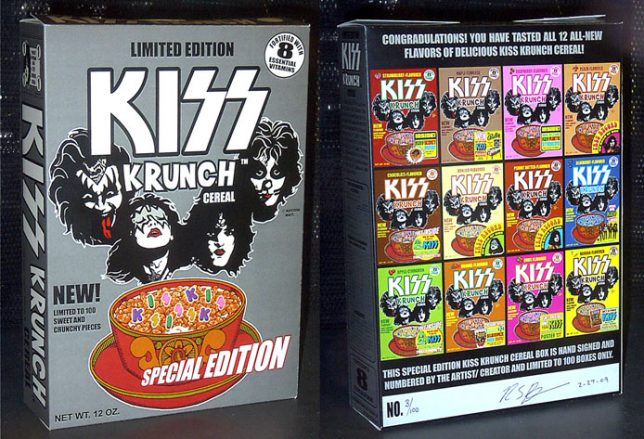 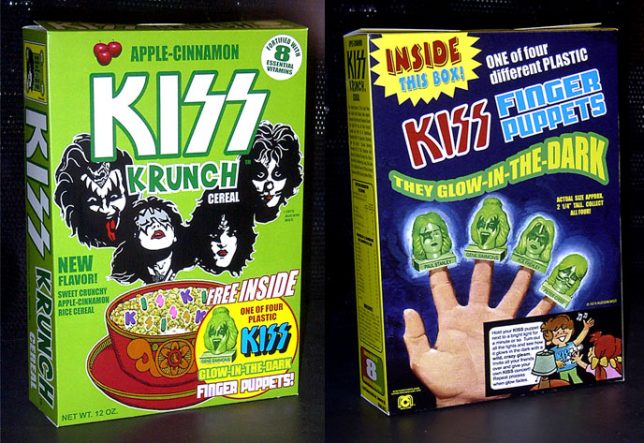 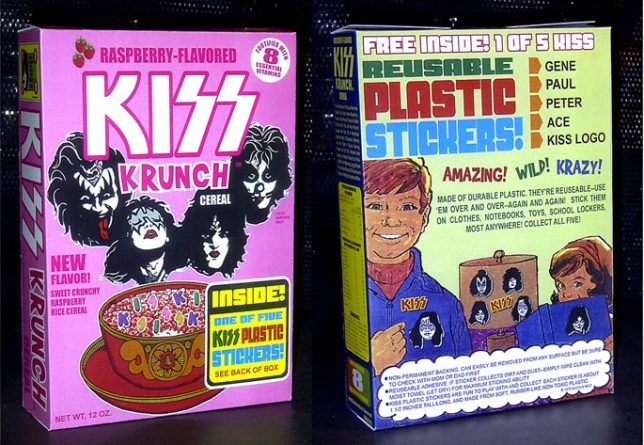 KISS has been knocked for catering to a younger demographic at times, though we can’t really blame the group for this awesome series of mock KISS Krunch cereal boxes. Created in the year 2000 by a KISS fan with obvious talents (and plenty of time on his hands), the series of 12 different flavors plus a special Platinum box can be seen at Robb (planet-Q!)’s Flickr page. Lick ’em up! 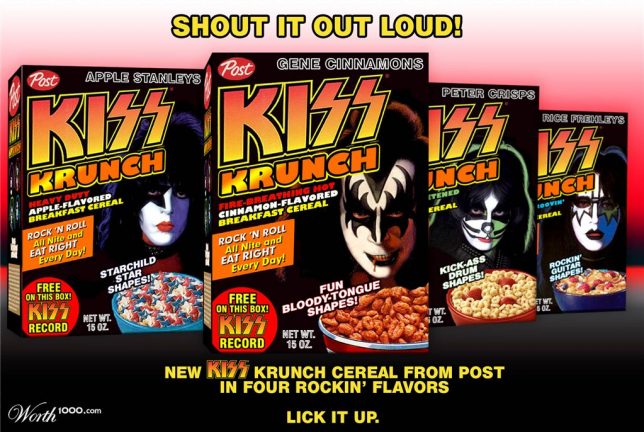 This somewhat more recent computer-assisted image from Worth1000 takes the KISS Krunch cereal concept to yet a higher level. Ya gotta love those “fun bloody-tongue shaped” Gene Cinnamons; doncha wish they were real?