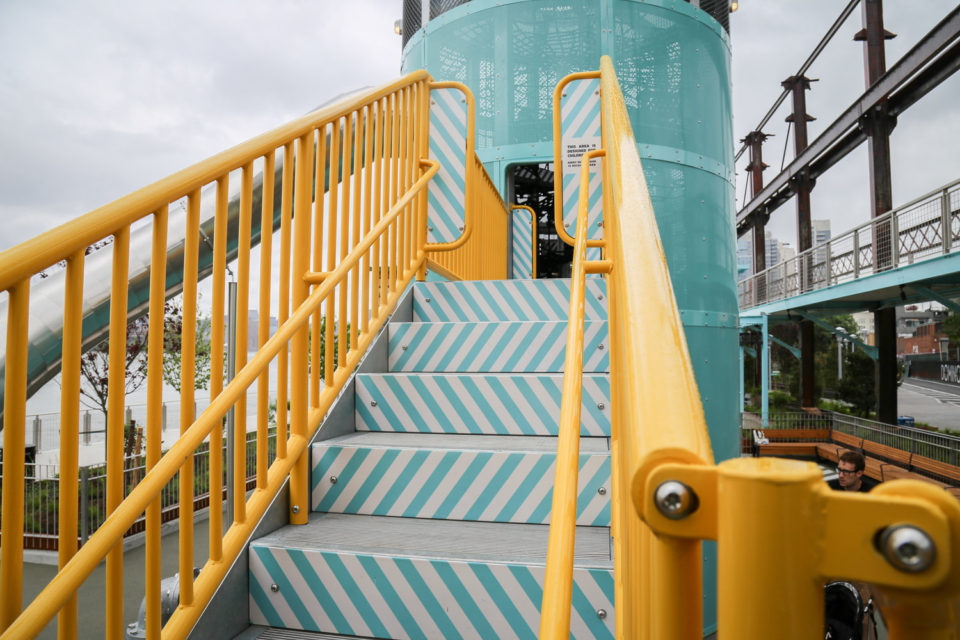 A park with good taste? It’s more likely than you think thanks to locally-based artist Mark Reigelman and what used to be the world’s largest sugar refinery. A Williamsburg waterfront icon for the better part of two centuries, the old Domino Sugar Refinery has been transformed into Domino Park boasting a site-specific play environment called Sweetwater: “the sweetest playground in New York City.”

How Sweet It Was 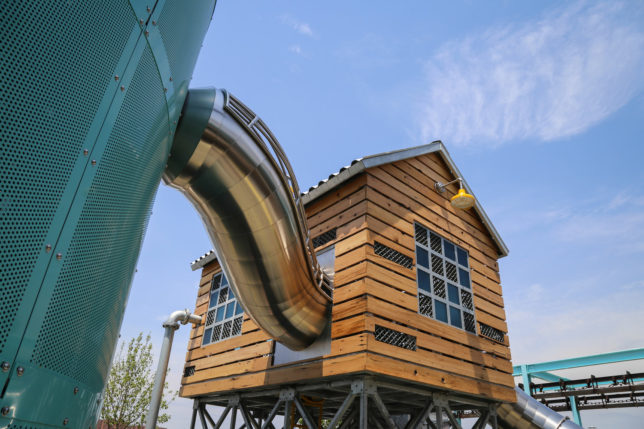 Reigelman set out to create more than just a playground, though the result is eminently playable on its own. Instead, the artist elected to pay homage to the former Domino Sugar Refinery and, by extension, the long history of sugar manufacturing in America’s vibrant northeast. In a glazed nutshell, the playground invites children to explore the sugar refining process without getting their hands sticky, no matter what the weather.. 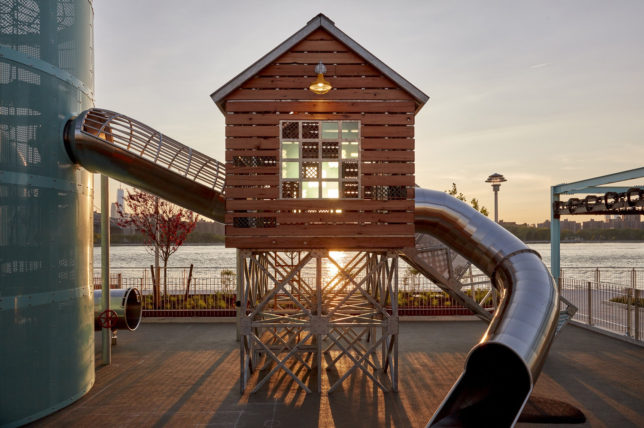 The Domino Sugar Refinery was built in 1856 and additional infrastructure made it the world’s largest sugar refinery by 1882. The location on the banks of the East River facilitated the import of raw sugar cane from around the world. The factory employed approximately 4,500 people at its height, giving countless numbers of immigrants a boost into the American workforce – melting pots made for sugar AND people (though not at the same time). 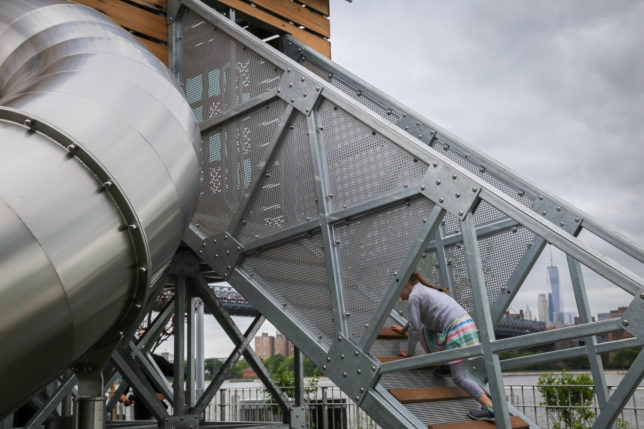 The factory ceased sugar refining operations in 2004 and stood abandoned until 2017, when the James Corner Field Operations-designed waterfront space known as Domino Park was created. Opened to the public on June 10th of 2018, Domino Park invites visitors of all ages to enjoy the remnants of this historic site, the soaring Williamsburg bridge, and the iconic Manhattan skyline. The youngest among us might have the most fun, however, as they climb up and down ramps, worm their way through tubes, trundle across conveyor belts and zip down slides from one end of Sweetwater to the other. 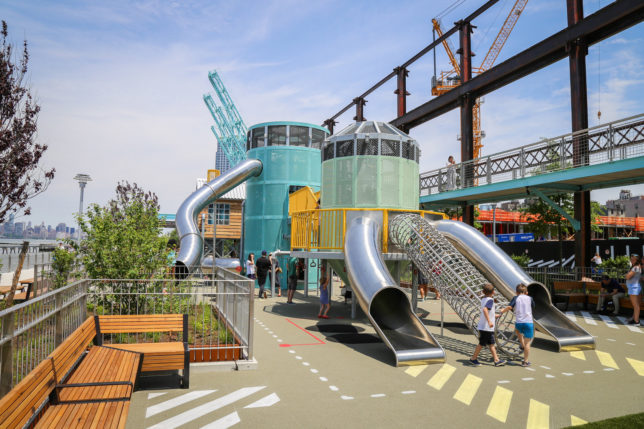 Reigelman designed Sweetwater in three distinct interconnected stages: Sugarcane Cabin, Sweetwater Silo, and Sugar Cube Centrifuge. Following the path of raw sugarcane as it arrived at the refinery in days of yore, kids will be chopped up and crushed inside a replica industrial cabin, strained and filtered into sweet water syrup, and finally emerge fully-processed into freshly refined raw sugar… figuratively, of course. Fear not, helicopter parents, your precious progeny will return as sweet (or sour) as they entered. 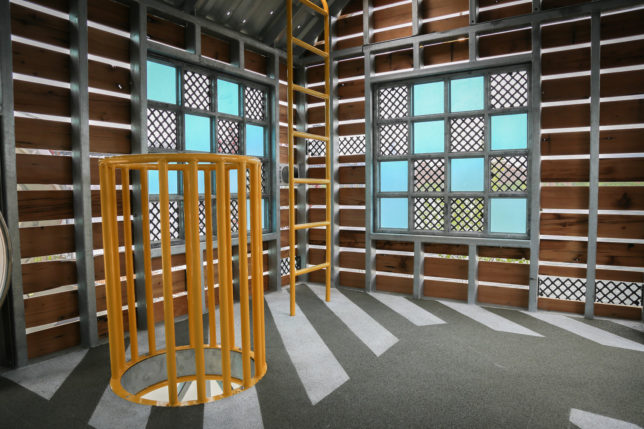 Reigelman’s tribute to the old sugar factory relies much on the inclusion of preserved and replica industrial artifacts scavenged from the old refinery complex. Wood floor planks enjoy a second life on the walls of the elevated cabin while colorfully-painted valve wheels cast from the original factory artifacts allow park guests to get a “hands-on” feeling of what the factory was like. Reigelman also sought to disabuse any thoughts of grim Industrial Age workhouses by liberally employing the vibrant yellow, turquoise, green and brushed metal hues that made up the original factory color palette. 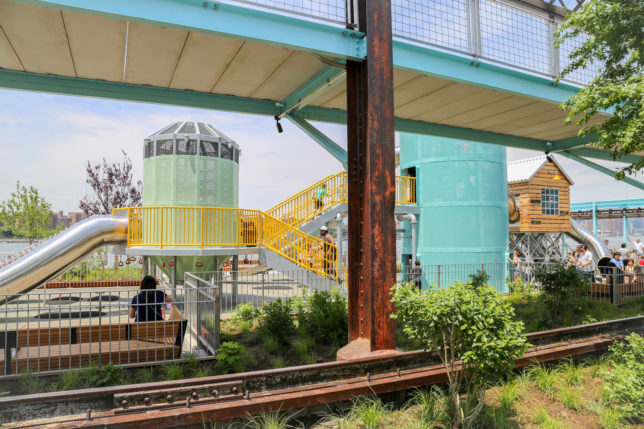 Kids might be having too much fun negotiating Sweetwater Park’s 3D twists and turns to notice there’s a method to the interactive “madness”. Reigelman’s master plan envisioned three primary structures: an elevated cabin, a towering silo, and an industrial container. 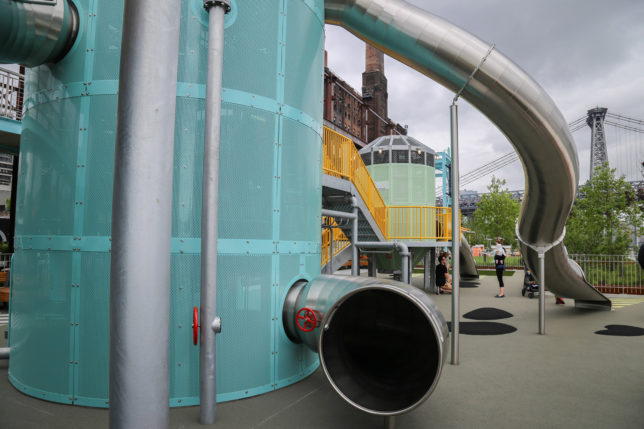 Stainless steel slides, ramps, ladders and catwalks evoke the atmosphere of the old Domino Sugar Refinery’s complex and complicated architecture and infrastructure. Think of those “Powerhouse” scenes from old Looney Toons shorts and you’ll get the picture. “Truthfully speaking, we might have to join the kids during their outdoor playdates,” according to TimeOut Magazine.

A Treat Grows In Brooklyn 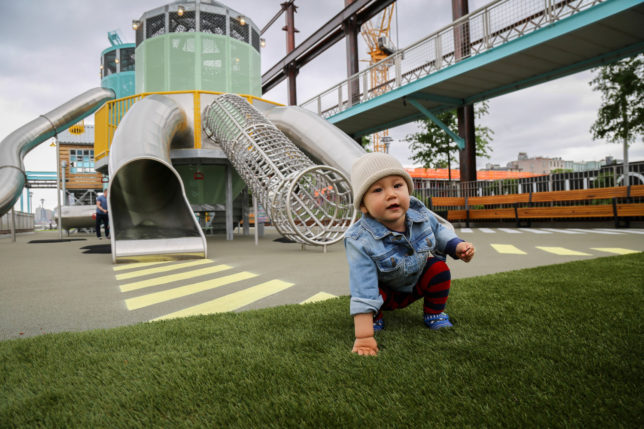 “Domino Park Playground was inspired by the ingenuity of the industrial age, the sugar refining process and the incredible site of the former Domino factory,” to quote from a statement by Reigelman. “The playground is not a celebration of sugar, but a reflection of industrial infrastructure that promotes physical activity, social engagement and a reminder of the unique history of the Domino Waterfront.” One would hope disquieting aromas off the nearby East River don’t cramp the fun factor. 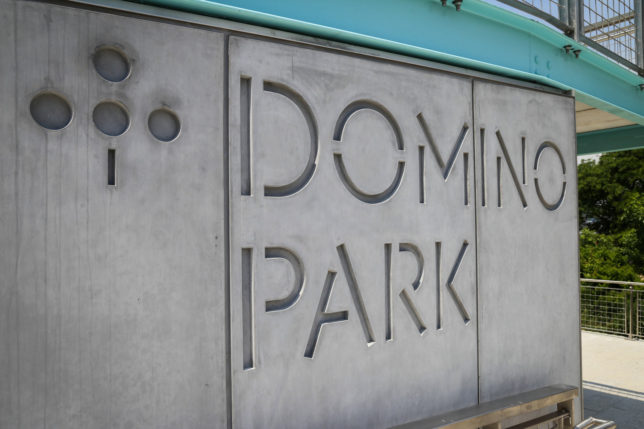 “With a sugary color palette, dynamic graphics and an industrial visual narrative, Domino Park Playground sets children and adults alike into a space that ignites the adventurous spirit,” adds Reigelman. Best of all, a visit to Sweetwater Park won’t prompt a round of tooth-brushing nor a painful trip to the dentist.