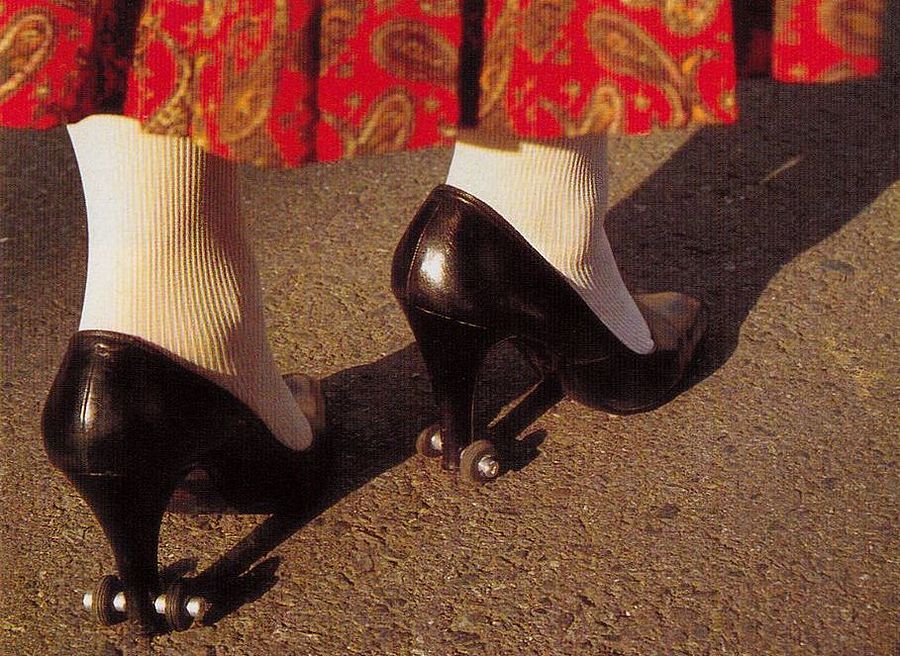 A little bit Dada, a little bit “only sold on television,” intentionally useless inventions called Chindogu look like a bunch of plastic junk at first glance, but there’s more to it than that. And they’re not quite altogether useless. In fact, as creator Kenji Kawakami stated when he first revealed Chindogu to the world in 1995, these objects are “un-useless.” They have a purpose, but they take their halfway practical solution to a perceived problem and stretch it to maximum absurdity. It’s all kind of dumb, and that’s the point. 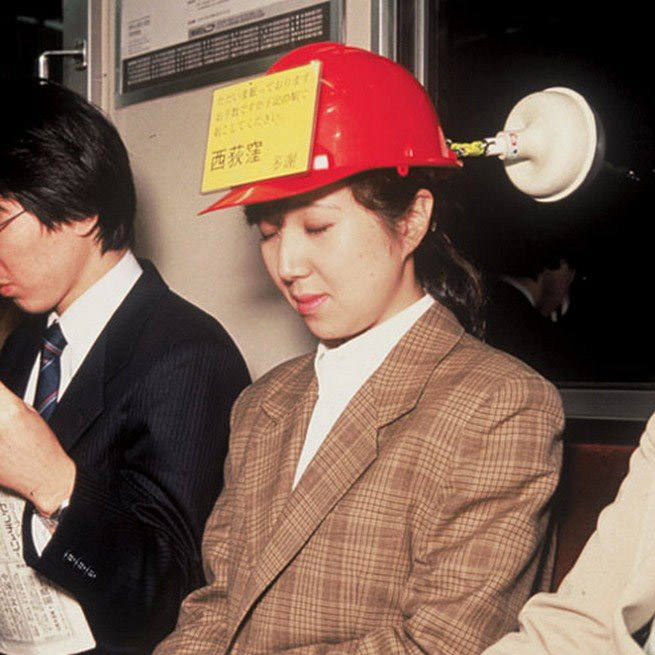 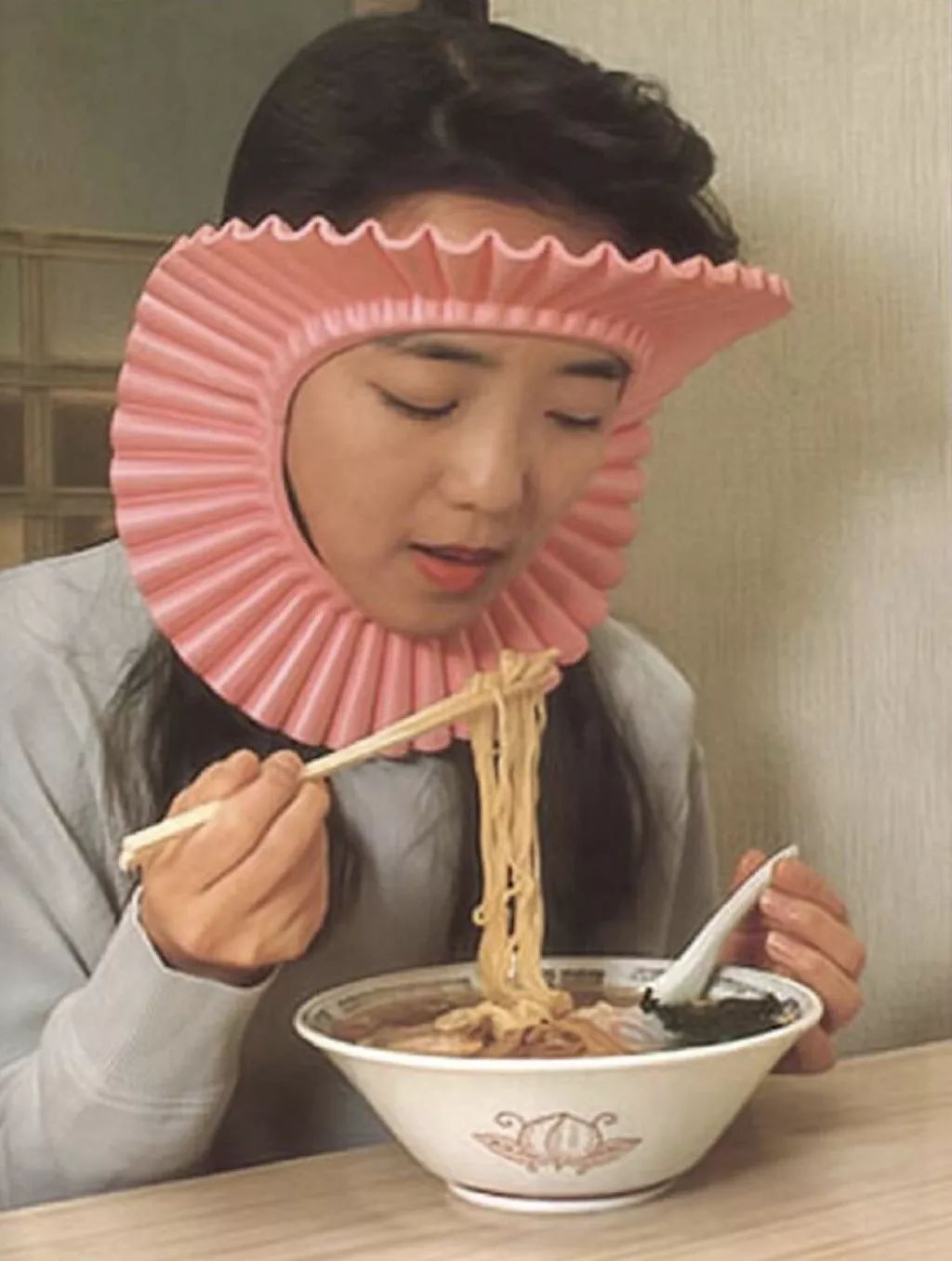 Chindogu literally translates to “weird tool,” and that’s clearly what these inventions are. There’s a face shield so you don’t splatter ramen broth in your hair. A tiny broom and dustpan attached to the tips of your shoes let you clean the floor very awkwardly, getting the broom filthy as you walk through the city. A suction cup attached to a helmet holds you upright when you want to take a nap on the subway. Tiny roller skate wheels on the pointy heels of your stiletto shoes – but only the heels – could almost help you skate along the road. But not really.

Whatever the particular invention is trying to address, it does so in a way that introduces other problems, looks incredibly stupid, or both. But most of the time, the so-called “problem” isn’t a real problem at all. 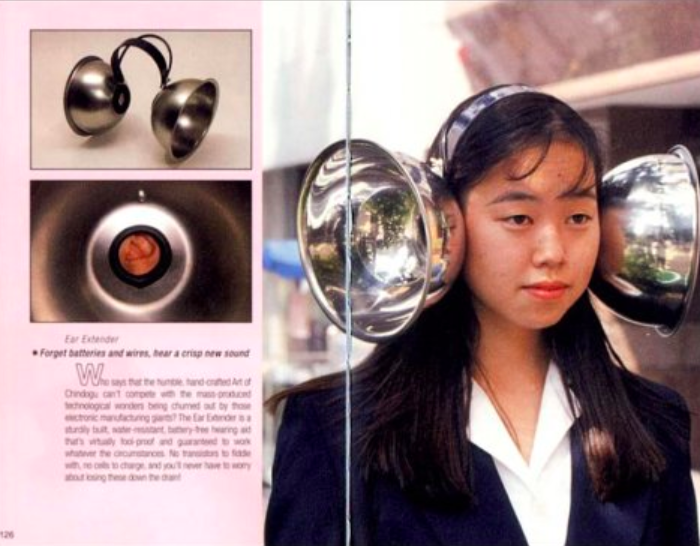 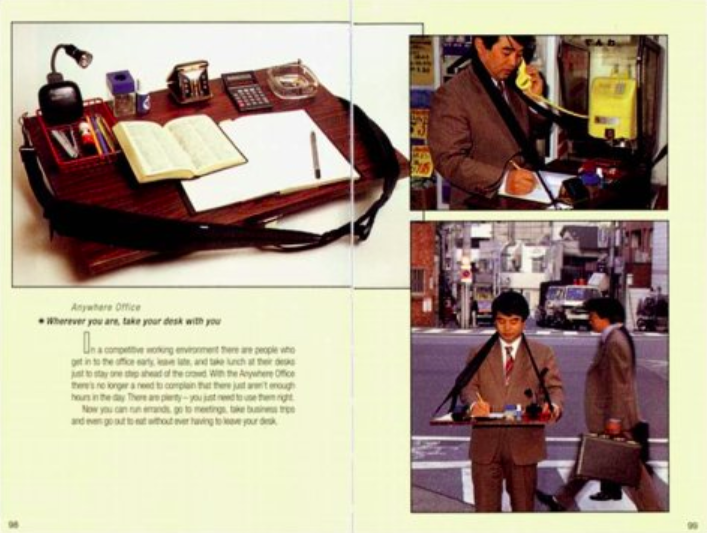 “In our world, all technology is progressing, right?” says Kawakami. “So I thought why not take a simple fork and make it electric. Using this fork, with a single flick of the switch you can effortlessly wind up spaghetti. The only drawback is that the spaghetti sauce goes flying everywhere. So the end result is that it really is better not to use it. And that is what Chindogu means. It isn’t something that anyone would actually use, but it has to be a tool that a person could use.”

If all of this feels like a critique on consumer culture – or you’re just feeling a little ornery about the proliferation of crap on a planet that seems to be rapidly circling the drain – Kawakami has something to clarify about that. Kind of. 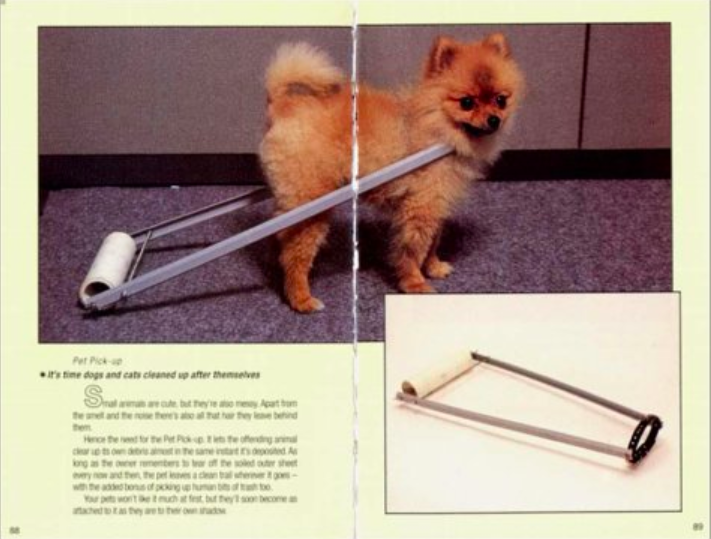 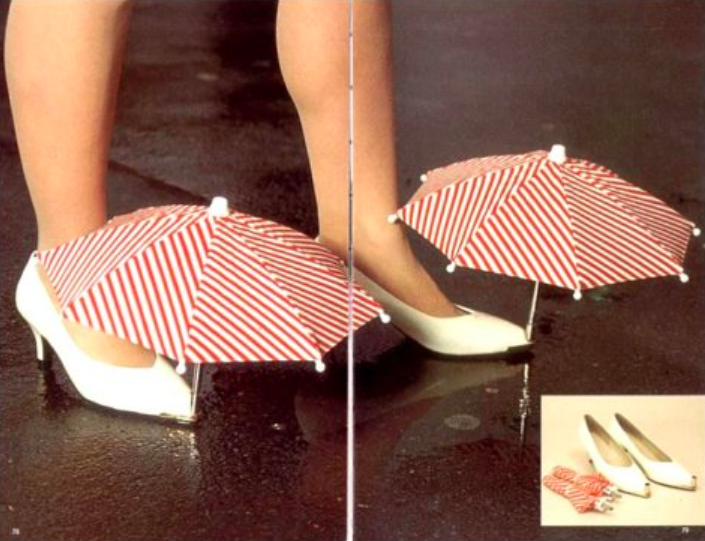 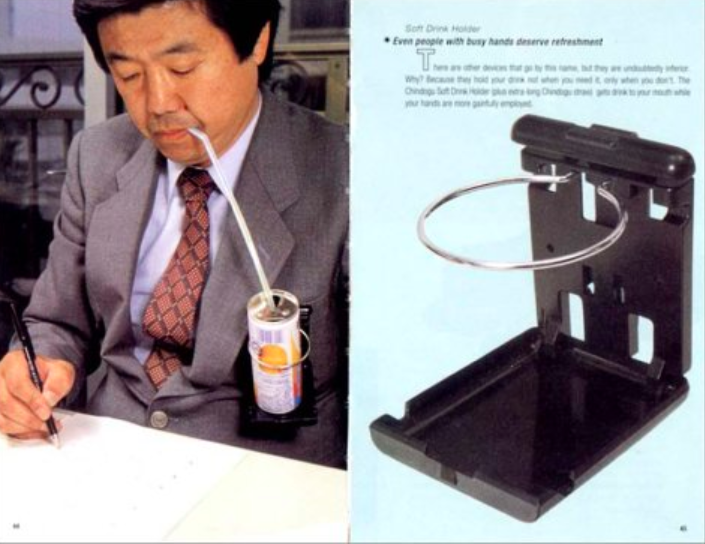 “I despise materialism and how everything is turned into a commodity, things that should be belong to everyone are patented and turned into private property. I’ve never registered a patent and I never will because the world of patents is dirty, full of greed and competition.”

Just browse any old listicle of “products that shouldn’t exist” and you’ll see plenty of wacky items that appear to be based on early Chindogu designs, but with no self-awareness or sense of irony. Ostrich pillows, goldfish walkers, metal-detecting sandals, gag gifts. But not only are these objects a little too useful at times, they fail to be Chindogu immediately simply because they’re available for sale, invalidating the entire purpose. They’re mass-produced and distributed. They’re almost always patented. 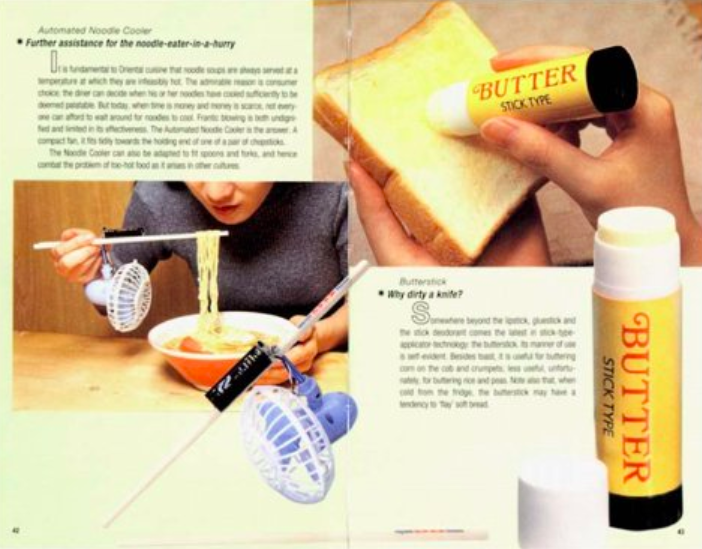 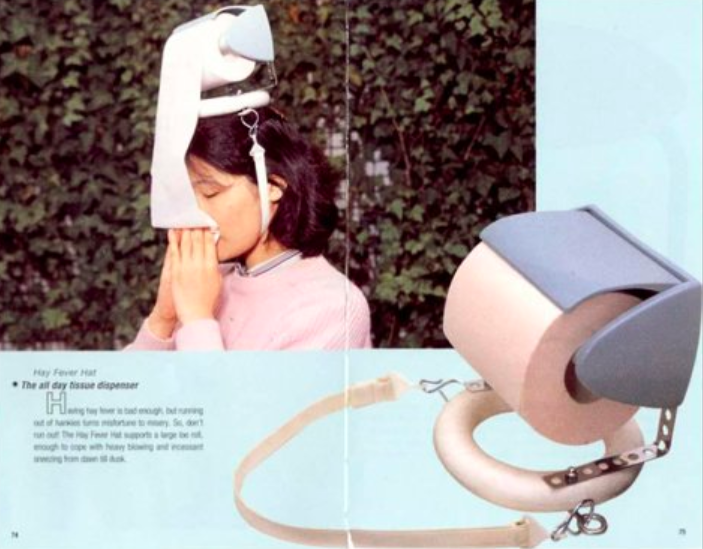 So what actually makes an object Chindogu? Kawakami has helpfully laid out ten vital tenets of Chindogu to explain. To summarize: Chindogu cannot be for sale; it must exist in the real world as a physical object; it must have a spirit of anarchy; it must be a tool for everyday life; it can’t be created purely for the purpose of humor; it must not be used as propaganda; it can never be taboo; it cannot be patented and it can never be prejudiced, i.e. “Chindogu must never favor one race or religion over another. Young and old, male and female, rich and poor – all should have free and equal chance to enjoy each and every Chindogu.”

Just like Chindogu objects themselves, Kawakami’s ‘Ten Chindogu Tenets’ contradict themselves a bit, but that just means any object that claims to be Chindogu has to be a lot more carefully thought out than it appears at first glance. For instance, that seventh tenet says in full, “Chindogu are not propaganda. Chindogu are innocent. They are made to be used, even though they cannot be used. They should not be created as a perverse or ironic comment on the sorry state of mankind.” 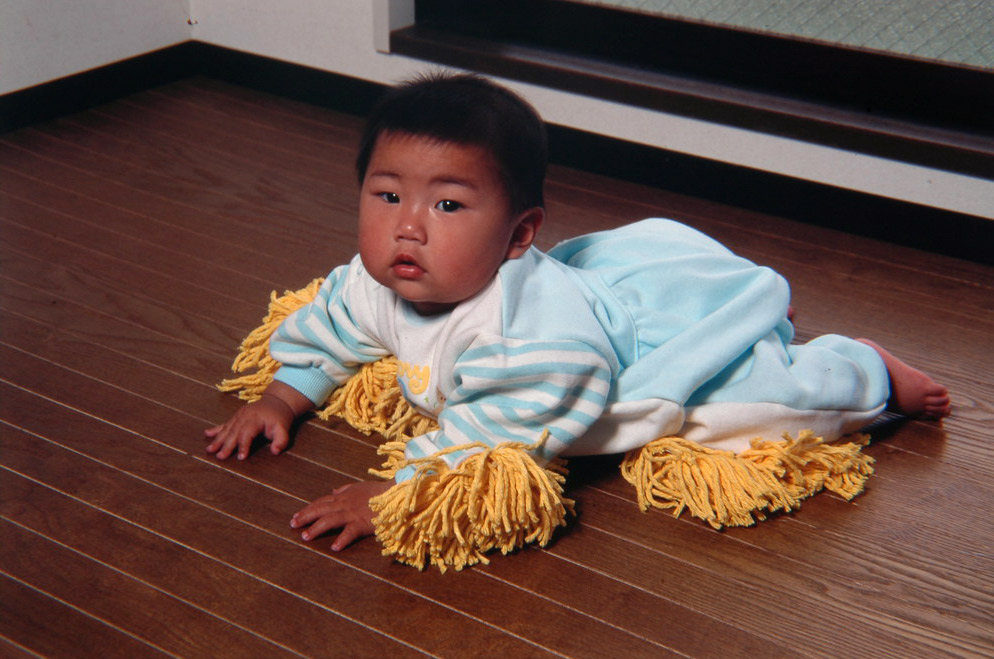 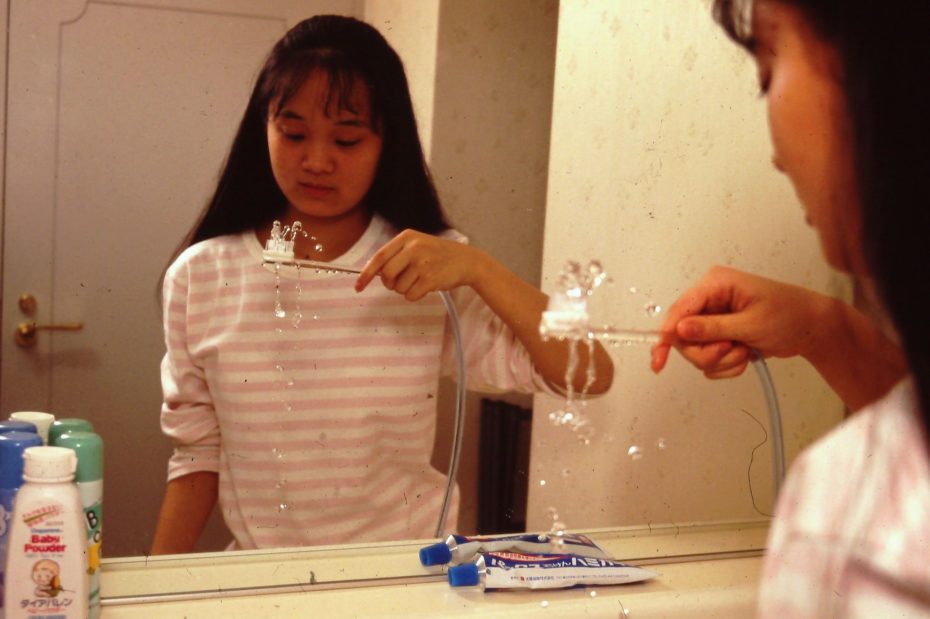 So yeah, they may be weird creations that look like junk – but what they actually are is a form of art (or perhaps anti-art) that begs you not to take it seriously. Back to that spirit of anarchy: “Chindogu are man-made objects that have broken free from the chains of usefulness. They represent freedom of thought and action: the freedom to challenge and suffocate historical dominance of conservative utility; the freedom to be (almost) useless.”

Some good old #CHINDOGU tricks for you why I wait for new work to come out ?

Finally a necktie that makes sense! (dry clean only)

CHIND?GU #1 Pillow hat for lazy days ?? for @hungermagazine Chind?gu (???) is the Japanese art of inventing ingenious everyday gadgets that, on the surface, seem like an ideal solution to a particular problem. However, chind?gu has a distinctive feature: anyone actually attempting to use one of these inventions would find that it causes so many new problems, or such significant social embarrassment, that effectively it has no utility whatsoever. PHOTOGRAPHER : @aleksandrakingo STYLIST : @natashakfreeman MODEL : @vita_kan MAKE UP : @erin_kristensen HAIR : @delphine_bonnet NAILS : @bangbangnails ART DIRECTOR : @gemfletcher SET DESIGN : @amy_friend SUPER AGENT : @angelawoodsagency CASTING : @bunterbear RETOUCHING : @studio.glossmarc

But plenty of people have come to love Chindogu, and contributed to the movement with their own strange inventions. A look at the #chindogu tag on Instagram reveals a wealth of recent creations (and a lot of love for the concept.)

Tomatan, the tomato-feeding robot for the runner. We’ll be impressed only when someone launches the accompanying fleet of flying drones carrying the vodka, celery and tobasco #TheChat #robots #Chind?gu #Japan #bloodymary #cocktails

In a our 24-hour news cycle era of looming climate change catastrophe, stranger-than-fiction political buffoonery and an ever-growing feeling that we’ve slipped into a parallel timeline, sometimes it’s nice to just embrace the absurd, revel in it, and maybe walk around with rolls of toilet paper attached to our heads.