Mattress stores are so omnipresent these days it’s become a real struggle for sleep shops to stand out from their stuffed, sprung & padded competition. 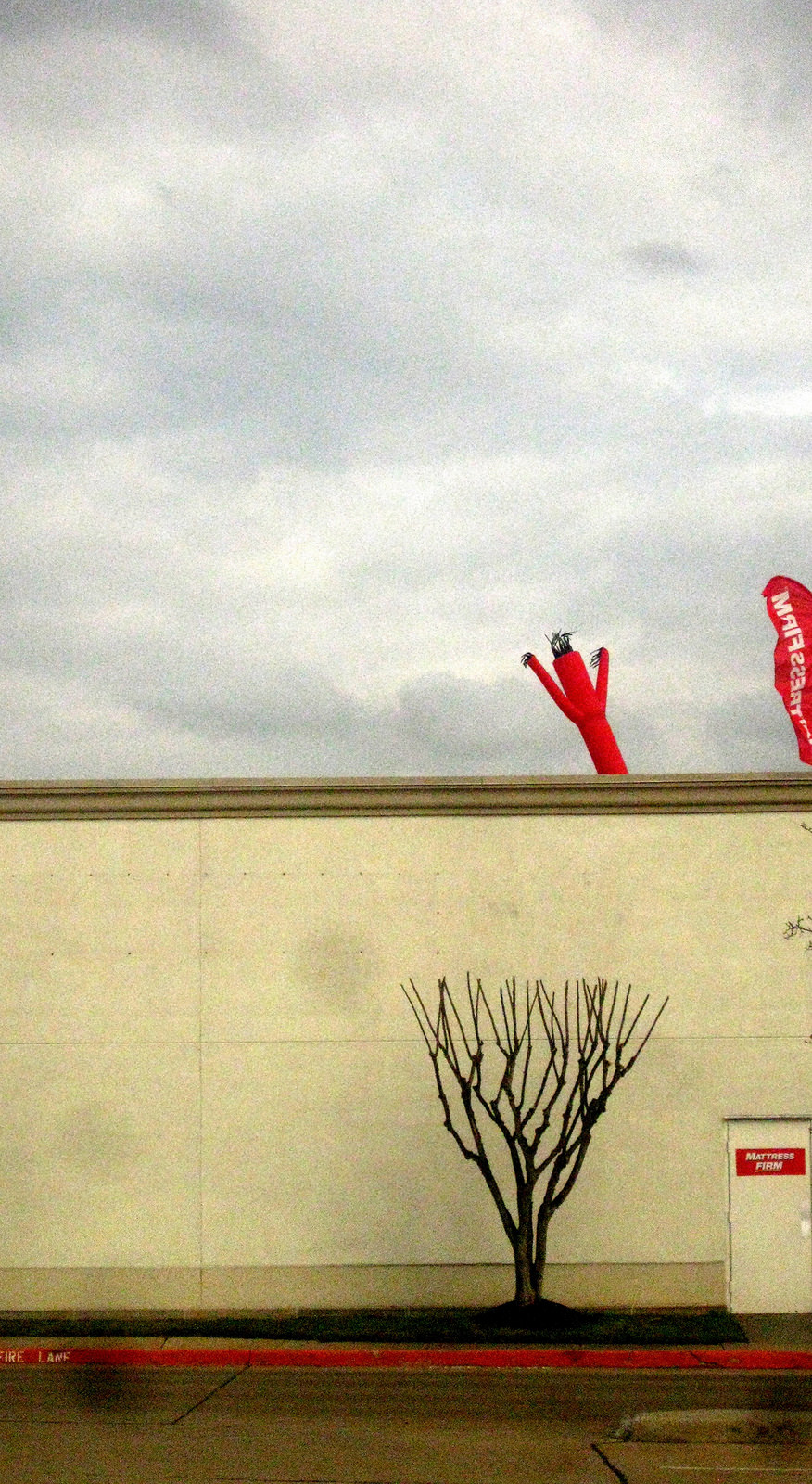 Mattress stores (along with dollar stores) are the rats and roaches of the retail apocalypse, spreading across the nation(s) under so many names it’s hard to keep track of them all. On the flip side, mattress store owners are doing their utmost to rise above the tide. Take Houston-based Mattress Firm, for instance. Flickr member revjdevans snapped a series of evocative photos that feature a red tube man advertising a store in Shreveport, Louisiana.

Ironically, since 2010 the City of Houston has banned tube men, stating their use “contributes to urban visual clutter and blight and adversely affects the aesthetic environment and the safety and quality of life for the community and the citizens of the city.” Sucks to be you, safe and aesthetic Houston. 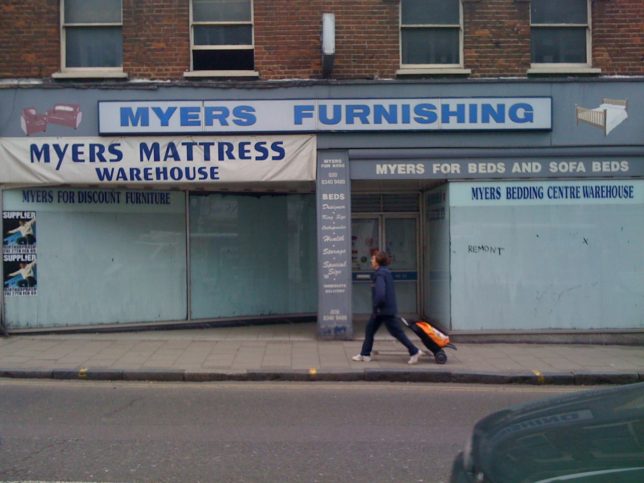 Is their life on Myers? More to the point, are there mattresses at Myers… and if so, WHICH Myers? No less than six Myers-centric sign legends look out from the otherwise subdued-looking store in Crouch End, London, UK. Flickr member gingerbeardman found himself “Myer’d” in mattress store heaven (or hell) in February of 2009.

The Gift of Good Nights 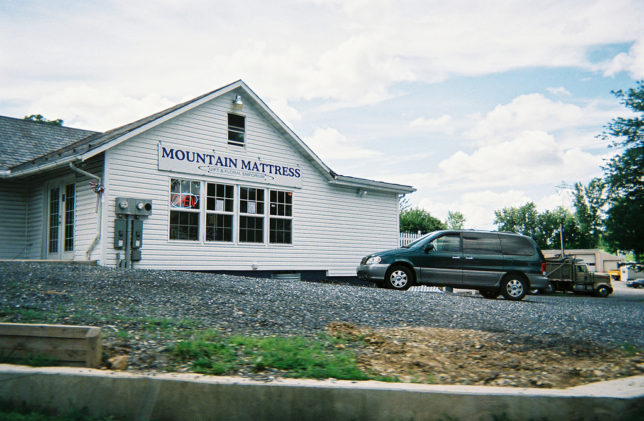 Most mattresses we’ve seen better resemble plains than mountains, though perhaps the former is a tad too “plain” to use for advertising purposes. Speaking of which, Mountain Mattress in central Appalachia has labeled itself as a “gift emporium”. Remind us to reference them next time a friend or family member gets hitched – they’ll never, ever forget your thoughtfulness. Kudos to Flickr member da_mere for reading the sign’s double-take-worthy subtext back in the summer of ’06. 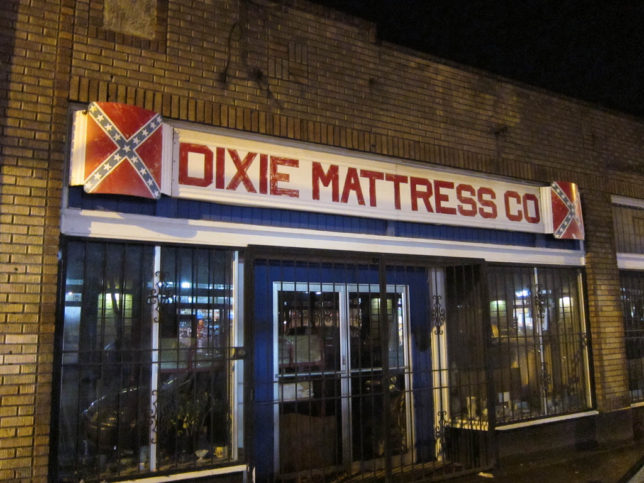 Southern sleepers will rise again… every morning, soon as the alarm goes off. And by “southern”, we mean southern Portland, Oregon, according to Scott Beale / Laughing Squid who posted the above photo at Flickr. Beale captured the incongruous (did any Civil War battles take place in Oregon?) mattress store in early 2010, though likely not without a fight. 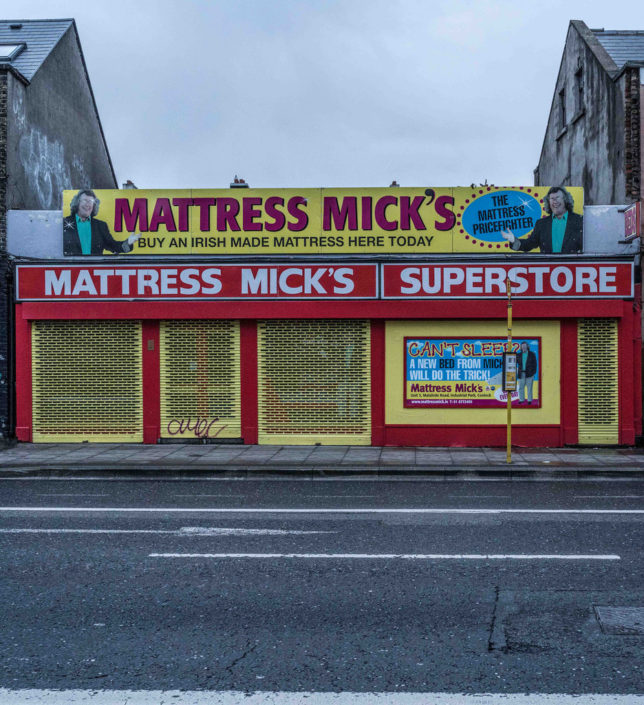 Ethnic humor ain’t what it used to be – not that we’re complaining – and these days only Canadians, Scots and the Irish are still fair game for stereotypical profiling. Problem? Not for “Mick” (if that’s really your name) of Mattress Mick’s Superstore in Coolock, Dublin. In related news, it would appear that mattresses are being made in Ireland, presumably stuffed with shamrocks and Lucky Charms marshmallows… NTTAWWT. Flickr member William Murphy photo-documented Mattress Mick’s garish storefront in early 2016.