Back in the grim days of The Great Recession, companies large and small laid off workers while discouraging new hires with a wealth of “no hiring” signs. 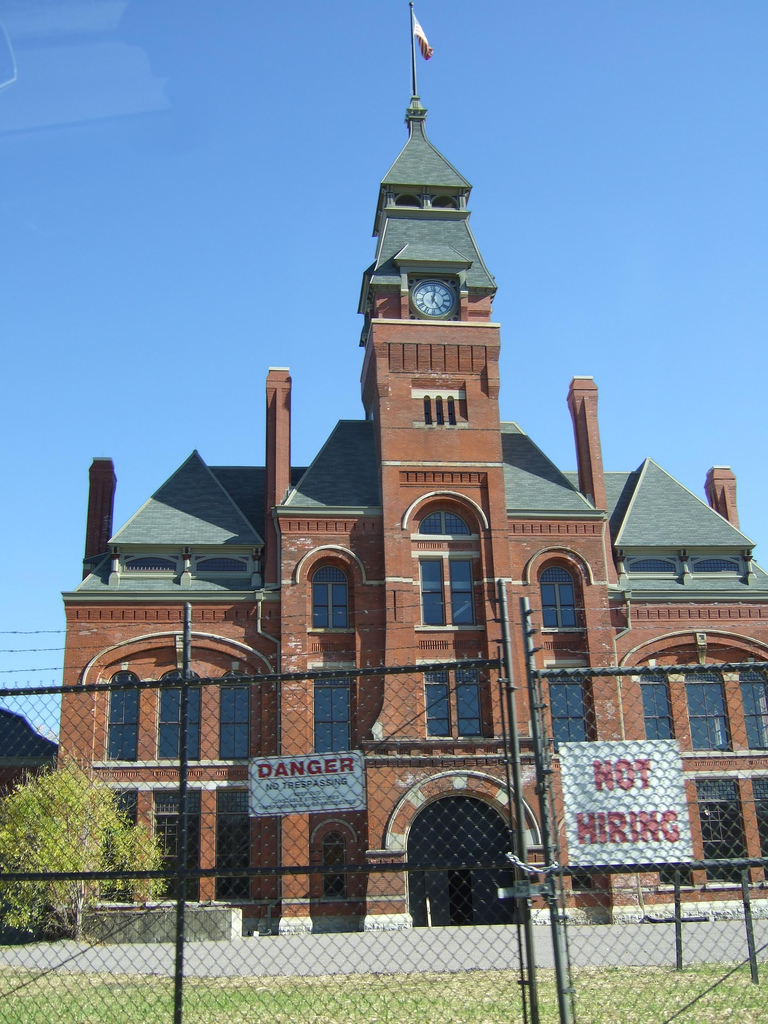 Historic Pullman, a former company town dating from the 1880s, is today one of Chicago’s 77 defined community areas. Though the South Side district has been a National Historic Landmark Site since 1969, renovation and rehabilitation of its buildings – including the former Pullman Clock Tower and Administration Building (now the Pullman National Monument Visitor Center) above – is an ongoing process, one that requires laborers… sometimes. 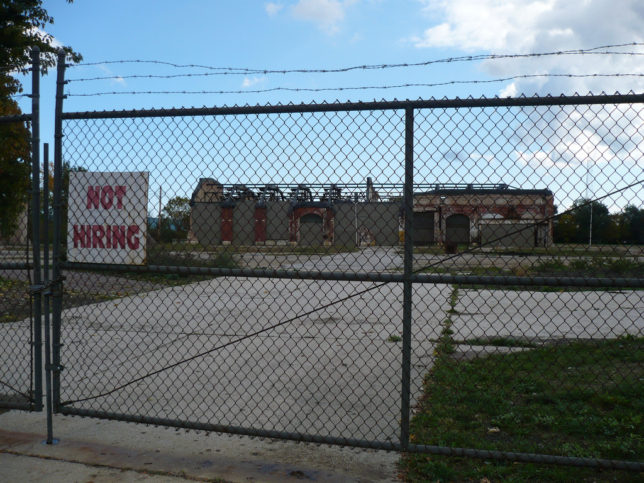 Construction work is typically one of the go-to manual labor options when times are tough. We’re assuming such jobs in the Pullman Historic District were snapped up quickly during late-2007 to mid-2009, when the above photos by Flickr members Bart Heird, crowbert, and Lynn Josse were taken. 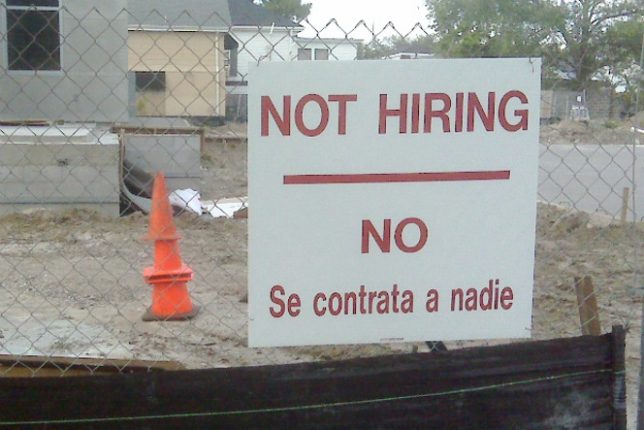 They thought “no hiring” was so nice, they had to say it twice! Well, not really, but you can’t blame English-speakers for just seeing the “NOT HIRING – NO” part and tuning out “Se contrata a nadie” (“Nobody is hired”). Flickr member Indiana Public Media/WFIU captured the above sign posted in front of a construction project in April of 2009. 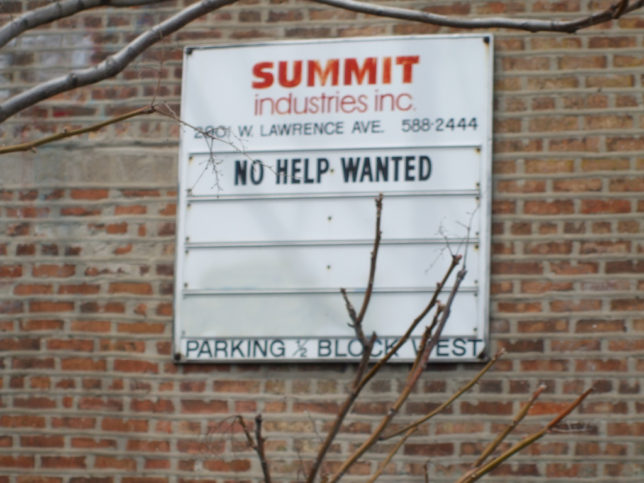 “NO HELP WANTED”, reads the sign posted at Summit Industries in September of 2007, to which Flickr member and photographer bluefishtuesday replied, “especially not yours” and “recession, much?” Times were tough all over back in The Great Recession but Chicago seems to have been hit especially hard – this photo was snapped on W Lawrence Ave in the Far North Side. 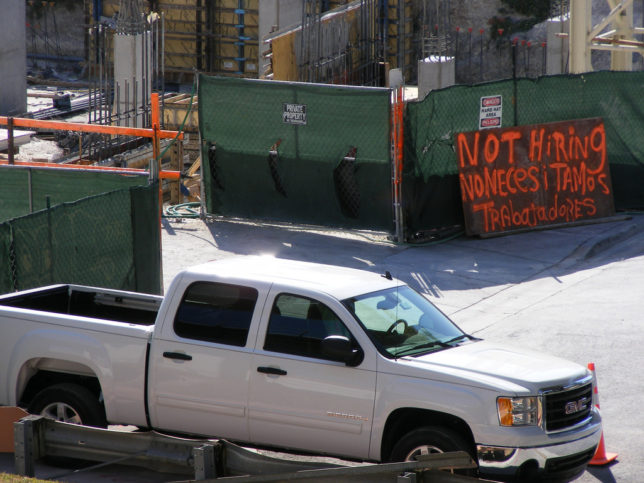 More construction, this time in Miami, FL where workers hopeful of employment were greeted by “NOT HIRING” and “No nececitamos trabatatores” (“We do not need workers”). Times must have been tough indeed: the company couldn’t even afford a pre-printed no-hiring sign… and you can bet somebody was charged for the orange spray paint. Flickr member R. Maas captured the above labor-unfriendly scene in March of 2009. 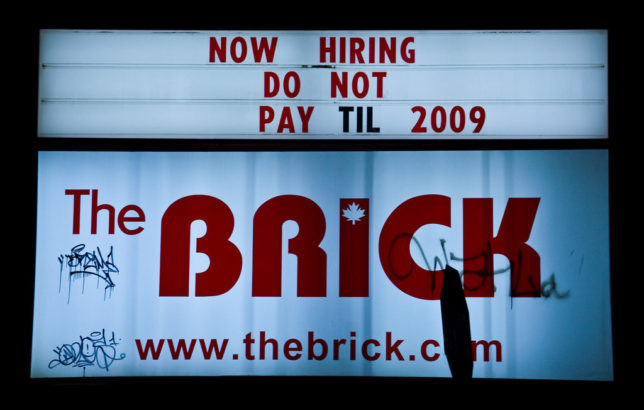 How to save money when hiring staff, Exhibit #42… brought to you by The Brick, a chain of Canadian furniture and home appliance stores. In 2007, Flickr member Alex Indigo snapped this sign that appears to tell prospective hires they won’t receive any financial compensation ’til 2009. We don’t know how many workers this store ended up hiring but we wouldn’t be surprised if at least one was fired. 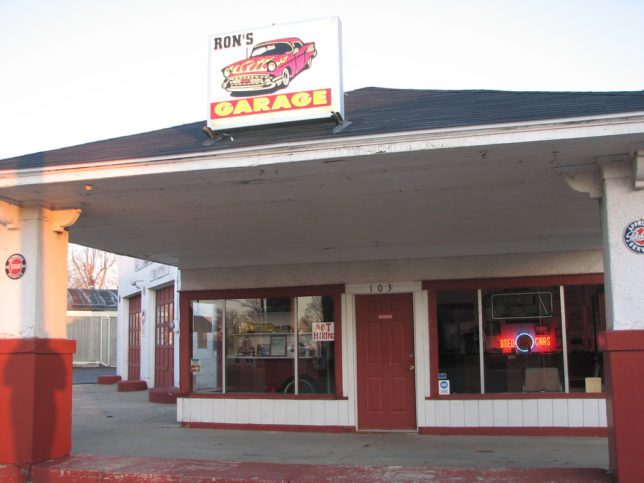 “Too many people looking for work. Don’t bother asking here,” stated Flickr member Kyle Harr about Ron’s Garage in Pewamo, MI. The eponymous “Ron” must have had unemployed workers pestering him day and night for a job, any job, even the thankless task of hanging “NOT HIRING” signs on multiple windows to deter job-seekers approaching from any direction. 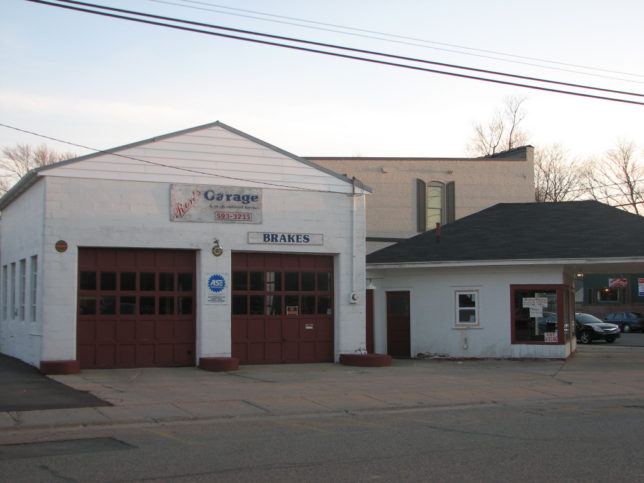 Speaking of signs of negativity, note that Ron’s also posts “NO PARKING”, “NO SOLICITING”, “Authorized STUDEBAKER Service” and “Approved PACKARD Service” signs. That might help to explain why the garage apparently conducts NO BUSINESS and thus, needs no staff. 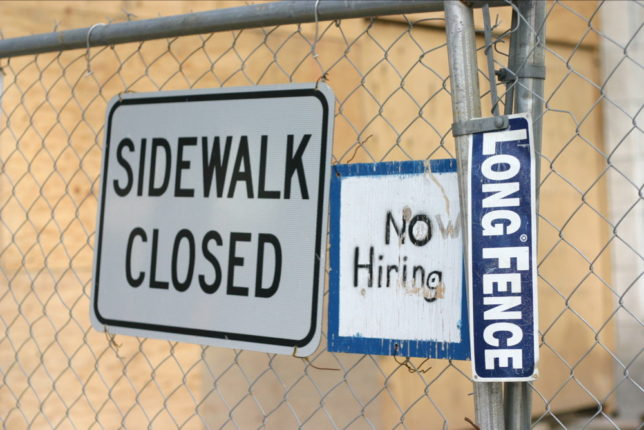 Flickr member Pak Gwei snapped this trio of fence-mounted signs in Washington D.C.’s Franklin McPherson Square back in March of 2007, mere weeks before the Subprime Mortgage Crisis sparked what would turn out to be the worst global economic contraction since the 1930s. Hope may always spring eternal but in the spring of ’07, the stage was being set for an epic fall. Note to the anonymous wiseguy who made an “adjustment” to the handmade “No Hiring” sign: much pain is about to ensue; you should have erased the “N” after adding the “W”.