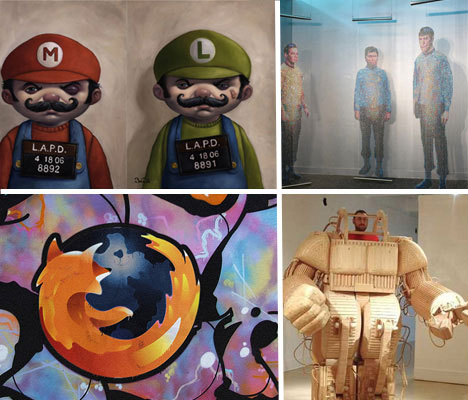 Geeky art comes in many forms, from paintings and sculpture to graffiti and tattoos. The subject matter can be anything from video game characters to complex math problems. In some cases, what makes the art geeky isn’t the subject – it’s the materials used to create the art, as in the case of a retrofuturistic motorcycle created entirely from used computer parts. One thing that each of these 20 examples of art have in common, though, is that they’re awesomely geeky. See also: 100+ Works of Creative and Geeky Art and Graffiti. 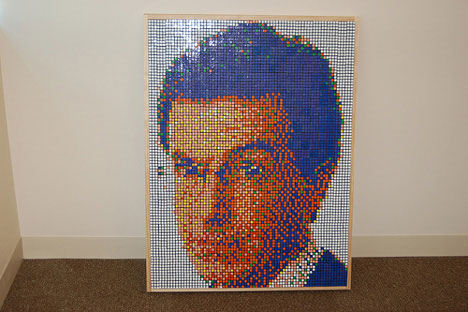 There’s nothing quite as geeky as a giant portrait of Stephen Colbert made of 768 Rubik’s cubes. Artist David Litwin says, “What does one do with 768 cubes once you’ve made your company logo? I spent way too much time getting them stickered properly to just leave it at that. No, you move on to doing other pictures. I had considered great works of art (Mona Lisa, etc.), but thought a tribute to Stephen Colbert would be more fun.” 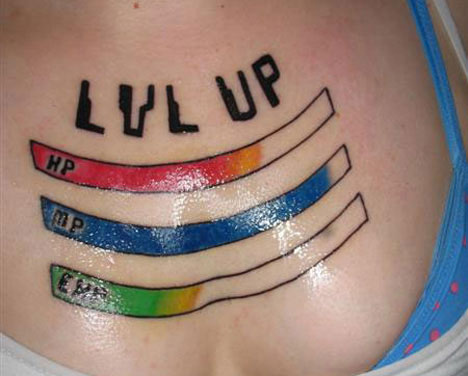 This tattoo adorns the chest of one “MC Router”, the “queen of nerdcore” The 22-year-old from Texas also has “geek life” tattooed across her knuckles. Nerdcore, in case you’re wondering, is a subgenre of hip hop characterized by themes relating to nerd life including Star Wars, computers and science. 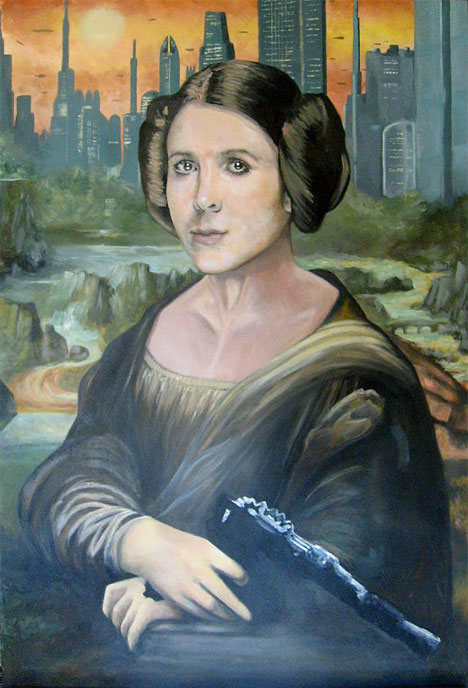 There have been literally thousands of interpretations of the Mona Lisa, but none that pay tribute to Princess Leia of Star Wars quite so artfully as this one. Artist Jim Hance said that as of late June he was still working on this painting, but it looks great to us already. 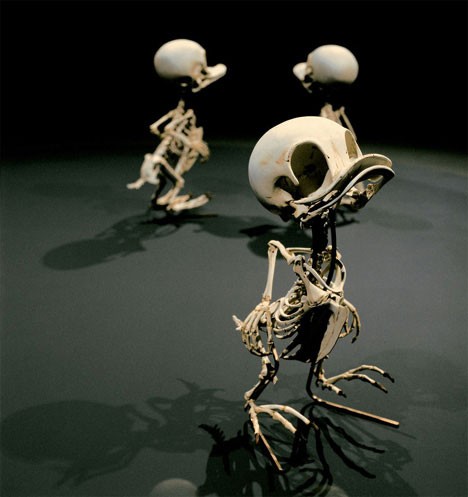 If you’ve ever wondered what the skeletons of cartoon characters like the Roadrunner, Tom & Jerry or Bugs Bunny look like, artist Hyung Koo Lee has created a series called “Animatus” that imagines exactly that. The sculptures are made from resin, aluminum, stainless steel wire, springs and oil paint. Pictured is “Anas Animatus”, which you may recognize as Dewey, Huey and Louie from “DuckTales“. 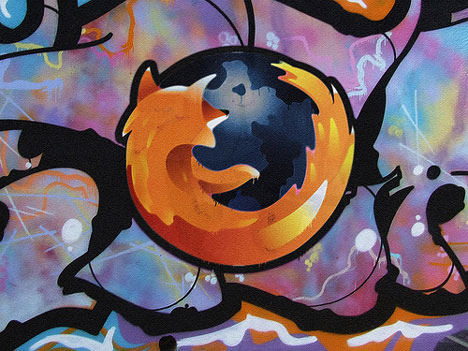 Paul the Wine Guy found this instance of Mozilla Firefox-inspired graffiti while working on his “IT everywhere” photo series. IT graffiti is getting more and more common, with everything from Microsoft references to pixelated hourglasses and cursors being spray painted on all manner of surfaces. 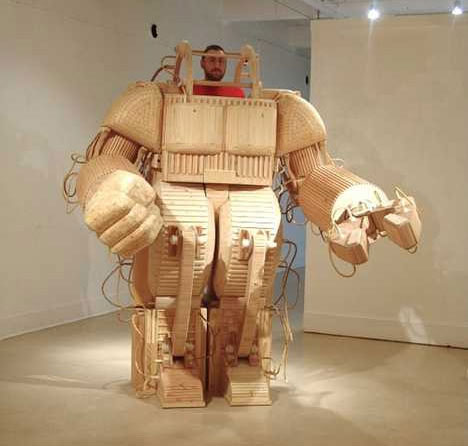 Mike Rea creates these awesomely weird sculptures including a space capsule, a time machine and this “Suit for Steven Hawking”. His sculptures are made primarily of wood with a little foam, rope and burlap thrown in here and there. Of his work, Mike says, “My goal is to create the idea of an object that remains a dream. The objects I create are based on fictions, rather than realities.” 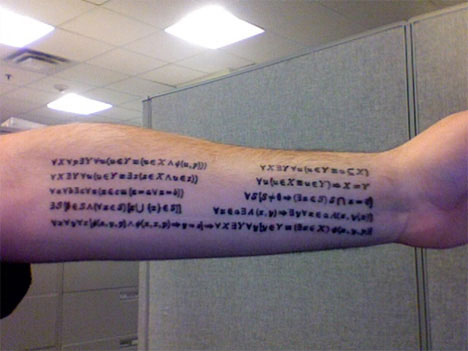 Mark, the proud owner of this math tattoo, wrote to Carl Zimmer’s Science Tattoo Emporium, “This tattoo is the Zermelo-Fraenkel with Choice axioms of set theory. These nine axioms are the basis for ZFC set theory, which is the most commonly studied form of set theory and the most well known set of axioms as well. From these nine axioms, one can derive all of mathematics. These provide the foundation of mathematics, a field that you can likely tell that I love dearly.” 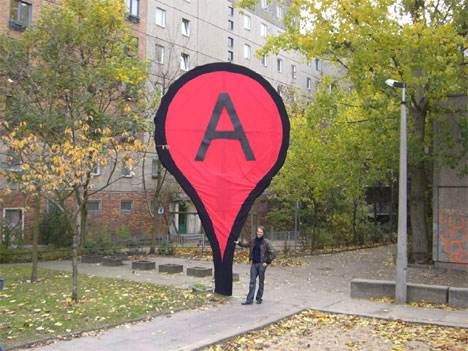 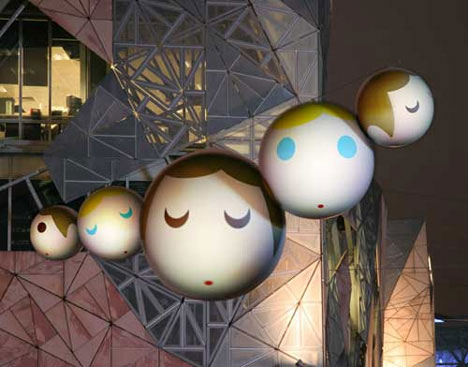 Pixiles are interactive digital sculptures that turn static objects into an “interactive illusion”. Virtual scenes are projected onto spheres on a mobile, which then move and seem to interact with each other and their environment. They respond to touch, body movements, sound and even wind blowing. The resulting holographic illusion makes it seem as though the objects are reacting to gravity and friction. 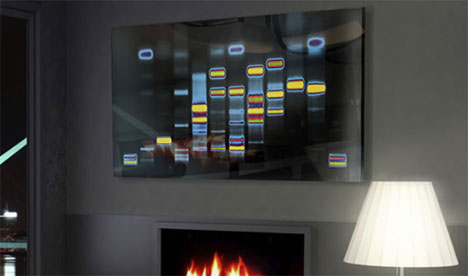 This is an example of “DNA Art”, a visualization of an individual’s DNA on canvas. Customers have their DNA swabbed and it’s then analyzed in a laboratory, and made visible through a special process involving special coloring matter and ultraviolet light. A special camera is then used to take a high-resolution photograph. DNA Art UK, which created the picture above, claims to use the .10% of DNA that makes each person unique to create their DNA art.