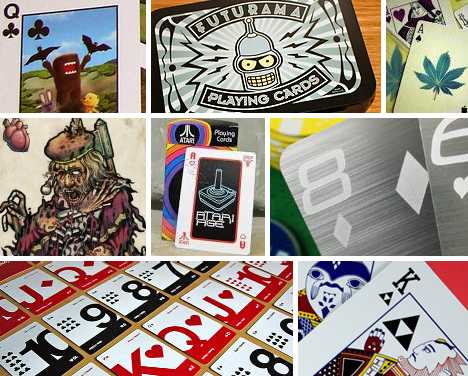 This baker’s dozen of geek-themed playing cards may be old school in concept but their sci-fi and Internet-savvy themes will suit most any game-lovin’ fanboy. 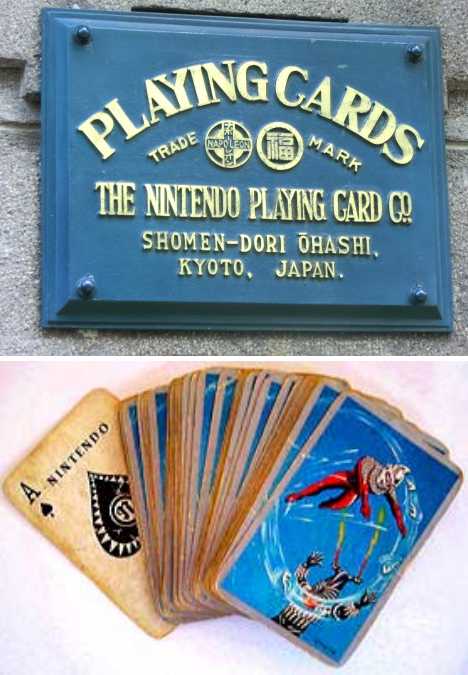 (images via: Jyunkissa-Sakuraba and Odai)

What does Nintendo, famed for Mario, the NES and the Wii have to do with primitive paper playing cards? Quite a lot, as it turns out. Originally incorporated as the Nintendo Playing Card Company on September 23rd of 1889, the firm changed its name to the more generic Nintendo Co., Ltd. in 1963 but never forgot its card-making roots. The vintage deck above is evocative, predictive, futuristic… and awesome! 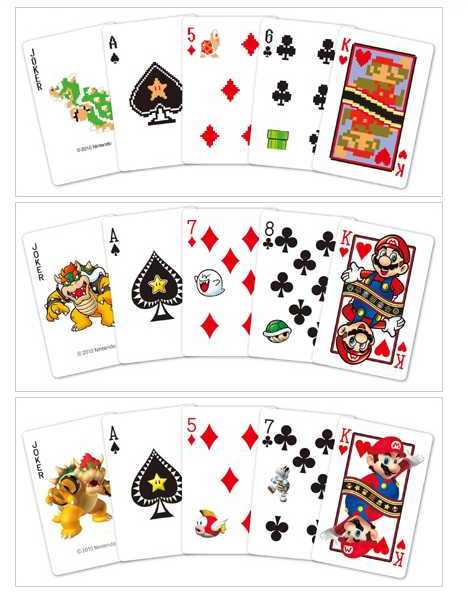 What’s old is new again, and Nintendo has come full circle after over a century in business. In 2010, the company announced a series of three Mario-themed playing card decks: one with a standard red back, another with a black “neon” back and a third featuring 8-bit renderings of the suits, numerals and face cards. 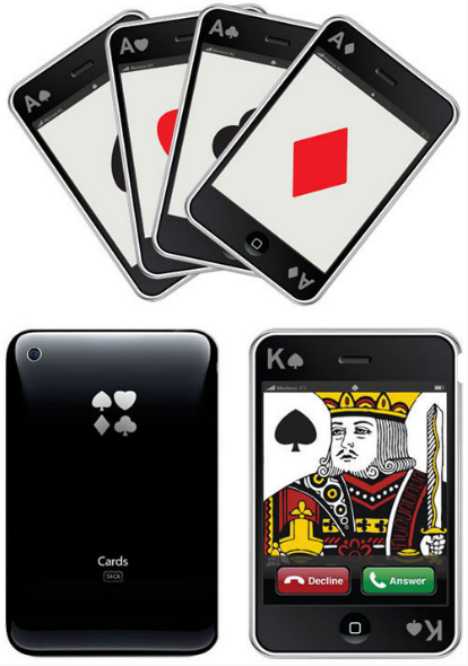 (images via: Gearfuse and Meninos)

If smartphones get any thinner, they’ll be hard to tell apart from credit cards or, you guessed it, playing cards. Since arguably the most well-known smartphone on the planet is Apple’s iconic iPhone, that’s what the makers of this otherwise regulation deck have used for their design inspiration. One imagines a poker game played with an iPhone deck would feature few raises but a whole lotta calling! 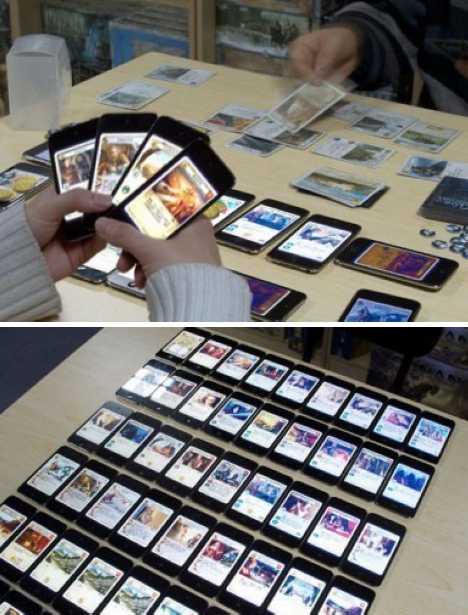 So, playing poker with iPhone playing cards makes you a geek, huh? Chinese fanboys can only look on and laugh as they wheel & deal with actual smartphones! Granted, knockoff mobile phones are both cheap and plentiful in China but there’s such a thing as laying it on a bit too, er, thick. 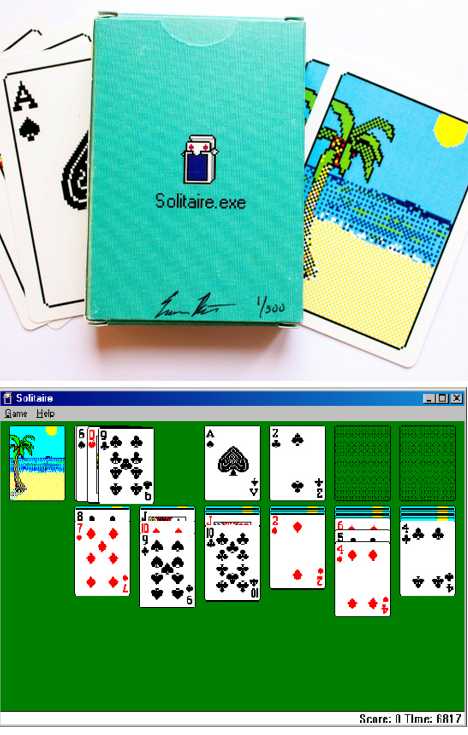 (images via: Rocketnews24 and Kotaku)

In the fading years of the 20th century it seemed a host of familiar pastimes were being adapted for use on our newfangled desktop PCs. That was a good thing: try hiding an analog game of Solitaire from your overly inquisitive, pointy-haired boss. Let’s all thank Bill Gates, then, for bundling Solitaire.exe with Windows 98 and therefore allowing us to collectively crash workplace productivity to historic lows. 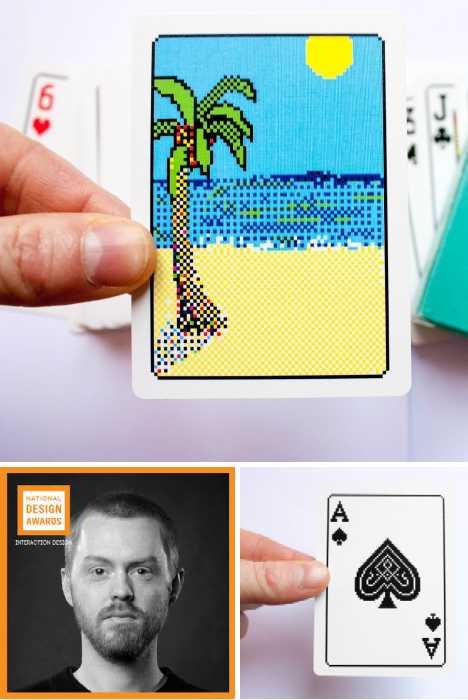 Since Windows 98 and its well-loved games have long since faded from our screens, so-called “interaction designer” Evan Roth (above, lower left) has taken it upon himself to re-imagine Solitaire.exe as an actual deck of playing cards. Produced in a numbered limited edition of 500, the decks sold out quickly based on nostalgia, geek-chic and pure unadulterated “whoa!” factor. 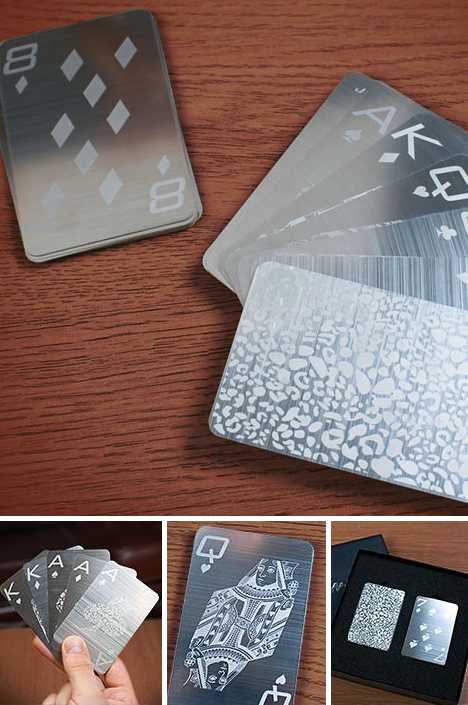 (images via: Geekalerts and Firebox)

In Soviet Russia, deck cut you! Sorry, couldn’t resist, and YOU won’t be able to resist the allure of these heavy metal playing cards made from real metal: stainless steel, to be exact. Forget about paper cuts, you could slice a t-bone steak with one of these bad boys. Oh, and they’re heavy indeed: the deck of 54 standard-sized cards tips the scale at a whopping 624 grams or just under a pound & a half. 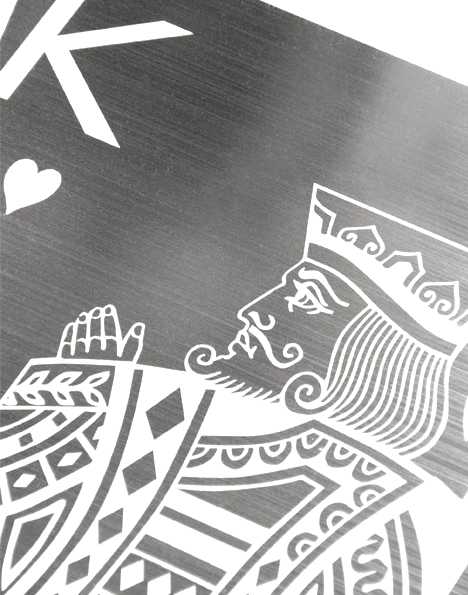 Sold for the exchange-rate converted price of roughly $140 per pack, these “sharp cards for card sharps” are meticulously etched on both sides and come in a natty black needle cord box. Old double-0-7 James Bond himself would appreciate this deck – when not used for playing, they make handy rectangular shurikens. 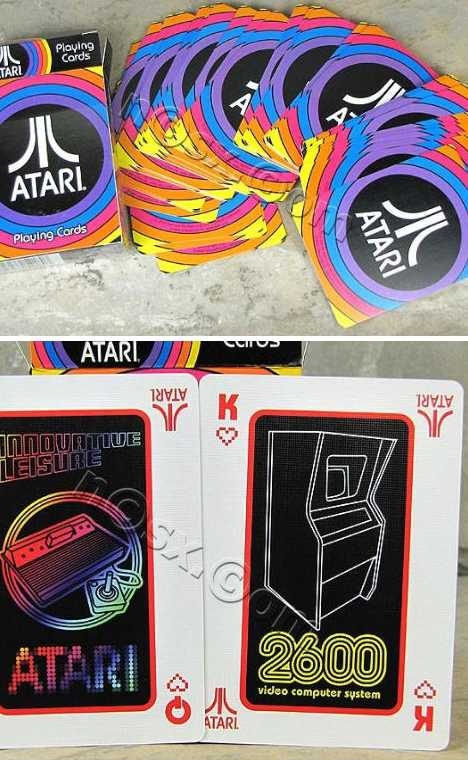 In the early Eighties it seemed video games were going to drive their non-digital counterparts to extinction. Thirty years later, pioneering game and console manufacturer Atari is long gone and playing cards are doing just fine, thank you. This deck of Atari Playing Cards from Aquarius rub salt in the wound by displaying the company’s retro-video iconography on both sides of each and every card. 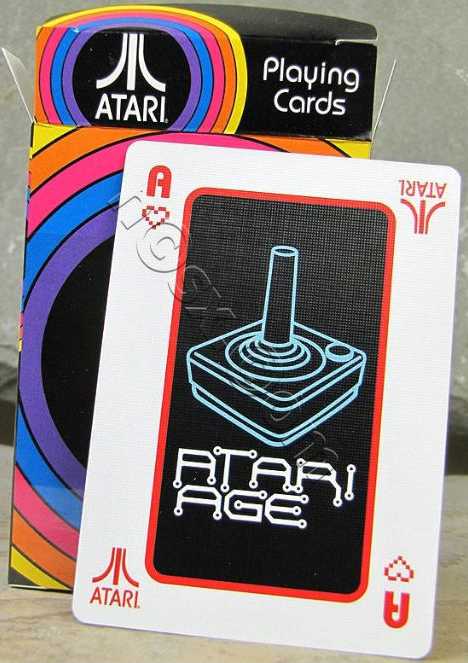 Though the deck is regulation in size and number of cards, efforts have been made to go beyond the basic decorative back to make these cards Atari through and through. Take the suits, for instance: instead of Diamonds, Hearts, Spades and Clubs, the Atari Deck features graphics from arcade games Breakout, Asteroids, Centipede and Millipede. 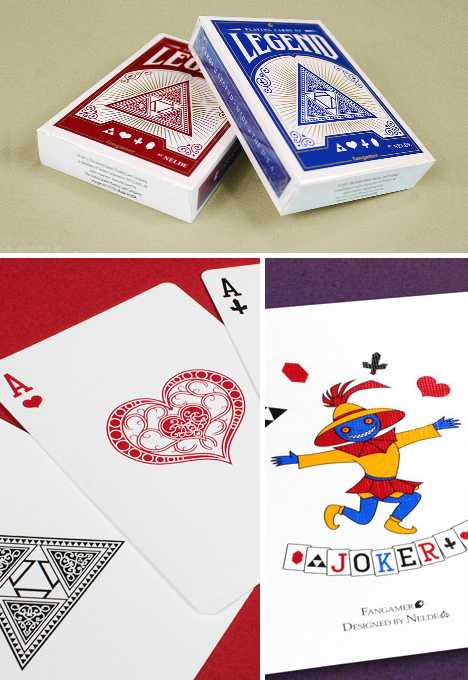 If you can’t beat ’em, join ’em? This sleek, sweet deck of Legend of Zelda theme poker cards looks about as professional as you can get. 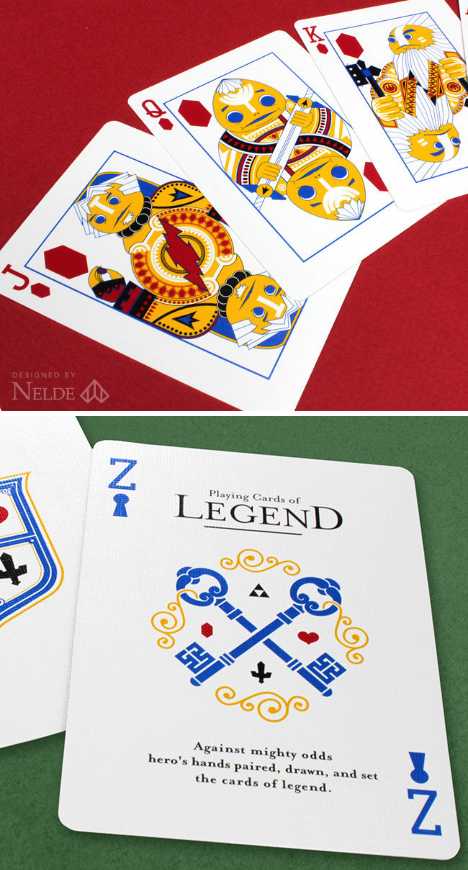 (images via: Wikipedia, Amazon.com and AnimeZ)

Who or what is a “Domo”? Long before he became an internet star, Domo-kun was (and still is) the official mascot of NHK, Japan’s government-owned TV station. Domo’s come a long way since his 1998 debut, however, having been adopted by netizens worldwide following his 2002 incorporation into the “God kills a kitten” image meme on FARK.com. Looks like Domo’s playing his cards right and now you can do the same with Domo Playing Cards. 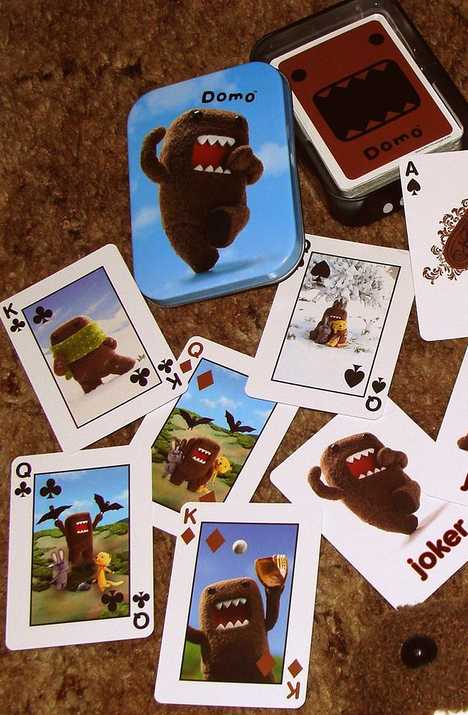 Featuring scenes of Domo at work, rest and play (though not chasing kittens), the Domo Deck displays stylized hand-drawn text and numerals that give it an almost child-like vibe quite at odds with the meme’s origins. The deck is regulation sized, however, so they can be used to play the usual card games and maybe a few unusual ones, such as “Master of Your Domain”.

Deck of the Dead 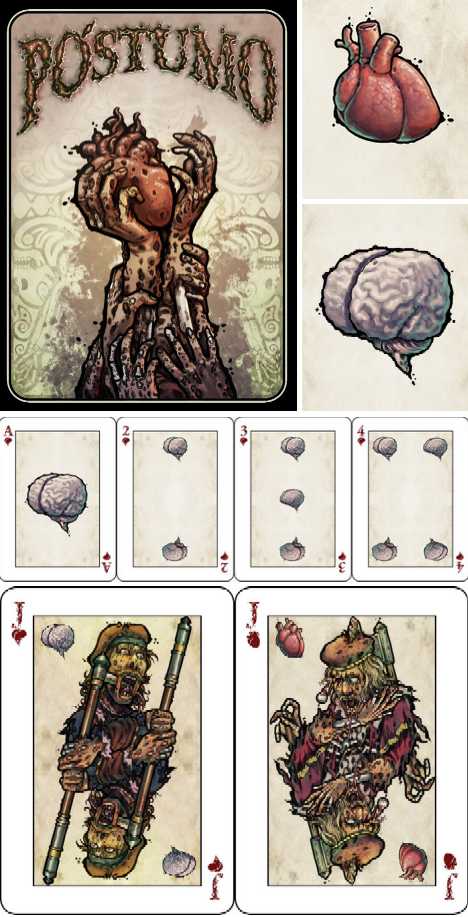 Darren J. Gendron‘s “Póstumo – The Deck of the Dead USPC-Printed Playing Cards” is a Kickstarter project one hopes achieves its goal. Why? Because OMG ZOMBIES!!1!, that’s why. 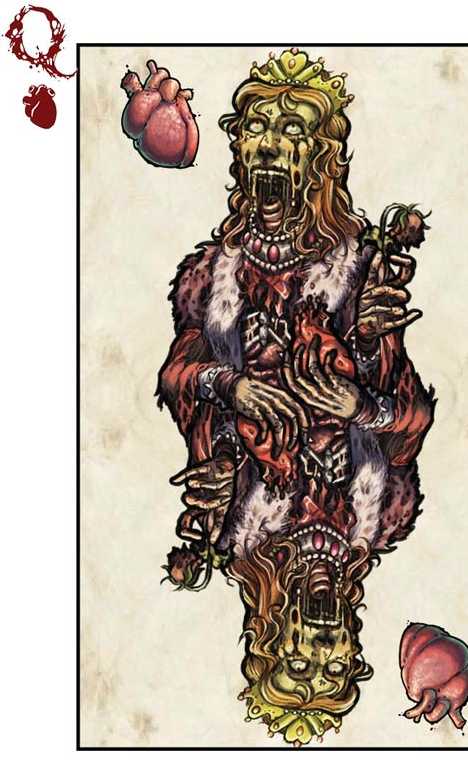 Equal parts grotesque, gory and gruesome, this zombie-inspired deck of playing cards features startlingly vivid custom illustrations penned by Obsidian Abnormal. Printed on Bicycle-grade card stock with USPC printing, the deck’s suits are Hearts, Clubs, Spades and… Brains. The Hearts, by the way, are anatomically correct. Gendron’s funding drive ends on November 29th so pony up now to ensure Póstumo – The Deck of the Dead isn’t dead on arrival. 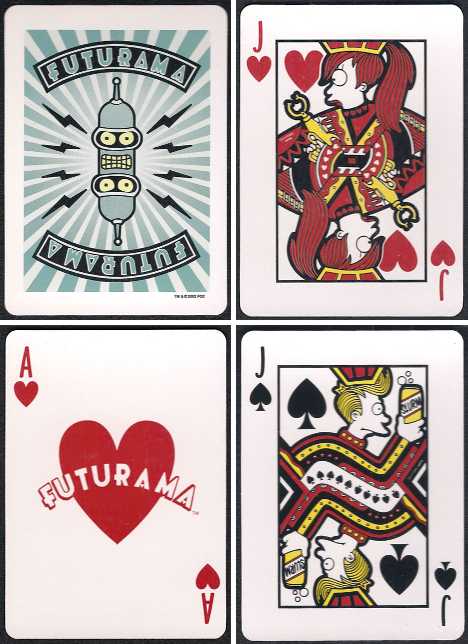 Think folks’ll still be playing cards in the year 3000? Good news, everyone, if the world of Futurama is any indication they certainly will – and suicide booths are available should you gamble away your last Nixon $300 bill. Now you can get a jump on The World Of Tomorrow with the Futurama Playing Card Deck. 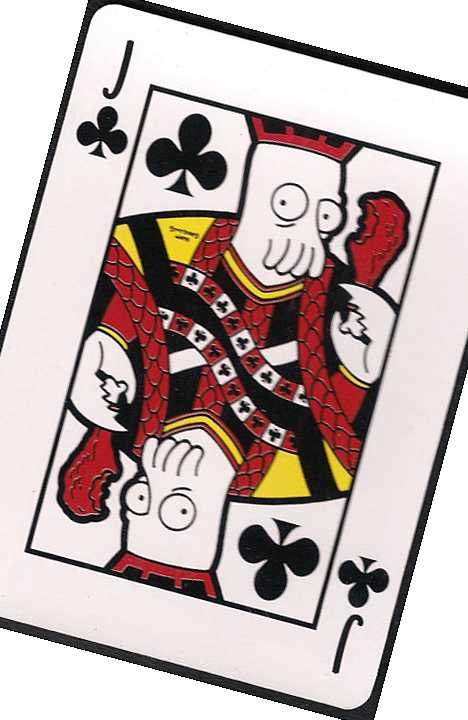 There are several Futurama-themed card decks out there but this particular deck claims bragging rights for its knowledgeably detailed face cards. The gang’s all here including Lrrr, Morbo, Mom, even Coilette from the Grand Duchy of Robonia. Best yet, the deck comes packed in a can of Slurm… using the cards is probably just as addictive as the drink. 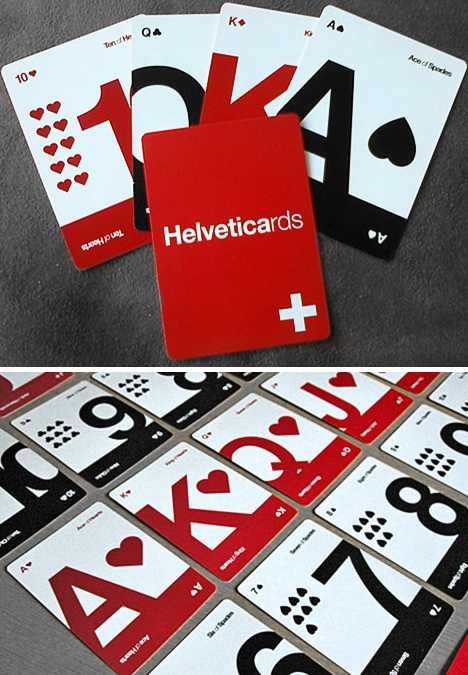 There are geeky fonts and there are font geeks who appreciate them, so why not font playing cards? Helveticards were “designed with both the typophile and card player in mind” by Tennessee designer Ryan Myers as a new, modern approach to traditional playing cards. 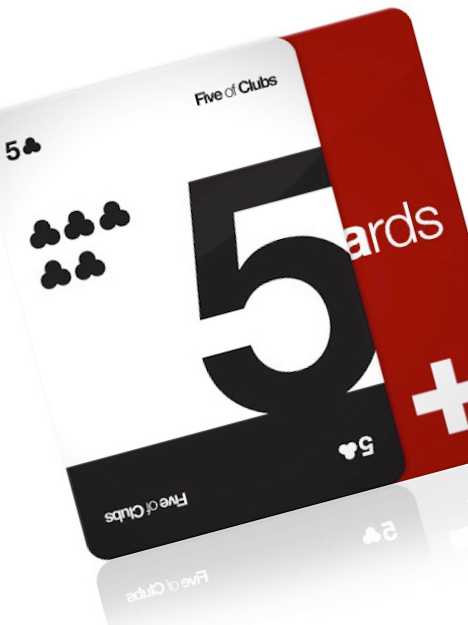 Like your fonts sans serif? Then you’ll love Helveticards – even the suits (Clubs and Spades, at least) are serif-free. In addition, each card has its name spelled out in type with their numeral rendered much larger than life size. Myers has gone beyond the design stage and has actually produced Helveticards for retail sale. They’re priced at $10 per pack and can be ordered online from Myers’ website.

(images via: The Mashable and Kickstarter/Raymond Thomas) 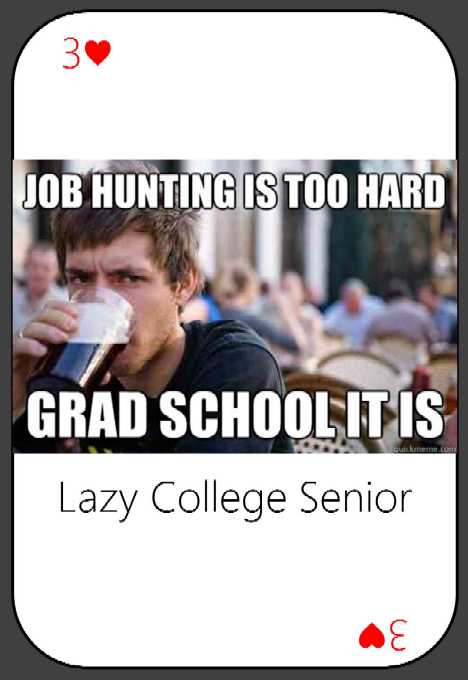 Ray Thomas of Seattle conceived Internet Meme Playing Cards as a way to expand the concept of the meme from the virtual to the real world. In order to achieve this worthy dream, Thomas has instigated a Kickstarter project to crowdfund the deck’s design and manufacturing. 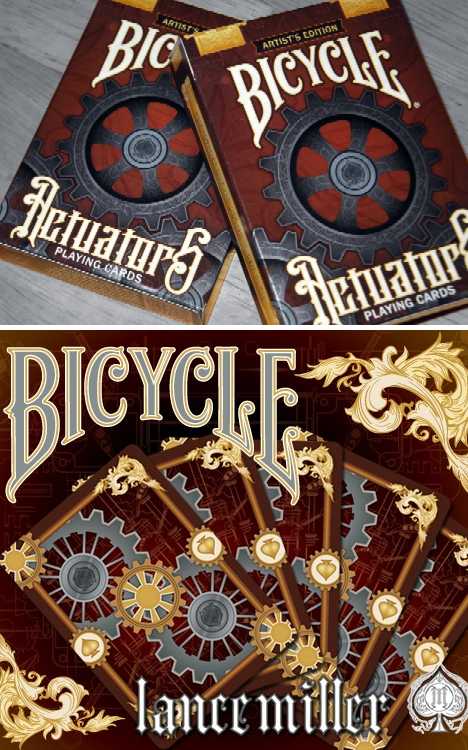 Has the whole Steampunk thing jumped the shark? It may not matter, because when you’re involved in a fierce game of Go Fish it’s the cards that call the shots. Steampunk Playing Cards were designed by Lance Miller and they’re manufactured by USPCC (the Bicycle people) so you know they’re well-made. 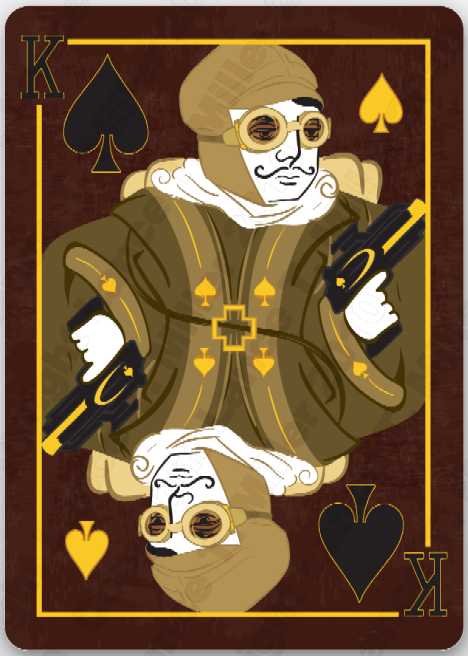 Displaying Miller’s original and quite beautiful artwork, Actuators Steampunk Playing Cards offer users a satisfyingly retro visual experience original inhabitants of the Brass Age would cherish. Modern manufacturing processes result in delightful depth of field replete with antiqued imagery from a world that might have been. Draw a Royal Flush with these cards and the ghost of Kaiser Wilhelm will nod sagely in approval. 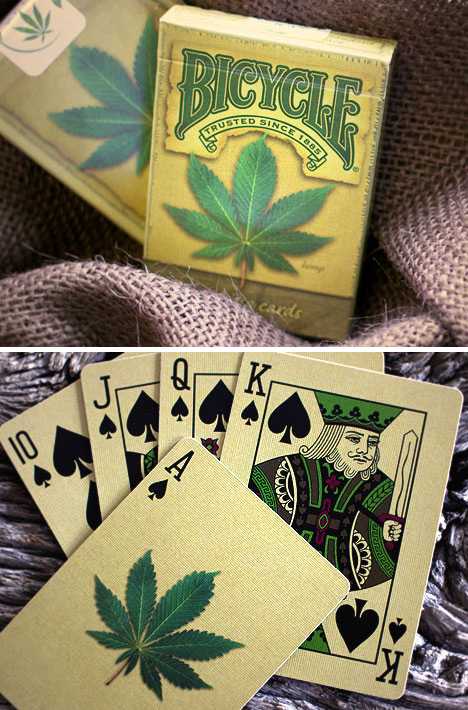 It may not be what most folks expect from Bicycle, an all-American business (est. 1885) that’s survived and thrived making the same basic product for over a century. The times, they are a-changin’ however and what’s blowin’ in the wind isn’t what a glance at the Bicycle Hemp Deck might lead one to believe. The deck isn’t a novelty either though it IS one of Bicycle’s newest decks. 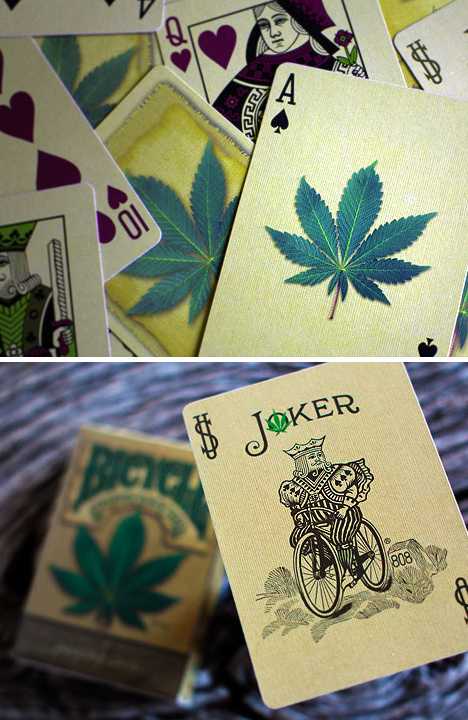 Bicycle knows fibers, and hemp fiber has a number of advantages over ordinary card stock: it’s environmentally friendly, durable, and resistant to UV rays. All that aside, Bicycle’s had some fun distinguishing the Hemp Deck from its brethren. Notable features include a burlap-look case, hemp-leaf imagery on the card backs, the Joker and the Ace of Spades, and the “liberal” use of grass-green coloring to highlight the court cards. Dealing in hemp suddenly got a lot more legal. 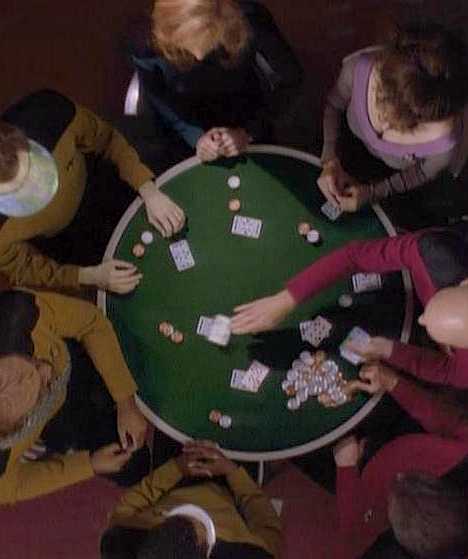 Playing cards figure prominently in the geek universe – the final episode of Star Trek: The Next Generation featured the main cast members plus (for the first time) Captain Picard enjoying a game of poker. It’s not known exactly what kind of cards Data’s dealing but one thing we do know: “the sky’s the limit.”