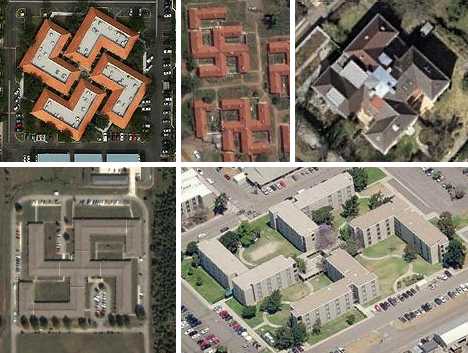 Swastikas are ancient symbols of positivity tarnished by a negative recent past, which explains why modern architects have generally avoided employing the hooked cross design in their blueprints. With that said, a little digging turns up more than a few swastika-shaped buildings – some where one might expect to find them, others most definitely not. 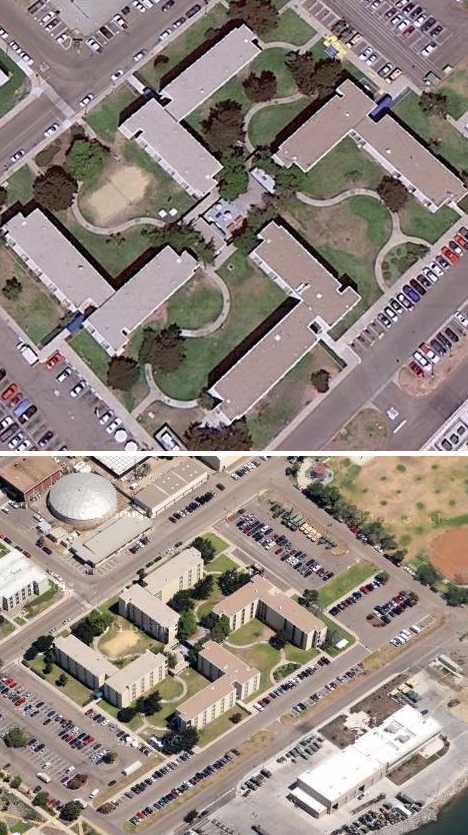 (images via: Si1very and Google Sightseeing)

The United States Navy’s Naval Air Station North Island in Coronado, California was established in 1917 and during the Second World War it was the main naval base supporting the war effort in the Pacific. Post-war construction at the base salutes the American armed force’s victories with streets named “Tulagi” and “Guadalcanal” to name just a couple. Though nobody’s admitting it, commemorative construction may have moved beyond roadways and into the base’s buildings. 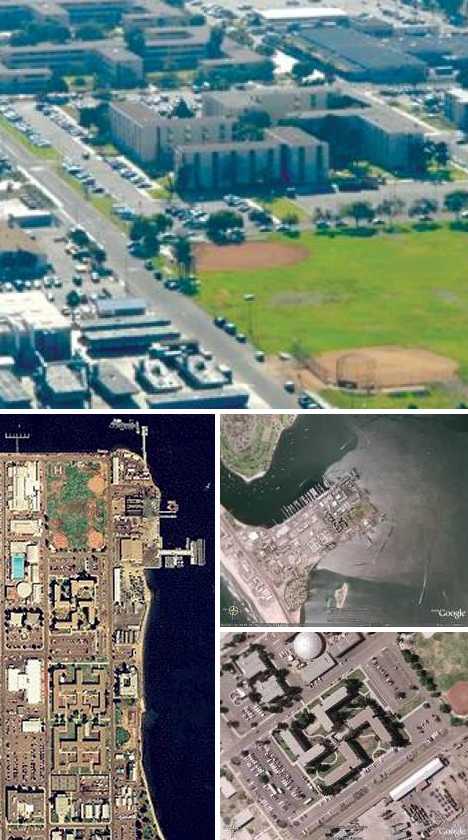 The buildings in question are a six-building complex currently occupied (according to a USN Public Affairs Officer) by the U.S. Navy’s Amphibious Construction Battalion 1 (the Seabees). Originally designed by John Mock of Hendrick & Mock Architects in the late 1960’s, the Navy’s original specs called for “a boiler plant and a recreation room; and a single ‘L’-shaped 3-story barracks.” The plan was then amended to have the dormitory building “be repeated three times and placed at 90-degree angles to the central buildings.” It was only after ground was broken on the project that the Navy realized what shape the complex would display when seen by the air but as very few people overflew Naval Air Station North Island in the early 1970s, figured it wasn’t a big deal. 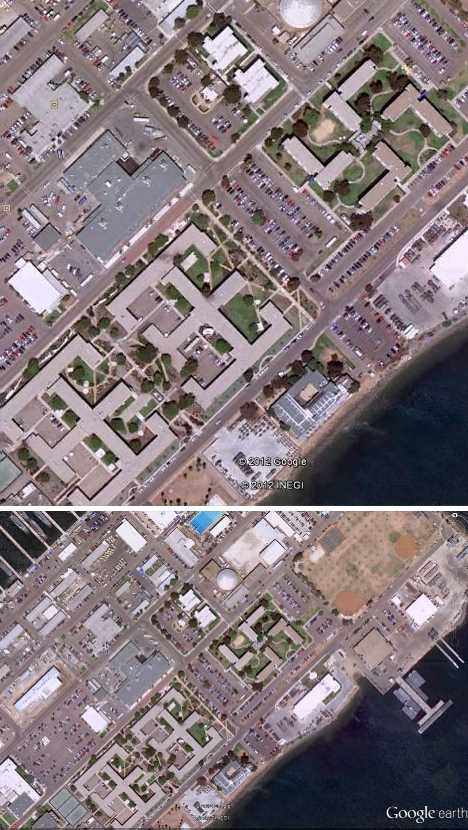 (images via: About Facts)

Which it wasn’t, for decades, until the Internet and Google Earth allowed anyone and everyone to enjoy birds-eye views of anywhere and everywhere… and some folks did NOT enjoy what they viewed at the Navy’s Coronado barracks. The cost of adding additional landscaping and associated construction to camouflage the barracks’ shape has been pegged at $600,000 though a, er, final solution to the matter has yet to be implemented. Curiously, a pair of buildings just beside the barracks appear to be modeled after World War II-era bombers flying directly at the “swastika” (the other side of which sits an empty baseball field) though neither the Navy nor the architects will confirm this. 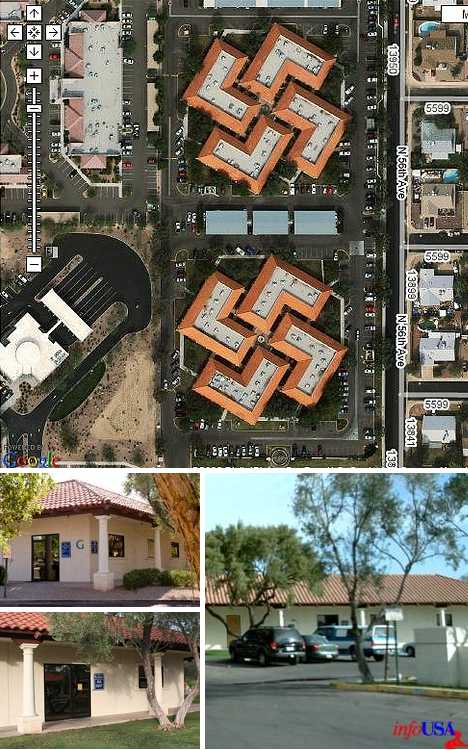 Located just north of Thunderbird Hospital on W Thunderbird Rd west of 56th Ave. in Glendale, Arizona you’ll find the Thunderbird Internal Medicine building and its doppelganger to the south, the Oakeson Physical Therapy building. Known together as “The Fountains”, the buildings house a number of small to mid-sized doctor’s offices, labs and diagnostic facilities. The low-lying, nested cluster of buildings feature coppery-red terracotta tiled roofs and exhibit a blueprint more like a child’s pinwheel than a classic swastika. The coordinates of the buildings on Google Earth are 33.36.48.96 N by 112.10.43.02 W. 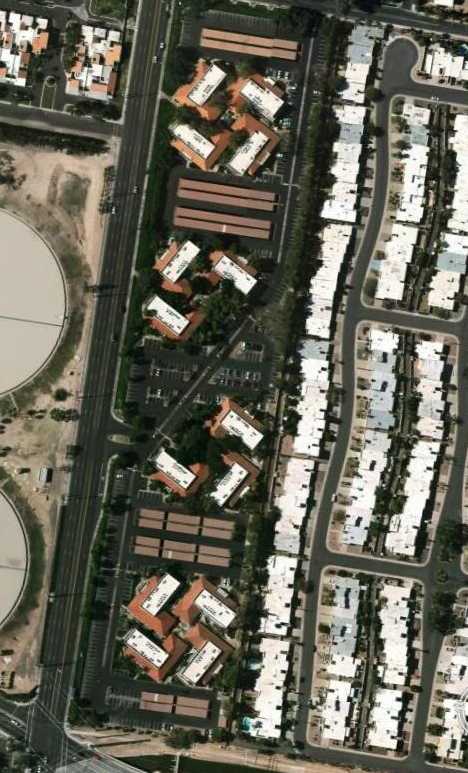 Curiously, another group of 4 buildings (probably by the same architect) is situated relatively nearby at 33.28.50.87 N by 111.56.45.60 W. The two buildings at either end of the row display a full swastika/pinwheel plan while the inner pair display 3/4 crosses only. What’s up with metro Phoenix and swastika-shaped buildings? Like many such designs, structuring these buildings in a swirled cross design optimizes the exterior wall area to allow for a maximum number of outward-facing windows. While visually pleasing for those working there, the plan also eases the need for air conditioning, an important factor when planning architecture in the desert southwest. 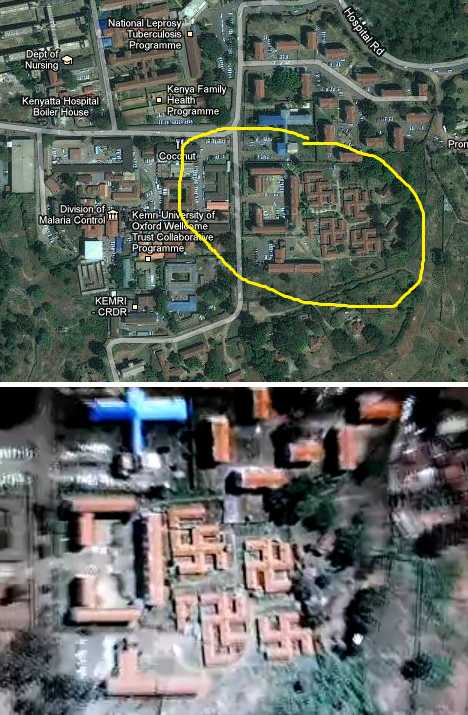 Located on the grounds of Kenyatta National Hospital in Nairobi, Kenya, is an “estate” of four low buildings that from the air display swastika floorplans. Two of the buildings are oriented in the traditional counterclockwise direction as employed for several thousand years by cultures as disparate as India’s ancient Sanskrit-speaking Indus Valley Civilization and the Native American tribes of the American desert southwest. 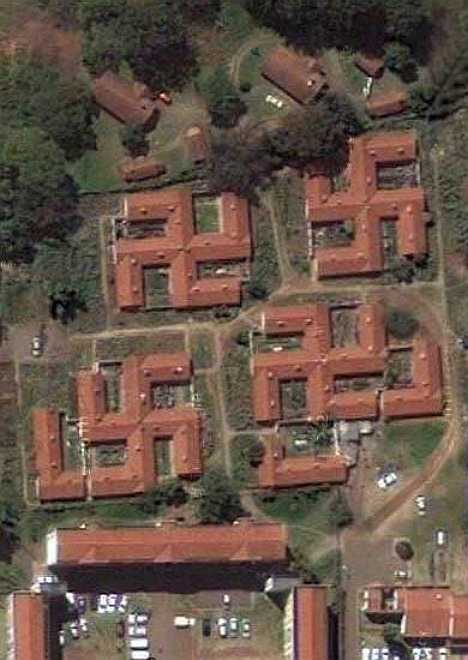 Another two buildings on the hospital grounds are laid out in the clockwise (right-facing) direction similar to the swastika design adopted by Germany’s Nazi Party in 1920. As far as the Kenya buildings are concerned, it’s estimated they house nurses who work at the Kenyatta National Hospital and/or its associated buildings such as the Kemri University of Oxford Wellcome Trust Collaborative Programme offices just across the street.