Science, technology, engineering and mathematics rarely get more delicious than this, illustrated and replicated in the form of solid chocolate, sugar crystals, fondant icing, pancakes and even bagels. Wouldn’t you want to take a bite out of an anatomically correct life-sized human skull, a 3D representation of kinetic movement, a Rubik’s cube, a Hubble Telescope photo or gory veterinary surgery in cake form? 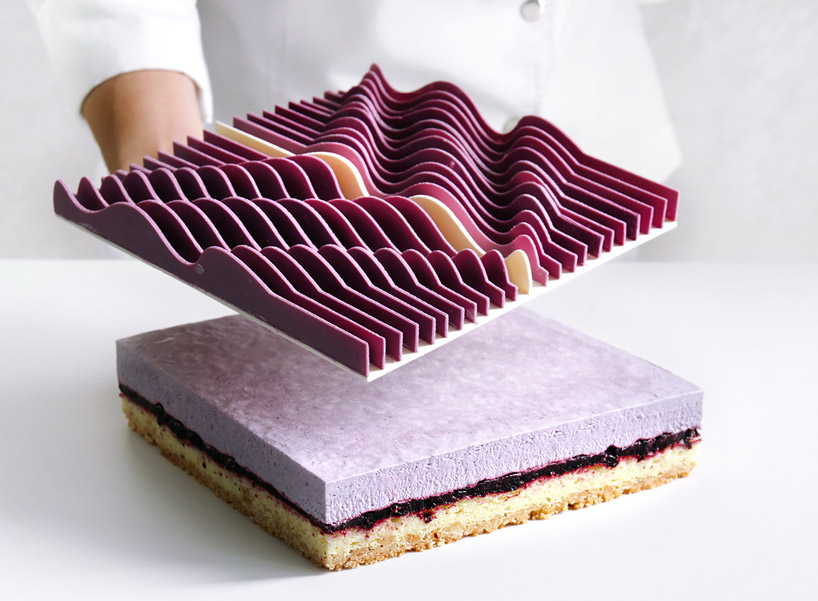 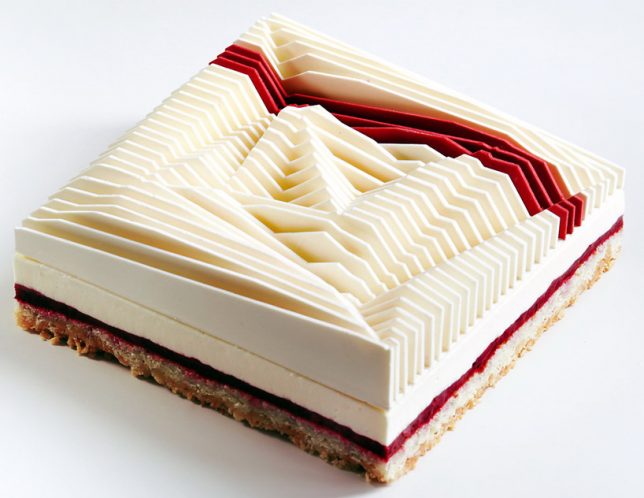 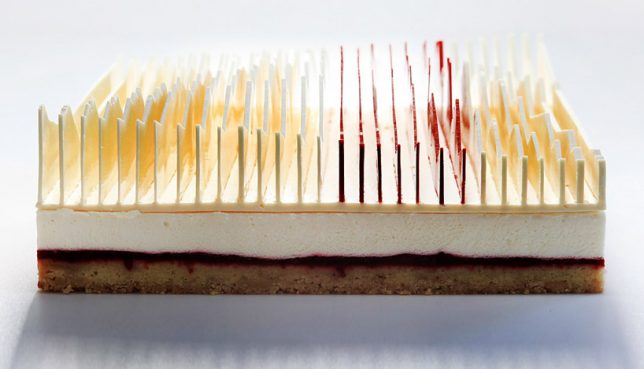 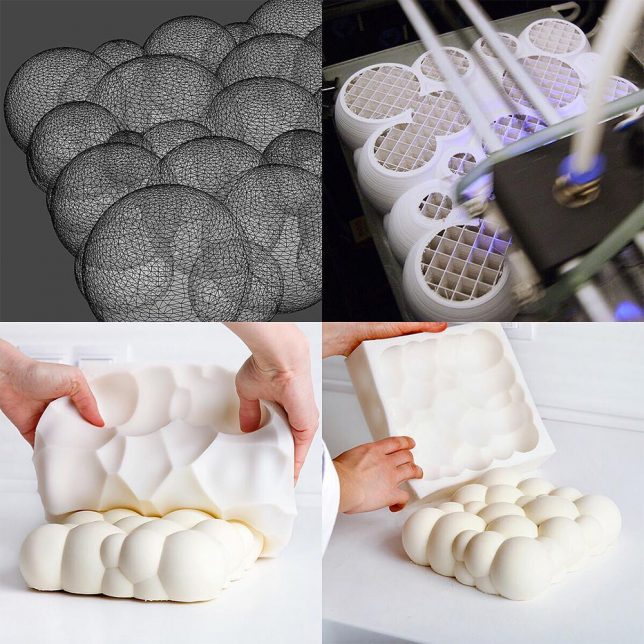 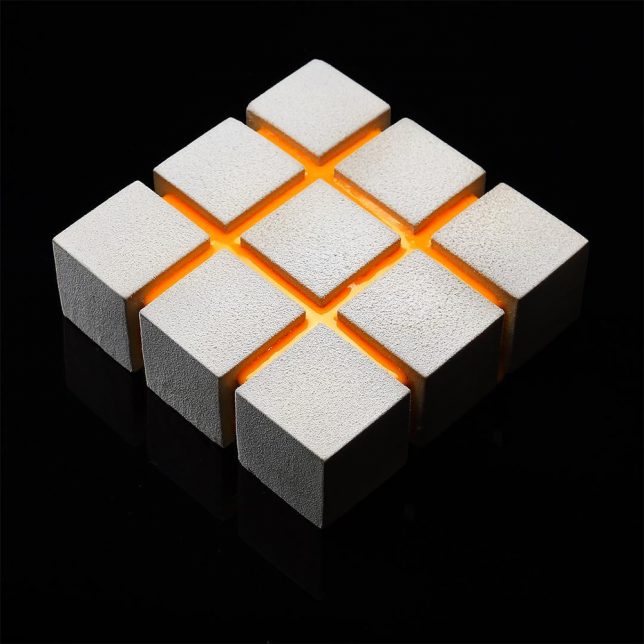 3D-printed molds allow pastry chef Dinara Kasko to make pies, tarts, cakes and other treats with shapes unlike anything you’ve ever seen in a dessert case before. Her latest is a collaboration with artist Jose Margulis, a series of delicious-looking cakes inspired by kinetic waves. They’re made of ingredients like almond sponge cake, yogurt mousse, mascarpone and streusel. Older works include ‘Triangulation,’ a lime-basil cake for SoGood magazine, and ‘The Bubbles,’ which take their inspiration from cells. For the latter, she explains, “I used such geometric constructing principles as triangulation, the Voronoi diagram and biomimicry.” Intrigued? You can buy silicone cake molds from her website and try to recreate these desserts at home.

Geometric Patterns Inside a Cylinder of Chocolate 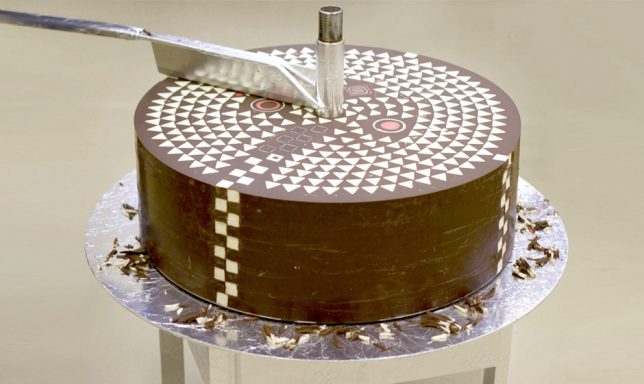 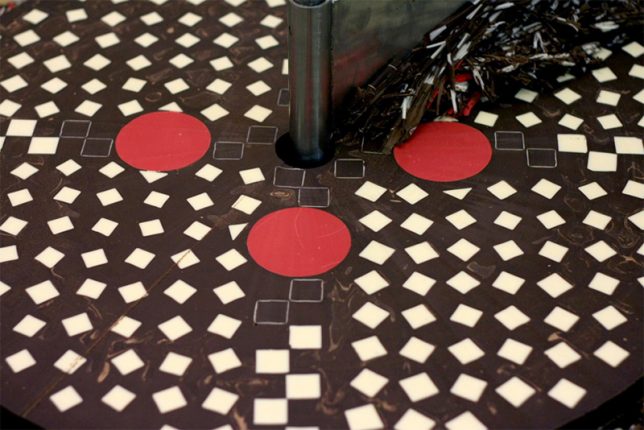 Geometric patterns hidden within a solid cylinder of chocolate are slowly revealed by a blade on a mill. Studio Wieki Somers teamed up with chocolatier Rafael Mutter to create this installation for Vitra Design Museum, displayed at Art Basel in 2012 for a retrospective of dutch furniture designer and architect Gerrit Rietveld. The patterns continuously change the deeper into the cylinder you go, more complex at times and simpler at others, but always mathematical in nature. 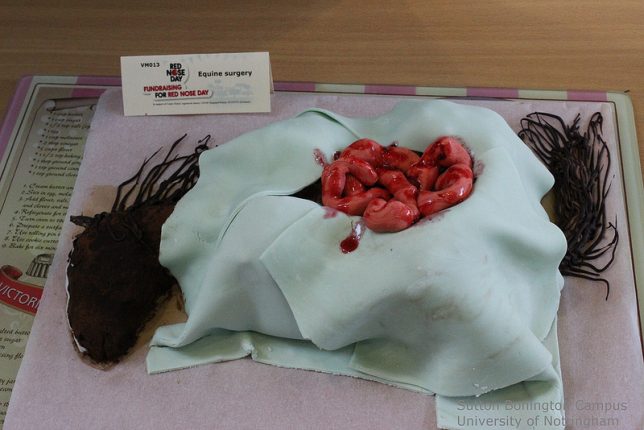 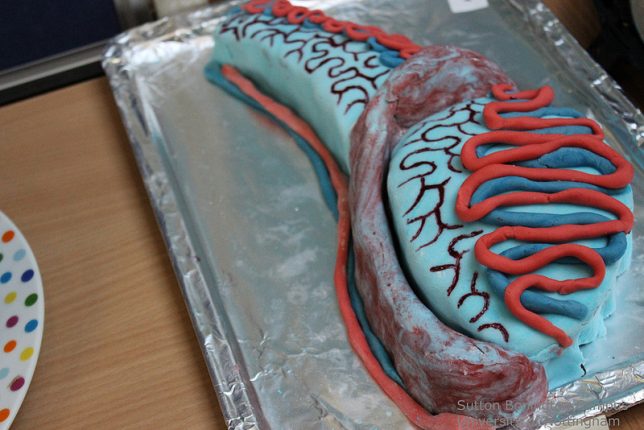 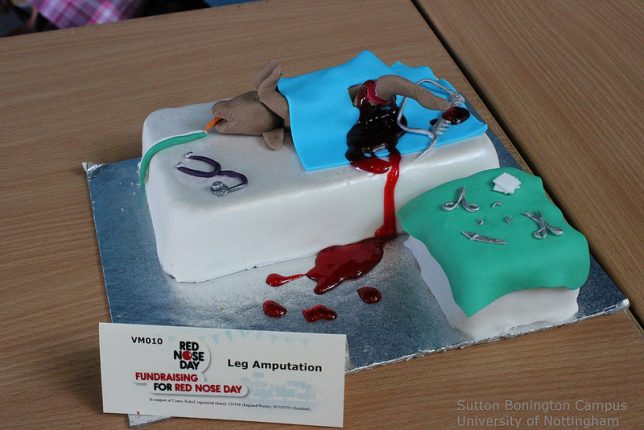 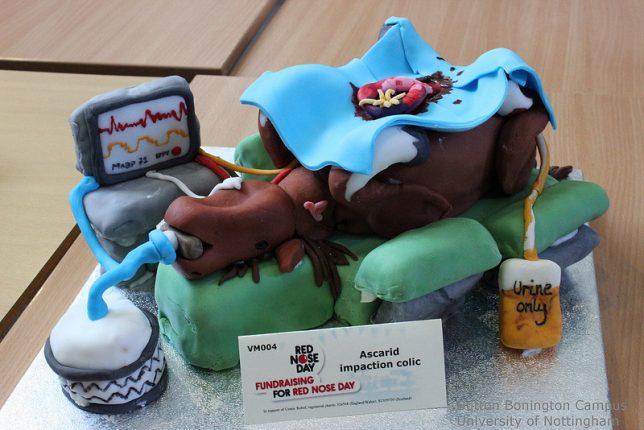 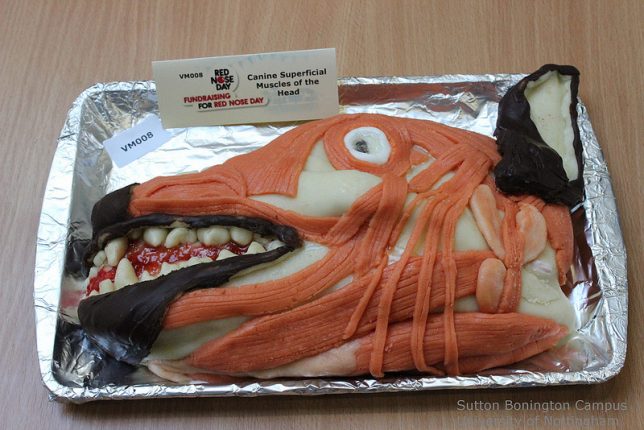 This one’s for the veterinarians out there. One student at the Nottingham Veterinary School created this semi-realistic model of a canine’s superficial head muscles in cake form as part of a fundraiser; another rendered a dog testicle, while a third portrayed a leg amputation in edible form. There’s also equine surgery, and an ‘ascarid impaction colic,’ a procedure to get rid of a severe worm infestation in horses. Looks tasty, huh? 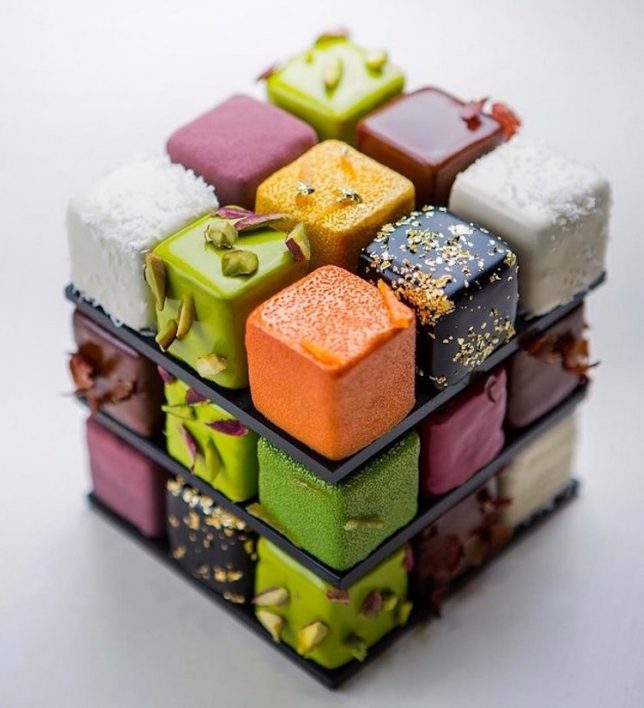 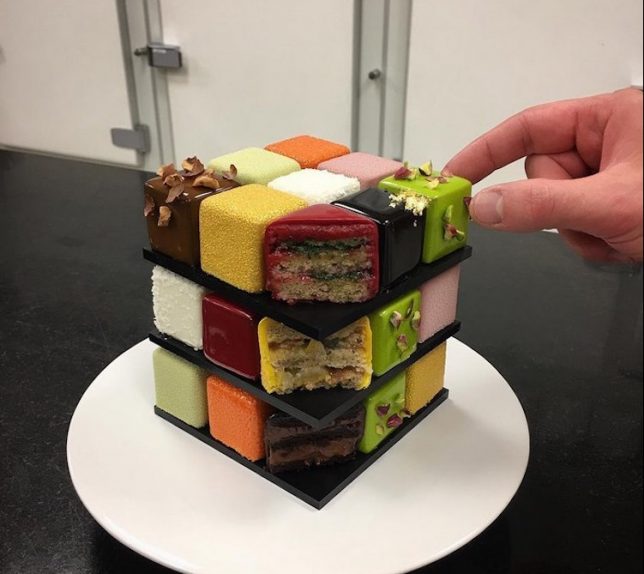 French pastry chef Cedric Grolet offers a unique edible spin on the Rubik’s cube in the form of 27 individual pastries. Though he’s spurned the handheld puzzle’s usual primary colors for muted pastels, the object remains recognizable in form. You can purchase one of these cakes at Le Dali, a restaurant inside the Le Meurice Hotel in Paris. 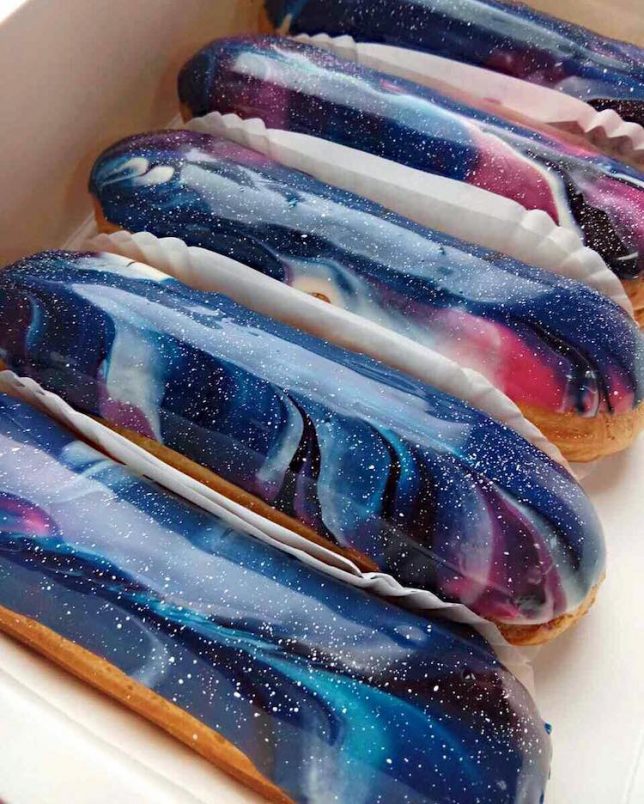 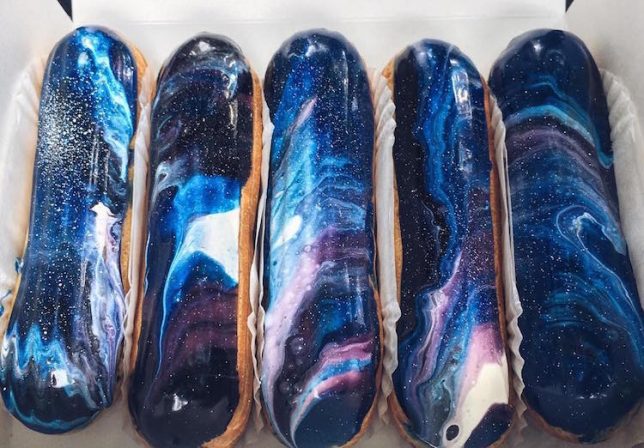 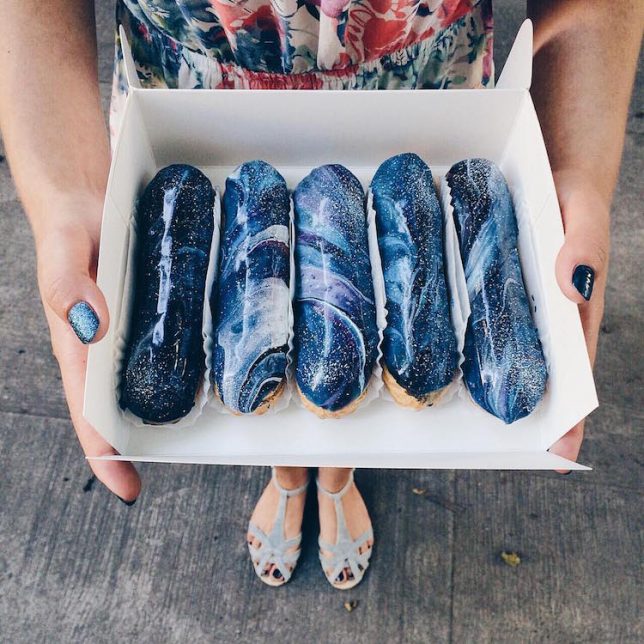 Looking like something straight out of NASA’s stunning satellite imagery of space, these cosmic eclairs by Musse Confectionery in Ukraine are truly out of this world. The glaze swirls together hues of blue, purple, pink and white for results so beautiful they’d almost be hard to eat (except that they look delicious.) The chef took inspiration from Hubble Space Telescope photos, offering the eclairs in flavors like raspberry, vanilla, pistachio, salted caramel and chocolate. They’re available in the confectionery’s shop in Kiev.