This ‘Exclusive Limo’ based on Chrysler’s late and unlamented PT Cruiser was designed to transport Russian about-to-be-weds in, er, style. 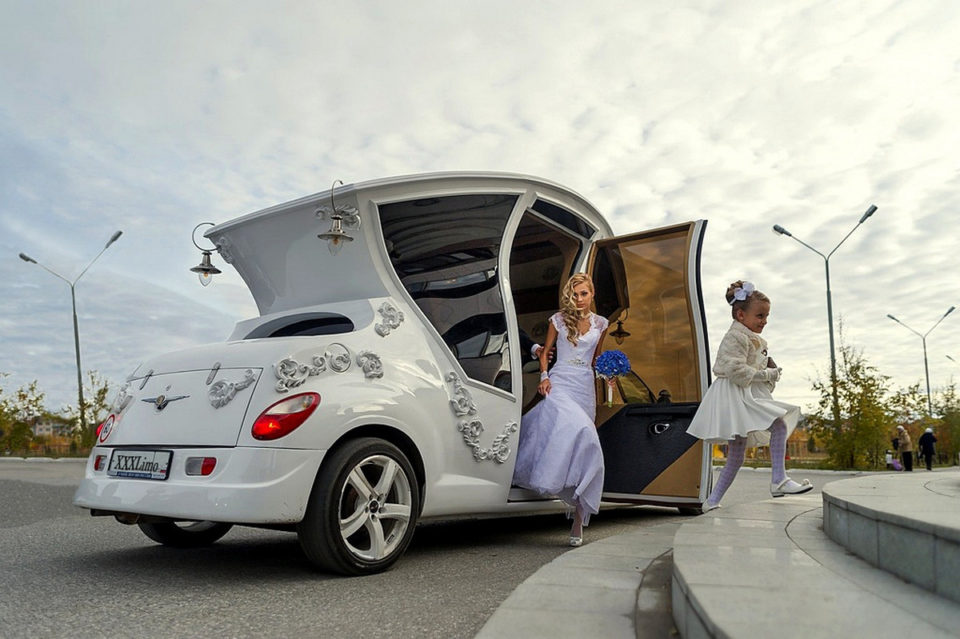 You had one job, wedding coach designer… and you succeeded, though at what cost? We’re not talking about the bushel baskets full of rubles that must have been poured into this project. Oh no… it’s the cost to everyone involved – from manufacturer to operator to user – in terms of their presumably hard-earned reputations. 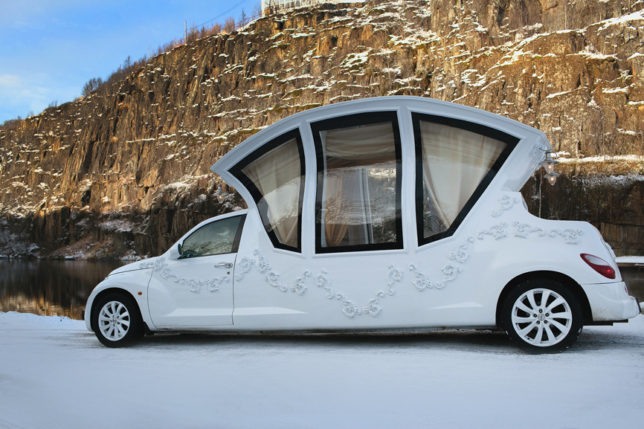 OK, maybe we’re being a tad harsh. Maybe it’s unfair to focus on someone’s or something’s “humble” origins instead of heaping praise upon what they or it has become. Even the ugliest duckling transforms into a graceful, dignified swan; even the creepiest of crawling caterpillars metamorphoses into a glittering, beautiful butterfly. Yeah, good for them: this baroque-ass wedding cake on wheels was once a PT Cruiser and that particular road apple hasn’t fallen too far from the ugly tree, hitting every branch on the way down. 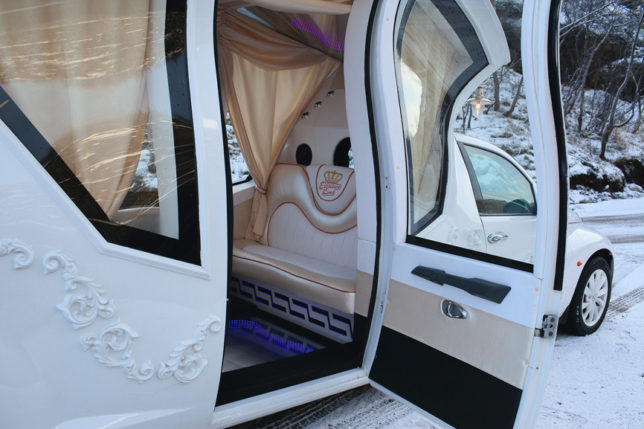 Supposedly this hair-raising honeymoon coach was customized in the Ukraine. PT Cruisers were manufactured at the Eurostar Automobilwerk in Graz, Austria, during 2002 and were available with a 2.2-liter inline four-cylinder diesel engine built by Mercedes Benz, so it’s got that going for it, which is nice. The Benz-iness stops right there, unfortunately. 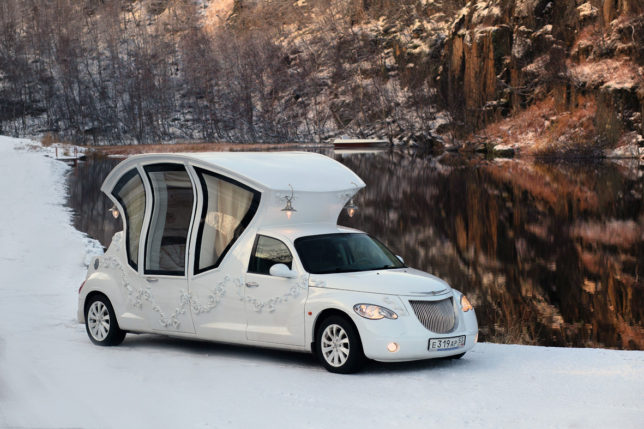 On the bright side, the manufacturer went the extra mile to ensure Mopar’s retro road machine kept its truckish origins under wraps… or should we say, under multiple layers of leather, vinyl, drapery and polished wood. An integrated minibar serves to raise the spirits of the passengers, up to six of whom can be accommodated within the vehicle’s bloated central “coach” section. 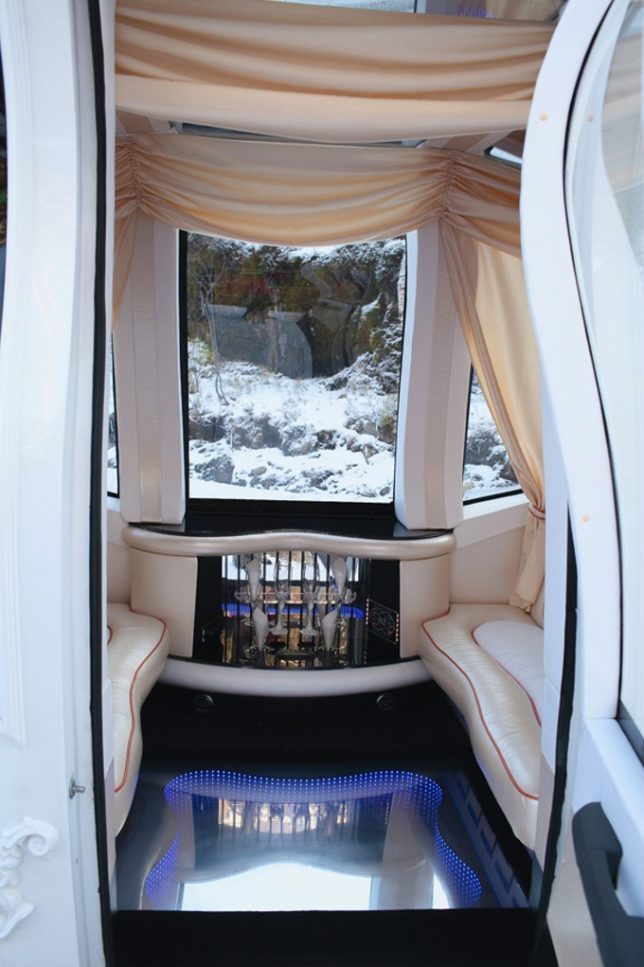 Speaking of coachwork, dig those funky brass-age (though brass-less) lanterns hanging off the roughly trapezoidal guest compartment – freeway cruising is not recommended. The spacious central section and its walk-in doors feature some alarmingly curved glass – sources don’t state it but we have to assume they’re acrylic plastic. One would hope the transparent floor insert is composed of more substantial material. 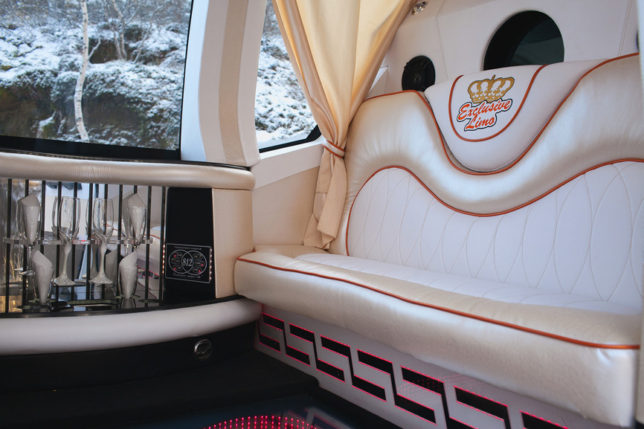 The upholstery is embossed with the name of the owner/operator, Exclusive Limo, who at the very least can’t be accused of misleading advertising. Two short videos (here and here) showing this unique bridezilla-mobile in action are watermarked with the company’s name as well. 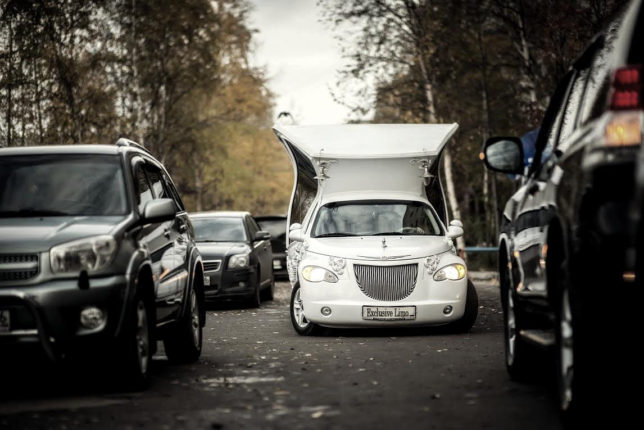 As far as the uniqueness factor goes, there may be more than one PT Cruiser honeymoon coach working the wedding circuit in the former Soviet Union. The vehicle appears to sport different wheels and/or hubcaps in some photos. As well, the coach flaunts an Art Deco-ish chromed hood ornament in some views while other images show no ornament. 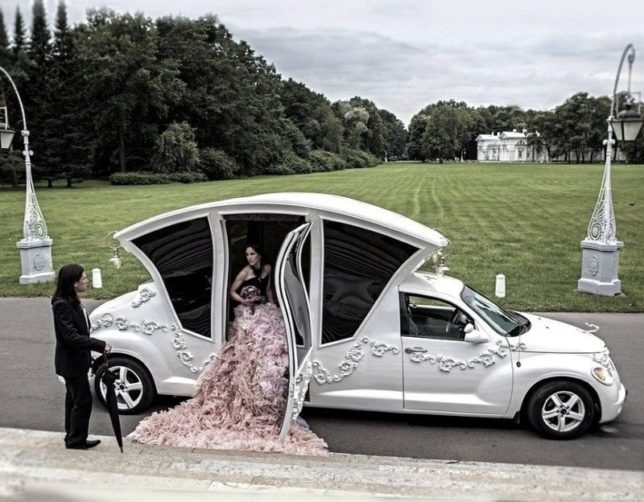 It’s quite possible the (or these) PT Cruiser wedding coach’s appearance has been modified over time, along with necessary mechanical maintenance performed over the years. And yes, we said “years” – the coaches have been snapped in action as recently as January of 2017. Nice to see today’s Russians are still Putin on the ritz when it comes time to put a ring on it.