Best known for his vivid geometric murals full of fantastical animals, which brighten up everything from derelict churches to fleets of freighters, street artist Okuda San Miguel has crafted a massive 3D sculptural centerpiece for the annual Fallas celebration in Valencia, Spain. The 100-foot-tall cardboard sculpture stood for just four days before it was ritualistically burned, along with the rest of the art created for the festival, in a celebration of ephemeral human achievements. 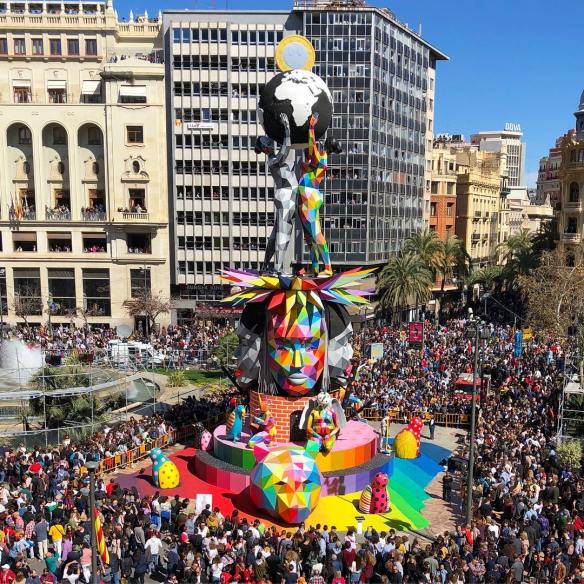 The festival, honoring Saint Joseph, sees three million visitors descend upon a city of one million to dance, celebrate the beginning of Spring, drink sangria in the streets and watch a bunch of things burn. Among the sculptural ‘sacrifices’ are traditionally a series of giant ‘ninots’ (puppets or dolls) including satirical figures. This year, it was Donald Trump, Vladimir Putin and Kim Jong Un. Just before midnight on ‘La Crema,’ the last day of the festival, the crowds begin changing and the streetlights are turned off before fireworks explode and everything is set ablaze.

Asked by El Periodico before the festival whether he was ready to see the piece burn, Okuda said, “No I’m not. I think I’m going to have a sentimental craze, because it’s the most amazing piece I’ve done in 3D and I’m freaking out with every piece that comes out. I’m going to cry. With the cool thing that we have built, I’m sure I will not understand very well that it’s going to burn, but I think the millions of people who are around this and who have such a strong feeling will make me understand.”

“This is one of the great traditional festivals of Spain because, to start, it’s art, it’s not just bulls running and I do not know what. Fallas are constructions that artisans make for a year and with a history of more than a century. I find it incredible.”