These closed and abandoned pet shops eerily echo with the long lost sights, sounds and smells (oh, those smells!) of what were effectively urban retail zoos. 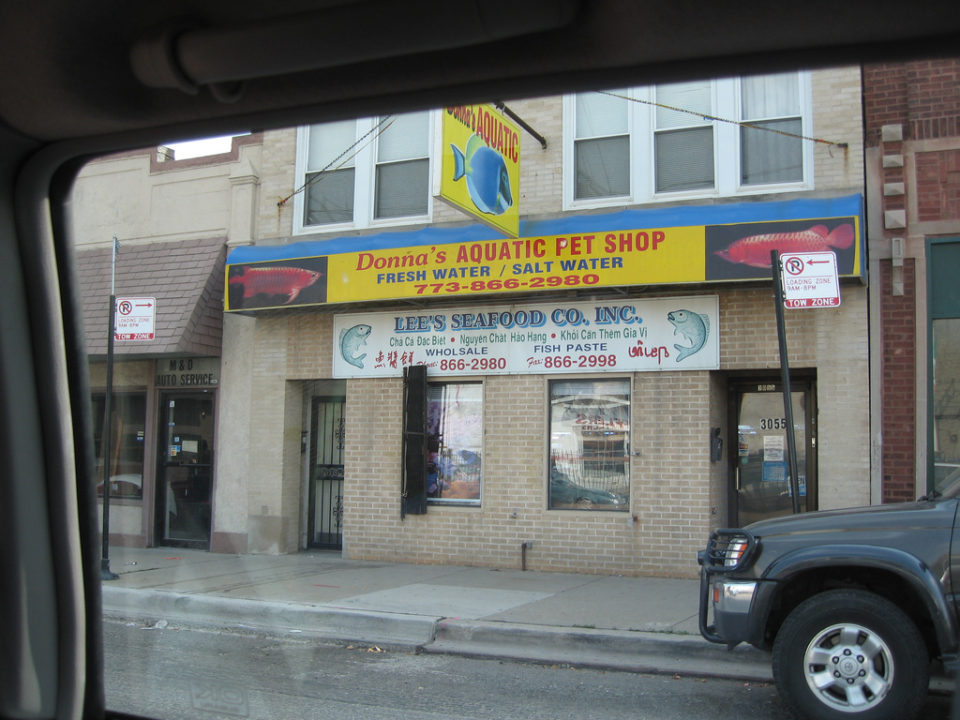 It’s a pet shop, it’s a seafood store, it’s… both? It would appear so! Sure, Donna’s Aquatic Pet Shop and Lee’s Seafood Co., Inc may sport different signs but, as Flickr member Fuzzy Gerdes‘ horrified friend Erica reportedly and repeatedly shouted, “It’s the same phone number!” Our lead image of the fenced-over Chicago store(s) dates from April of 2008 while the second photo from Flickr member crowbert depicts a slightly more active scene from a couple of years previous. 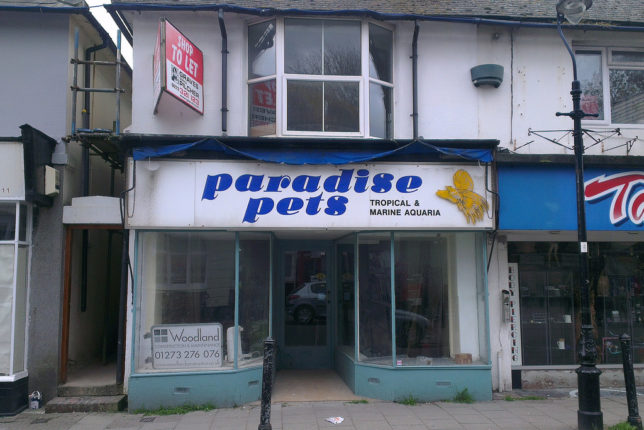 The hell is an “aquaria”? Also, shouldn’t that golden creature on the sign be a fish and not a bird? Looks like a “screaming chicken” from a Trans-Am’s hood ended up as roadkill and was painted over by a lane-line paint truck. So much for this broke-ass Bird of Paradise… Paradise Pets, to be exact. Flickr member Jon Southcoasting captured the closed not-quite-fish-or-fowl shop from Shoreham-by-Sea, UK, in April of 2014. 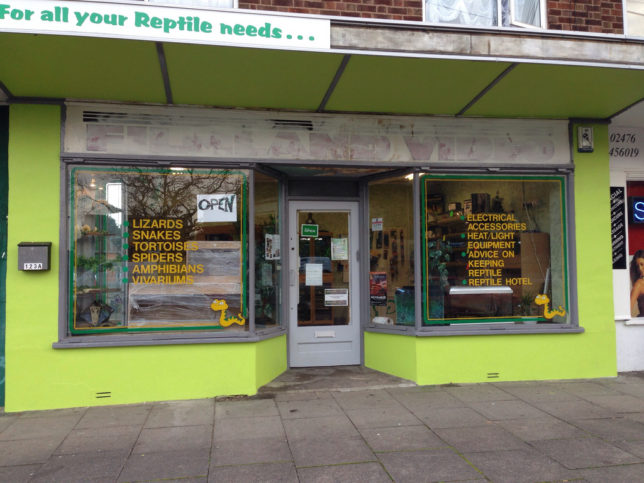 Much like a snake shedding its skin, Godiva Reptiles in Coventry, UK seems to be sloughing off its signage to reveal – no, not its final form – a previous incarnation as a video rental store. Unlike the apocryphal serpent, however, the sign’s piecemeal decomposition was a harbinger of things to come. According to photographer and Flickr member Hazel Nicholson, “As of May 2017 the shop has closed down and the former owner has been found guilty of trading without a licence.” Guess the most important “reptile need” is a license to trade in reptiles. Who knew? 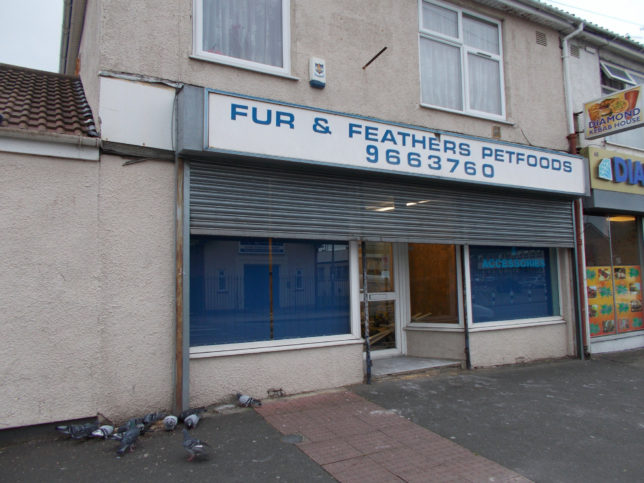 According to photographer and Flickr member shrinkin’violet, “the number 9 in the telephone number on the signage is different from the rest. This was probably added after 1995 when Bristol received the new area code.” In related news, this rather bland “petfoods” (is that even a word?) shop in beautiful downtown Bristol, UK, managed to stay in business for well over 20 years. Still plenty of fur-lorn feathered customers (or freeloaders) hanging around outside the shop, though. Sorry, Fur & Feathers, but the pet store longevity prize goes to the former Zoohaus-Altrock, a pet shop in Wiesbaden, Germany. From 1919 to 2011 – an incredible span of 92 years – Zoohaus-Altrock pet shop supplied the local Hessians with “erlebniswelt heimtiere” (“adventure world pets”) typified by the intrepid tuxedo kitty doing an adventurous spider-cat imitation just to the right of the sign. Flickr member Arjan Richter snapped the shop’s charming two-piece (three, including the cat) signage in March of 2011. 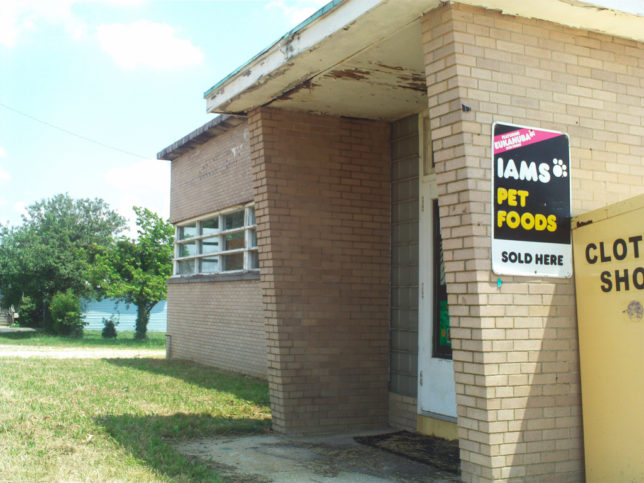 Ah, the pride of Pittsgrove Township… seriously, that is one sharp shop! From the outwardly-angled brickwork buttresses framing the store entrance to the snazzy Mid-century Modern eggcrate-grill window framing, this shop has got it all. Well, except for a tenant, of course. Flickr member Thomas captured this former Jersey store (near what appears to be a Jersey shore) in June of 2008. 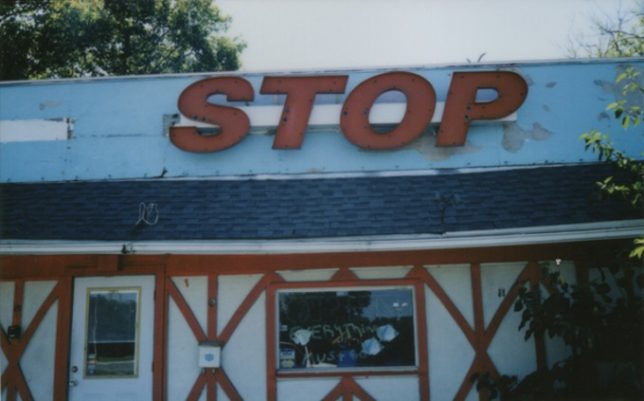 STOP me before I sell pets again… or buy POTS back from previous customers, whatever. Kudos to Flickr member Victor Reynolds for posting an explanation: it seems the store’s original name was “PET STOP” but once the store stopped selling pets, they removed the “PET” from the sign. You’ll find this abandoned pet shop in Pohatcong, New Jersey, where the photographer stopped to snap the sign in the summer of 2015.