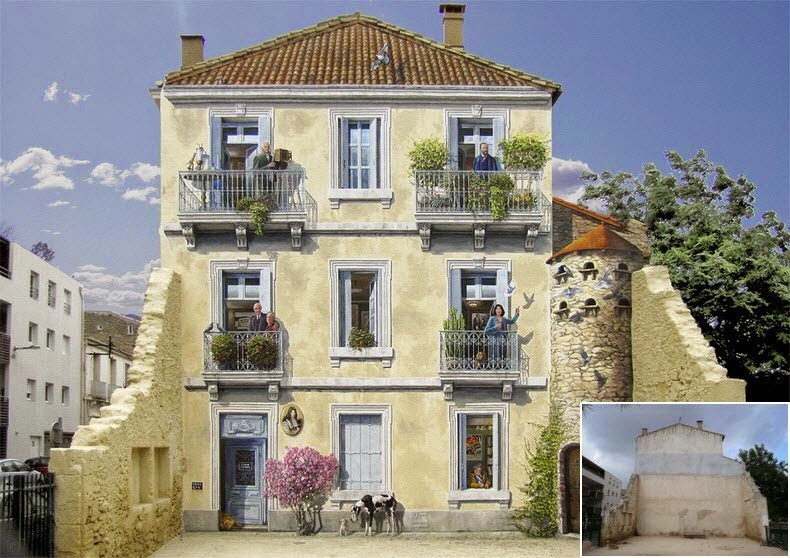 The world is full of architectural fake overs, from individual facades to entire buildings designed to look like something other than what they really are. Historically, some of these disguises have been less well-intentioned than others. During World War II, Nazis gave the Red Cross access to a concentration camp but they controlled the experience, putting up false fronts to make it seem more humane. Along similarly duplicitous lines, Venezuelan President Hugo Chávez reportedly had workers paint the bottoms of potholes along the routes taken by foreign dignitaries to disguise the degree of road disrepair. 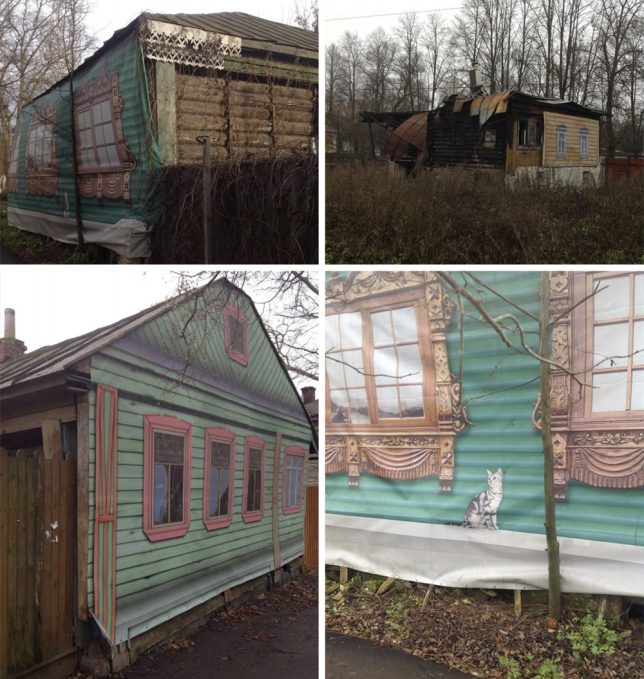 When President Vladimir Putin was scheduled to visit a largely abandoned town, entire vernacular facade-covering banners were hung over rundown building exteriors. Colorful faux painted walls, windows and even cats were draped over the sides of derelict structures. Some of these quirky examples may sound outdated or limited to extreme regimes, but similar trickery can be found around the world. In anticipation of an upcoming G8 summit in 2013, for instance, closed storefront windows in Enniskillen, Northern Ireland were populated with images depicting open businesses stocked with goods, an illusion set up to impress visitors. 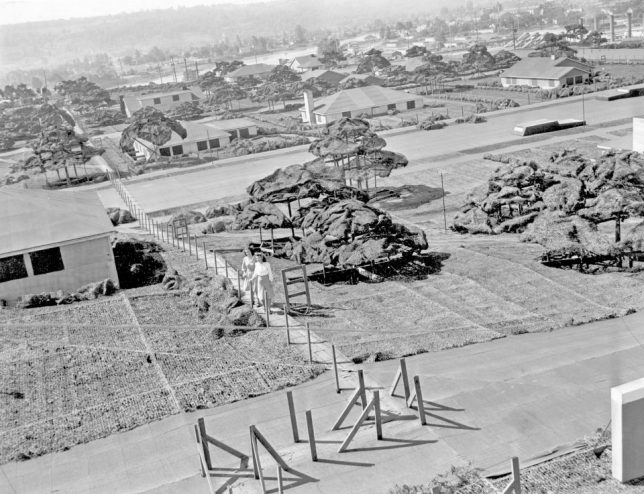 Sometimes, subterfuge is about making something look better, a kind of economic camouflage, but it can also be about political or military concealment. In World War II, a the entire rooftop of a Seattle airplane manufacturing plant was covered with a fake suburb complete with plywood streets, sidewalks, trees and houses. This elaborate deception was erected to conceal a vital piece of wartime infrastructure, confusing potential enemy spy planes and bombers that might pass overhead. In hindsight, attacks on the American mainland might sound improbable, but in the wake of the Pearl Harbor attack the people in power were taking no chances. 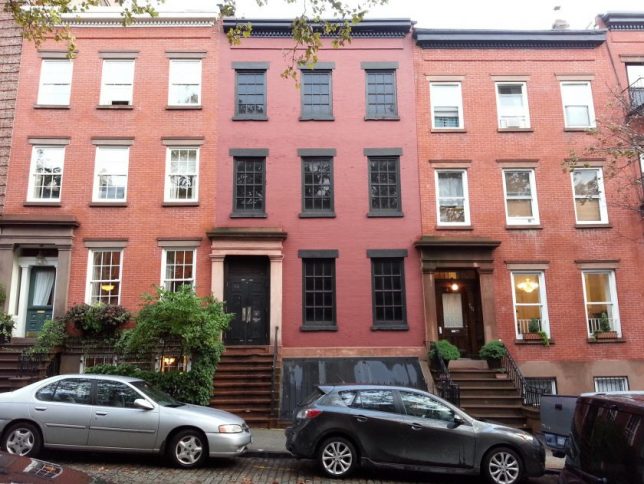 Many misleading designs are less elaborate but also far more prevalent than most people realize. Hiding in plain sight in cities like New York, London, Paris and Toronto, among others, some architectural facades have been used to cover up infrastructure including sewer and subway exhaust vents. In other cases, entire fake buildings have been built as shells around around facilities like electrical substations. Similar strategies have been employed to reduce the appearance of blight in cities including Cincinnati, Cleveland and Chicago, where fake interior scenes have been applied to boarded-up windows on homes and businesses. 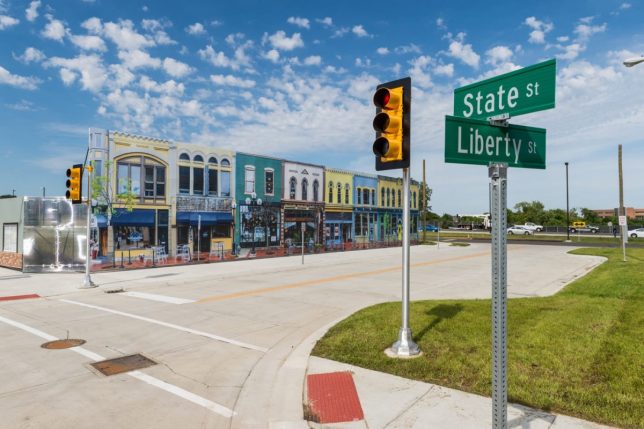 Not all of these fakes are meant to distort reality or create believable illusions. Test track villages in places like Ann Arbor, Michigan, for instance, are used to help study road conditions and try out new autonomous vehicle technologies. 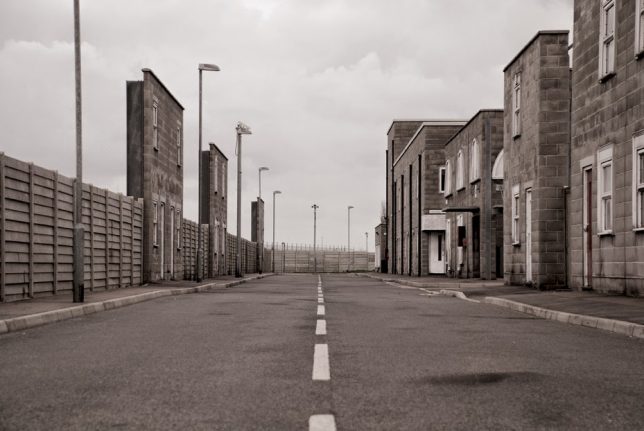 There are also “Hogan’s Alleys” around the world — fake towns made for training police, military and other emergency personnel by setting up simulated crimes, riots and terrorist attacks in semi-realistic built environments. Some of these can be quite detailed, like Survival Town, an entire development complete with furniture and mannequins built simply to be blown in bomb tests. Whatever their particular form and intended level of deception, all of these fake places share a common designation — and so-called “Potemkin Villages” have a strangely compelling origin story.

A Potempkin Village is a false front designed to cover facts with fictions, painting a better picture (literally or otherwise) over the face of a less attractive reality. The name comes from governor Grigory Potemkin who, as the story goes, wanted to impress his former lover, Russian Empress Catherine II, as she toured the Crimean countryside in the wake of war. To win her approval, he concocted one of the craziest architectural plans in history, involving the erection of entire portable villages at various locations along the way. These fake towns would be disassembled when her delegation passed by on a barge and then moved downstream along the Dnieper River to be rapidly reconstructed at the next stop on the route — the changeovers happened while the empress slept. 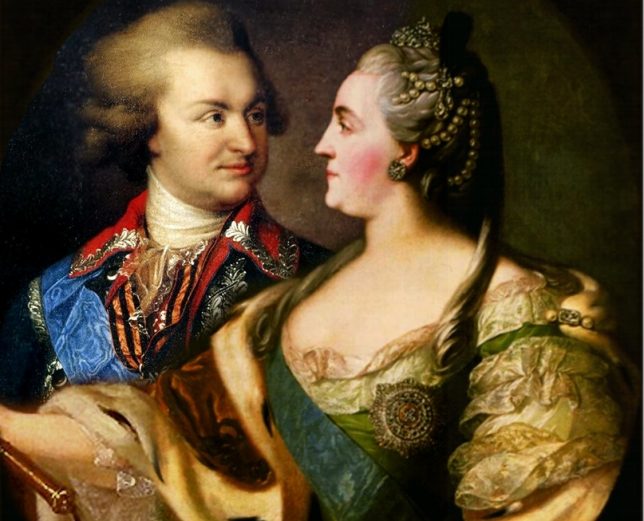 Thus, the same faux buildings would be seen over and over again in new contexts by her highness and other ambassadors. Potempkin’s underlings, meanwhile, would dress up and pretend to live in these places along the way. While it can be hard to disentangle facts from fantasies in this particularly peculiar history, one thing is certain: from these stories arose the idea of the “Potemkin Village,” which came to have political and economic as well as architectural meaning.

Potempkin’s story is extreme, but his motivations are relateable — he was driven by that same desire ordinary people have to make their homes a bit tidier than usual when entertaining guests or that inspires business owners to put slightly idealized versions of their wares upfront on display. The difference is arguably one of scale and degree, and his position of power and authority enabled him to take things further. In the realm of international economics, politics, business and military operations, such deceptions can indeed become massive, surreal and in rare cases are persistently maintained, even when people know a place is fake.

Perhaps the most sizable and strange contemporary example is the village of Kijong-dong, located near the Korean Demilitarized Zone. To understand this place, though, one needs to first understand the context in which it was constructed. 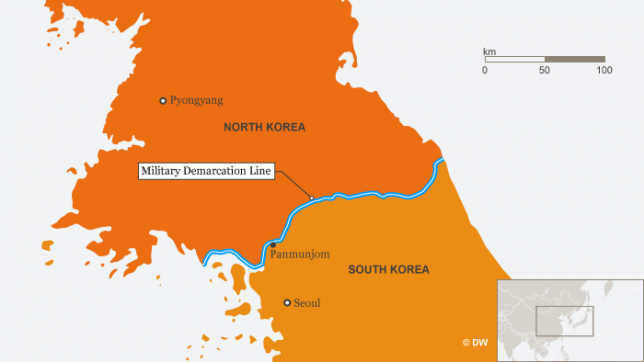 The Republic of Korea (South Korea) and the Democratic People’s Republic of Korea (North Korea) have effectively been at war for over 60 years. The Korean Armistice Agreement brought an end to the active hostilities of the Korean War in 1953, but it was only meant to be a temporary measure. Absent a more permanent settlement, the conflict technically remains open-ended. The resulting KMZ spans 160 miles from coast to coast and is 2.5 miles wide with the Military Demarcation Line running down the center. To this day, the border between remains one of the most militarized in the world as both sides claim the right to govern the whole Korean peninsula. Along the border, both North and South Korea maintain “peace villages,” each of which is peculiar in its own way.

On the south side, residents of Daeseong-dong live tax-free and exempt from military service. The place may seem a bit artificial, but it has real residents living out their real lives. On the north side, the situation appears much stranger — even at a glance, Kijong-dong looks conspicuously luxurious for a rural North Korean town. Interior lights turn on and off at set times while street-sweeping caretakers and other “citizens” are positioned to make it look occupied. “Farmers” show up during the day but depart at night rather than heading into one of the “buildings” where people might be expected to live. 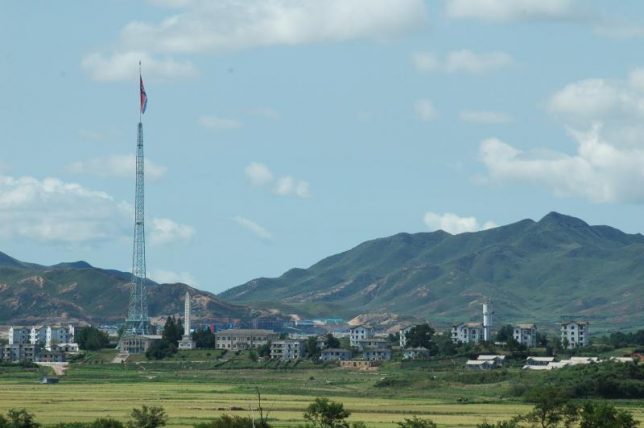 North Korea is well known for guiding visitors through particular routes of its capital city and controlling the experience of travelers to the country, but Kijong-dong takes this kind of coercive deception to the next level, staging an entire town for display complete with a support cast and crew. However real and fake modern accounts of Potempkin’s historical efforts may be, he would presumably at least be impressed by the effort.